Got magic? Maybe she was born with it...

As seen in
Demons Drink Coffee
Every wizard is innately capable of casting spells from any discipline of magic, but their soul is associated most strongly with a particular kind of magic. Magical theorists are unsure whether this is an innate trait established at birth or is alterable up to the point of magical training, but long-term attunement testing of students in the Aemark Kingdom indicates that the association does not fundamentally change over time. In rare cases, an individual may have a dual attunement, but the overwhelming majority of magically-inclined persons have a single attunement. No examples of triple attunement have ever been recorded. 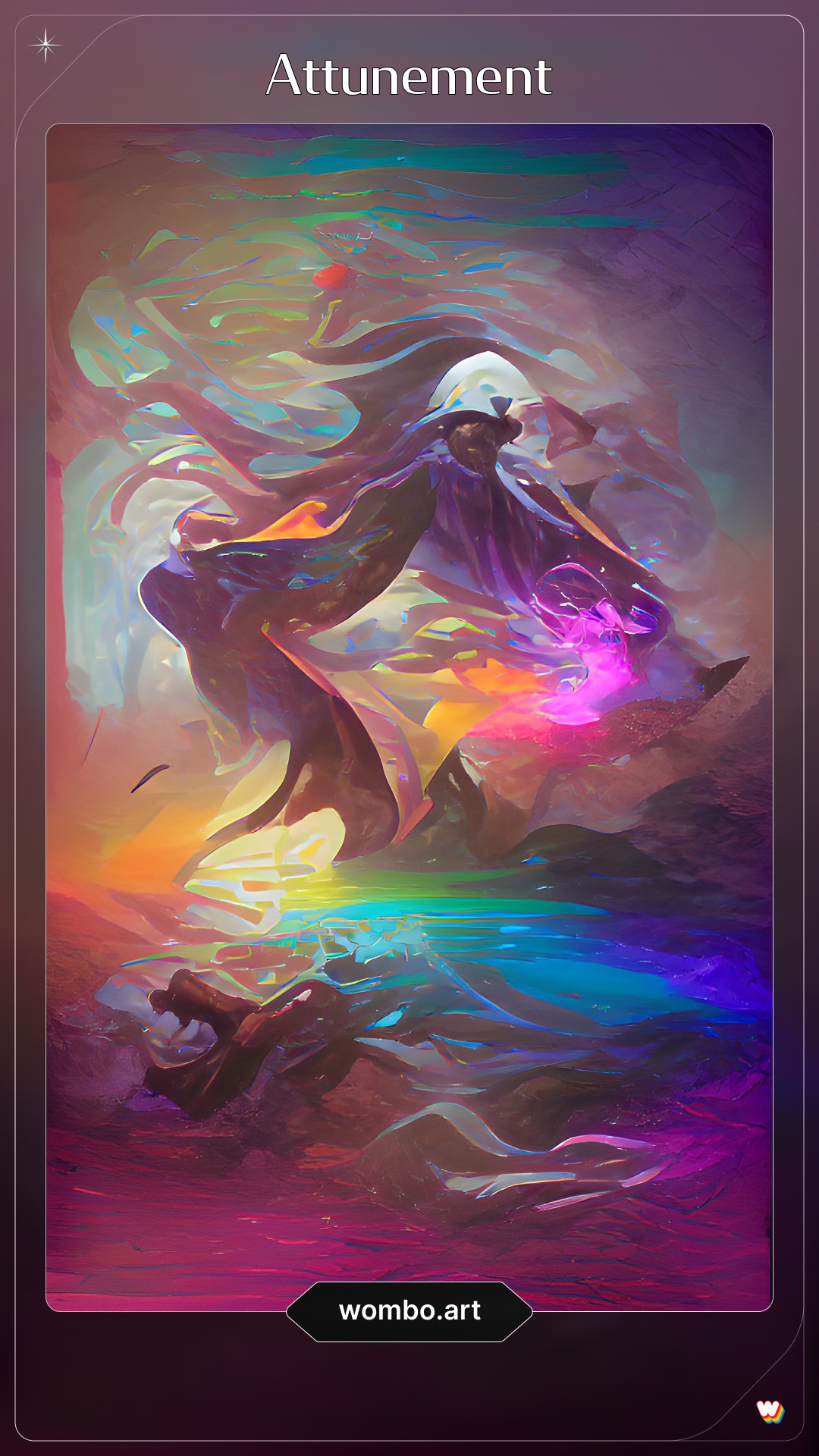 Attunement by Wombo ("Spectrum Wizard Soul Magic")
The leading theory on attunement states the mana flow of the wizard's body and soul dictates the discipline to which they are attuned. Utilizing the natural inclination of the wizard's mana leads to faster skill development, greater casting aptitude, more potent spells, and lower mana expenditure. Invoking spells of other disciplines is quite possible (and common for cantrips), but is less mana-efficient, more mentally taxing, and results in a comparatively weaker spell overall. Through practice, and guidance from a wizard skilled in the appropriate discipline, wizards can improve all three aspects across disciplines.   Scholars believe the increased mana consumption comes from forcing a change in the wizard's internal mana flow. In the same way that bending metal pipes incurs significant physical effort, altering the flow of mana requires significant magical effort. Energy must be expended to modify the pathways to the correct configuration and enable the spell to progress appropriately. Mishaps in reconfiguration result in physical pain, manifesting in sensations ranging from the innocuous, like a tingle, to the severe, such as a burning sensation. Aemark Academies build their curriculums around minimizing the usage of secondary disciplines, excepting cantrips, until students reach their third year.   Mental focus is obviously required to change the wizard's natural state and can be a burden depending on how poorly they are attuned to the casting discipline. The further the discipline is away from the primary attunement, such as casting from a separate school of magic, the more challenging it is to configure the mana pathways. For example, creators (those who specialize in creation magic from the conjuration school) have a difficult time casting hex magic spells (a law discipline) and vice versa. Headaches are common among students learning to cast the antipode of their attunement (antipodes are the most frequent choice in secondary discipline due to being 'familiar') and more serious mental distress can arise from casting outside of the wizard's preferred school.   Cantrips are largely immune from the harmful effects of cross-discipline casting. In fact, wizards begin their education by learning a variety of useful cantrips designed to make daily life easier. This ranges from small-scale pyromancy to light candles to cosmetic applications to minor hexes reducing sun glare. The 'casual magic' wizards learn, while basic, may be the most impactful spells they will ever use.

In exceptional cases, a wizard can be attuned to two separate disciplines. Theorists have not uncovered a cause, though some have proposed fringe theories regarding celestial alignment, climatology, and birth circumstances as potential sources. None of these are generally held beliefs among the magical community, who prefer to believe that basic chance can result in extraordinary results. Because of their rarity, dual-attuned wizards are given special treatment, tracked by the Kingdom Academies (and the Kaokut Coalition and Al'Orphic Alliance), and are usually provided with full scholarships to an Academy of their choice. Further, the Kingdom goes out of its way to ensure dual-attuned wizards are loyal to the Kingdom because defections could give rise to high-risk, hostile military assets.   Sheyla Enelladalcol Aeleat is an example of a dual-attuned wizard, specifically attuned to both summoning and pyromancy. Dual attunements across two schools of magic, such as Sheyla's, are even rarer and make for a potent wizard, though their capability depends heavily on the relative skill of the individual. Simply because a wizard is dual-attuned does not mean they have the time, mana, or talent to maintain sufficient aptitude in multiple disciplines. Frequently, these wizards are strongest in one of their two attunements and utilize the other as an augment to their primary.   While theorized, there are no recorded examples of true triple attunement. Some elder elven wizards have displayed incredible proficiency in wielding three, or more, disciplines of magic across more than one school, but from first-person accounts, these skills are honed through pateience and devotion to the craft rather than from a natural attunement. Elven wizards, being considerably more long-lived than humans or Al'Orphics, are the only ones who have displayed sufficient ability, power, and ease of casting to be mistaken for a triple attunement.

Unlike humanoids, demonkind are near-universally capable of spellcasting, but are more narrow in their capabilities than humanoids (when considering the population as a whole). Scholars who have aggregated the records from warlocks spanning the past 1,500 years have noted a decline over time in the variety of disciplines demons utilize (for unknown reasons), but even today the rate of transformation magic among demons is in excess of ninety percent (92% according to the most recent figures from the Warlock's Registry [WR]). Similarly, hex magic capability is over eighty percent (84%; WR). Further disciplines fall precipitously from there, with pyromancy represented in just seven percent of demons.   Magical theorists speculate that demons, should they have attunements at all, are all born with an attunement to transformation magic and adopt hex magic over the course of their lives to survive in the hostile and unforgiving Realms. Hex magic is the most closely matched with transformation outside of the school of conjuration (no indications show that demons have summoning capability) and could be critical in the development of a demon's sphere of influence in the Realms, especially those wielding power over other demons. It is suspected that demons are born with no more or fewer attunements than humanoids and merely develop a broader set of casting skills due to their longevity, which is believed to span millenia.

Think you're a wizard? Sporadically cause your coffee to ice over? We've got you covered! For the cost of just a small horse, we can test your attunement (five-to-six week delivery time).   You know, Academies will do it for free...