As seen in
Demons Drink Coffee
Sometimes called by its unofficial name 'enchantment,' transmutation is an eminently useful conjuration discipline, but only in combination with other magic. Enchanters are highly sought by other specialists and rarely see great prestige due to their subtle, flairless spellcasting. Transmutation's antipode is transformation. Practitioners of the art regularly receive contracts as market demand for transmutation services always exceeds supply. The Aemark Kingdom routinely provides full scholarships to aspiring wizards with a transmutation attunement and significant stipends to those learning transmutation as a secondary discipline. 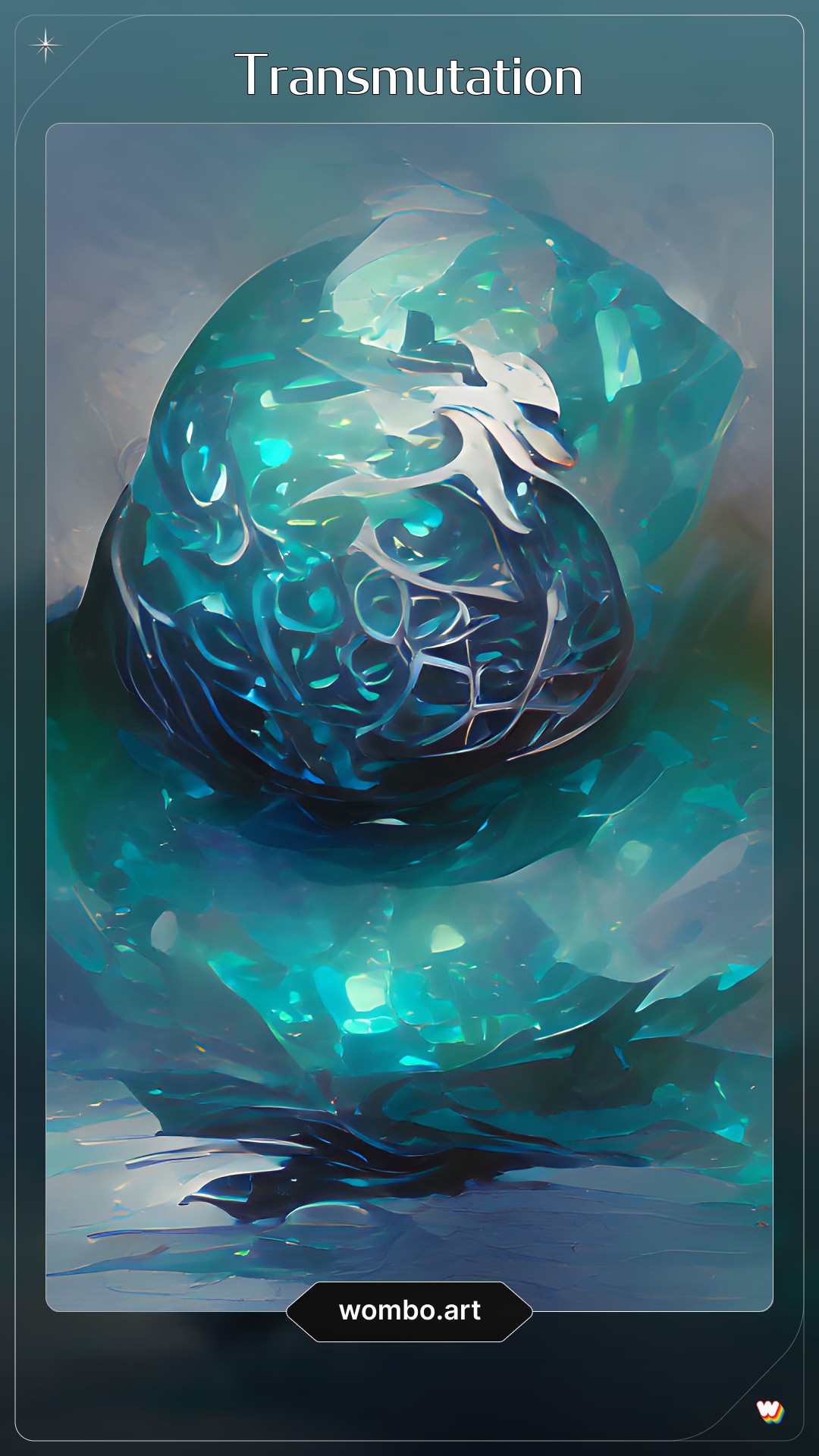 Transmutation by Wombo ("Imbue Orb
Cerulean Teal Magic")
Creating an appropriate transmutation mana structure is an art rather than an exact science. As such, the process herein is more of a guide than a rigid set of steps. Enchanters start by mimicking a creation spell for the same substance. For this reason, creators are often partnered with enchanters. Some wizards specializing in food preservation adopt the dual-strand, spiraling mana flow for organic substances, but most operate on inorganic material. The caster modifies the mana structure by 'opening it' to accept a spell infusion and prepare it for the second step: suffusing. The ability to 'open' the design is the primary differentiator between transmutation and creation experts.   The suffusion process maps the repeating pattern to the target. Instead of a creation spell where the material is built over time, a transmutation spell builds the mana structure within the substance over time. The formation is conjured to match the original object. A small number of enchanters work with a creator to craft and enchant an item simultaneously. These wizards claim the procedure provides a stronger effect, but there is little evidence of this. As the enchanter completes the suffusion, they hold the structure in place.   A third party typically imbues the object unless the imbuing spell is a cantrip or otherwise minor enchantment. This spell is cast as normal, which could be dangerous for the enchanter, and the material 'draws' it in. Usually, the surrounding area is unaffected by the spell (as long as the caster is capable of holding the structure open). Once the full spell has completed and the target is fully imbued, the enchanter 'clinches' or 'closes' the internal arrangement, sealing the effect. Lastly, the wizard recites the final verbal components dictating the duration of and the triggers for the enchantment.

The Aemark Kingdom, Al'Orphic Alliance, Kaokut Coalition, and Xanthun Empire, in a rare act of international agreement, have all banned transmuting humanoids and animals. The punishment for violation is considerable (Aemark leads in severity with a life sentence and possible execution if performed on a humanoid).   The ban was drafted in response to a cult of self-enchanters that attained considerable power by transmuting their bodies with dangerous elements, damaging their minds and souls (per the accounts of the magical theorists and priests). Their last gathering ended in a massacre when one member attempted a destruction transmutation and instead conjured a stream of destructive mana extending out of their arm. They were sapped of all their mana reserves over time and died, but not before destroying much of a city block and maiming or killing more than one hundred people. The remaining cult members were rounded up and executed by multidisciplinary masters of magic (the only ones capable of consistently matching them in combat).

Conjuration spells require repetition in the verbal component, but transmutation is unique. The repetition for transmutation relates to the shape and design of the mana structure, like creation, but the duration and trigger components are set in the final moments of the chant.

Duration is a significant contributor to the amount of mana required to sustain the enchantment. Longer-lasting enchantments require a greater initial mana input and shorter ones lesser. The difference is immense between short- and long-term results. Thus, enchanters prefer short-duration spells where possible. This leads to excessively high prices for semi-permanent enchantments and far more reasonable costs for others. However, critically, anyone able to manipulate mana can 'recharge' the enchantment (and extend the duration). Wizards often refresh their own items on a daily or weekly basis while non-magical individuals purchase a recharge from a wizard based on immediate need.

The repeated phrases of a transmutation spell adjust the mana structure. As most transmutation spells are cast upon inorganic material, the spell chant determines how the formation repeats and connects to itself. Without the connective portion, only a tiny fragment of the object would be suffused. For enchanters of organic material, the component refines the dual-strand into the proper curvature, loops, and folds.

The enchantment trigger should be easily understood by the user and consistent in application. Triggers range from a gesture to invoke an illusion, to a command word to launch a spell from a wand, to applying heat. The only limit is the enchanter's imagination (or that of the patron commissioning a custom item). Common magic items generally have identical triggers regardless of their origin, for the sake of simplicity and compatibility. For example, almost every timelet activates with a flick of the wrist. In fact, timelets with a different trigger are considered broken or poorly made.

We specialize in complex enchantments on the finest of goods. Guaranteed to last a lifetime, Dragon Heraldry is here to serve and improve your prestige.   It's like they picked two ostentatious words and strung them together without regard to sense. Decent work though.

I dislike binding spells. First, they sound cruel. Second, it depends on prediction, which I suck at.