As seen in
Demons Drink Coffee
There is an old wizard joke describing the inclinations of transformation specialists, called illusionists. Four theorists were debating which of the conjuration disciplines is the most diverse and flexible. The first claimed creation because it brings into being a massive variety of substances applicable to nearly any situation. The second said destruction because whatever creation makes could be easily destroyed. The third argued transmutation, for what other discipline worked with different magics for so many purposes. The fourth theorist used transformation to weave a silence bubble around the three and ate lunch in quiet. Transformation is highly versatile and practical, but maligned as illusionists pursue nefarious, or at least chaotic and mischievous ends. 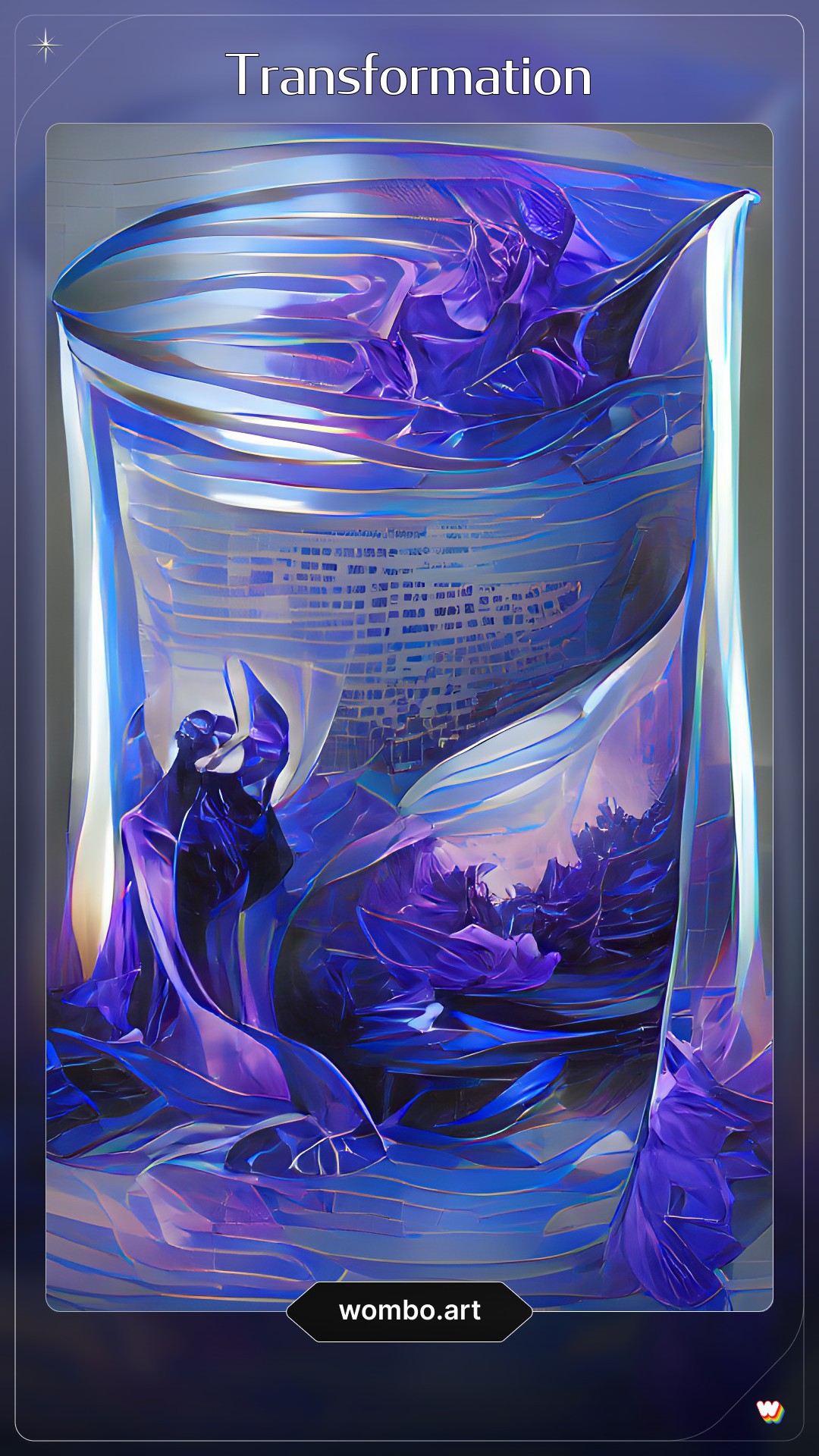 Transformation by Wombo ("Illusion Glass Blue
Purple Magic")
In general, conjuration mana structures are associated with geometry and repetition. The geometry varies by substance, but the manner of repetition is similar across materials. For transformation, the repetition is referred to as the 'weave' of the spell, which is built by continuously looping streams of mana (or 'threads') in an interlocking pattern. Illusionists leverage the mana vectors of the fingertips to conjure multiple threads and lock them together instead of carefully weaving the fibers individually. Illusionists prefer speed over perfection due to the time-sensitivity of most illusion work.   In small-scale illusions (that is, no larger than the average door), the wizard begins by outlining the target area in a thick mana strand. This thicker version is conjured with the palm vector to imbue it with additional mana. When formed, the wizard uses this 'frame' to lash other threads together and prevent unraveling as the spell is woven. Using the vectors in the fingers, they stretch the cords of mana from one edge of the frame to another.   Next, more threads are pulled in the opposite direction as a second layer. Further layers continue to cover the remaining space. With the weave set, the wizard begins the spell's chant to create detailed effects, such as nuanced shapes, colors, texture, and smells. While reciting the chant, the illusionist passes their hands over the weave to inject mana into the portions that require these nuances.   The differences between organic and inorganic transformation mana structures are minimal. Conjuring a narrow or wide weave suited to the purpose of the spell is all that differentiates a basic organic structure from an inorganic one. Wide weaves suit organic substance better and narrow weaves inorganic materials.   Transformation is critically vulnerable to one spell: aether sight. The cantrip, which every trained practitioner learns, allows wizards to see normally invisible states of mana, including illusions. Fortunately for illusionists, aether sight drains mana reserves significantly and no one maintains it indefinitely. Even exceptionally powerful and skilled wizards choose to cast aether sight only when required (or when traps and illusions are suspected).

Conjuration spells, transformation included, require repetition in the verbal component, just like the interlocking weave in an illusion. Depending on available time, a wizard may employ an extensive, long-winded, and slow verbal component as they generate an impressively detailed illusion or a quick chant as one would in combat. The quality of the illusion is proportional to the time investment (assuming otherwise equal skill). Beyond time constraints, artistic ability matters more than raw mana input or other factors.

Outside of entertainment, most illusions are designed to be long-lasting or permanent. The goal is deception and if you can only deceive for a short period, the deception may not have any worth at all. The best possible scenario for a transformation spell is access to an aether current that provides the illusion with a constant trickle of mana. Without such a current, the wizard must inject the spell with a considerable amount of mana during the cast. The mana bleeds out over time and requires recurring maintenance.

The term 'shape' or 'design' does not fully capture transformation's scope. All five major senses can be fooled by a masterful illusion and all are encapsulated under this category. Sight is obviously the first consideration, requiring the illusionist to apply color and texture to trick an observer. Second, the texture should be adjusted to feel right. Contrary to common beliefs, the typical illusion cannot be passed through, but are nonetheless easy to find if not properly textured. (Illusions without any modification are similar to glass.)   Sound is mimicked through density configuration. For example, a false wall should match the density of the surrounding wood or stone. Skillful illusionists tap and listen to both nearby material and the illusion when time permits. The final senses of smell and taste are rarely included. First, scents already disperse from the surroundings and illusions have no distinct odor (unless designed). Second, the average person does not lick something their other senses indicate is normal (and the paranoid have other difficulties separate from finding illusions).

Every illusion has a trigger, even if the wizard neglects to set a unique one. Any illusion that is not modified is undone by speaking 'cancel' while giving attention to the illusion. Different languages, interestingly, all work on the same illusion. Theorists believe the intent of the person matters more than the word itself. When changed, the trigger can be almost anything: another phrase; a series of knocks; a touch; or anything requiring sound, contact, or mana. The standard trigger is a drop of mana placed on the illusion's surface, which serves to keep out non-magical persons or creatures.   Notably, for those wielding magic, it is possible to undo a transformation spell via a counterspell. Compared to other disciplines, illusions are relatively simple to dispel, for both masters and novices. Only a small portion of the illusion needs to loosen from the frame before it collapses entirely.

When you need that extra flair,
Take not a moment to spare.
Knock thrice on our front door,
We'll show you glamours and more.   Finally a good ad. Huh... they didn't put their address in. Classic illusionist...