As seen in
Demons Drink Coffee
The conjuration school of magic is predicated on magical manipulation of matter and substance rather than purely energy. This is either achieved through the creation or destruction of substance, through augmentation of its form via transformation, or by imbuing material with magical energy, referred to as transmutation. The conjuration school is heavily dependent on a wizard's ability to establish an appropriate mana structure and less on mana flow or verbal components. 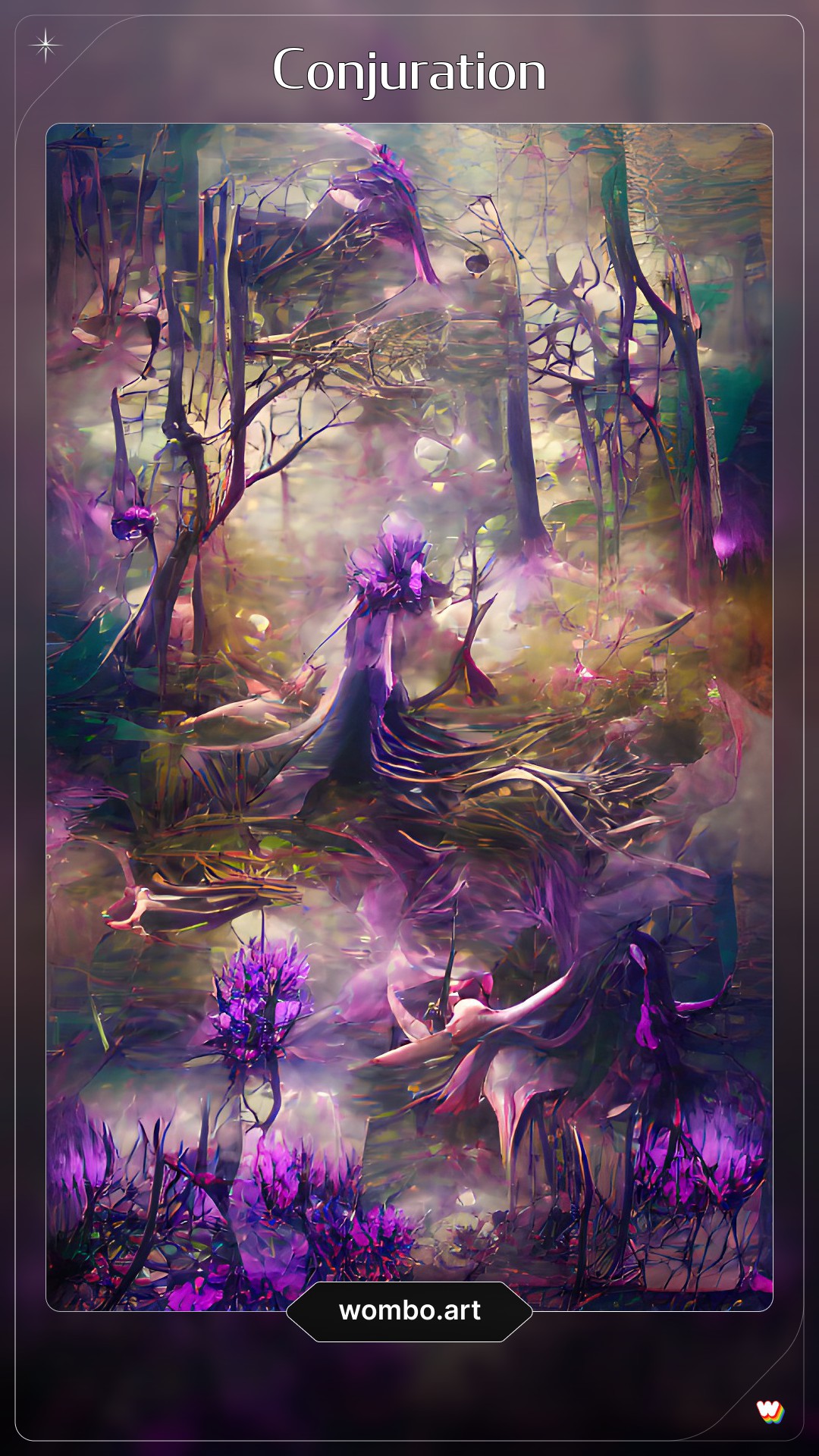 Conjuration by Wombo ("Creation Destruction
Forest Lavender Magic")
While the uninitiated cannot easily fathom mana structures in the same context as a wizard (nor see them using aether sight), attempts have been made to communicate the concepts and have been most successful in describing magic through physical laws. For conjuration, the chief principle is chemistry, both organic and inorganic. Within each of its four disciplines, there is a division between spells that work with organic versus inorganic materials.   In particular, creators working with organic materials are almost always healers, specializing in magical medicine. Some may also become especially accomplished alchemists. Creators specializing in inorganic matter will typically find work in manufacturing and fabrication, tasked with creating challenging components of crafts such as artificing. A common base structure exists for organic spells and a separate one exists for inorganic spells. These structures are extensively modified and fit for purpose.   Generally speaking, the mana structure of the four disciplines is grounded in the following concepts:           The above are only approximations of the intricacy of conjuration magic. The creation discipline is widely regarded as difficult, mentally taxing, and physically draining. Though destruction is equally challenging to perfect, a lack of precision or suitable design will usually result in the desired effect: destruction; just not via the intended method (and potentially across a larger area). By contrast, when creation spells are poorly cast, they can manifest as anything from minor imperfections to a damaging burst of energy to a permanent and debilitating disfigurement of the body.

All spells require a verbal component and, as many professors state: 'elocution counts.' While a spell need not be elocuted perfectly, the quality of the output is proportional to the quality of the input. For conjuration, the structure is far more critical in the formation of a successful spell than the verbal component, which effectively 'sets the bounds' for the edge of the spell. Specifically, destructors would prefer not to destroy their allies in a combat engagement and set the bounds of the spell to envelop only the target.   Conjuration spells have relatively short verbal components, but are repeated consistently throughout a spellcast in accordance with how much substance is being created, destroyed, or changed. In practice, the more complex the substance, the more complex the spell, and the longer the phrase. Verbal components within a conjuration spell control two or three specific aspects:         Transformation, also called illusion, is a prime example of all three aspects at work. For instance, creating a false wall to hide a door involves laying a weave upon the door frame and adjusting the aesthetics to match the surrounding wall pattern. Poorly cast false walls are found by examining a wall and looking down its length to find any completely flat areas (novice illusionists neglect the shape of the illusion's surface). The duration is frequently long, requiring a higher input of mana and, preferably, configured to draw upon latent mana or a direct aether current source for a continuous supply. Lastly, friendly visitors can use a passphrase to temporarily disable the illusion, enter, and speak another passphrase to restart the effect, meaning the illusionist must set two trigger conditions.

Transmutation requires another discipline to attain any sort of practicality. Without a second, transmutation can merely suffuse a substance with mana, which has little usefulness on its own. However, when suffused, a secondary spell can be cast upon it to provide the intended effect.   Self-chilling cream is a joint effort between a transmuter and a cryomancer (and also an example of organic, and financially lucrative, transmutation). The transmuter suffuses the cream with mana, perhaps with assistance from a creator who understands organic structure. Once suffused, a cryomancer casts a basic chilling spell. A more concentrated stream of mana provides a colder treat while a longer, continuous stream produces a long-lasting refrigeration effect. The time and mana investment, and the demand for chilled treats in remote locations or on journeys, sets the price of the product quite high (with practitioners turning a significant profit).

Come back from an adventure bruised and broken? Still fighting that leprosy? Wait no longer! For a mere pittance, engage the services of the Kingdom's leading healers!   A pittance for the rich and famous. Arms and legs for the commoners...