As a discipline in the school of evocation, geomancy involves the manipulation of a primal energy. In this case, the energy of earth. Its antipode is aeromancy. Commoners, and some wizards, view geomancy as a 'boring' discipline because its most practical application is construction rather than the bright and flashy magic of aeromancy, pyromancy, or cryomancy. However, in battle, geomancers fulfill a defensive role, shielding others from harm and directing the flow of battle in advantageous directions with strategic earthen barriers. 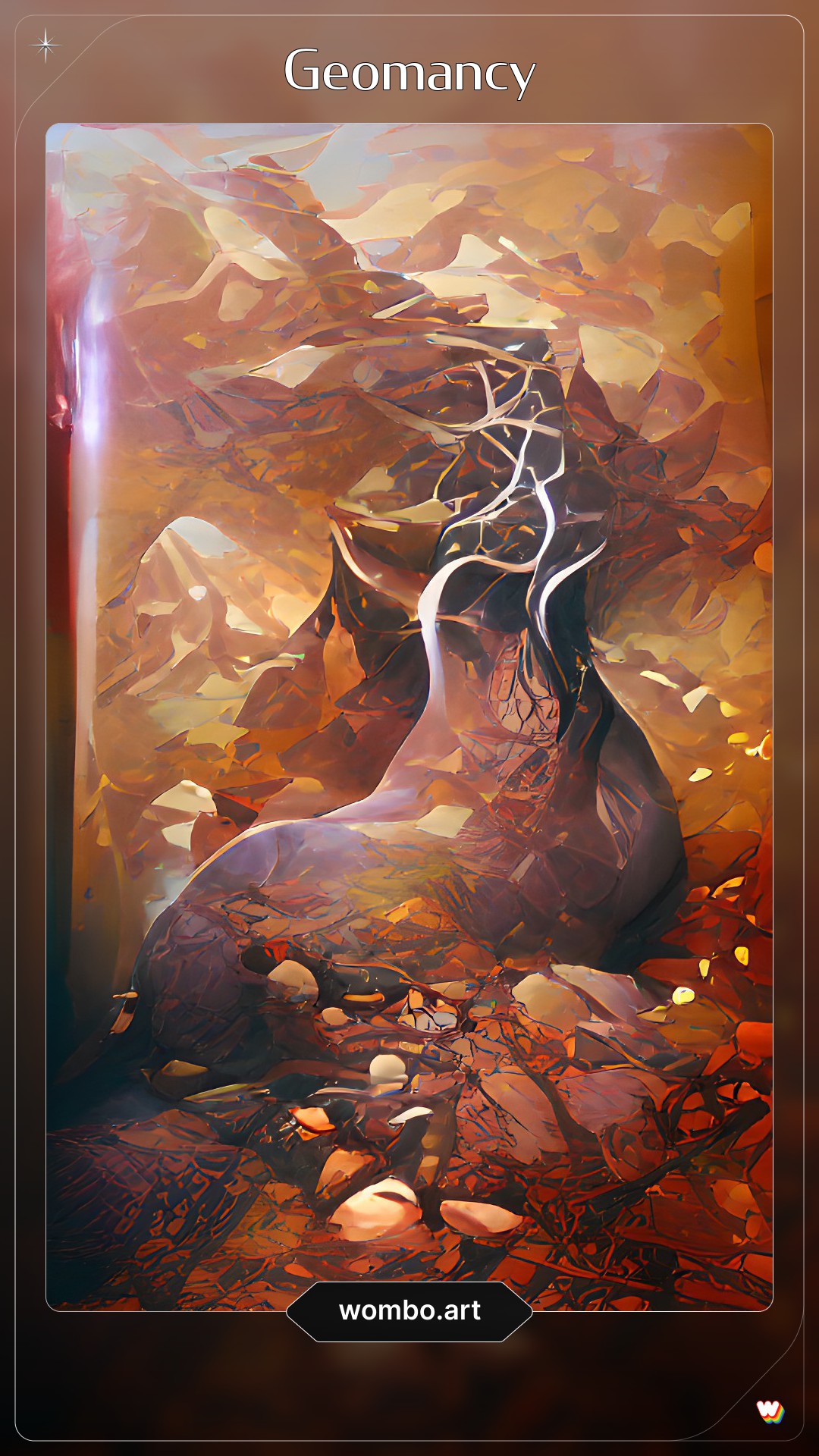 Geomancy by Wombo ("Rock Earth Brown Magic")
In general, evocation mana structures are associated with a spin, speed, and geometric shape. Geomancy is a heavy-'heft' discipline (that is, requiring higher mana input) consuming considerable energy because, as experienced and knowledgeable geomancers say, 'rock is heavy.' Shifting large masses of soil and stone into new positions and fortifying them into a sustainable formation takes effort. The best geomancers minimize their mana expenditure by moving the smallest amount of material required and optimizing the design. In this way, the discipline is similar to architecture and students spend a semester as an architect's apprentice learning the fundamentals of construction and related mathematics.   The common base structure of a geomancy spell is referred to as the 'plate,' referencing the concave state of a dinner plate. Mana flows counterclockwise within the plate, similar to a whirlpool, and is brought into being beneath the wizard's feet or up to mid-calf height. The mana vectors of the feet's soles and ankles are typically used. (Some wizards crouch low to the ground and utilize the mana vectors in their hands as well, but this results in long-term health issues instead of any significant increase in potency.) Observers may see a geomancer perform a 'dance' with sweeping leg motions to inject additional rotational speed into the plate. Geomancers have turned this practice into its own art, which they jokingly refer to as 'geo-style' (though serious practitioners prefer 'geomantic chiralic swing').   The plate mana structure, when casting a combat spell, is dragged along or under the ground, ripping rock and soil into the air or, if the plate is deeply embedded, raising a wall of earth as it moves. The heft of geomancy spells places practical limits on their range, leaving geomancers vulnerable to attacks from long-range. Thus, geomancers engage enemies within groups. Outside of combat, the plate serves any number of purposes that fashion material. Wizards specializing in non-combat geomancy are referred to as constructionists and demonstrate fine control over the mana structure and extensive engineering and architectural knowledge.

Plate structure is a subject that merits the attention of a full semester's class because of the broad swath of geometries and fundamental mathematics required. Mathematically, plates are technically elliptical domes, but the distinction is lost on many casters (and to mathematicians' annoyance). While any individual geomantic plate is simplistic, choosing the optimal form is heavily dependent on knowledge and experience. Further, plates are naturally difficult to sustain as they will bear heavy loads. Plate design consists of five factors:             As an example of plate characteristics, consider the perfect dome. Its long and short diameters are equal and equivalent to the depth. Mana density can be pushed lower due to the innate sturdiness of a dome formation. The depth factor lies in the 'middle' of possible ranges and is the factor mathematically-inclined wizards despise because it lacks consistent foundation in mathematics. Geomancers frequently describe that the range for the factor is from 'near-zero' (a flat, four-pointed star) plane to 'near-one' (a rectangular box). Mathematicians argue that the depth factor fundamentally changes the underlying equation from a 'squircle' to an ellipsoid to a set of intersecting planes.   The combination of attributes contributes to an 'effective volume' for the plate and what manner of spellcasting can take place. Flatter plates are useful for moving earth, but gives little consideration to the form of the it, usually beginning and ending in a heap. Deeper plates are used to shape rocks into specific profiles and force them into a higher density configuration, such as might be necessary for a building foundation. Skilled geomancers are able to separate depth factor into two characteristics: the slope and the cross-section.   Cylindrical columns are an instance of exceptional geomancy. Normally, creating a deep plate for a column would result in a square cross-section because the depth factor is a combination of two attributes (that is, slope and cross-section). There is no mathematical basis detailing why these two are merged, but the natural inclination of wizard's spellcasting is to combine them. Separating them mandates deep understanding of mana structure and flow as well as exquisite command over the wizard's own mana.   The highest form of geomancy is an open geomantic dome. The term 'geomantic dome' refers to a dome made of a single uniform rock rather than constructed of individual stones. An 'open dome' is identical except for a circular opening at its apex. Its creation requires, at minimum, three geomancers. One shapes the inside by pushing out; one shapes the outside by pushing in; and the third punches a hole through the dome with a massive density plate. This necessitates precise timing and synchronization to avoid simply shattering the rock into pieces. Most architects choose to construct the dome traditionally because of the high failure rate of manifesting a geomantic open dome.

Evocation spells, geomancy included, rarely require overly complex verbal components to be cast effectively. Geomancy chants are notably short because so few parameters are affected by the chant, but there are some common effects modified by verbal components.

As may be obvious, nearly all geomancy spells include a verbal component to reduce the effect of gravity. The beginning of any chant starts with this phrase. Gravitation is optionally restored past the initial cast depending on the scenario. When attacking an enemy, gravity could be a useful tool in lobbing rocks over friendly troops. For construction, gravity is restored after the stone is set in place. Other physical laws are often ignored.

The concentration of an evocation spell determines the size of the spell as it travels, its starting volume, and ending volume. All are mostly useless in geomancy as earth is being shifted as part of the spell. Volume is directly related to the amount of material moved and determined almost solely by the plate. The exceptions come when the plate must be sent beyond the normal range of the wizard, but there is a loss of control and potency.

The verbal components guiding a spell around corners or over obstacles are effective in some styles of geomancy. For constructionists, these components are invoked sparingly because it is more efficient to gradually move the plate to the location where it is needed. However, geomancy can also swiftly rotate walls, create spiraling earthen waves, and cause disjointed earthquakes. The mana input for these maneuvers is considerable, but the effects are devastating to non-magical combatants especially. Enemy infantry loses their footing and become easy prey for the geomancer's allies.

Real estate value always goes up! Get on the bandwagon and sign up for rapid residential construction! Low-interest loans available!   I'm no economist, but I'm fairly sure value has to go down at some point...