Cryomancy is an evocation discipline focused on the manipulation of water and ice. Its antipode is pyromancy. Wizards debate whether cryomancy is an appropriate name because of philosophical disagreement regarding its role in thermodynamics or because cryomancy 'sounds better.' (Technically, cryomancy affects temperature and the state of water is an obvious manifestation of this change.) Cryomancy spells span from the simple freezing of a cup of water to ice sculpting or drawing water out of the air itself. As a '-mancer' discipline, it is effective in battle, but is arguably the most profitable magic due to the high demand for cooling, frozen foods, iced cream, and clothes that actively combat humidity and heat. 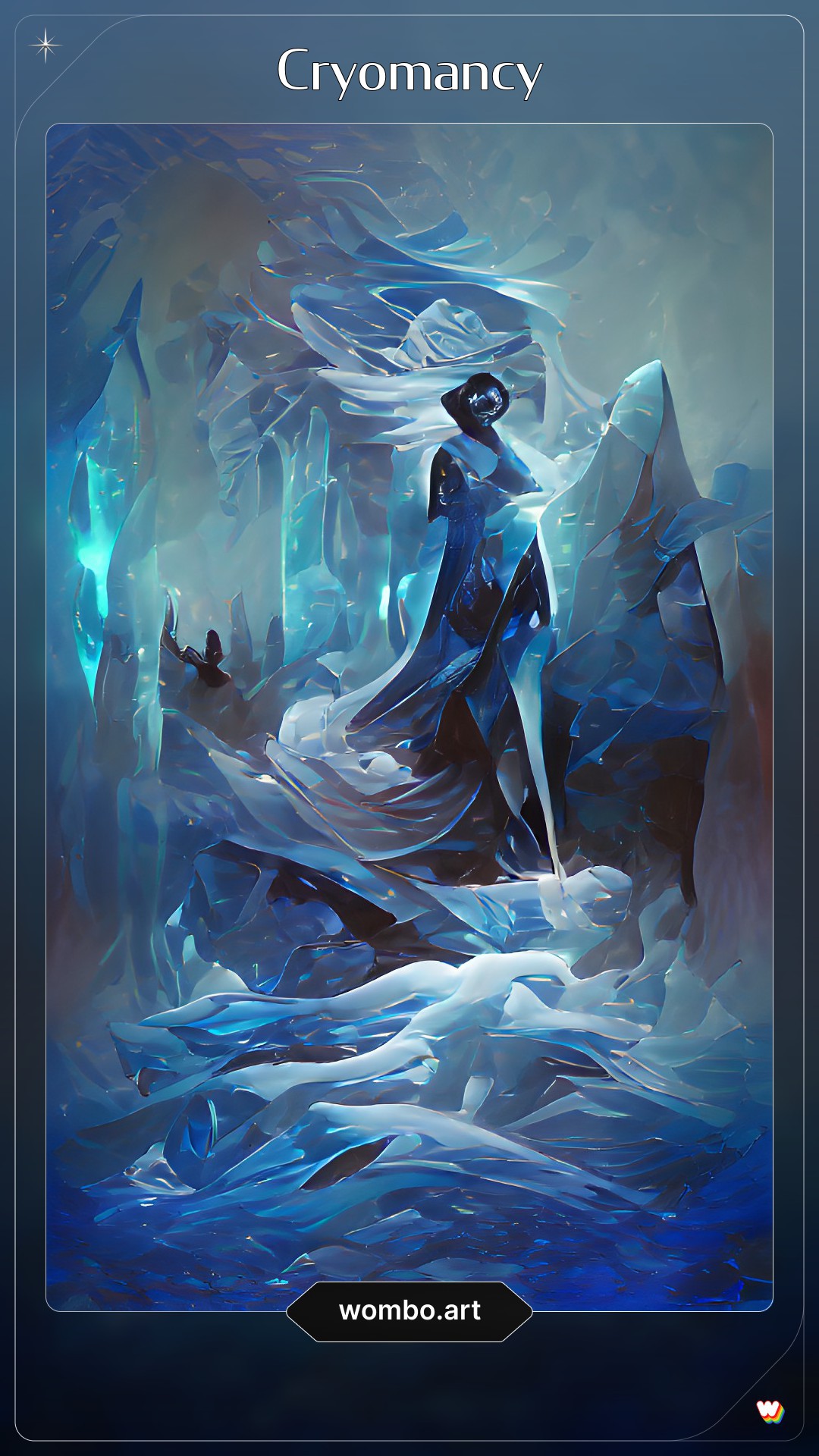 Cryomancy by Wombo ("Cold Ice Blue Magic")
In general, evocation mana structures are associated with a spin, speed, and geometric shape. Cryomancy does not prioritize either spin or velocity, but incorporates both attributes into an even blend. The mana structure of cryomancy is a rotating cylinder evoked in front of the wizard that (were it a wheel) would 'roll into' the caster. While not fully understood, this rotation forces a drop in temperature whereas the counter-rotation causes a rise (that is, pyromancy). Without careful control and practice, the cylinder breaks and exposes the wizard (and those nearby) to cryomantic effects. Thus, concentration and a degree of safety are paramount.   When evoking the cylinder, a cryomancer uses the mana vectors in their hands and an exhalation of mana from their breath. Gesticulating hand-over-hand in the shape of the cylinder and bringing in the exhaled mana at the bottom of the rotation is recommended for maximum efficiency. Though wizards attempt to augment this method to improve spell power (and find gestures that aren't jokingly referred to as 'the cryo shuffle'), few optimizations have been found.   Range is a key limitation in cryomancy. The conclusion of a cryomancy spell is to 'shove' the cylinder forward, but mana cylinders behave similar to physical cylinders in two ways. First, differences in rotation speed at either end of the cylinder turns it away from the intended path (another reason why concentration is key). Second, without a strong shove, the cylinder can 'roll back' into the wizard (and their allies). Military commanders make concerted efforts to conscript only experienced cryomancers into their units until novices have proven themselves as at least adequate.

A wizard's first attempts at cryomancy are arranged for summertime because mishaps in evocation are more easily swept away by the heat. Basic cryomancy spells are not complex, but require fundamental understanding of the balance between cylinder characteristics. Mathematically, cryomancy cylinders are 'cropped cylinders' where the front or back of the rotating mana structure is narrower than the other. There are four aspects of cryomancy spells:           Rotation speed in cryomancy is straightforward: the faster the spin, the colder the spell. Aspiring cryomancers are advised to rotate their cylinder as slowly as possible for three reasons. First, it is easier to 'push' the cylinder away from the caster (and avoid a 'rollback'). Second, the spell is less likely to cause frostbite or other harm. Third, it becomes simpler to concentrate on other features of the spell. On the opposite end of the spectrum, there is a practical limit to how fast the mana must rotate; targets can only become so frozen and the rotation velocity consumes significant mana.   Cylinder radius affects how much mana the spell can contain. Though it does not directly alter the area of effect like the width does, the result is longer range. Mana dissipates as the spell proceeds away and imbuing more mana extends the duration. In situations where distance is not the objective, a persistent spell contributes to considerable temperature drops when the cylinder is held in a specific spot.   Greater cylinder width yields a larger area of effect. High-level cryomancy spells apply frost across fields or completely freeze the surface of a pond. With a convocation of wizards, small lakes have been frozen via spell. However, the chance that the spell will drift off target is higher as width increases. Managing rotational speed across a widely cast cryomancy spell is significantly more difficult and differences lead to shifts in direction.   The front-to-back ratio is the final thing a cryomancer learns to manipulate. It is challenging to master, but the rotation of mana is focused to a narrow channel in either the front or back of the cylinder. There are two potential outcomes: a broad sheet or a sharp point. An ice wall is an advanced form of cryomancy where the rear of the cylinder is far smaller than the front. While achievable without modifying the front-to-back ratio, it is vastly more mana-efficient to implement with a greater-than-one ratio. For a spike, the ratio is under one (and usually close to zero).   The ultimate manifestation of cryomancy is the ice spear, which ends in a needle-like tip. The concentration of mana at the apex is far higher than the back, resulting in a robust, piercing spell. Fine control is required to narrow the cylinder while maintaining a high enough speed to form a frozen tip capable of penetration. Because of their extreme characteristics, ice spears are difficult to command, which necessitates a verbose verbal component to ensure proper guidance.

No wizard has found a way to stop 'roll back' through physics manipulation (or every cryomancer would do so). Instead, most cryomancers begin their chant by altering gravity. Exceptions exist, such as in siege warfare, but cryomancy spells will avoid gravity where possible. The chant also aims to enhance the effects of thermodynamics to transform the spell into a colder state. A suitable balance of chant and rotation manifests a similar chill, but with lower mana expenditure than pure rotational speed.

Cryomancers tend to eschew modifying the spell concentration. This is not because it isn't useful, but because it adds another factor to manage and there are already enough ways for a cryomancy spell to backlash. However, masters of the discipline define concentration changes over their spells' path. In combat, packaging a spell as it travels and then expanding it rapidly avoids collateral damage. This also maintains mana in the cylinder for a longer distance.

Exceptionally skilled cryomancers do not bother with verbal guidance components because they manipulate the rotation along the cylinder's axis to direct the spell around corners and through basic turns. For the average cryomancer, the chant ensures the spell stays on target despite any mistakes in mana structure consistency. Although it is mana- and time-efficient to adjust the cylinder itself instead of through the chant, adding complexity to the cylinder is more likely to result in a backfire than a positive outcome.

Last summer recorded the highest temperatures on record and if you didn't have a Fenwick's Freeze-Air, you don't know what you're missing!   Half their revenue comes from the military. No qualms greasing palms.