The young man stepped from the Crystal Archway. His skin creamy, blonde hair partially covered by a brown wide brim hat. Two neat braids before his shoulders over the beaded broad neck & shoulder collar of last year's style. A well bred straight and narrow nose and grey eyes over a confident mouth. Well dressed, in traveling boots, silken sand colored hakama skirt in the popular puffed style, the purple sash of a Noble, with short sword in decorated scabbard, a v-necked sandy linen shirt and the outter jacket in red with House symbols of Black Elk, one facing forward, the other back with stylized snowflakes between the hooves. He stopped five steps from the archway and listened to his servants and porters arrive.
"My Lord." Said the official with a bow. " I am Honjo. Welcome to the Outter Core!' He waved an olive skinned hand and two dark skinned male beastman slaves in gold trimmed white loin cloths, of goat face, stepped forward with trays, one bearing a cup and watered wine, the other sliced fruit and cheeses. " I trust his lordship is fatigued from his travels and wishes his rooms?"
"I had expected my Uncle." The young man took the cup while the slave poured. The youth watched carefully and pulled back the half full cup. The beast deftly slipped it's other hand under the spout to prevent spilling. The young man frowned and continued: "And, not really. We had stayed at an inn accustomed to serving court officials and noble travelers and took a late arrival to the Governor's palace. The Archway is marvelous. In the blink of an eye we travel from the Southern shores of East Olia across a thousand miles of ocean to stand on the islands of the Outter Core!" Behind him is the thump of a dropped trunk. The young man snapped his fingers of his free hand. "Punishment!" he barked. "So, Honjo - how do I have you and not my uncle?" Behind him a shuffling and meaty thwacks of the rod - whispers of reprimand and shame, "Allowed to bear his lordship's trunk to the Core and you mishandle it stupid brute!"
Honjo bowed and motioned the Goat faces back. " Your Uncle had an unexpected call in the Imperial Court and will meet you this evening. Allow me to show you your rooms. Do you wish to keep your slaves attending or shall they be sent to the beast yard?"
"They are stupid and worthless aside from my valet. Kill them or send them to your yard. I do not care."

Slave owners may give names or remove them as they desire. Disobedience or resistance is punished with beatings, reduced rations or crueler duties.

Beastmen are tribal nomads living in warring groups of 10 to 30 adults and equal numbers of variously aged young. They are united behind Skinchangers and Elder Gods and several tribes may follow leaders bound to the Skinchangers  or Elder Gods  or both. On occasion some leader will get several tribes to unite to raid villages and settlements. It is the Skinchangers who create the Silver Tattoos that can protect the Beastmen from Corruption and add some marginal protection from transforming Warp Storms .
The tribes value valor and cunning. Generosity with friends and allies and ruthlessly vanquishing enemies. Heads make be taken and destroyed to keep the dead from seeing and hearing. Labor is divided by ability and disposition and most work together in moving camps with forward and back scouts and transporting tents and possessions on sledges.

Males and females may be fighters, though females are more frequently pregnant or caring for offspring. Because of this, sages observe the females are generally more docile and engage in peaceful harvesting verses aggressive hunting. - Okom Cyof, Master Golam Philosopher.

Beastmen in the tribes have a late neolithic technology with some copper work but mostly bone, stone and wood tools and weapons. The fermentation of beer and ale is practiced and raids frequently focus on inns and the alcohol they store.

Beastmen typically dress in hides, and simple leather or fabric tunics and skirts or breeches/ trousers. In the north they will wear furs.

Simple carving, skin painting or tattooing are the extent of their arts. Hide tents are their archetecture. They sing songs about great victories and heroic battles.

The tribes are suspicious of strangers and typically attack upon encountering them. A stranger who gives gifts and boldly walks into a camp is now an honored guest and safe.
In the empire, Beastmen will sing quietly in their night pens and yards, so as not to wake or disturb masters. They whisper stories and poems handed down or half remembered or occasionally newly made. They hide and collect what coin or treasure they can in the vague hope of buying themselves or another - a thing so rare as to be legend and having been documented only twice. More frequently they may use the money for small pleasures of food or drink if allowed out of the house.

Birth is a miracle and terror. Afterbirth and dead are buried at God Mounds. Infants that survive the first week are given names.
Beastmen outside of the wilds still practice these traditions if able.
The face-breed of Beastmen tends to breed true - ox to ox produces ox offspring. Less than 1 in 20 produces a Sport of a different face though still within the types of carnivores or herbivores.  Cross breeding will produce mostly one or the other parent's type with, again with less than 1 in 20 being a Sport.  Mostly Beastmen bear a single or twin.

The lucky few who die peacefully or old age in the tribes are buried at God mounds with the sure knowledge that the dead will pass and dwell eternally under the ground in the God's domain. Those who die with unfinished business, in pain and loss may be allowed back by the tribe's God as vengeful or haunting ghosts.
Those who die in other lands are treated as the State Church or local tradition dictate. 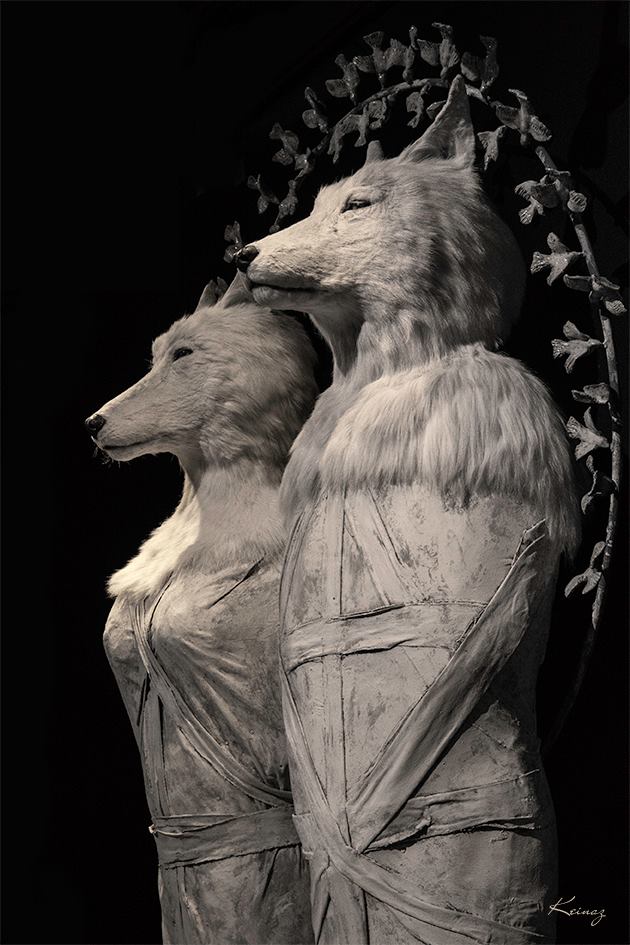 Grooming and overall grace, as well as personal decoration with flowers or small bits of jewelry such as copper rings or bracers, sparkling olivine or other semiprecious stones caught in wire or drilled and placed as earings by anyone is a good addition. Singing is also valued.


The Beastmen themselves seem to value neatness of hair and feather, symmetry, strength and grace of movement. Aside from that, they judge no more than any other beast.

Songs are sung and displays made. Courtship is by personal interests and desires. Each is expected to take responsibility for their choices and mistakes and try to chose wisely.

The life of the tribes is hard and tightly joined. They generally have labor divided between camp and forage depending on individual ability and fitness. Partnerships take any pattern the individuals desire but they share on most things while also making small gifts and signs of affection. The Beastmen tribes value offspring, but each is to find their own path and any partnering is good if the partners are pleased with it.


Sages have not investigated the wild tribes as their savage and barbaric ways make them difficult to observe. They will of course tell anything the listener wishes to hear or believe that paints the Beast in some noble light. It is however not hard to believe that the females may have gentle feelings and instincts of motherhood such that they might be trusted as a nurse or maid to human children. 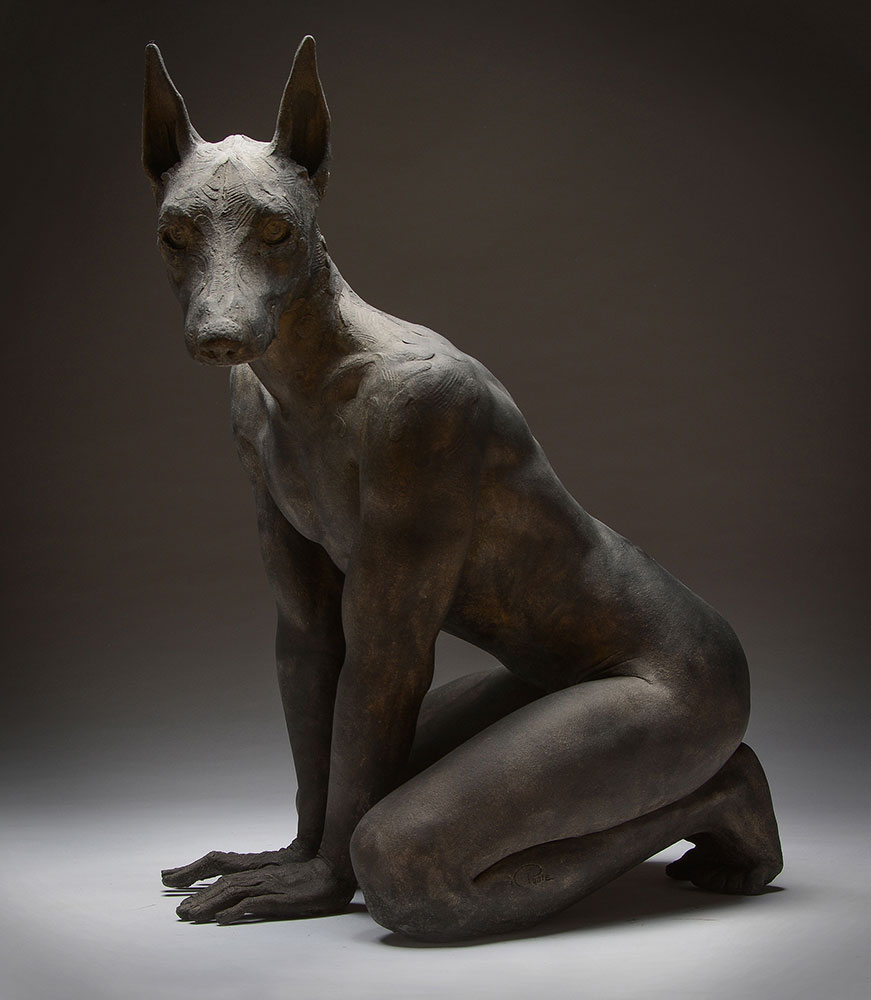 http://www.kristinepoole.com/ by Colin-and-Kristine-Poole
Beastmen are humanoids with a human body and arms, Clawed hands with animal heads. Some will have tails and feet consistent with the head species. Most are mammalian or birds, few are reptilian or insect and only a few fish types such as a shark. They are simple, savage wild Barbarians with stone, bone and copper or bronze tools and weapons. They are easily impressed with magic, having none of their own. 1% are infectious by bite. Generally they are weak against Corruption (see Crystal and Corruption unless marked by Silver Tattoo. Scholars and sages have debated the origins of this race: God cursed, Warp Storm victims, One time subjects of Demon or Sidereal experiment, or escapees of the Dreaming Realms. They have no history and do not know and the other races and species say the beastmen race goes back to the Tumult at least. They are recognized as a debased or degraded race of humans - they have bodies and limbs of humans. They may cross breed with humans and Fae. Like humans they may eat plants and flesh, though the carnivorous featured types prefer meat.

It is well known that the Golam war with and capture, train and even breed Beastmen as slaves and have built a strong trade with selling broken and trained ones to the Core, Olia, the Teeth and amongst themselves in the Golam lands. This is indeed how most may have knowledge of the creatures. It is rumored that some are sold for feed to Harrowlanders and Lizardkings, mostly insect and other grotesque types. The Sealie fae do not abide them. Unsealie may buy them as slaves and for toys as the Sidereal once used them. Sages say the Beastmen are some sort of debased human type, despite the beastial heads and faces. They are simple minded creatures, less clever than the average human and more like slow and simpleminded children and so only fit for servile position. They have strong backs and limbs well suited to labor. Lore masters note that some may be taught letters and numbers. They may be taught to cook properly and follow recipes but it is well known to keep the wine and ale under personal lock and key lest they drink it all and pass out. It is known that some have comely bodies and with application of blanket or bag, their monstrous features might be overlooked. Certainly young and attractive ones, especially wolf, fox, cat or horse fetch higher prices and may be found in brothels. Bastard offspring from Beastmen are not unheard of and are grave insults and dishonors to slave owning households. Such young may be killed outright, or if they might pass as Beastman, kept as a slave. If too human they may be set out in the wild or on the streets, if not slain at once. Some houses geld the males to avoid indiscretion and assaults. Only in Esereti provinces is the keeping of slaves judged unsavory, and any slave that should escape to Eseret domains for a year and a day is pronounced free. They are still low and despicable creatures fit only for crude labor and unclean works, classed as UnJor (beneath the law)- thieves, brawl/ pit fighters, undertakers, rat catchers, street sweeps, haulers of waste and nightsoil, performers and entertainers. Few well bred persons think the Beasts merit any higher rank. - Kan Ajit, Natural Philosopher of the Imperial College, Kuan. 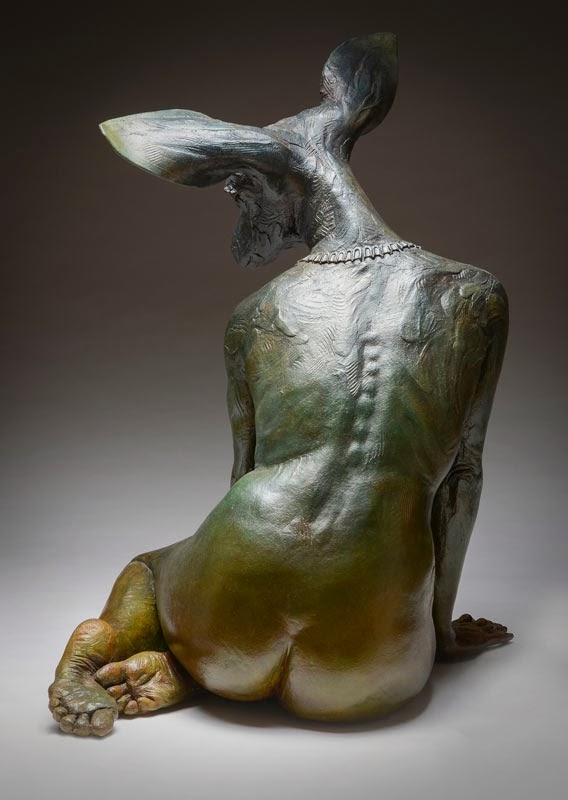 http://www.kristinepoole.com/ by Colin-and-Kristine-Poole
Within the Empire generally, excepting Eseret, the slave is seen but ignored unless at fault or need and rarely heard. Invisible is to be desired personally and as a value promoted by the State Church and the God Hasagyjo.
Beastmen will frequently cluster together for touch and comfort. Life in the empire offers some comforts, especially with wealthy houses where a foot servant, maid or valet may be well dressed, expected to be well groomed and gets choice of scraps and spare foods second only to the cooks and kitchen staff. Frequently, kindness and gifts to the chattel reveal secrets or gain kindnesses in return for spies and visitors. It is not uncommon that one raised with a companion Beast slave may treat them as pets or companions or depend on them like a proper vassal.