The continent of Aressa is the southernmost known landmass of the world, a cold land ruled by war. The Feuding Kingdoms of Axmund and Arcadia fight among themselves for dominance of Aressa, while the cities of the Iron Mountain League seek to preserve their independence and grow their wealth. 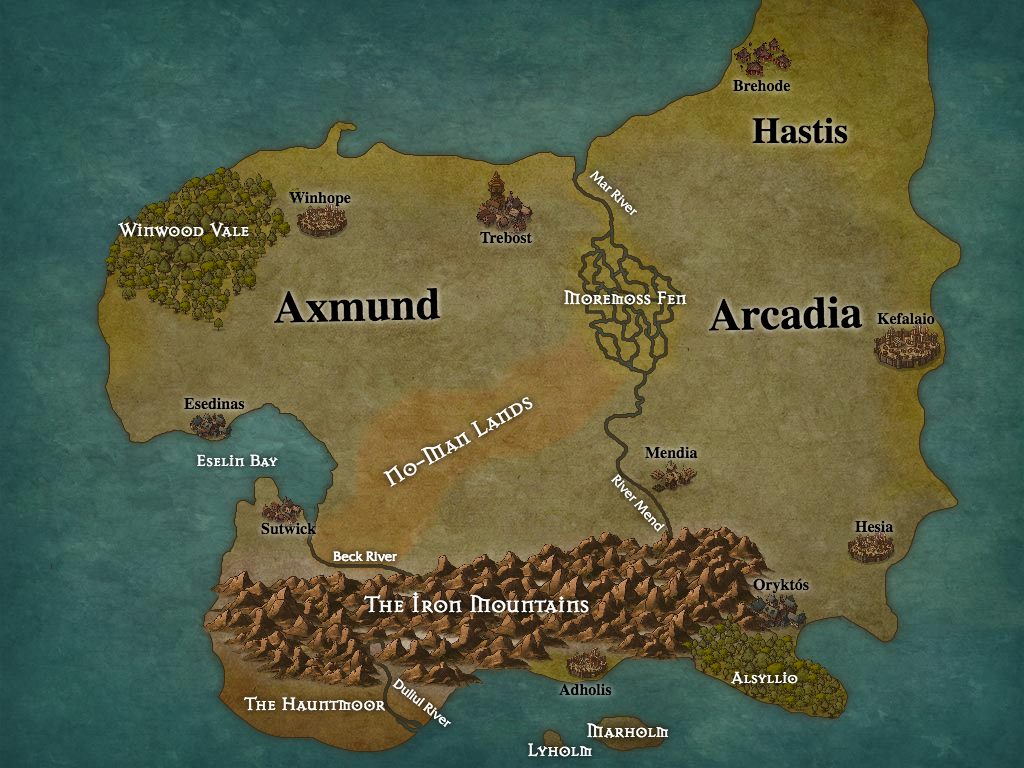 The Kingdom of Axmund encompasses the west of Aressa from the coast to the Carwold, and the isles of Marholm and Lyholm in the south. Its southern borders are defined by the Carwold and the Beck River, and its eastern borders by the Moremoss Fen and the Mar River. The greatest cities of Axmund are the capital Esedinas, the former capital of Winhope, the port city of Sutwick, and the academic city of Trebost.   The majority of the population is human, with a significant minority of halflings in the northwest. Axmund's current ruler is King Marburn the Lame, the nineteenth king in the line of Rinburn First-King.

Stretching across the east of Aressa, the Kingdom of Arcadia holds lands from To Synoro to to the eastern coast, as well as the isles of Cratea and Megea. To Synoro marks the kingdom's western border, while its northern borders are ill-defined. Arcadia rules the northern peninsula in name, but in practice the people of Hastis are independent, and Arcadia cannot risk turning away from Axmund to conquer them. There are many powerful merchant cities along the eastern coast, as well as several cities further inland; the greatest of these are the capital city Kefalaio, the merchant power of Hesia, the river-garrison and trade posts at Mendia, and the fire-powder traders of Oryktós.   The upper class and the majority of the coastal peoples are elves, while human populations are greater westwards. Arcadia has been ruled by King Tordithas from his palace at Kefalaio for the last fifty-three years, after the untimely death of his father Cagaetos.

Located in the south of Aressa, primarily among the Iron Mountains of its namesake, the Iron Mountain League is a confederacy of five independent cities in the Iron Mountains: the three great dwarf-halls of Masïkhunaut, Yinunaut, and Khinaut Dïdeldithlïdush carved beneath the mountains; the gnomish city of Bailenoc in the southwest foothills, north of the Hauntmoor; and the Free City of Adholis, on the southern coast almost due north of Lyholm. The League is the youngest of the Aressan powers, having been formed in 1407 in response to the threat of the Feuding Kingdoms. Its goal is the preservation of independence by any means necessary, to which end the League has become a war-profiteer, selling Fire-Powder Weaponry to both Axmund and Arcadia so that the war may be prolonged and the League overlooked.   The majority of Leaguers are dwarves, but Bailenoc is almost entirely gnomish and Adholis is among the most diverse cities of Aressa.

The northern peninsula of Hastis is peopled by the descendants of the Heoringas, who retain the fierceness of their ancestors. They followed the great warrior Heor the Spear across the Tiril Bridge 500 years ago, swiftly conquering much of Aressa until the tribes united into the coalitions that would eventually become the Feuding Kingdoms. All that remains of the Empire of Heor is the pastoral land of Hastis, a fragmented and relatively passive realm. The only great city of Hastis is Brehode on the northwest coast, famous for its vineyards.   Most of the Heoringas appear fairly human, though they are different enough in their ancestry that some have declared them a different creature altogether. Their skin tends to be much more tan than Axish or Arcadians, and their eyes appear to be slit like a cat's.

The majority of Aressa is rolling hills and flat plains, with the ground rising as one continues southwards. Small forests are scattered throughout, but the two great forests of the Winwood Vale and Alsyllio stretch for many miles. In the south, the massive Iron Mountains rise from the ground, beyond which lie the Hauntmoor and the sea. Just northeast of the continent's center is the gigantic Moremoss Fen, where the River Mend flows into a low swamp. To its west, on the coast, the Eselin Bay cuts into the shores of Aressa. Many isles lie south of Aressa, including Marholm and Lyholm just off the southern shores and Megea beyond sight of Aressa. However, no islands lie east or west except Cratea to the east, and only one has been found to the north: the tiny Dreadnaught Isle, the location of which is not accurately known.

The map seems like a lot of effort was put on it. Inkarnate is so powerful! I like how the cities are very diverse and also find interesting how the Mountain League istheirng profit of a war that isn't their.

Thanks! I actually drew up the map on graph paper, but it was too messy to scan it. I tried to make cities and groups with different "character," so I'm glad you took note!