"Don't you dare question my decision, counselor. The drow are there to be used. And I am not about to get rid of such a useful tool in times like this. I must get rid of those criminal scum, no matter the cost."
— Abraham II, King of Archana


In every community, there are people with differing opinions, and so there will always be a rivalry between certain groups. In politics, some of these groups may prove to be harmful to the established power. When this order is threatened, the ones in power are capable of anything to take their enemies down without getting their hands dirty, and so organized groups of assassins for hire were born. But extreme situations demand extreme measures and, in this case, these assassins had to be very well trained and specialized. Organizations rise, where the to-be-assassins are locked down and put into a harsh routine of intensive training and contract fulfillment. From this group the Drow rose, a race born from Dark magic.

The drow body structure resembles the Elves' due to the use of Wind magic. They are thin and lightweight, but a bit frailer due to their extreme, inhuman traditions. Their low weight helps them with the stealth and quickness they need in their line of work, and that is also augmented by their leg muscles, which have exceptional endurance. Thanks to that, walking or running, a drow is never heard. This is all quite similar to the elves, which is why the drow might be confused as a simple dark-skinned variation of them. But those are not the only similarities; drow ears are longer and pointier than humans', resembling a lot the elves', but less refined.

Their fingertips are naturally calloused and their muscles extremely resilient, a necessary adaptation to hang on to and climb on the walls of the cities. This is accompanied by their outstanding motor coordination, with which they can achieve hand tricks eyes are unable to keep track of.

But the most distinct drow characteristic is their skin color. Despite they are never under sunlight, their skins have adapted to be darker, from gray to an eggplant purple. This is a magical adaptation to help them hide in the dark. This contrasts with their hair - which is crude and brittle, dark gray during infancy and changes to white as they grow into adults. This is due to terrible care and health conditions.

Drow are slightly shorter than Humans in average, measuring between 1.6 and 1.75 meters high. And like elves but less specialized, drow are lightweight and acrobatic. They weight around 40 and 55 kg.

Due to their dark vision adaptation, the drow's eyes are different than normal. They are like silverish crystal spheres, with a slight violet or red coloration that reflect from their interiors.

Also, drow ears are longer and pointier than humans'. An adaptation much like the elves', but less evolved.

Archana is the only known place to house drow, albeit their existence is a secret to all but a few noblemen. They are all part of an assassin organization known as the Silent Blades. Such as it is, it's pretty hard to separate the drow's innate characteristics from their local traditions.

Their eyes are one of the best among the new races, if not the best, to see in the dark. Drow have developed a natural dark vision that allows them to guide themselves in the dim-light areas with no difficulty, but thanks to that they are also very sensitive to bright lights, especially from the sun.

Thanks to their strong connection to Dark magic, weaving this element comes naturally to them, and all drow can do so.

The Silent Blades, located in Blackbourne, Archana, is an order of assassins composed only of drow, and is the only recorded drow organization, yet widely unknown.

It's hard to separate the drow race from the organizations they work for and live in. After all, they were born for them, exist for them, and will die for them. Both are one. Their lives in their hideouts are harsh and inhuman. They never leave for anything but to kill, spending every day, all day, either training or being punished for their mistakes and transgressions.

In combat, drow don't exist. They are nothing but shadows that crawl through dark corners until they find an opening to bring death to the enemy. They would rather never show up face-to-face unless there is no other way. All their adaptations give them the upper hand when they fight hidden and in the dark. Even still, they are far from useless in direct combat. Their manual dexterity gives them greater ease in manipulating smaller weapons such as daggers and throwing weapons, and even if those are far from ideal for self-defense in the situations they might put themselves in, their exceptional skill grants them a near-equal ground against other fighters. But since they are always striving to not be seen nor heard, drow never use armor, not even the lightest – they use only clothes made for the job.

With their innate skill in Dark magic, drow weave shadows often to keep themselves hidden, confuse and scare their enemies and drain their vital energy. This is certainly what makes them so scary as assassins; one who knows their death has been paid for can never know for certain when they are being stalked, and any shadow just might be concealing their doom.

Dark magic originated the drow as its use was ever more present during their contracts and their training. As such, the bond created between them and the element guarantees a routine use of this type of magic, especially the manipulation of shadows as it helps to stay hidden during their contracts and move between shadows without being noticed, to the point the drow are believed to be “living shadows”. Of course, this affinity comes at a price: they cannot use Light magic, and in fact, they fear it. While their lifestyle has taught them to stay away from the light, their photophobia taught them it is harmful, and their elemental affinity taught it is their enemy.

Besides that, Wind magic also has its importance, albeit smaller. Like elves, drow use wind magic to bolster their physical feats and manipulate sounds and projectiles.

The only thing one can say the drow believe as a group is in death. Life exists and death is its inevitable course. It's not something good or bad, simply something that will come. They accept death with no attachment to life, be it either their own or someone else's. They see themselves as messengers of death, those who make the wheel spin, the cycle to be fulfilled.

Drow don't have any friendship or enmity with other races. They are such a rare and recluse kind that the huge majority of people haven't even heard about them. And among the whispers and urban legends, drow are also better known as “dark elves” for their resemblance to the Wind elves. 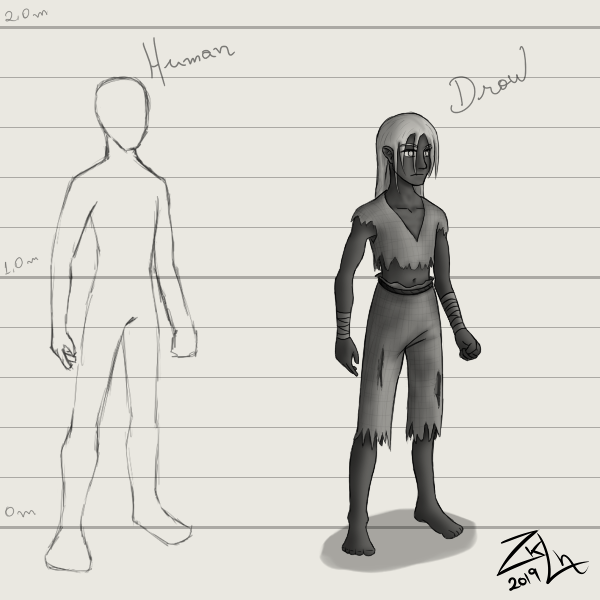