"Elves are... interesting creatures, are they not? Mixing music and magic... who would have thought? If it weren't for them, we wouldn't be here today."
— The Night Echo


When most Humans began to regroup and rebuild after The Calamity, a few of them preferred to follow their new beliefs to the letter and stay in smaller groups, living a life closer to nature. Without any kind of advanced weapons or tools, these groups needed to learn how to hunt like predators: being quick, silent and deadly. To that end, they found out that Wind magic was much useful at enhancing their abilities, helping them become faster, stealthier, lighter, sharpening their smell and hearing, increasing their ranged precision and some even learned how to camouflage themselves. Through the generations, this type of magic transformed these groups in true predators, the Elves, as is the Wind element's characteristic.

Elves are shorter, lighter and noticeably thinner than humans, giving them a frail appearance. While it is true that their strength potential is lower, the average elf can use it nearly to the same extent as the average human. In contrast, their small bodies grant them greater ease of movement, making them more nimble, dexterous and acrobatic on average.

Their hair and eye colors can vary as much as humans' do, but the hair is always straight or slightly wavy, and they often keep them long and tied. Their skins have a goldish hue, a magical adaptation to help a little bit better with camouflage than the common European pinkish skin.

The elves' height ranges between 1.55 and 1.75 meters, slightly shorter than humans. Their lightweight and slender bodies are adapted to hunting, they need to be quick and nimble, and stay at an average of 35 and 50 kg.

Elven eyes are slightly larger than humans’, granting then improved sight definition, be it during the day or night. Their nasion is more protruding, coming down nearly straight from their foreheads, both to give space for a larger olfactory mucosa membrane, resulting in a better sense of smell, and for the better circulation of air that they need for the intense breathing during their physical activities. Their teeth are similar to humans’, but with slightly larger canines to tear through meat. Their ears are possibly the most unique of their facial features, having more in common with animals than humans; they are longer and have developed new muscles, which allow the ears to move and turn, like dogs and cats. While this doesn’t increase the hearing per se, it does give elves a little better notion of direction when trying to locate the source of sounds.

It is hard to tell the exact proportion of elves in the world. They live isolated from the rest of the world, despising the rebirth of civilization, and would rather keep their distance from other people that disrespect nature. At first, it is believed that they are rare as many people live and die and never meet a single one of them; but one can never know exactly how many of them are out there, hidden in the woods and forests.

Despite that, it is believed they can be found nearly anywhere where there is vegetation, which includes most of Europe. In Krenjor they are more common as there are many forests protected by the cold, while they are nonexistent in Welfenbach, where there are no forests to live in.

Many adaptations happened to the elves to help them survive in the wilds, sharpening their senses. Their bigger eyes grant them slightly improved sight under both light and dark, their noses grant them better smelling and their feral ears give them an improved notion of sound direction.

Besides that, elves have a keen affinity to Wind magic. All elves can bend the air in the most basic ways, and they use it often to complement their natural physical capabilities.

Nature and the unity with it is a central foundation to elven culture. Everything in it revolves around respecting nature and appreciating its beauty. In order to avoid throwing the world again into the chaos that was the Realm Wars, the elves believe that we need to live in unity with nature, as the animals do. For that, they isolated themselves in small groups and take from nature only what is necessary, which has modeled their way of thinking. As elves don’t have any contact with other cultures and ideologies to learn and respect others, they’ve grown arrogant, holding their beliefs as superior and absolute with no questioning, and for that, they see themselves as better than other races. Despite that, they are kind to them, as cordiality, too, is part of their beliefs. They are friendly and exemplary in order to show their superiority, and with luck, convert the misbelievers.

Elves are mostly nonviolent. They do not get involved in battles that do not threaten them directly, but they are skilled in combat thanks to their natural dexterity and the hunting training. That said, they are more often than not very skilled in archery. In the frontlines, they are still quick and evasive, but they aren't much durable. While armor would help with that, many elves prefer lighter armors or even no armor at all, so it doesn't get in the way of their movements.

Due to their culture, acquiring metals for weaponry is a pretty hard task. The metals and blades the elves use are few and used with the sole intent to protect their Sanctuary, or for another greater cause.

When it comes to magic, some elves would rather follow the path of the bard, using music to boost their allies' morale, but most prefer to use magic offensively. Those who fight armed often use magic to bolster their natural abilities, which is its most common use.

Wind magic comes naturally to elves. Their agile movements and sharp senses work naturally with magic of this element, but this connection makes them have a harder time trying to use other elements, even more so the Earth element. This kind of connection, albeit with other elements, is common among the other new races, but the elves have a special cultural bond to it. They see magic as a deity and a form of art, and so they respect and worship it.

Springing from this idea, elves have a tendency to follow the way of magic as they grow up, but almost all of them use at least the most basic of Wind magic. Being so, even those who focus heavily on armed combat still make use of magic to enhance their physical prowess.

Besides that, the elves have developed a unique art: the mix of music and magic. Sounds, the vibration of air, can be easily manipulated with Wind magic. This gave birth to a common hobby of playing music, and through the years elves developed magical techniques using sounds, and with that a special appreciation for the art.

Music has become an important part of elves' lives. As a distraction, to tell stories, in celebrations or mournings, elves use music with magic as an integral part of their daily lives. And just as music, magic has an important role in their lives too, in both practical and religious ways.

Elves originated from humans who wanted to follow their newfound philosophy as a central belief in their lives. The religion has changed in time, but it keeps most of the original ideals. Similarly to many of the humans' religions, they believe that aether is a divine essence that scattered during Creation. But unlike humans’ religions, elves believe that the ultimate creation of magic, Earth's Nature, is the pinnacle of perfection. They revere nature in all forms and show that in all of their art and crafts.

Elven architecture is full of details and alludes to nature's beauty, while not being crude. Curvy forms and details mimicking foliage are all over, and are present in all elven crafts, from weapons to clothing, furnishings, etc.

Everything is made out of wood, rarely of stone and metal because it is a resource they can replace in nature. All the trees they use to build their homes are planted before being harvested. This is an extremely long process, as it can take years to grow, decades even, which creates a special bond between the owner of the house and the wood it was made of. The metals are used only for weapons or small, precious ornaments, for their rarity. They are collected slowly from the land and rivers, treated with magic for long periods of time, resulting in metals with special properties.

Most elves live in small and unique villages called Sanctuaries. These settlements are natural havens built among trees, and not a single one is chopped down in order to build them. Their architecture and arrangement all interweave with the local vegetation and geography, and this all contributes to the difficulty to find them. Not only that but even if one is ever found, no one is allowed to come near - only elves are worthy to enter their Sanctuaries, no exceptions.

This all contributes to the fact that it is pretty hard to have a good idea of how many elves and Sanctuaries are hidden out there. Demographics on Elves have to make do with the rare few who eventually disagree with the way of their people and leave their homes behind to live among humans.

There is no agriculture or any kind of production of food or other goods (except for the wood for building and crafting). All the elves need they take from nature and prepare and consume it immediately, as is the natural way of things.

Elves are rarely seen among other races, but when they are, their attitude towards them is almost always the same, independently of the individual’s origins. No matter the race, even half-elves included, elves see them all either as poor fools who are unable to follow their beliefs or arrogant fools who oppose them. This is especially true when it comes to those who actively harm nature's integrity, such as the Orcs, and to those who follow opposing paths to their culture, as Dwarves.

Dwarves, by the way, are a special case. While elves are more liberal, religious and refined, dwarves are conservative, realistic and arrogant, making of them natural rivals. Such a difference of beliefs generates a lot of distrust between both races, to the point they often would rather not share the same room. Despite that, big conflicts between elves and dwarves are nearly nonexistent, as both races prefer isolation. 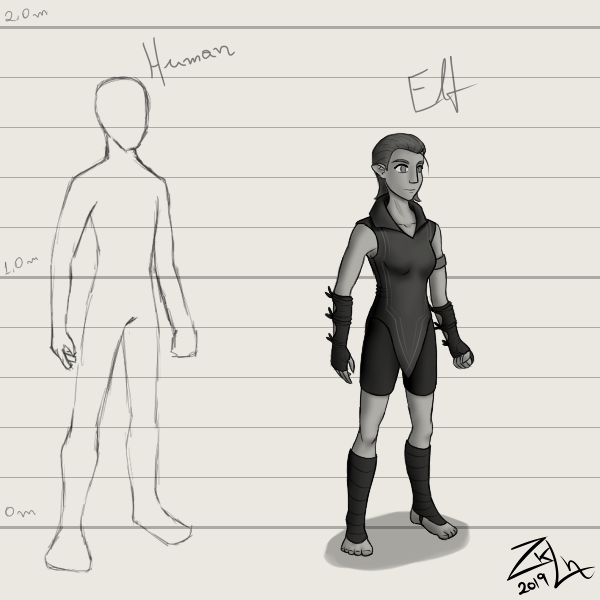