Two minds battle for control of one body.

The kishi are a sapient folk primarily found in the Mesa Dunes. They can be easily recognized by the second hyena face on the back of their head. Folk of the Mesa Dunes tell their children ghost stories of the kishi who will eat you alive. Kishi, who once thrived the northern grasslands before being hunted to near extinction by the Zuvmurt elves, warn of the disingenuous stranger who will chop off your head and sell the remains for gold.   Perhaps there is some truth on both sides.

The kishi's mind is separated into two psyches. A charismatic, charming, and cognitive humanoid. And the hyena who wants to use those abilities to feed. Which side gains control is a daily struggle for the kishi.   Kishi that give in to their hyena's hunger often roam alone or in pairs, seeking small or weak folk that they can charm into following them. Once separated from the crowd, a kishi will reveal their hyena head and devour the person alive. Starting with the face so as to muffle their screams quickly.   Kishi that choose to let their cognition rule often band with like-minded kishi for protection and shared empathic bonds. Never staying in one place for too long, these kishi nomads hunt animals to sake the hunger of their hyena. And when necessary, steal livestock or charm folk into giving them away.   Whether to hide their true intentions or shield themselves from discrimination, kishi are born with the instinct to hide their hyena head unless alone or with fellow kishi. They wear their hair long and wrap their heads in scarves. The smartest of kishi wear elaborate headdresses that hide the hyena head from sight, but allow the beast to still see. A person may recognize a kishi in disguise from the occasional strange laughter or growling that has no body.

A kishi's hyena head must be fed daily to quell their hunger. The hyena will not accept cooked meat or plants. The meat must be fresh, whether alive or recently dead. Out of desperation, some kishi may feed their hyena head old carcasses, but this can cause severe illness.   Kishi must also carefully control their rage. When their emotions get too hot, the hyena psyche may temporarily take over their body and rampage. At a young age, kishi learn not to take things too seriously, as a manner of survival.

All kishi have innate magical abilities which give them some measure of temporary control over other folk. Although prey should feel fear in the face of such an intimidating predator, most folk feel magnetically drawn towards kishi. Their aura invites people closer. Their words beguile folk to follow their commands. Many a person has fallen in love at first sight with a kishi. Those who train their innate magic can learn to use their latent abilities on command.   Although fear of kishi was a determining factor in folk hunting and killing them on sight, there were also opportunistic people that learned a kishi's powers are knitted into their body. In a pinch, a kishi may pull out one of his hyena teeth or snip off some fur. The kishi could sell them for enough money to keep comfortable for a few weeks. However, kishi hunters would behead them, selling the kishi head to wizards who studied the parts. Kishi blood, eyes, tongues, and even brains are sought after items in the darkest of markets.   Having an extra head does have its advantages. The kishi are always vaguely aware of their hyena's senses, this allows them to detect danger before they fully know the cause. They can also focus on the sight, scent, and taste of the hyena when necessary. Kishi can completely access all the senses from both heads together, giving them a 360 degree view of a situation. However, without intense training, accessing all senses for too long can cause dizziness or fainting. Kishi must also be aware of how long they are accessing their hyena's senses. If they are not careful, the hyena could take temporary control over their body.

A Zuvmurt elven fable speaks of the kishi who beguiles a young elf maiden to fall in love with him and give birth. It is only after she has the baby that she learns the truth about her mate. The kishi and their baby devour the elf alive and the kishi departs without remorse, setting his sights on another beautiful young maiden to seduce.   Perhaps this was true in a time long ago. More than likely, it was an allegory to warn young women know a man before agreeing to be his wife.

Most kishi prefer monogamous mates of their own species. In addition to ensuring the survival of their species through the birth and care of their offspring, kishi who wish to control their hyena must be cautious in matters of love around non-kishi folk. It would only take one moment of passion where they lost control of the hyena to kill the person they are with.   Kishi who mate with other folk give birth to either a kishi or the species of the other folk. There are no half-kishis. However, the kishi gene has been known to skip one or more generations, so two non-kishi folk could give birth to a kishi, not knowing they had a kishi ancestor. These babies are often hidden away, abandoned, or even outright killed depending on the culture.   Although there have been tall tales about a kishi controlled by their hyena side giving birth to an actual hyena, there are no known instances of this happening.   Kishi have a high likelihood of birthing twins. Offspring mature at a rate similar to humans. The average kishi lives to be around 100. 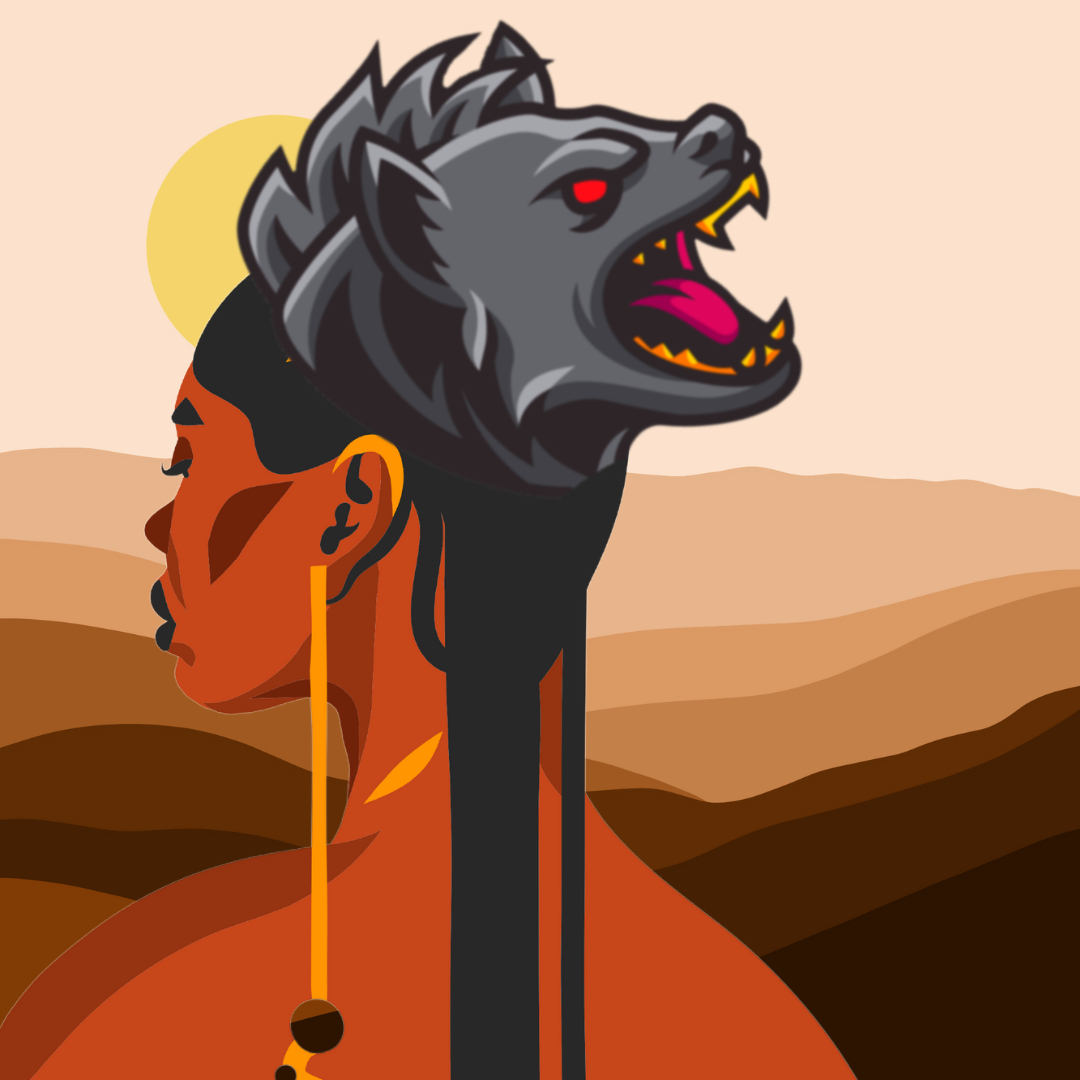 Beguiling Magic from a Kishi's Head

Kishi Tooth: When an intelligent creature tries to harm you, they hesitate. Once a day, when wearing a kishi tooth, you can cause a roll to miss you. This ability resets at dawn.

Kishi Fur: Something about your aura seems trustworthy. Once a day, when wearing a lock of kishi fur, you can cast friends or charm person without expending a spell-slot. The DC is 20. This ability resets at dawn.

Kishi Tongue: Your words are appealing; your reasoning precise. Once a day, when holding a kishi tongue, you can cast fast friends without expending a spell-slot. The DC is 20. The ability resets at dawn.

Kishi Eye: Your demeanor is mesmerizing; your presence overwhelming. Once a day, when holding a kishi eye, you can cast geas without expending a spell-slot. The DC save is 20. The ability resets at dawn.

Kishi Brain: Your aura is so imposing that even the most terrifying bow at your feet. Once a day, when holding a kishi brain, you can cast dominate monster without expending a spell-slot. The DC save is 20. The ability resets at dawn.

The largest tribe of kishi in the Mesa Dunes are the Venaksan. The kishi nomads are most known for their traveling circus, The Illustrious Imaginarium of Enchantment & Exploits. Their presence provides relief for many, as they travel with a water genasi. Though others regard them with suspicion. Perhaps the circus is a front to kidnap lost and wandering children. Or maybe the laughing, traveling troupe simply wants to spread wonder and mirth to the oft-solemn desert folk.
Geographic Distribution
Related Ethnicities
Related Myths

Answering: "a species considered monstrous by some"
Visit CassandraSojourn's Competition Page Check all other answers to this prompt Competition Homepage

The kishi are based off of Mbundu folklore of Angola, as well as general folklore about hyenas from around the world.

An interesting species with an interesting curse. Obviously always outsiders in any society but their own, they also have significant natural abilities (that maybe require leveling up to gain the feats). Nice article!

Definitely some leveling up to receive certain abilities. Glad you liked it!

I enjoyed the mix of myth and rumor from both the Kishi people and how other cultures perceive them.   "I have found any innate magic power has to be treated with care or it can consume you. I am glad some Kishi have found ways to manage their...hunger." - Lavani