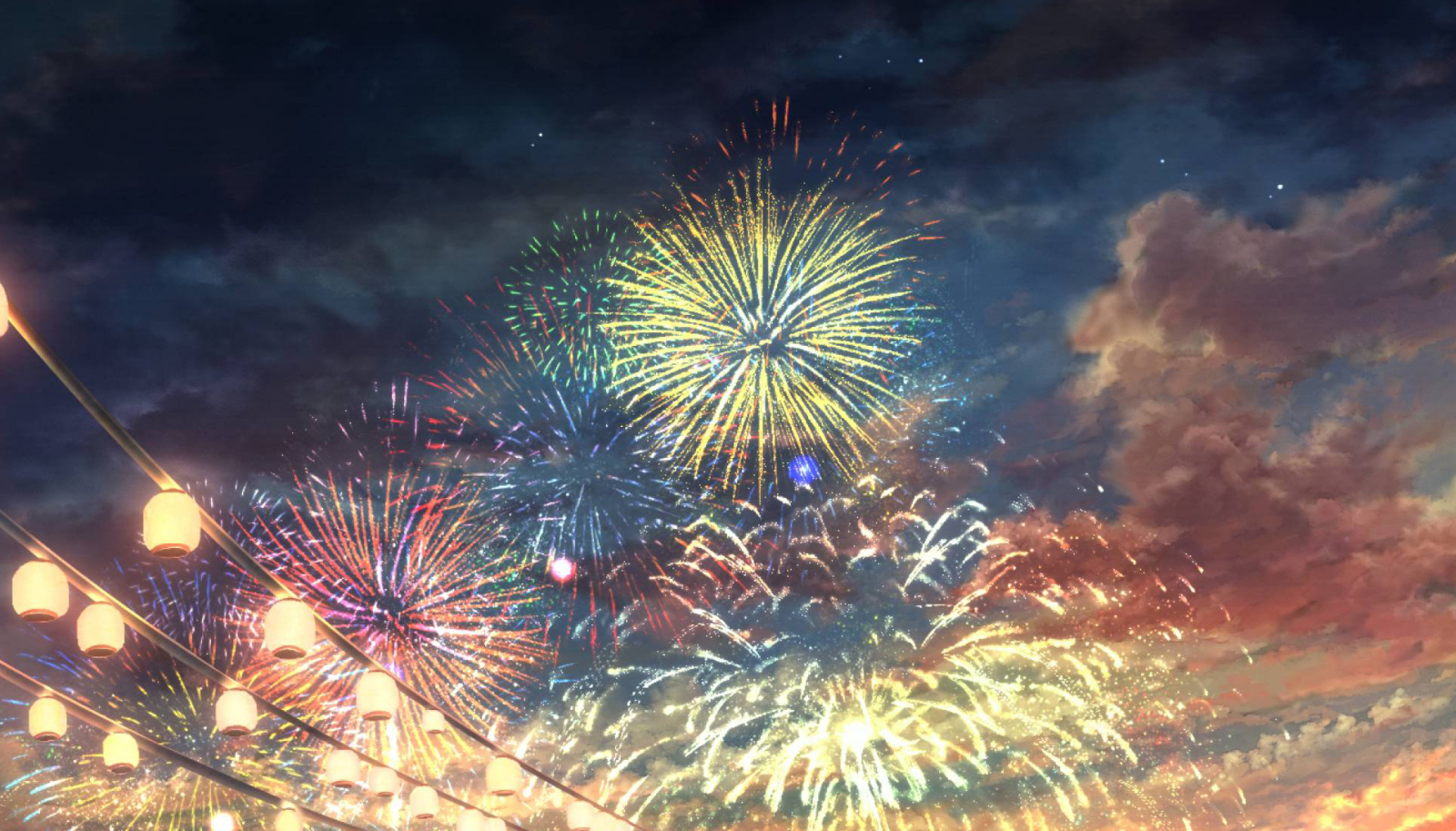 The gates to Curieux have come to a bottleneck with the foot traffic of travelers, from locals to foreigners and merchants and tourists. Young and old, of all races. From all over Conais and beyond. Each one braving the wait to pass through the grand walls of the city and reach the festivities within.

One step inside and the wait becomes worth the while. Banners of every mortal color hang from buildings, ribbons upon trees, and even swaths of cloth on horses and livestock. Around each corner, music rides on the air with dancing celebrants not too far off. One street may smell of the sweetest foods while another carries the scent of wood and metal work. In the distance, the lights, perhaps of magic or not, occasionally flash through the skies. During the Faenrul Festival, one can always find something to do.
— Manthom Viderecci, renowned travel journalist

In 2100 3E, House Conas held a celebration of the centennial anniversary of the establishment of Curieux at the Chateau de Curieux, which subsequently invoked all manners of merriment through the rest of the city proper. The popularity of the event led the royal family to make the occasion a yearly holiday to commemorate the anniversary, extending the festivities to a week long and dubbing the celebration as the Festival of Curieux. Over the years, the event gradually grew larger and larger as the royal family delegated planning and organization of the Festival to their vassals, who in turn involved the common folk in its preparations. From this act, the tradition normalized as an event involving the city in its entirety. By the year 5000 3E, the festival spanned the entire month of Faenrul and extended over all the quarters of Curieux, leading its current designation as the Faenrul Festival.   As the Faenrul Festival reflects the successes of Curieux, and to that extent, the kingdom, the magnitude of the celebrations fluctuates with each year. Some of the most lavish and grandiose Faenrul Festivals on record occurred during the golden age under Conas. While times of war more often crippled the kingdom than not, the city miraculously managed to maintain the yearly celebrations, internal political conflicts be damned. The succession of House Daramond to the throne saw the return of the exceptionally scaled and organized Faenrul Festival. The tradition continued in this manner until the ill-fated rule of King Edward II disrupted the standards of magnificence set by his predecessors. However, since the succession of Edgar I, the Faenrul Festival has once again worked its way to the lavish forms that Conaisans have come to expect of the occasion since the early Daramond rule.

The festival takes place in the city of Curieux, located on the southwest coast of the kingdom of Conais. It officially begins on the first day of the month of Faenrul, though preparations for the event tend to begin the day after the end of the previous festival. By law, all businesses in the city are mandated to participate in some fashion or another, though most citizens consider it as foolhardy to pass on the opportunities presented by the influx of people brought in by the event, and thus the festival becomes a citywide enterprise. Under Edgar I, legislation has been signed into decree that allows the city to maintain working days while also requiring employers to provide their workers with paid leave to participate in the festival's various events.   Mainly located in the Common and the Trade Quarters, local businesses open stalls to showcase their wares and services. Food stalls and exotic goods can also be found and are peddled aplenty. Artisan guilds organize exhibitions of their members' work. To do so, establishments must register for space, for an allotted time, with city officials for a fee depending on the specifications of the space and time requested. Entertainers perhaps find the most work during the month as they participate in both government-sponsored shows and seemingly impromptu performances on the streets. It is also not uncommon to see a street or two filled with stalls dedicated to games, limited forms of gambling, and revelry. However, the city government specifically outlaws the consumption of alcohol outside of the home or approved establishments during the active days of the festival. Religious organizations based in the city also take the time to carry out successive acts of charity by opening centers for the poor and sick.   In the Azure Quarter, Curieux's nobility and upper class celebrate the festival in somewhat more muted and severely more private settings. The month of Faenrul traditionally sees the most number of debuts, engagements, weddings, and other similar social functions of note among the Curian elite. An extension of this practice, the royal family holds a lavish gathering for invited guests at the Chateau de Curieux on the eve of the final day of the festivities.

The festival also includes specific, larger events for the consumption of festival goers, some of which are listed below.

In cooperation with the Conaisan government,the Arcane Society holds an exhibition called the Aizur Convention, in honor of the mother of magic, that showcases their members' works and achievements. The event lasts for the first two weeks of the Faenrul Festival and is typically held in the Mystic Quarter, in the vicinity of the Grand Arcaneum.   Members of the Society, at all levels, can present at the Convention so long as they have a completed and approved proposal. The categories for presentations include theoretical works(in the form of scholarly articles, books, etc.) as well as practical or hands-on projects (i.e. magical items, spell developments, etc.), with divisions for the appropriate schools of magic. Presented works can also be entered into contests, some hosted by the Society while others may be sponsored by private patrons or based on spectator votes. The rewards for placing can include monetary prizes, commodities, commissions, and, of course, prestige.   In recent decades, the Society has also held a magical combat tournament during the second week of the Convention. Competitors fight in magical duels in tournament brackets determined by their level of skill. In the spirit of safety, the range of spells that can be utilized has been curbed, along with limitations placed on others. As with the scholarly presentations, the winners of each bracket also receive prizes.

Arguably the festival's crowning event, the Grand Tournament of the Blades takes place during the third and final week of Faenrul. Held at the Coliseum of Derogen, the tournament sees swordsmen and swordswomen from all over the continent vying for the title of the Grand Duelist. Each participant fights in single elimination brackets with the victor of the challengers combating the current champion in the final match. However, in recent decades, the format for the later brackets of the tournament have occasionally given way to specialty events, instead of the standard elimination. The reigning Grand Duelist is Alexandre du Faeien.   Contestants are matched in duels where they must defeat their opponents in the martial art of swordplay. Though the use of magic is not prohibited, it can only be used to affect the user and not the opponent. However, certain schools of magic and spells have been banned from use as a result of past rulings, including the following: magic from the school of illusion as well as spells that purely deflect opposing strikes. Magic items are also allowed based on prior approval. Furthermore, harming one's opponent in any other way except by the use of a wielded blade merits an automatic disqualification as does receiving aid from outside interference.

Beginning under Edgar I's reign, the Faenrul Festival started conducting light shows right before midnight on each Arkrul of the month, for a total of three. Each show of the week becomes successively more grandiose and complicated than the previous, lighting up the skies above Curieux to fantastic levels. The final light show of the festival has been noted to combine usage of both fireworks and magic to mark the end of that year's Festival.

"They have singing and dancing! Lights! And magic! Oh, and funnel cakes! Galore!"
— An attendee of the Faenrul Festival 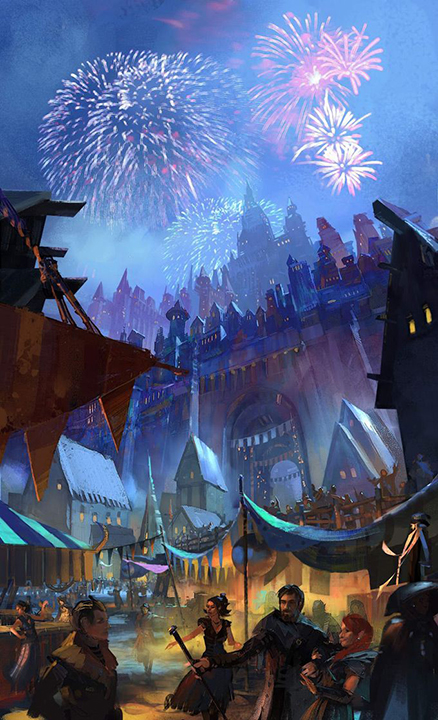