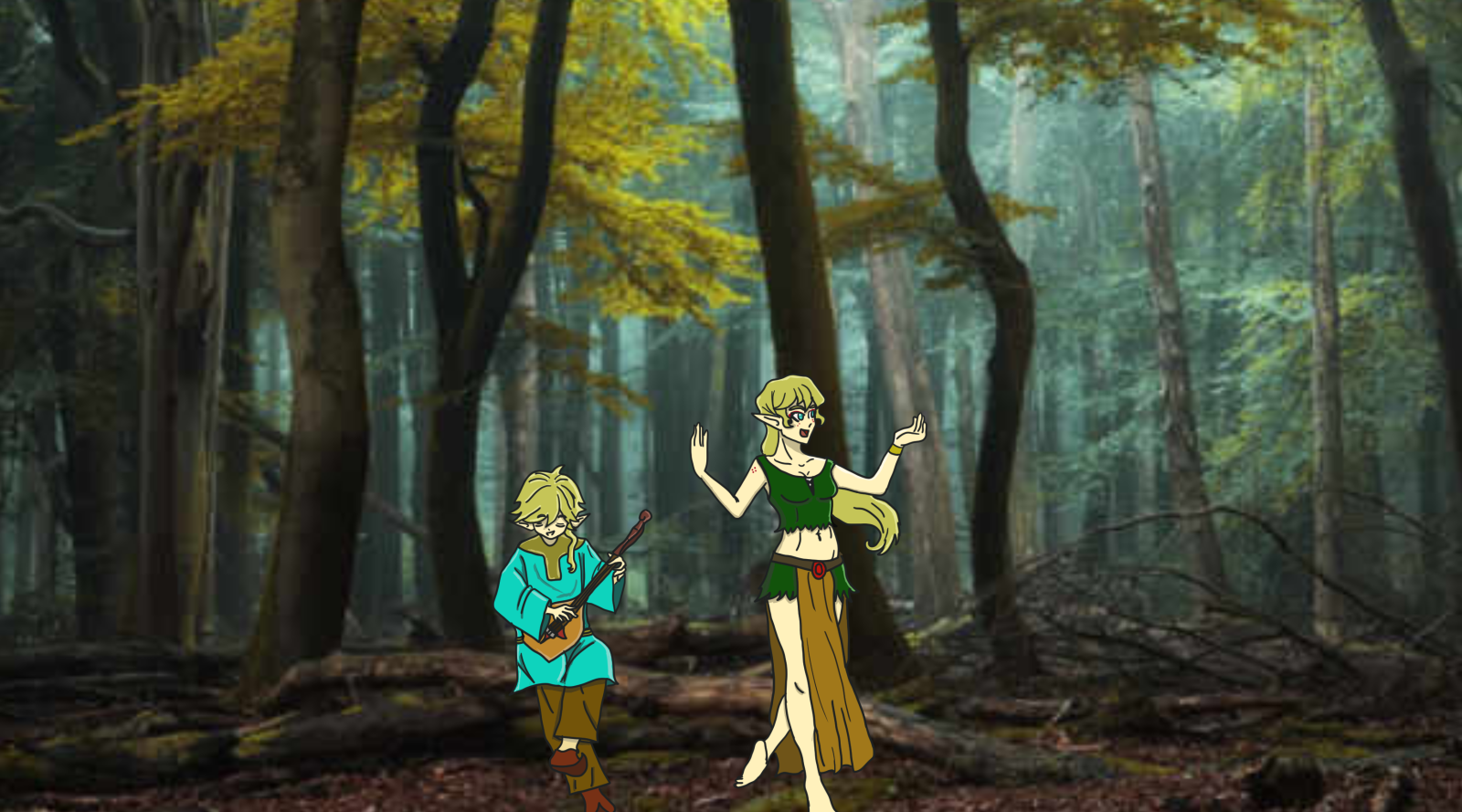 Festival of the Holy Tree

For centuries Elves have gathered together to pray to the Sacred Trees. This type of trees are believed to have magical powers and are also related to the Elven goddess of nature and fertility (which was associated to Tyr by the Davidovian Peoples). This ceremony takes place at the beginning of Spring, when the first flowers appear and is celebrated across the Elven realms and human realms that have half elf or elf populations.

The Festival in the elven realms

Holy Tree festival is the oldest one recorded by the elves and it is their most important festival. Records of the celebration of this festival date back to the early Bronze Age and the way the festival is celebrated hasn't changed over time. It is celebrated in every Elven realm, from the Kingdom of the Green Elves, the Kingdom of the Snow Elves to the Kingdom of the Sun elves and the Seris Empire's southern provinces.   Each spring, in each town or city the elves gather around the holy trees to pray and place their offerings at the base of the tree. First, a circle is drawn around the tree and little candles are placed in it. This first part of the ritual is performed shortly after dawn by the priest of the village and his assistants. Then before midday, the celebrants (both adults and children) begin to arrive at the site of the tree, and when they're all gathered they hold each other's hands and began to recite the prayers to the tree and the goddess asking them for a good harvest and for their protection. Then the priest of the village makes a libation of water in front of the altar and then proceeds to spread incense around the tree.   The final part of the religious ritual concludes with each one of the celebrants placing their offerings at the base of the tree. These offerings can be crowns of flowers, a piece of wood with an inscription on it, recipients with liquids, or a libation of honey, milk or water.   After this, a communal meal is held near the tree accompanied by music and bards. And after it ends then its time for dancing until night arrives!!. The food leftovers are distributed among the celebrants in order to eat them the following day. 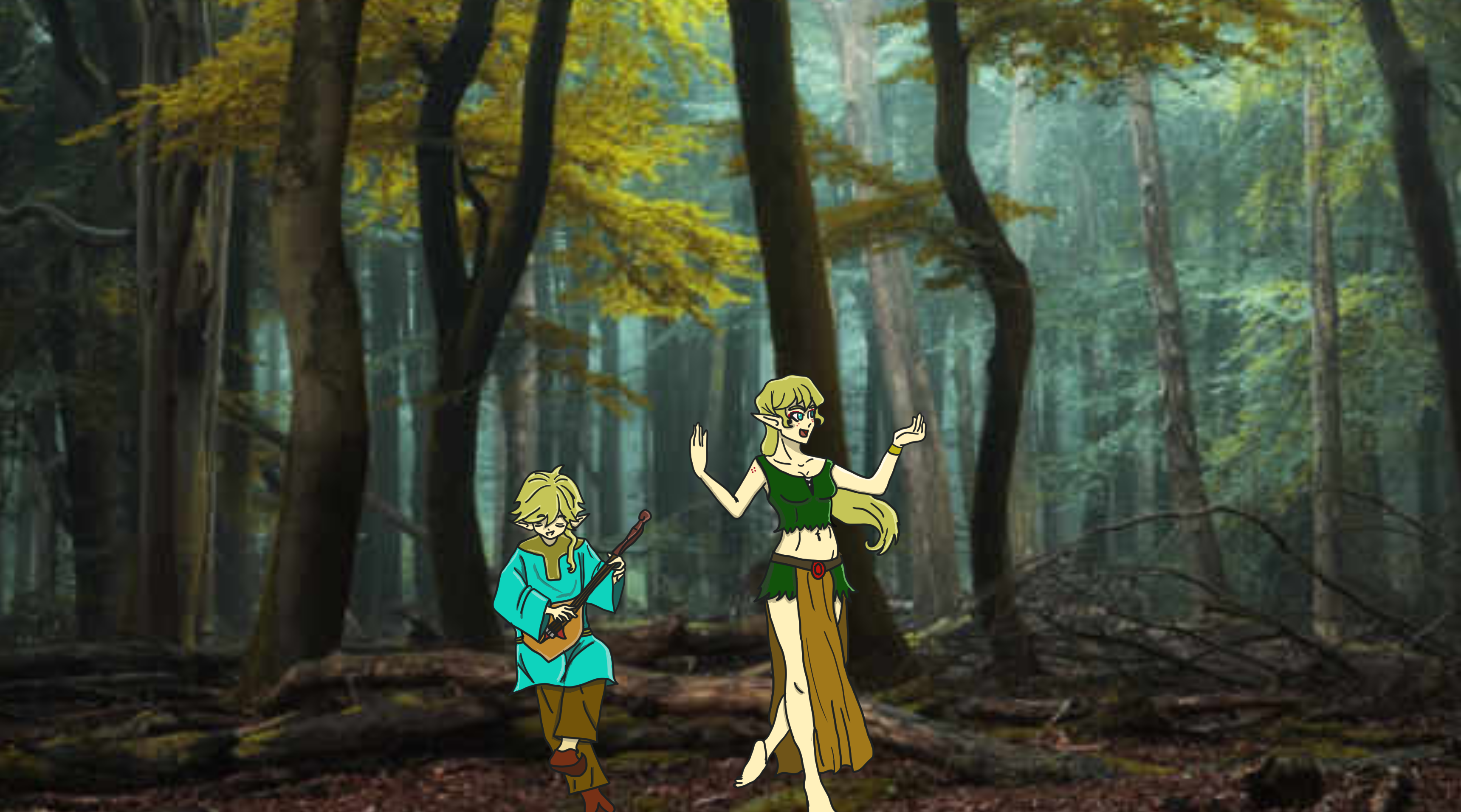 by Callyxtus
An elven couple dancing in the forest during the festival . Drawing by me

The festival in the Elvish-Oronai world

You know, we were kind of lost when we crossed the mountains, it was a foreign country, very alien to us. But this people in the Parana Valley... they were so welcoming to us. They gave us food and shelter and also Yuya and I enjoyed celebrating the Holy Tree festival with all of them. I participated in it sometimes with my father back in Seria. But here in Brire, the way they celebrated it is complitely different. Also, i've heard stories about the great oronai army that conquered the South and mixed with the elves, and there we were, drinking and dancing with the former soldiers of Boros The Conqueror and their descendants
— Nellerlë of Astan about the festival of the Holy Tree at the Parana Valley.

When the Oronai invaded the southern territories they encountered these elven traditions and festivals. And the first colonists and their descendants mixed their own Oronai traditions and beliefs with those of the elves, resulting in a new way to celebrate the Holy Tree festival. Elvish-Oronai also believe in the sacred trees and their power due to their syncretic faith. Each village and city has one sacred tree. They believe that the Goddess Tyr herself planted those trees and thus they've magical powers and they've to be venerated. The phases of the festival are similar to those practiced by the elven communites with slighly variations.     The night before the festival, everyone in the village goes to the "dancing pavilion" to dance and have fun (no alcoholic drinks are allowed that night and the only ones allowed are milk and water). The proper day of the elvish-oronai festival of the holy tree also begin at dawn. In this case no circle is traced around the tree, instead the tree is usually located in an square outside the town. Another particular aspect of this ceremony is that no libations are performed; instead, elvish oronai communites offer bread to the goddess and the tree (as a symbol of the arrival of Spring and thus fertility). Shortly after dawn, in the early hours of the morning, all male villagers go to the recint or square to pray and witness the offering of the bread they've prepared that previous week.   A bonfire is set in front of the tree where, later on, the priest, will trown the offerings so that the smoke and aroma of the bread will reach heaven and feed the goddess. When the priest lift the bread in the air and began the prayer everyone nails down and when the priest finishes the pray everybody gets up and watch how a couple of bread pieces are trown into the fire and how the assistants of the priest prepare the rest of the bread to be share among the celebrants. It is customary to eat this bread with sausages or cheese. 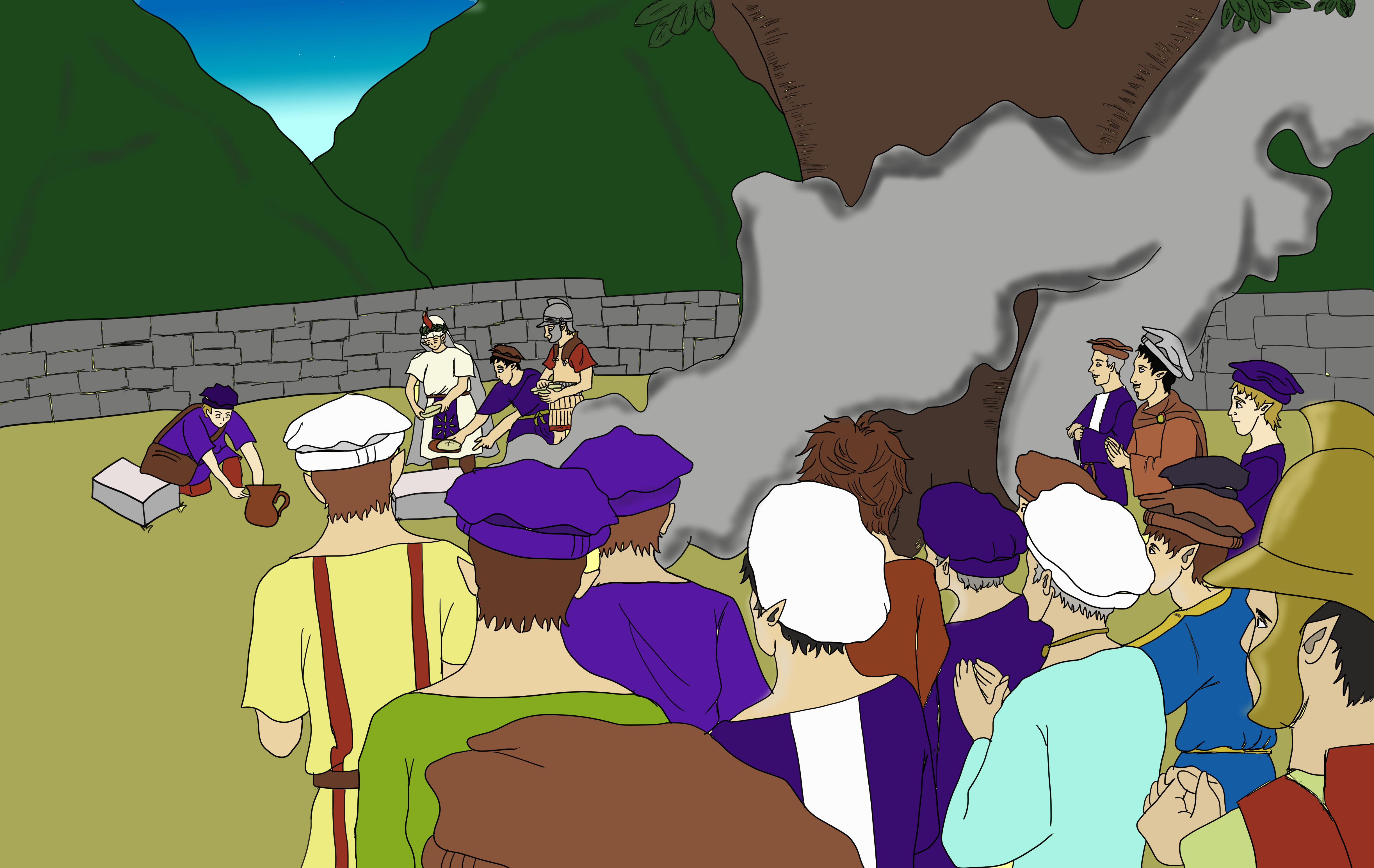 by Callyxtus
Festival of the Holy Tree celebrated by an Elvish Oronai community at a village in the Parana Valley. Ceremonies like this are celebrated across the Southern Territories. drawing made by me.   Then the celebrants return to the village where they have a communal meal (just like their elven relatives) just after the so called "dancing time before lunch" when everybody dressed up in their finest robes (usually silk) and dances while food is prepared. Later in the evening everybody assembles at the dancing pavilion to resume the party, dancing in circles around the drummers and musicians. Meanwhile the elders and heads of family assemble in the nearby hills, where they usually drink undeluted wine while hearing the bards singing or telling epic tales and also dancing until going into a trance (they drink so much that usually nobody works or gets up early the following day).   For the elvish-oronai communities this is the most important festival of the year and also a good momment for the youngsters to find a girlfriend or a boyfriend. As Lenonatos of Ythra once told Yuya and Nellerlë

Ahhhh... how many marriages have been formed or dissolved during the festival of the Holy Tree.

Intriguing artwork. The characters on top of a realistic forest photo makes them feel like they are moving to me.   I didn't think I would like the long text with limited headings but you have a compelling story in there! You wrap it back to your main characters too. I enjoyed reading it!

Excellent work! I especially liked seeing how the tradition is celebrated in two different areas.