You'd think after 200 years or so, the humans would understand that the chief of the Chwishatekyutin is not the leader of all the Shyanhol. And yet, just yesterday I saw a delegate from Ovuk call them a king. A king! And no such title given to the other chiefs in the League, who could equally claim 'rulership'. It's infuriating.
— Chief of the Wokru'ol

The Shyanhol League is a confederation of six elf clans located on Nowenkayet Island, off the east coast of Thurásin. Despite being only formally established in the year 7 Discovery, its core systems have existed for hundreds of years.

The elves who would later become the Shyanhol first migrated to the inland valleys of Nowenkayet hundreds of years ago, deciding the wealth of resources was mostly worth the difficult journey there and the regular attacks by powerful creatures. They set about adapting to the land, and as more groups made the journey to Nowenkayet, a system of clans slowly formed.   The amount of clans fluctuated due to migrations, conflicts, and disasters, but it eventually settled into a set of 5 primary clans - the Nu'ontinhol, Riklashuyol, Wokru'ol, Wisrowensa, and Sulayeshyutin. The five became friendlier with each other and eventually formed a complicated system of intermarriage and trade, and bringing smaller clans into the fold.   This system proved important for weathering The Collision, which tore Nowenkayet from the mountains and brought it into the human-inhabited realm of Tiyu Amara as an island far off the eastern coast of Thurásin. The clans adapted quickly, and expanded for the first time out of the valley to explore their new shores and cliffs. After many years of this, a 6th clan - the Chwishatekyutin - was brought into the system of alliances, reflecting their importance as the holder of the Nowenkayet coasts.   It was the Chwishatekyutin who would first make contact with the humans of Thurásin, greeting wayward sailors from the mainland nation of Muhepásin in the year 59 Ascent. While communication was made difficult by the utter lack of a common language, the Muhepásines sailors returned to their home with many gifts and well wishes.   In the following months and years, communication became easier as each group shared their language, and it became clear that many outsiders assumed the island of Nowenkayet was run entirely by the Chwishatekyutin. After discussions with the other clan chiefs, the clans formalised their long existing alliance into the Shyanhol League, which was run jointly by a council of all six clans, in 7 Discovery.

The Shyanhol League found itself in a good position to trade with the eastern Thurásin nations, and found itself being largely an exporter of 'luxury' items. Their work quickly found its way into the wardrobes of the rich and influential all throughout Thurásin, and alongside the delicate metalwork of the Sulayeshyutin, made the Shyanhol League fabulously rich.   This fame and money soon drew the unwanted jealously of the Ettioril Empire, a neighbour of the friendly Muhepásin who had previously been a major player in the export of fine cloth. After a series of unsuccessful attempts by the Empire to disrupt Shyanhol trade, they were able to come up with an excuse to declare war on the Shyanhol League in 18 Growth.   This war turned into a disaster for the proud Empire, as any attempts to land on Nowenkayet saw them battered by the Chwishatekyutin, and efforts to fly there by Dragon proved fatal when they were shot from the sky by scores of archers all throughout the valleys and mountains. Furthermore, the strong relationships that the Shyanhol League had built up through trade to countries like Muhepásin and Lawaguum came in handy, as both countries leveraged their own long standing diplomatic ties to bring more attention to the situation in the eastern seas, and allied navies soon came to sweep the Ettioriles ships away. Ettioril surrendered in 19 Growth, and has tried to forget about the incident ever since.   The League weathered the Rainbow Plague of the era of Famine rather well compared to its closest neighbours, though the silk market suffered due to the deaths of the majority of silk worms used in its production. The damage to the League's economy slowly recovered along with its people, and it has spent the last few eras in peace and prosperity. 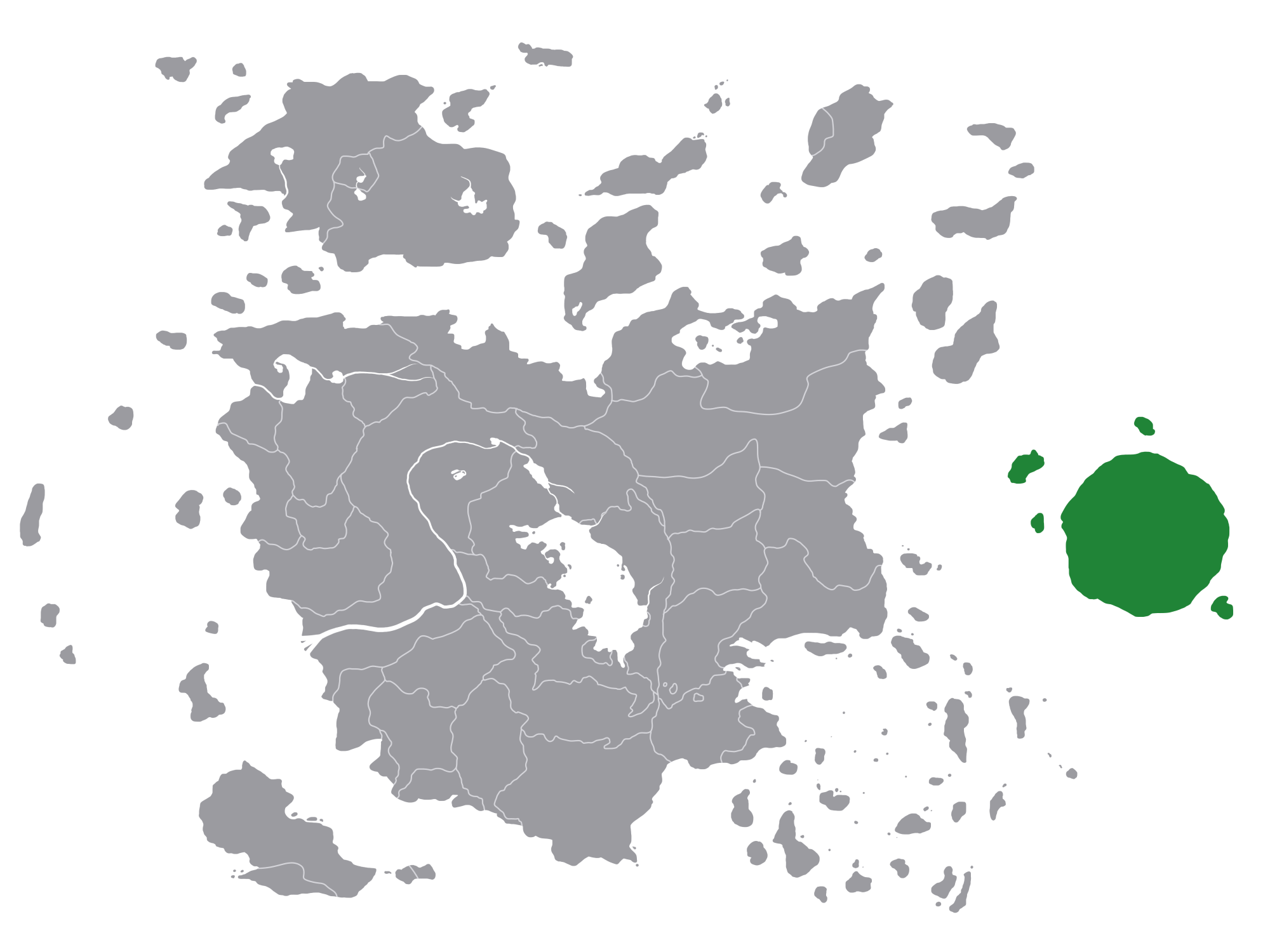 The Shyanhol League is a confederation made up of 6 elven clans - the Chwishatekyutin, Nu'otinhol, Riklashuyol, Sulanyeshyutin, Wisrowensa, and Wokru'ol. The leaders of each clan meet up regularly in a specially designed building in the center of the island to negotiate deals and form consensuses on international affairs. Outside of these meetings, and a week-long festival held every two months which involve most of the Shyanhol, the clans and their territories act almost like separate countries.

The youngest of the 6 clans, the Chwishatekyutin hold the lands outside of the Nowenkayet Valley. They are predominantly fishers and sailors, and have the most contact with the other peoples of Thurásin.

The Nu'otinhol are possibly the oldest of the 6 clans, and hold territory in the eastern part of the valley. They are predominantly herders and hunters, producing most of the non-fish meat in the League.

The Riklashuyol are a fairly old clan, and hold territory in the north of the valley. They mostly deal with growing crops such as cotton and wheat, and have many fruit orchards. They make the best bread and wine in the League.

The Sulanyeshyutin are one of the younger Shyanhol clans, and hold territory in the mountains around the valley, especially east and north. They are miners and metal/stoneworkers, and craft stunning jewellery.

A young-ish clan, the Wisrowensa are semi-nomadic, roaming Nowenkayet Valley on a rotational basis. They are lumberjacks, carpenters, and architects, and often do odd jobs for the clans whose lands they pass through.

The Wokru'ol are an old clan, found mostly in the west of the valley. They are silk farmers and weavers, crafting many of the more extravagant clothes found throughout the League. They were responsible for the Silk Crisis. 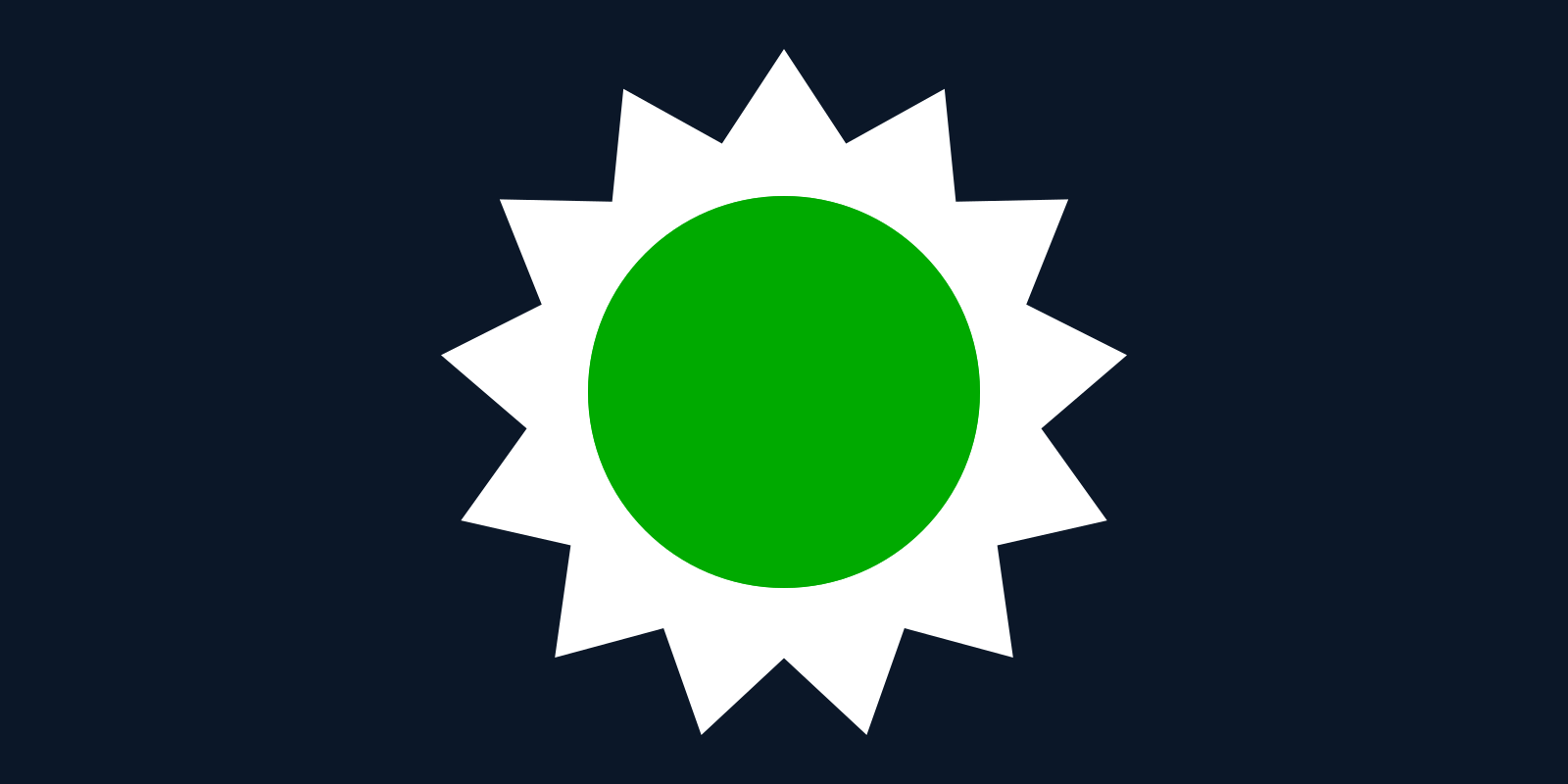 One of its most common exports during the early years of the Shyanhol League was so-called Shyanhol Silk. This was cultivated primarily by the Wokru'ol clan and dyed in many vibrant colours, and was renowned for its quality and magical properties. Many nobles from across the continent flocked to the league for its silk, and the Wokru'ol quickly rose to meet the demand.   This increase in supply came at a significant cost. Measures in place to protect the health of the silk worms were not followed due to the time and costs associated, and slowly the silk worm population began to decrease. Once the clan realised what was happening, they scrambled to cover it up while they tried to solve the issue.   The cover up was discovered during the Era of Famine, as many silk workers caught the plague and had to be replaced temporarily with members of the Riklashuyol clan. Upon realising something was amiss and reporting it to the clan chief, silk exports were banned by the council to allow the Wokru'ol to fix their mistake. The clan is still sore about the economic results of this decision, and the backlash to their handling of it. 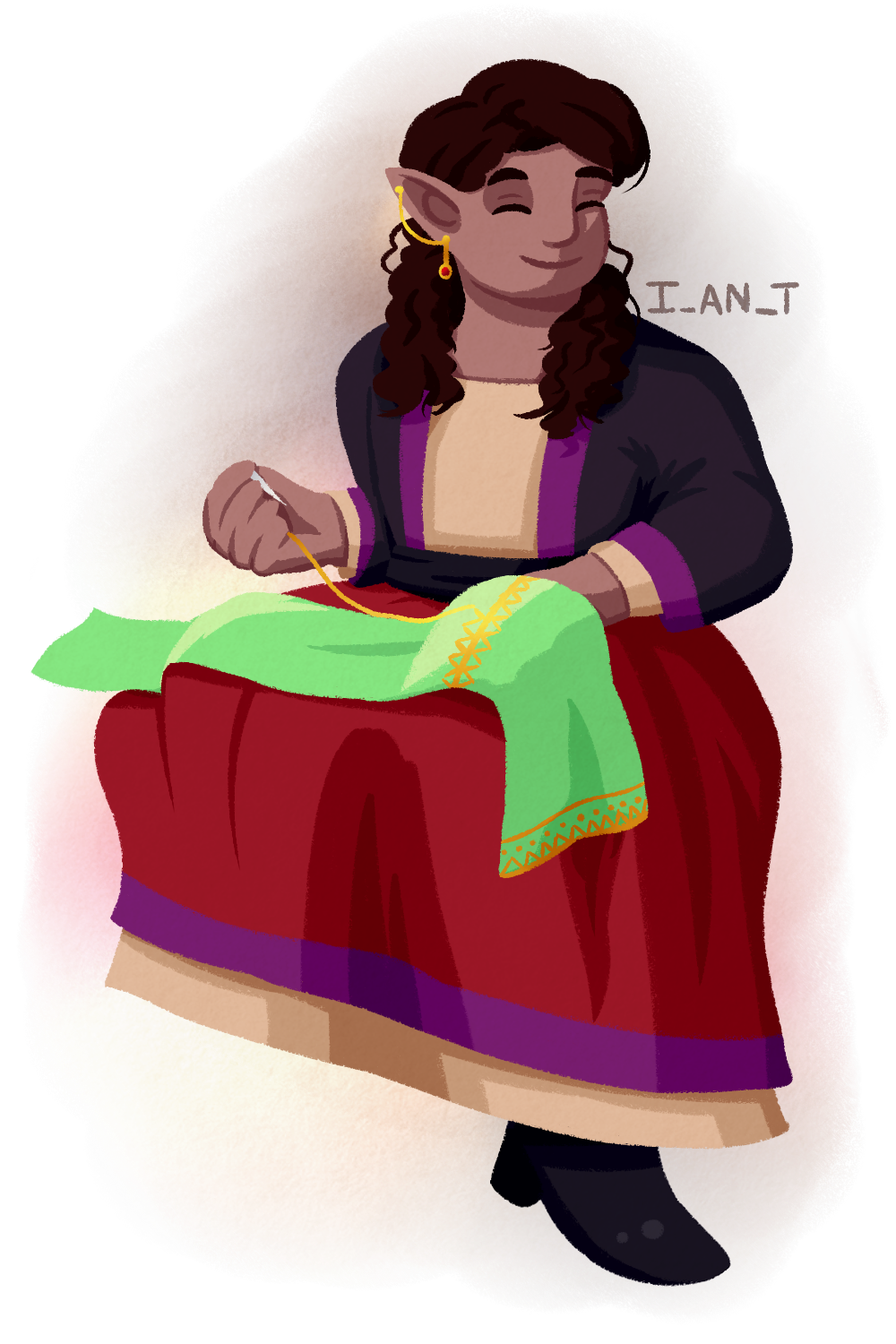 Prior to the arrival of the Shyanhol clans to Tiyu Amara, they had been distant neighbours to many other elves. The closest of these neighbours appears to have been called either the Li'altum or Arahol, the 'People of Heart', who lived near a great lake known as Li'anka.   Some, particularly those who have visited the Dyiiladuun Fleet memorials in Lawaguum, have suggested the Li'altum may in fact be the Lialpumpámtii elves of Abravost. Unfortunately the sole representative of that group known to Thurásin, Captain Jemi of the Fleet, has been dead for thirty years, leaving the theory unconfirmed. It also raises many questions amongst those who study The Collision as to how two neighbouring groups could end up so far apart.

The flag of the Shyanhol League consists of a dark blue field with a 13-pointed white star as its central charge, at the centre of which is a green circle.   The dark blue represents the sea that surrounds Nowenkayet Island, and which separates the League from the rest of Thurásin. The white star has a few meanings, chief among them being the mountains which surround the central valley on Nowenkayet, and to represent all the members of The Divinities by whose grace the League continues to survive. The green circle either represents the fertile valley itself, or the island as a whole, the latter being a more common interpretation among the non-valley living Chwishatekyutin.   This flag was adopted by communal vote among the League, from a long list of entries presented by each clan. The proportions of the flag were inspired by those of the first Thurásin nation the League encountered, Muhepásin.

A small logging settlement in Eastern Nowenkayet, belonging to the Wisrowensa clan