Life has given us differences. We are all different, but there is no better or worse species. Because even in the "best" species, there can be the worst elements. We must make a choice: live together or kill each other to live alone.
— The visionary

Founded by The visionary, the SIGMAR's cult (a.k.a. The Cult or The Way is a religion which preaches respect, sharing and understanding of different cultures.   People respect the foundations of SIGMAR, transcribed in The Somme. SIGMAR teaches precepts and concepts of life. The Somme can therefore be defined as a list of rules of good conduct. SIGMAR is by no means a religion linked to a supreme being, but it is an art of living in harmony with the world and especially with other species.

Priests : The Sigmarytes follow the teachings of the Priests, those who are in charge of spreading The Somme and its teachings. Priests are very involved in the life of Sigmarytes to better guide them.   Bishops: Like priests, bishops have the same functions, but they are less numerous and are often scientists or researchers besides being bishops. They are also responsible for informing and managing the Priests.   The Sparks: The Sparks are a particular authority, and are mostly messengers 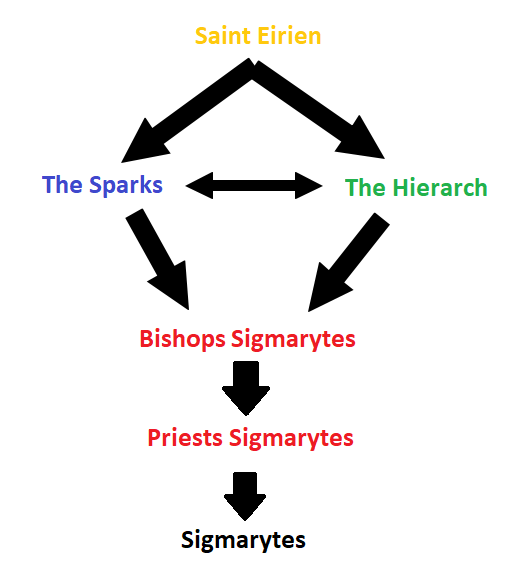 of The visionary. In addition to preaching the Somme, they are the personal guards of the visionary and they can be sent around the world to go to the front for example, to protect the wounded and sometimes even stop the fighting.   The Hierarch: He has the same authority as the Sparks but that function is different. Although the visionary is deeply involved in worship, he represents him and speaks on his behalf. It is him who manages the Temple City and who takes care of the good functioning of the SIGMAR's Temple. He is the number 2.   The visionary: The one at the head of the cult is obviously the one who founded it, The visionary. It is useless to mention the fact that it obviously combines all the functions mentioned above. He is the symbol of worship and the voice to follow.

The purpose of worship is simple: to bring the world to live in harmony as before the Fall. The Humans lead a war for the honor of their creator, Drovil, but the Cult seeks to remind them that it is above all a lack of respect for the creations of all The Ancestors.   Originally intended for humans, the cult is also aimed at all those who wish to continue the Great War and who therefore aims to try to change their minds. Saint Eirein's will is also to stop the increase in the number of victims who exceeded 3 billion and also the devastation of ecosystems and lack of respect toward the living in general.

The SIGMAR's Temple and Temple City:
Of course, the Cult has its own temple, but a city has been built around it, and numerous brand establishments have been founded there:
The World Anvil:
A powerful artifact created by The visionary and that can manipulate the world. Behind this affirmation, is actually hiding the power to create its own rules of physics, but it is mostly a tool that only him can manipulate thanks to his powers.   Myrieth:
It is another plan that welcomes the souls of the dead. Created with the World Anvil, it is an alternative to the crypt when a soldier dies and we can not find the corpse to honor him.   The Sparks:
Even if it is neither their function nor their purpose, they are considered as a private army or rather a special force tasked with protecting and serving the people.

The birth of the Cult

Founded on the 7 Eratis of the year 11 972, the Cult began with only The visionary and Janet Valsys as members. It was not really a Cult but a school made to provide new resolutions to young people. Those resolutions would become the wisdom oaths and rules of knowledge of the Somme.
Time passed and children were not alone in listening to the couple's teachings. The class was transformed into lectures and then speeches. One of them suggested that because of the size of the class, it may be necessary to consider continuing to grow it, but some things would have to be changed.
But as the number of students grew, so did the opponents. Denouncing as a fanatic, it would still be slanderous to say to stop these classes in Saint Eirien. He was then cordially invited to relocate the place of what became the Cult. It was therefore decided to go into exile in order to obtain more credit and thus have a greater impact on the spirits.
The SIGMAR's Temple was then founded and the Cult established itself there. Formalizing the SIGMAR's Cult, Janet Valsys was named Hierarch and the most fit became bishops and priests, while the devotees became Sigmarytes.
For their first action, Dimitris and Janet embarked on a major propaganda operation. In order to attract attention, the visionary went to the battlefield, caring for the wounded or even standing against the fighters, while Janet went to the back of the lines to convince everyone she crossed by questioning them all with this question:

Do you know the Way ?

.
The number of devotees then grew exponentially and they managed to convince influential people and surprisingly even their daughter, Selena, who did not support the project of her parents.   With the influence of the Temple, many settled nearby that led to the foundation of Temple City. With that, The visionary earned the necessary influence to increase the effect of the Depression.

The Cult on a new territory

With the founding of the Xiantia Empire in 13 892, The visionary thought he was facing a problem. Temple City was now on the territory of the empire and it would then be legitimate for the new emperor to demand accountability. But when he thought he was falling on a warlord, he found himself confronted by a scientist and even an admirer. The Black Hand was very cooperative with the Cult and even granted immunity to Temple City. But it was not unconditional, since the Black Hand asked for a close collaboration with the The Congregation of Shadow and a right to look into the affairs of the Temple.   This association greatly changed the empire. The manners, the points of view and even the methods were greatly influenced. Today we find the Somme in school books and often in the bedside tables of the inhabitants. But this does not limit that to the Empire, the Principality of Rande is also very affected by the lessons of the Somme.   According to several studies, the presence of the SIGMAR's Cult would have preserved the lives of many people by stopping the fighting or by pushing to desertion. 1 out of 3 soldiers was deserting the ranks at the end of Depression. It is estimated that without the SIGMAR's Cult, the losses would amount to 9 billion, or 3 times more.

Perhaps the end of the Cult ?

Despite the influence of the Cult, he is now threatened. With the end of the Depression and the technological rise of Theocracy of Homeca, the fighting has resumed but even the strongest nonviolent faith can't stand against an army equipped with tanks and machine guns. Despite the action of the Sparks, nonviolence may cause the loss of thousands of people and the order established by The visionary may collapse with the Cult. Unless an intervention from him or another country, the fall of the SIGMAR's Cult would begin the fall of Celerind, the country of the Elves, which would then drop the Alliance of Baram and all this leading to the victory of the Theocracy of Homeca.

Existence is a sum of effort. 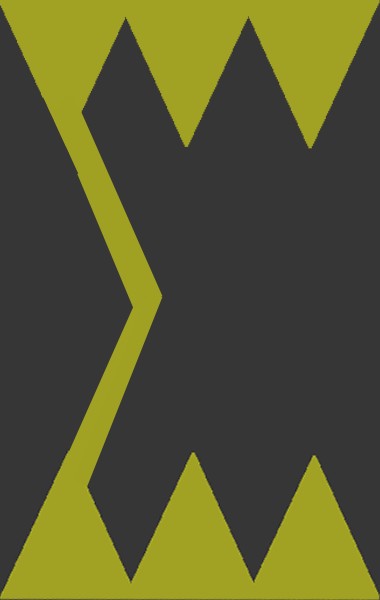 The Fall:
The Fall corresponds to the year 0 of the Anathemian calendar. 4 years after the disappearance of their creators, the nine races began to attack each other and the cohesion between the peoples collapsed. But it was not until 25 years later that the worst happened, when the Humans launched the Great War against the world.   The Great War:
This is not actually (drink) a World War, because not all the world or species are involved in this war. It is called Great because that it lasts since 14 000 years.   The Depression:
The Depression is a period of time which began in year 11 715 during which the battles of the Great War are drying up and decreasing both in number and in violence thanks to The visionary. It ends when Charioce 1st ascend to the Homeca's throne in year 13 953.

Entry for Rise to Power!