"Villians! Lay down your arms! You have fallen into the shade, and I am here to bring you into light, by any means necessary! Alítheia sto fos!"

The Mother Superior rests on Sundays, for obvious reasons.

Through years of crime fighting, the Mother Superior has refined the body of Niles Bennet into a fighting machine, built for speed, covered in scars, and cut with lean muscle. Niles disguises it during the day with loose fitting clothes befitting his station in the church.

The Mother Superior wears traditional armor of the Nightstalkers, leather and gilded steel, her face covered with a chainmail veil. The armor has been updated with modern appointments, including a kevlar and carbon fiber reinforcement. The veil provides a heads up display with communications gear and feeds hacked from the cities various news outlets, law enforcement databases, and ancient knowledge from the archives which Niles has entered into databases to preserve for posterities sake. She fights with a variety of swords, maces, and halberds all made from modern ultralight alloys. She prefers bows to guns.    None of these updates are visible from the outside, by all external appearances the Mother is some sort of medieval soldier with the golden sun emblazoned on her breast.

Niles Bennet was a faithful and humble servant of the Illuminated Church of the Golden Sun, a low level archivist responsible for couriering documents and stemming the rising decay of their churches library. One fateful night, he pulled a dusty tome from a shelf and a secret door opened, revealing a staircase descending into darkness. Deep below Edge City, he found secret archives of the Church. In the center was a body covered in a funeral shroud, apparently undecayed. On touching it, the body blew into dust filling Niles nose and lungs.   For unknown reasons, Niles swore to keep the archives secret. But night after night, he found himself frought with dreams of running the roofs of Edge City, striking out from the darkness and bringing justice to the poor and vulnerable. At the same time, he began reading in the paper of an armored vigilante, a woman of great skill and guile who left whole gangs battered and beaten for the police to arrest.  He awoke with bruises and bandages cuts, each movement painful. He thought himself mad, certain he was haunted by Shades. He dared not speak to the Sisters at the church for fear of being shunned. He returned to the archive in the hopes of finding answers.   There he found a makeshift base, flush with weapons and equipment. A text was laid out for him, a journal of the Mother Superior's exploits, in Ancient Greek, addressed to him and him alone. He was the Mother Superior, possessed by ancient spirit to hunt the Shades which were corrupting the world and Edge City. He set out to help the Mother: updating her equipment with modern materials, providing research and surveillance on her targets using the newest technology, and seeking allies for her cause.

As Mother Superior, Niles fully believes himself an immortal spirit and woman of the cloth. She finds reference to herself as a 'he' insulting and warrants severe and often violent response. Her dress and movements all portray that of a woman.

Niles spends his days in the employ of the church, maintaining the school library at the Saint Anastasia Orphanage and School

Those few who have learned the Mother Superior's secret identity believe him quite mad, with his religious fervor and questionable stance on Shifters. All of his behavior points towards heavy trauma in his past and serious dissociative identity disorder. Whatever his believes, however, one cannot argue with the results of the work of the Mother Superior in her fight against crime and corruption.

The Mother Superior leads a group of Illuminate youth, all orphaned, in her crusade. She is training them to be a new generation of Nightstalkers, given that all of her order fell in battle centuries ago.

Both Niles and the Mother Superior as doggedly faithful to the tenants of Illumination, but have little faith in the church as it stands today. Niles struggles with this dichotomy, but the Mother Superior is certain that the clergy has fallen into Shade and needs rescuing.

Niles is humble and affable, a quiet bookworm.   The Mother Superior is full fo religious manic energy and openly judgmental of any who eschew her beliefs. It is very off-putting.

Mother Superior plucked Vendetta from Saint Anastasia Orphanage and School to be a Nightstalker. When she was kicked out by the chosen captain, Vendetta tried to go it alone with dangerous focus. In order to save her from herself, Mother took her on as a student again, finding her a new group in the Vandals.

Both Mother Superior and Niles are near destitute.   Niles humble salary barely allowed him room and board. His position in the church brings him into contact with all sorts of Illuminates in Edge City, some open and other closeted. Many of these come from old money, and through careful diplomacy Niles has found those who support the Mother Superiors campaign against corruption. While the Mother Superior appreciates the tools provided, she doesn't consider any of it necessary for her war. 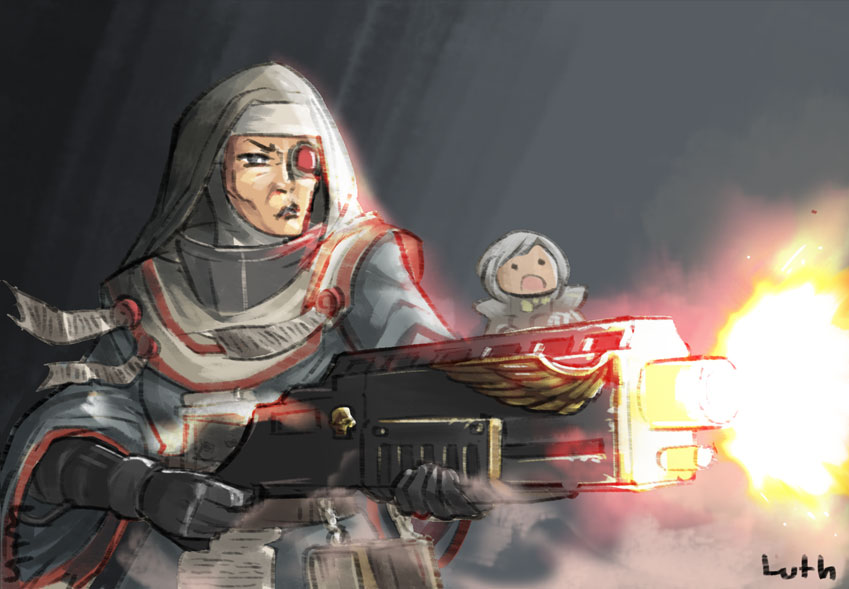