"Katanya Xira - master of the seas, Saint of Avadi, greatest explorer the world has ever known. Millions of Avadian wayfarers have tried to live up to her glory and every single one has failed."
-Stovas of Avadia, keeper of Stovas' Taverna, educating foreign guests about Katanya Xira.

Katanya of Pera, also known as Katanya Xira, was a legendary explorer, sailor and folk hero of the Avadian Sovereignty. She is renowned for expanding Avadian influence into the continent of Calina and into the Sapphire Sea, making contact with the Ranata peoples, discovering the location of the settlement of Maganti and establishing trade with the Free City of Kas.

Katanya is depicted as a woman of average height, with well-toned muscle structure and an athletic build. She was said to have exceptional endurance and agility.

In all artistic depictions, Katanya wears a teal tunic and sailing trousers, with a dark sash. Other depictions show her wearing a sleeveless leather jack over her tunic, although this sometimes replaced with a bronze pauldron strapped to her tunic. She is often depicted with an Avadian khopesh, either wielding it or with it belted to her waist.

Katanya Xira was born Katanya of Pera in 275 DoM, 744 years before the present day. She was born and grew up in the trading port of Pera in the southwestern Beyan Archipelago. Her parents were both maritime workers; her mother was the captain of a trader vessel, while her father was a fisherman. Even as a youth, she was drawn by the lure of adventure and excitement, building her own felucca and rowing it all around the waters of Pera. When she was a teenager, she worked aboard her mother's penteconter, the Merid's Dream, beginning by running water to the rowers. As time passed, she took on more and more responsibilities, and at seventeen was elected quartermaster of the Merid's Dream by the crew.   Katanya's rise to glory was borne of tragedy, when on a routine freight run to Port Avadia, the Merid's Dream was battered by a freak storm. A number of hands had been swept overboard by a great storm, including Katanya herself, who was plunged into the waters of the Calinan in the dead of night. Her mother plunged into the waters to rescue her, managing to pull her to the edge of the vessel where she was hauled back aboard. Before her mother could be pulled aboard, a rogue wave battered the vessel and tore the captain loose from the ship. A horrified Katanya led the search in the waters for nigh on two days, but her mother never resurfaced, and was believed to be tragically lost at sea. Thus it was at the age of twenty-two, Katanya was bequeathed command of the Merid's Dream.   Not content with routine trade runs throughout the Beyan Archipelago, Katanya spent most of her early years in command of the penteconter venturing to the nascent colonies the Sovereignty had established in the southwest of Arikanda. Before she turned twenty-one, she had moored in ports as varied as Denato and Ormond.   While these trips fueled her wanderlust and drive for adventure for a time, Katanya still felt stifled at always travelling where other Avadians had been before, and yearned to make greater discoveries into unknown lands. So it was in 253 DoM that she took to the tavernas and markets of Port Avadia to recruit for one of the most ambitious endeavours yet; to establish an outpost on the northern shores of the continent of Calina itself. This feat had never been completed before; while some intrepid souls had successfully crossed the Sea, they had never been able to find suitable places to land, confronted with either stark, unpassable cliffs or stark desert.   Many rejected the offer, believing it to be a fool's errand. The more ambitious and devil-may-care of the Avadians, however, decided to take on this voyage, and so it was that at the age of twenty-two, Katanya sailed the Merid's Dream across the Calinan Sea and across the coast of Calina. While encountering what seemed to be endless stretches of unviable land, Katanya stayed the course, and after weeks the vessel finally came across lush, habitable lands in present-day Maganti, with plentiful water and food.   Thus it was that Katanya and her crew landed at the foot of Mount Andanao and built a small outpost. After weeks of exploring and scouting, the ship returned home - and returned three years later at the head of an Avadian flotilla of colonists, who began construction on the settlement of Maganti. Katanya remained with them, alternating between supply runs from Port Avadia and helping plan the colony's development. 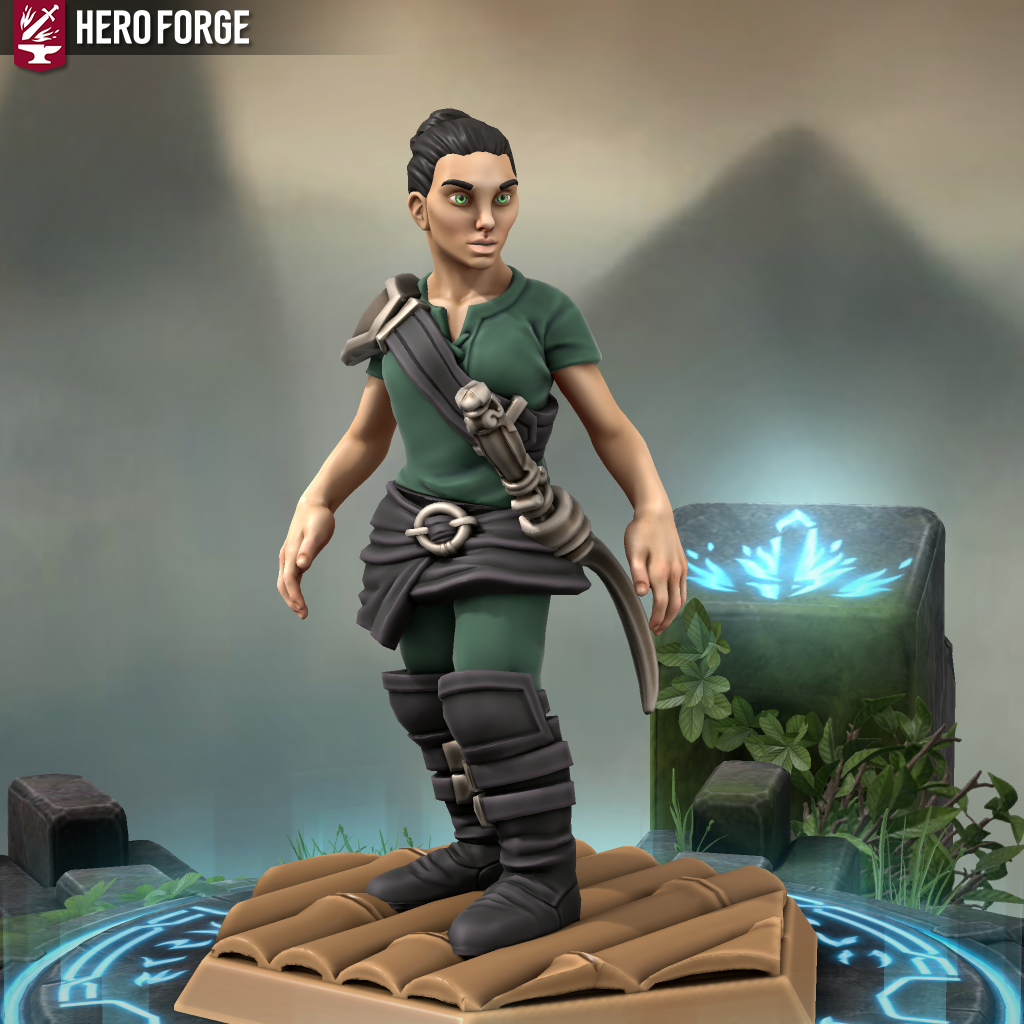 A typical depiction of Katanya Xira
For a time, supervising the development of the colony seemed to satisfy Katanya's drive for accomplishment and exploration. As more people came in to the colony however, and as it began to become another Avadian trade post, Katanya again felt the urge to explore on an even grander scale, this time to follow the Calinan Sea to its natural end. It took her seven years to mass the resources, influence and crew needed to undertake such a journey, but at the age of thirty, she sailed out from Port Avadia to Ormond, and from there hugged the coast of Arikanda, passing the city of Mayoka and other Tanorite and Sapphran cities alike.   After months of sailing and exploring, the Calinan Sea began to narrow, and the edges of Arikanda and the continent of Sembar draw closer together. Finally, Katanya witnessed the sight of the great Free City of Kas, built across both shores and over islands in between, forming a bridge between the two continents before expanding out into the Sapphire Sea beyond.   The Free City dwarfed Port Avadia, and some said even challenged the glory of Helik or Var Kalriv. New peoples and cultures from the Sembarine continent were met by Katanya and her crew, and they traded in silks, incense and spices unheard of in the Sovereignty.   When Katanya returned to Port Avadia a year later, she was lauded by the Avadian Sovereignty, whose commerce and wealth boomed even further with the vast new trade networks and opportunities opened. There was even a movement among the people to restore the title of Sealord and grant it to Katanya. Katanya, to her credit, refused this offer, believing her place to be travelling and exploring rather than ruling her peers from a palace. To that end she continued to sail the entire Calinan on both shores, and not infrequently passed Kas into the Sapphire Sea itself, trading up and down the Sapphire Coast.   While Katanya never again achieved the monumental discoveries on the scale of Maganti and Kas, adventure was never far away in her life, and while she amassed great riches from her journey, she seemed less interested in that so much as the endless journey, regularly donating her wealth to fund other expeditions and educate and train more Avadian wayfarers. She never married or appeared to have any romantic liaisons, more interested in her ship and adventures than romance.   As she drew to the end of her life, rather than live out the rest of her days continuing to get older and less mobile, Katanya made the decision to take the Merid's Dream on a final voyage. Assembling a crew, many of whom had served under her for decades and were also near the end of their years, she set sail towards Kas one last time. This time, however, she did not stop at the Free City, continuing past the Straits of Kas into the Sapphire Sea.   During this journey, she found her way to the Ranata Isles, making contact with a Ranata tribe known as the Laluii tribe. First contact was cautious, but Katanya eventually befriended some the more curious scouts, and stayed with them for a time. She did not, however, take the news of the new tribe back to Port Avadia. Instead, she continued to sail beyond the Isles into the stretches of the Sapphire Sea, and was never seen again.   It is unknown what became of Katanya beyond the reaches of the Sapphire Sea. While the general consensus is that she was lost at sea or perished somewhere in Sembar, many people do not believe such a legendary explorer would simply become lost or be killed. Rumours abound of all kinds of fates; that she discovered and became queen of a great nation in Sembar, that she found the legendary Merids and lived out her final years with them, that the goddess Avadi herself took Katanya to the heavens in honour of her achievements and indomitable mastery of the sea. It is a question that may never be answered.

Katanya's achievements have become legend, and she is considered the archetypical image of the Avadian wayfarer captain. Her charting of the northern coast of Calina spurred a second great wave of Avadian expansion into the Calinan Sea, and her help in founding Maganti paved the way for the unique cultural blending of Avadian and Calinani peoples to take place. In this sense, she even had a hand in paving the way for the legendary Orders of the Elements in that city.   While that in alone would see someone enter Avadian history and legend, her second great voyage to Kas gave rise to countless trade routes between the Free City and cities on both sides of the Calinan Sea that last even today. By passing Kas into the Sapphire Sea, Katanya also opened the doors to maritime access to the cities of eastern Arikanda and allowed the Avadians access to markets that had previously been dominated by land routes held by Sapphran traders, upending the state of trade in the Coast and allowing the Avadian Sovereignty even greater economic power in Arikanda.   To some, Katanya's accomplishments even go beyond the mundane, with some naming her the Saint of Avadi and believing she had been sent by the sea goddess herself. A statue of her overlooks the lighthouse in the great double harbour of Port Avadia, an honour unheard of among other Avadian figures.
Ethnicity
Avadian
Honorary & Occupational Titles
Captain of the Merid's Dream
Date of Birth
275 DoM
Circumstances of Death
Unknown - never returned from the Sapphire Sea
Birthplace
Pera, Isla Pera, Beyan Archipelago
Children
Gender
Female
Eyes
Hazel
Hair
Black, shoulder length, pinned back
Skin Tone/Pigmentation
Light olive
Height
5'6"
Weight
64 kgs
Belief/Deity
Avadian Gods

Answering: "An Explorer, Researcher or other character motivated by discovery."
Visit CorsairAquilus's Competition Page Check all other answers to this prompt Competition Homepage

Great job here too! She sounds like such a great person. I noticed this typo: "lost as seal Thus it was".   Other than that, I think it's a great article. I hope you liked writing it! Good catch! That article took *forever* to get right so I’m guessing proofreading efficiency took a hit.   Glad you enjoyed :)