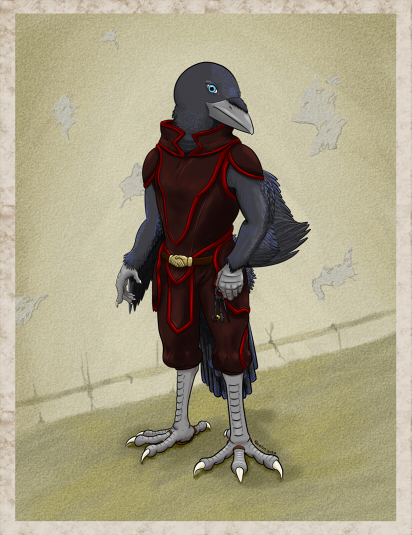 Florian Ley by Naelín
The mighty City of Endure prides itself on being the first to have a plumbing system, and the city's thieves pride themselves on being the first ones to find an alternative use for them.   Once the city's miscreants started one by one getting accustomed to using the city's sewers and waterways as they own underground network, they quickly had to figure out that they needed some sort of internal organisation if they wanted to prevent thief blood to spill into the citizen's water supply and get quickly cleaned off. The habitues of these underground roads started getting acquainted with each other, forming information networks and small groups, and soon enough they got their own symbols and codes and started getting know by the name of The Underfolk.   Once people started identifying the things that happened below the surface, the Underfolk became even more organized, using trap systems, secret passages and passwords to make sure that their coming and goings were hidden better.

The work that needs to be done

Send a message to ████, saying that I am aware of what happened. ████ is on the "roadblock refuge", I don't know where that is.
— Request from "A worried friend" to a Weaver, delegated to a renowned Underfolk

While the Underfolk puts their fair share of effort on preserving anonymity, they have also benefited by acquiring some recognition as an organized force. Criminals need to survive, and lots of people need to do things that are not exactly legal, but far tamer and safer than robbing or killing. Requests started to make their way to the sewers for transportation of unmarked packages, safe passage of unnamed people or contacting people that are not there to deliver letters.   At some point, it became a well-known secret that the Underfolk had become the cheap folkpower used by Weaver's Networtk to fulfill a lot of small contracts. Several people went from muggers to smugglers of love letters and sweets, which somehow made Endure City safer, while at the same time making being a criminal a more appealing option in life.

Don't talk about me, for I am not here

50
As a general rule, the members of the Underfolk do almost anything for money and do not make questions. As such, they are the perfect workforce for many of the small jobs that the Weavers Network need.

Remove these ads. Join the Worldbuilders Guild
Dhalmaín
In response to the prompt Describe a famous criminal organization and the unlawful acts they commit in your world.

Ah! Short but sweet. Clever of them to use the new plumbing system! :D

Thank you very much! Sometimes it's better to not add any extra padding where it isn't needed, hm?

Is it wrong of me to say that these guys sounds kind of cute? I like that it has somehow become a less violent place.

Lol, I sure wouldn't like to cross any of them in my path, but the Weavers seem to make everything a little less terrible in this world.