"It ate it! It ate the whole damn ship! As if the goddamn monster ate wood!" 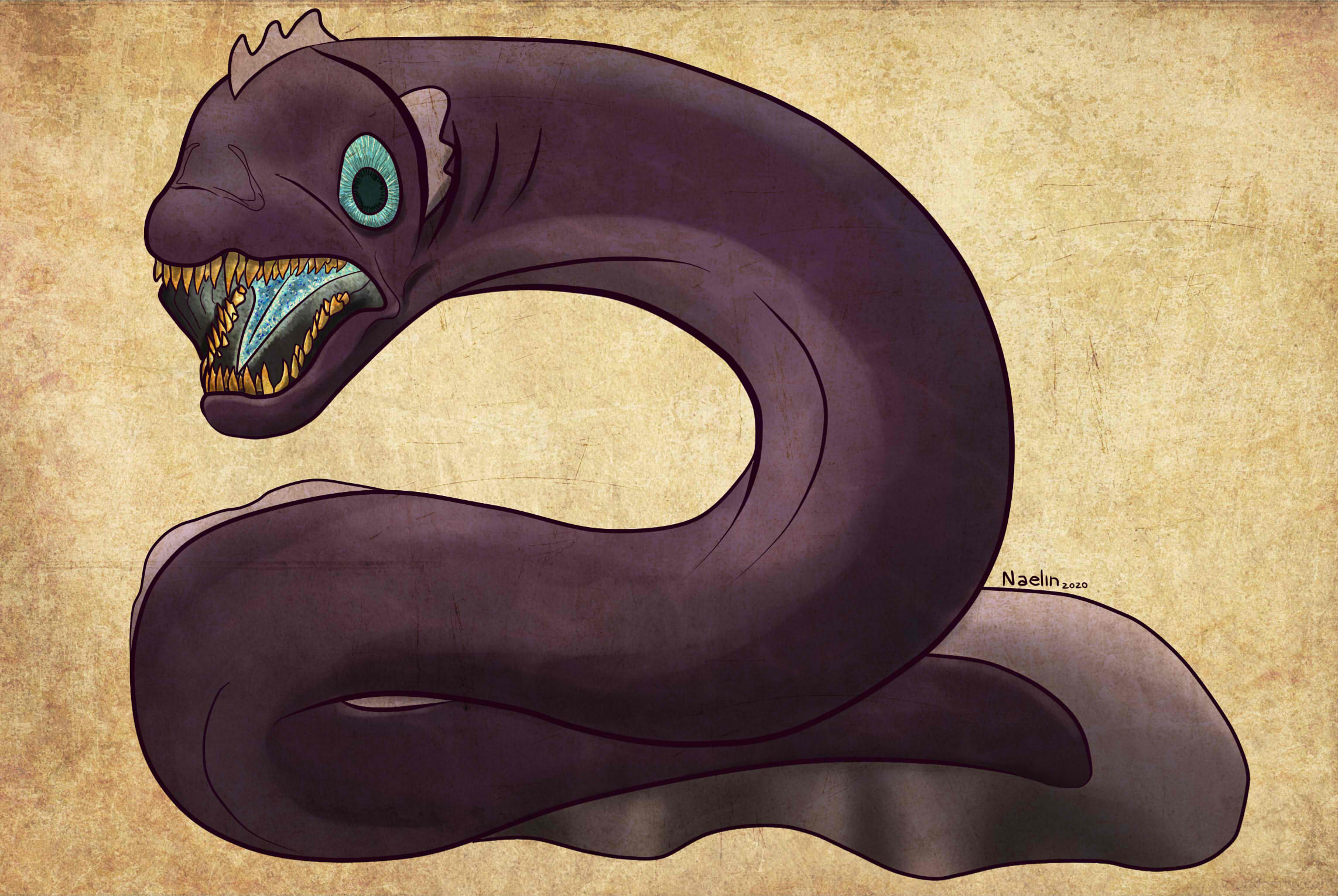 Dariga by Naelín
The nightmare of the archipelago's bravest sailors is a massive beast found in the deep waters of the ocean that can and will jump out of the waters to tear apart ships and eat the contents.   Darigas can reach more than 40 meters in length, are violent and unpredictable and do not care much about what exactly is that they are hunting.   People have tried without much success to hunt and kill these beasts. It is a delicate procedure, as the darigas' preferred way to hunt big floating objects is to hit them from below or jump on top of them.
However, a few have managed to lure darigas to the coasts, snare them in nets and harpoon them to death. A well-preserved skeleton of such a dariga hangs from the ceiling of a museum in the City of Dia.   A particularly brave hunter described their meat as tasting "like trash and poor choices".

Darigas' shape is that of an elongated tube without limbs, with a big fin sprouting from the top and bottom of the back half.   The head has a diameter similar to the body (when the mouth is closed) containing two massive eyes. Their mouth can open down to an angle of up to 80 degrees, and can also be widened to the sides thanks to their hinged mandibles. The lower jaw protrudes from the upper one. They have a presumably ornamental fin at the top of their head, and two small ones at the sides of it, partially covering their gills. They have two thin protruding nostrils at the front of their head.   The insides of their mouth are the most notorious part of their anatomy: They have several rows of orange-tinted, razor-sharp teeth that are continuously grown and shed, and a glimmering light blue tongue that can glow intensely when the dariga is hunting.
At the start of the throat, they have a set of proto-mandibles that they can extend to better grab at bigger prey and pull it inside to swallow them.

The dariga's skin has a uniform purple tint, which gets slightly lighter on the ventral side of their bodies, and darker on the dorsal side.
Their fins are a much lighter shade of purple, while their eyes are light blue like their tongue.

"If darigas are the biggest creature we know, what do they need such a big mouth for?"

Darigas are solitary beasts that hunt prey of any size by moving slowly with their mouths open, luring creatures inside with their glowing tongue. For much bigger or more intelligent prey, however, they launch themselves to the creature to bite them and bind them with their bodies.   This distinction, and the fact that darigas relentlessly hunt ships, makes some people argue that there must be something bigger than darigas, for them to have developed methods to hunt such titanic prey.

Societarians usually classify darigas as being simple, as they are too violent to dialogue with, live underwater, and have no limbs to communicate, so it is assumed that they don't have the basic capabilities required to dialogue with other species.
However, some unsettling situations sparked the theory that they might be actually pactual, and part of the extensive net of pacts maintained by the tetsus. 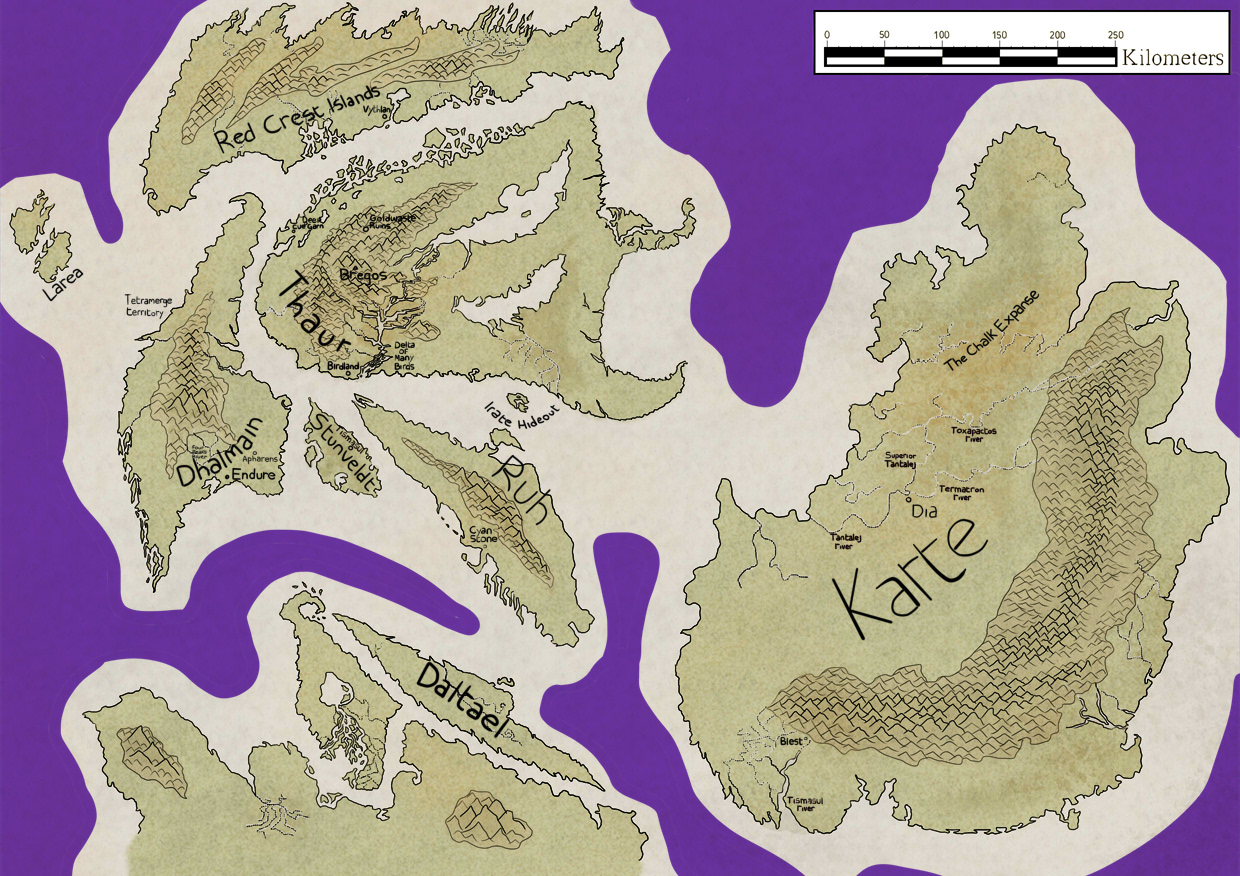 While most end up buried at the bottom of the sea, a few of the teeth that darigas shed wash ashore in the archipelago's coasts.
These teeth are highly coveted as they might reach even 30 centimeters long, though most of the ones that make their way to the coasts are much smaller.   Societarians fashion the teeth into all sorts of items, from scrimshaws to knife handles, jewelry and statuettes.
Some cultures grind the orange teeth into a fine dust that they say will grant the person "the vigour of titans".
Simple Species

This article was translated as part of Spooktober 2021's Prompt 6: "Glow"

Bummed because I can't like it again. I love the additions to it. Who should I ask for a carved tooth dagger? Are there artisans who specialize in crafting them?