A horrid rattling, like thunder, shook the heavens. As if an entire city's remains were jostling within the vast stomach of some great and terrible monster. For once, I would soon find myself thankful that I had long since lost my eyes.
— A blind survivor

Ytzkla, The Pale Lizard, The Great Lizard, Beast. No matter the name attributed to them, this colossal monster, which houses an entire city on its back, has consumed untold numbers of human souls. For centuries, the fanatic nation of Ytzklapon? has lended their aid to complete the beast's singlular goal— consuming all of humanity. 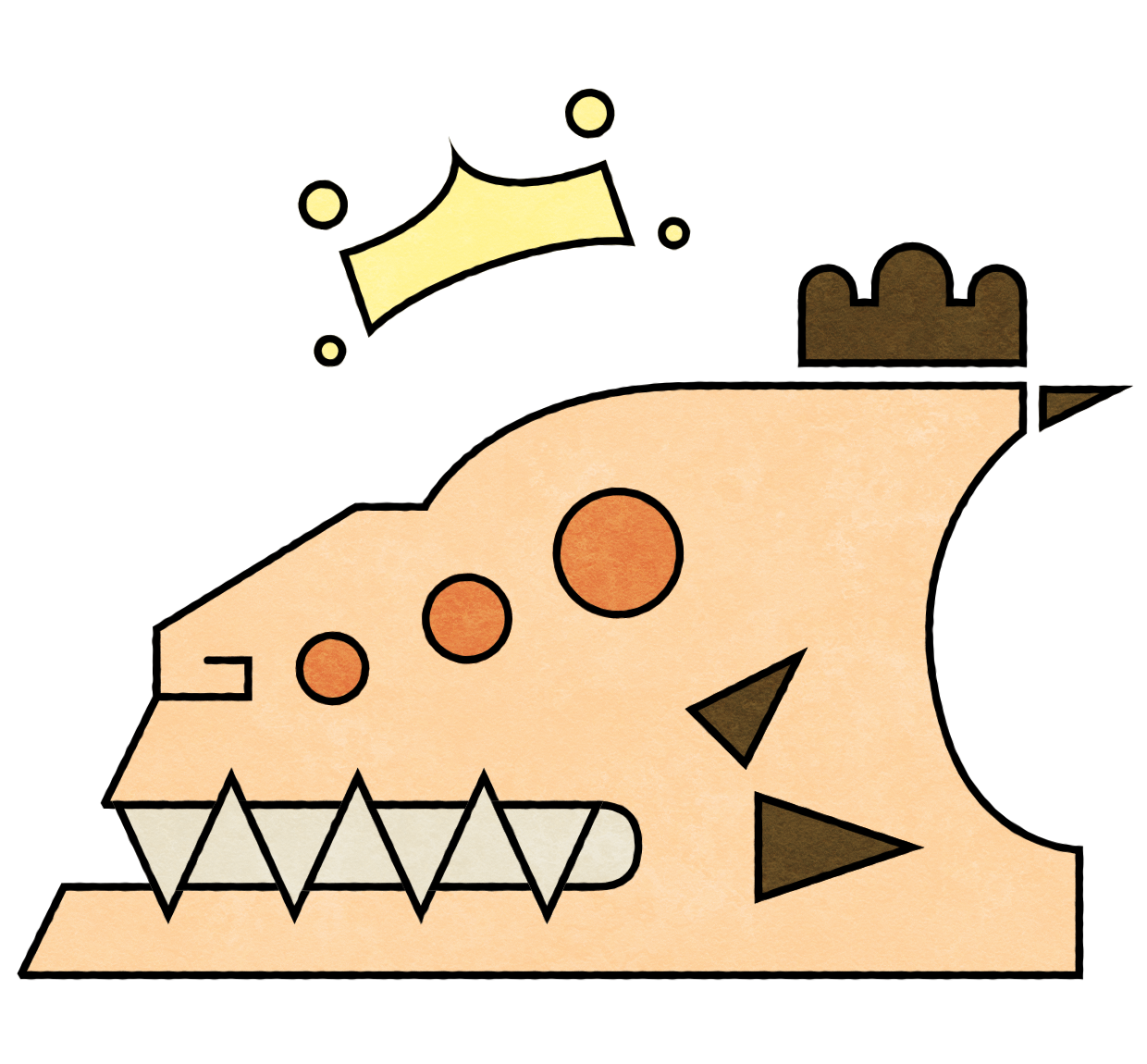 Ytzkla was born into this world as an unimpressive, below average monster— with an exceedingly above average hunger. An exceeding hunger so strong, in fact, that it lead them to devour their own parent immediately after being summoned into existence. As a result, Ytzkla gained their strength, power, and grew in size. Yet, Ytzkla still hungered. They began to wander, eating any small creatures that crossed their path, steadily growing in size and power— until they met Auroul. She was the first woman, a being from whom Ytzkla could smell a sweet, alluring scent emanating.   Ytzkla did not hesitate, quickly taking a bite out of the woman's leg. She kicked the creature away and ran off, terrified— as this was her first time experiencing pain. Ytzkla would never forget the taste, however, and had doubled in size from the meager amount of blood they had drawn. They had to have it all. Clearly, Ytzkla thought, this had to be their purpose.   The alluring scent permeated the air, and Ytzkla had no trouble tracking the woman— no matter how far she ran. And thus, the great chase began, a chase that would span across the whole of Qet. Tiring from her flight, Auroul eventually gave birth to the first of mankind, distilling her own power into them— and thus, her scent, knowing full well they could not outrun the growing lizard. This was her great distraction— the best defense she had against the hungering beast. Yet Ytzkla, their hunger never sated, kept chasing her— devouring every human they passed along the way, growing more powerful with each soul that disappeared into their gullet.   As people suffered in Ytzkla's maw, Auroul steadily gained distance from the pale lizard. Across continents they would chase— until, eventually, Ytzkla lost Auroul's scent. So they slumbered, waiting for her to show herself once again. Humanity flourished in this time, no longer prey to the great lizard. A city was eventually built over Ytzkla's hibernating body— a city that would eventually find itself embroiled in a bloody civil war. The blood spilt would permeate the soil beneath the city— which accumulated for untold centuries over the sleeping beast, who awoke upon smelling that sweet scent. A deal was struck to end the war, Ytzklapon was founded— and the grateful survivors set off in search of Auroul, now residing in the city upon the lizard's back.

Ytzkla's wide reptillian body is covered in pale-white scales. Their back tapers towards their neck, growing wider sharply towards their center, and tapering back towards their tail. Along their back sprouts great orange-black spines, growing taller and thicker towards the center of their back, and other branching ridges. Evenly spaced along each side of their torso are three sturdy legs. A long, flat tail is attached to their back and allows the denizens of the city to import and export armies and goods when lowered.   Their head is significantly wider than their body, tapering towards its snout to create an arrowhead-like profile, were one to see it from above— or most likely, below. Large, jagged teeth like that of a crocodile protrude around the edges of their great maw. On each side of their head are three pale-orange eyes— making it so that one can never tell where the beast is looking.   As Ytzkla consumes more settlements, the people upon their back build more from their ruins. As a result, the skyline of The City of Ytzklapon contains a jumbled mess of various architectural styles and materials. Between the lizard's spines, great ropes hang with many colored threads flying in the wind along their length.

Ytzkla is no ordinary monster— this is clear from their extradordinary size, which dwarfs all known monsters by an extreme margin. In truth, they are an aspect of Qetlon— and were formed from the dead god's mouth. As a result, they possess an unending hunger for the latent magical energies present in all of humanity— the largest deposit of which resides within Auroul.   With their great power, they possess exceptional manipulative abilities. Their maw appears to cut through earth and stone as if it were bread, the soldiers of Ytzklapon descend on ytzklaxoli culcatin?— which are aided by winds created by the beast, and their arms, the ytzklachli,? emanate a supernatural heat.   What's more, the pale lizard leaves behind no waste— as if they possess a stomach of infinite depth.

A colossal, powerful lizard, bent on consuming all of humanity. Upon their back, the nation of Ytzklapon worships and aids them in this pursuit.

A ceremony where the leader of Ytzklapon is chosen, and crowned, including the sacrifice of their loved ones.

The grand temple of Ytzklapon, carved from a spine upon Ytzkla's head, where their dead are sent off, and their leader communes with the great lizard.

Gliders upon which the soldiers of Ytzklapon ride to surround their enemies.

This is really a great story, I love how you've written that, this really read as a myth. The only question I had while reading was about the pact that is formed with the people leaving on the back of the lizard and what the lizard would even get out of it, but that is all answered in the YTZKLAPONEU article that I read just afterwards :D   Is there any people knowing about and possibly worshipping Auroul? She doesn't seem like a good mother, sacrificing her people like that. But then, if people worship the lizard...

Thank you! I really wanted a story that felt like a myth here, those sorts are always fun to write!

Is there any people knowing about and possibly worshipping Auroul?

BOY DO I HAVE AN ENTIRE SET OF ARTICLES FOR YOU. The Beuttep worship her as a god.
Check out my worlds: Qet | APRA: Anomalous Parks & Recreation Areas | Heliox Stardust | Umqwam | My website

I've read this article multiple times because the concept is just so awesome. It's a wonderful origin story for a horrible, terrifying beast.

This is a really great concept and well written. The myth flowed as if it were truth. Amazing work!

Thank you! I'm pretty happy with their history!