The Bwahìs were wooden huts and were only found in the Wild Marshes within the area around Qal'ath. Unique to the Wild Folk, each bwahìs stood on a platform, supported by a minimum of four strong wooden poles that raised the home over the water level of the marshland, digging at least an adult's height into sludgy ground.

Origin of the Name

While the Wild Folk are fluent in Foyiitùn, they have retained some archaic forms of words. This is similar to the Woodsmen Chief Ki-E-Vwa.   In "pure" Foyiitùn, bwahìs would be translated as bruhny or bruhnysz.

Types and Styles of Bwahìs

While many homes' designs were dictated purely on the amount of materials available to build it, there was still a variety in layouts. Some were square, others perfectly round and some could not easily be described as any one family's bwahìs could change shape and grow as their family did. As the Wild Folk put people first above all else, if a home needed building, or to be expanded, then Marsh Folk would band together to see the work done. The Wild Marshes is not a safe place to live, work or raise a family, so the importance of home cannot be understated.

The chief's hut was almost always the largest at Khef'em Nysz. However, if a family elsewhere required the space, then tradition (and their attitude towards others) dictated that the chief could live anywhere, but all their people needed shelter.

Did Bwahìs Have an Upstairs?

Very rarely, if for no other reason than the precarious nature of balancing the hìs on poles. That's not to say "upper levels" never existed. As the roof of a hìs was usually pointed, rafters or beams would often be used to support it. This became a place to store wood supplies, or even other belongings that were only required infrequently.   These beams would not form a solid ceiling, however, since cooking was done over fire, meaning the smoke and any excess heat (especially in Summer) would need to escape through the roof.

Bwahìs (which was used both for the singular and plural forms) were organised into villages called Nyszii - e.g. Khef'em Nysz. Although each Nysz had its own name, the Wild Folk were one people - the villages simply grew outwards from individual homes.   When a Nysz looked like it may soon join another, a new village was created. This was not to further fragment their society but as a simple fire precaution. It was far easier to evacuate one small village than risk two or more burning.

In Foyiitùn, nysz does indeed mean "home". The fact that the Wild Folk called their villages Nyszii was an indication that a village was as much home as the hut one lived in.

Individual homes were connected by wooden walkways, each with their own small jetty. Locals would travel between villages either by shallowboats (very similar to Slùpe) or Raft Ferry-style craft. Where the water was too shallow for even these methods then S'wal'kà lizards carried them. 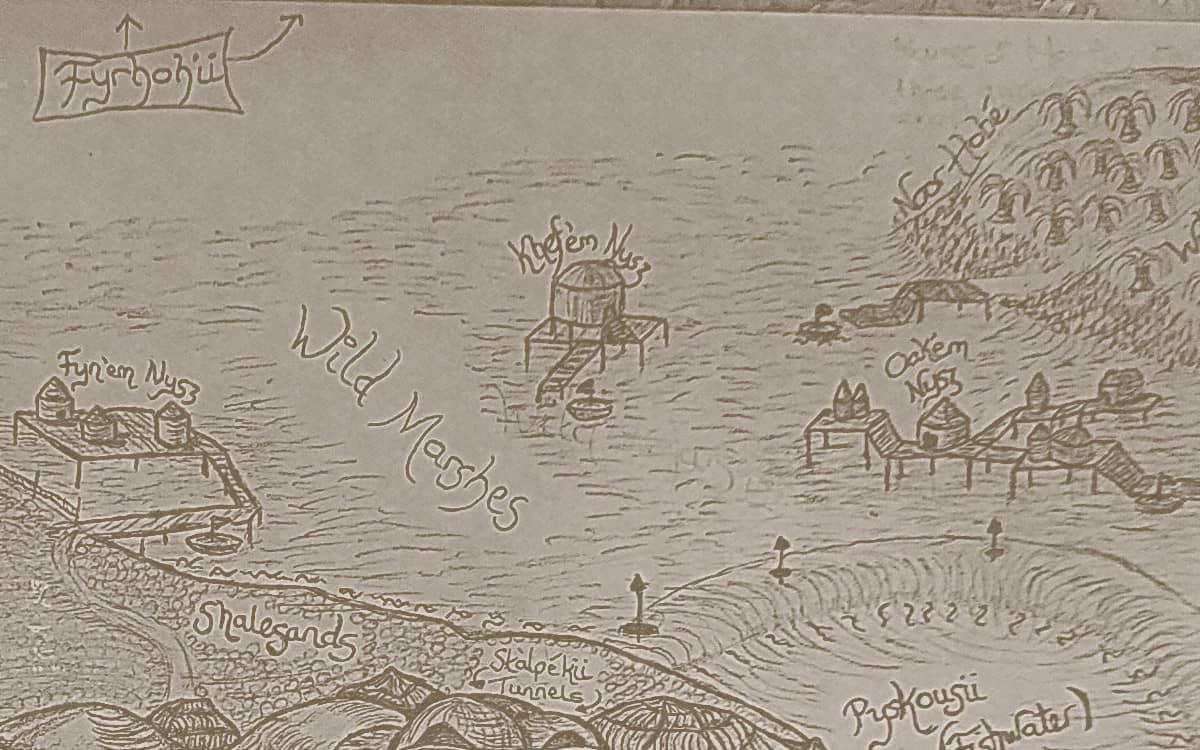 Sections If you're on a larger screen, this menu may be collapsed. Simple hover your cursor over it to unfurl the menu. Related People & Places
Alternative Names
Bruhny, Bruhnysz
Type
Hut
Parent Location
Wild Marshes