The Téperskà or "S'wal'kà" is a large lizard found in the Wild Marshes. With a height of twice times an adult of the Wild Folk, a fully grown S'wal'kà could carry a family of four above the marshwaters with ease. The one depicted in this article is about three years of age, so could accommodate two humanoid adults or one adult with two children.   The lizard, part of the Skàlkyn or Kyskàl (no link with Kyadii linguistically) group of animals, had evolved to have four legs of equal size and strength. These were long, with claws at the end for finding grip in the sludge found at the bed of the Wild Marshes. It only ever walked on all fours.

How Did the Name "S'wal'kà" Come About?

The term became an "adopted" local name for the creature. It is derived from the phrase Tail Swalker that was coined by one of the children when the creatures were first found to be amiable enough to carry non-threatening sentients. "Tails Walker" would have been more accurate, as the lizard had two tails, that it used for balance, holding foliage for eating, or catching birds. But, as young children are known for doing, the words "Tails Walker" became "Tail Swalker" or often just "Swalker". For the last generation or two, this has been adjusted to S'wal'kà for pronunciation reasons.

As the creature's name was derived from Common Tongue/Parànti, it was often pronounced sworka by people not from the Wild Marshes. This gave them the false impression that it may have been able to walk on its hind legs. So it was that two chiefs before Pyotr declared it should be called S'wal'kà ([s:wæl:kæ]). This fit better with the accent of the Wild Folk, while still honouring the children from generations past that named them.

These unusually-large lizards were generally docile, with the exception of mothers (or fathers, for that matter) guarding their eggs or young. While many roamed wild, some were tamed enough to allow humanoids to ride them. Their striking brown stripes meet into spikes down the spine, so special saddles were crafted by the Wild Folk that ensured people (especially children) were sat in a place that would not cause undue discomfort or pain - either to the rider or S'wal'kà.

With the Wild Folk honouring nature and the Elements almost as much as the Woodsmen, they did not believe creatures should be permanently subserviant to them. Thus, once "tamed" - or "trained", more accurately - a S'wal'kà would remain free except when required. A nesting pair were never separated except in a dire emergency. So, these Lizards were both tame and free.   And, of course, not all of them were tamed - only the bare minimum were trained as the Wild Folk were adept at traversing the Marshes unaided. It was only if they needed to move a group of warriors at speed - or relocate vulnerable tribes-people. In all things, they tried to live with Nature, rather than dominating and abusing it.

Their long tails were used to pull up plants for food, or if pushed for self-defence; being well-built, the tails could easily knock a warrior down or a predator of similar or smaller size. The S'wal'kà was a herbivore most of the time, but if its favoured grasses and reeds had not grown well in any given year, it could feed on crickets, insects or extremely small birds. Though the sudden survival-induced change of diet usually led to days near the family's nest due to, according to the locals, of stomach problems.

As food was delivered from tail to mouth, the claws were almost never used for anything other than providing adequate grip on the bottom of the Wild Marshes. These were equally useful on rocky ground and slight inclines, affording a grip to keep even the heaviest charge safe.

The S'wal'kà featured a single, but very sharp horn just above its nose. This it would use in self defence, or for moving various plantlife around while looking for its favoured food. 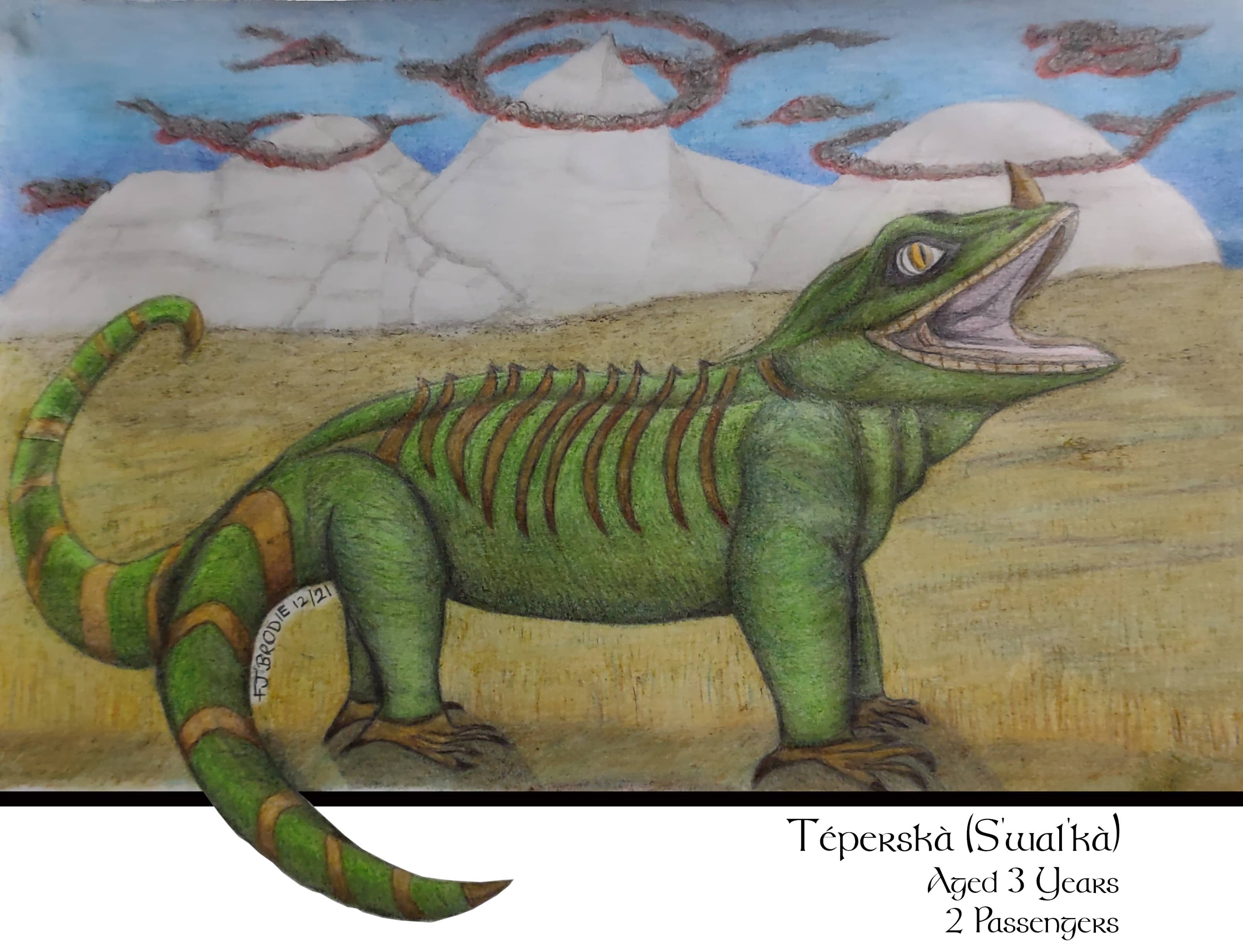