"Sila ulu elghinn ukt dro. Jous ukta nindel nindol zhah naut lil' xuz de' draevalen. Jous ukta nindel uk zhah yutsu ulu lil' har'dro dal vel'bolen uk zhahus rosin"
- Last rites of the Iscoanian Dwarves
Rough translation: "Bring to death his life. Show him that this is not the end of times. Show him that he returns to the earth from which he was born."

Even the hardiest of foes and the most selfish of people have a funeral, and those who spend their time in the darkness find that light and earth are what they wish to return to.


When an Iscoanian Dwarf dies, they are not placed into a pit and buried. Nor even laid to rest with the treasures that they created and accumulated over their lives. They are placed on an iron bier, under which a pyre is constructed.   Only those that wish to attend will come. Generally, however, direct relations will participate if only to watch their bloodline burn.   After the pyre is lit and the flames start to eat at the body, the last rites are spoken by the Priests of the Iscoanian Dwarves. These rites ensure that the soul of the deceased travels into the earth to return again.   In the rare circumstance that many deaths occur in a short time period, the bodies will be burned in manageable amounts. Though the process is largely unchanged for those situations.

The Earth in Sight


After the burning of the deceased, the ashes of the wood and the body are gathered in a small metal box and put into a vat. The vat is then filled with molten iron, melting the box and infusing both ashes and metal as one.   The metal from that vat is then left to cool and is then melted down once more, to become components of machines needed by the Dwarves.   After this process, the Dwarves do not feast, they do not mourn, they simply soldier on in the face of losing one of their own. Their community is not shaken; no bonds are broken.   Possessions of the deceased are handed out to other clan members, based solely on the premise of one possession claimed per person and no actual value. This is the only time where the Iscoanian Dwarves don't place value on their belongings, and instead claim an item based on their time of arrival at the deceased's home 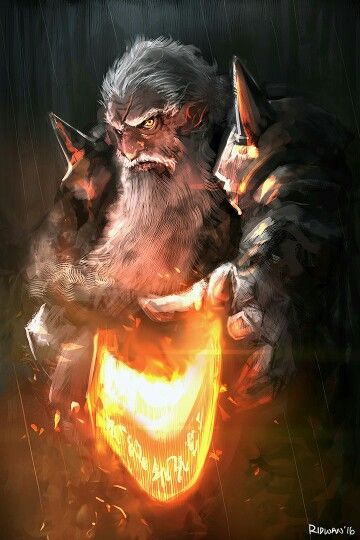 I have arrived, as foretold by ancient prophecies. Or Discord.   The quote, while neat, doesn't really do much for the article without a translation.   It'd probably be better to lead with what the rite is rather then what it isn't, but that may simply be a stylistic choice.   How is the order of who gets to pick possession determined? Seniority in clan? Family, then that?   A picture or two would probably help the piece. Nice, mood-setting pyre in the middle.   What happens when they are unable to go through with the entire procedure? What do they think happens? Angry dwarf-ghosts?   What do they do in cases where they are unable to light a fire (like, stuck deep underground and Barry bites the dust) or in cases of lots of deaths all at once, like war or plague?   Well, these are some questions that came up off the top of my head! Hopefully, they'll lead to something useful.

Alrighty. Time to get down to business.   The lack of a translation is intentional, though I have toyed with adding it.   Order of gaining the possessions is basically first come first served, they don't really care about that as much as just redistributing to get the items to others in the clan.   I'm working on finding pictures for it.   If they're unable to go through with the entire procedure, for whatever reason, they basically shelve it until the problem gets fixed. The Dark Silent One really doesn't care too much about their dead so it's a non-issue with that.   Dead are dealt with when they're able to be dealt with, not immediately when someone dies. In the case of masses of deceased, they do 'em in batches. Efficiency!   Aaand that's it!

I'd suggest fleshing out those details and adding them to the article :)

How fun. That particular quality to their cremation is quite enjoyable. There's some subtle implications made about the culture and its beliefs strictly based on the dead very literally becoming part of the industrial machine of the nation.   And now I'm giving myself mental images of a worker quietly talking to a particular tool or component that had their grandfather in it, either asking for guidance to aid their work or just asking them to stop stalling out the gearbox because they're upset they didn't get made into a steam press instead.

That would be a fantastic way to have that present, however, it's unfortunately not the case with these. The Dwarves of Iscoania are very much just making things for the selfish wanting of more treasure and creations, not any sort of sentimentality.

It feels almost like an industrialist version of naturalist fey rites, focusing on the body returning to the earth as nourishment for the world, though in your case it turns into material for the clan. Very well written and on the point; an enjoyable read, Theiket!   I'd describe a service in the side bar, just to fill it up and provide some more immersion. You could describe from the view of a close family member how one of the dead is placed onto the bier and the fire lit, contemplating how the body will become part of the world that surrounds them, perhaps even contemplating, how they are literally standing on the backs of their ancestors.   Oh, and thanks for teaching me the word bier, the learning never ends ^-^

I would but the Dwarves of Iscoania really don't care for each other that much besides being part of a clan. Their marriages are only to ensure a continuing clan, not for love. Should read the article on them :D

Well lean into it then, still do a description of a funeral by a close family member but put an emphasis on them losing valuable work time over it and hoping it'll be over soon so they can get back to living their lives. Either way, really brandish the mentality for your reader ^-^

I like how they add the ashes into metal, that too me seems something a dwarf would do. I like it.

Glad you enjoyed it.