The records of the keepers show nothing about the creation of the Raitin Citadel nor did any of our agents get a glimpse of its construction. A construct of that size should have taken at least a century to build. But still we were taken by surprise when it suddenly appeared in the Crystal Valley. Most of all since it marked the start of their rapid rise in technological advancement.
— High Sage Syronikir

The Raitin Citadel is a city in the Crystal Valley and is the current capital of the Raitin. The most peculiar thing about this city is that it is actually floating pretty high in the air.   This flying city is kept in the air by the technological prowess of the Raitin. Many don't know where the power for such a device originates from but some know that Raitin Dragons are used.
The Crystal Valley
Open full size

The city is controlled by the Raitin.

How the city was actually created remains a big mystery. Until a century ago nobody had even heard of it or that it was being constructed. But seemingly out of nowhere it became the capital of the Raitin.   People have made wild claims over the years but the most prevalent one is that perhaps the Raitin just found the basis for the city and got it floating again. According to them the most likely place that they found it is at the bottom of the nearby cloud crater. Nobody knows for certain and many Raitin don't know it themselves or are not telling what they know.   As to why the Raitin used an artifcial floating city as their capital instead of one of the islands floating around in the region is a heavily debated topic. Some say the Raitin only developed airships after creating the city which would mean that the other islands would not have been accessible at the time. This would mean that the city would have remained on the ground at the start.
The Crystal Valley
Open full size 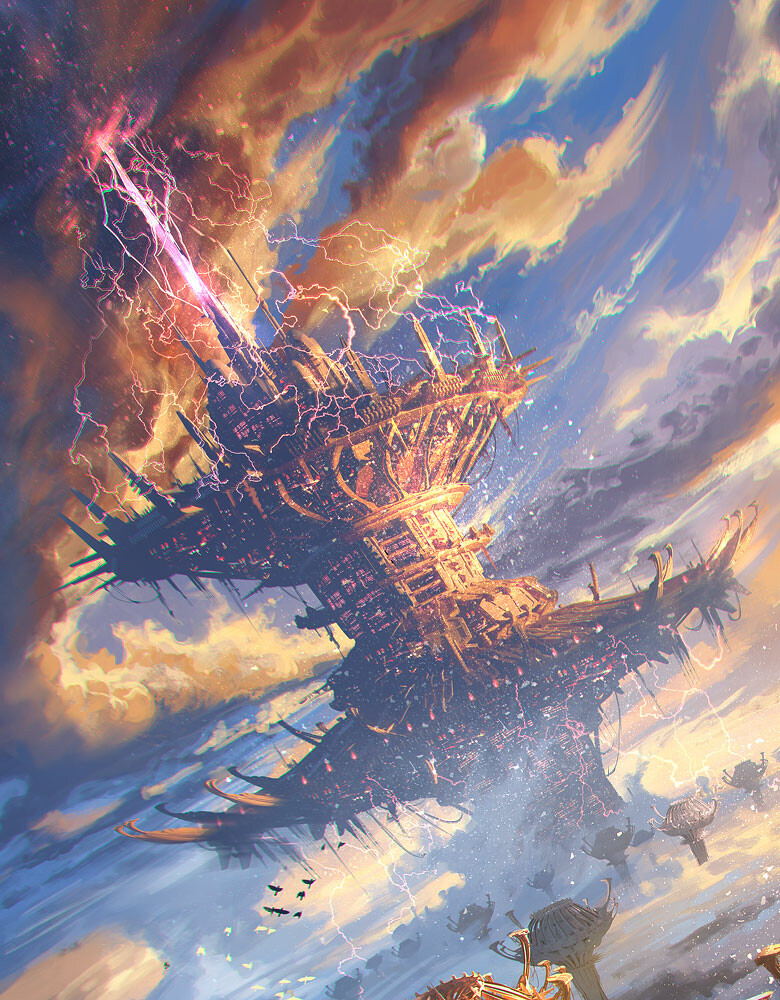 When one approaches the Raitin Citadel they can quickly see that it is truly a marvel of technology. At the bottom is a large artificial metal base which keeps the upper city in the air. This base has not been changed over the years on the outside since the city was founded. There are districts within it which could have been changed over time but since no outsiders are allowed there it is not known what exactly could have been changed.   The area of the Citadel that sees the most change would be the upper city where a large number of districts can be found. Some of these buidlings are in the more general Oneragan building style but others are entirely made out of metal and have architecture not seen elsewhere.

Currently the Citadel is the capital of Raitinshin and forms the base of their empire. This is of in large part due to the easy accessible docking facilities for their airships and the great defense capabilities of the city.   Even though the city can actually move around it stays around the cloud crater most of the time. During the Pavan-Raitin War however the city was moved closer to the front to aid the Raitin supply chain.

The Lower City is a district of the citadel which forms the basis for the rest above it. In contrast to the higher parts the lower city only has a small amount of resident buildings. The majority of the area is used for maintance, generators and military purposes. Off all the districts of the city this one is perhaps the most well defended given its importance at keeping the rest of the city in the air.


The propellers and engines

The city is kept in the air thanks to a large set of propellers and engines near the lower end of the Citadel. These are not all concentrated in one place but can rather be found along the entire bottom of the base.   The propellers are comparable to the ones used in Raitin airships although off a lot larger scale. These seem to have a slightly different look in used materials in comparison to the rest of the city. The engines on the other hand blend well with the exterior and generate a constant upward motion. It is not known why the design of the engines of the Citadel are not used in the Raitin airships.

To make the Raitin capital remain airborne a gigantic power source is needed. Deep within the Lower City itself is a large room filled with a machine used to create this power and transport it throughout the entire facility. It is unknown to outsiders how this machine actually operates but it certainly filled with a large collection of Cloudcrystals.   From trustworthy sources some have found out that large captured Dragons are used to provide power to the cloudcrystals. How many are trapped there exactly remains a mystery but is believed to be at least more than two with some being used as a 'reserve'. Those that know about it also wonder what the Raitin will do if they would die shortly after each other since the Raitin don't likely have a lot of older Dragons to their disposal. 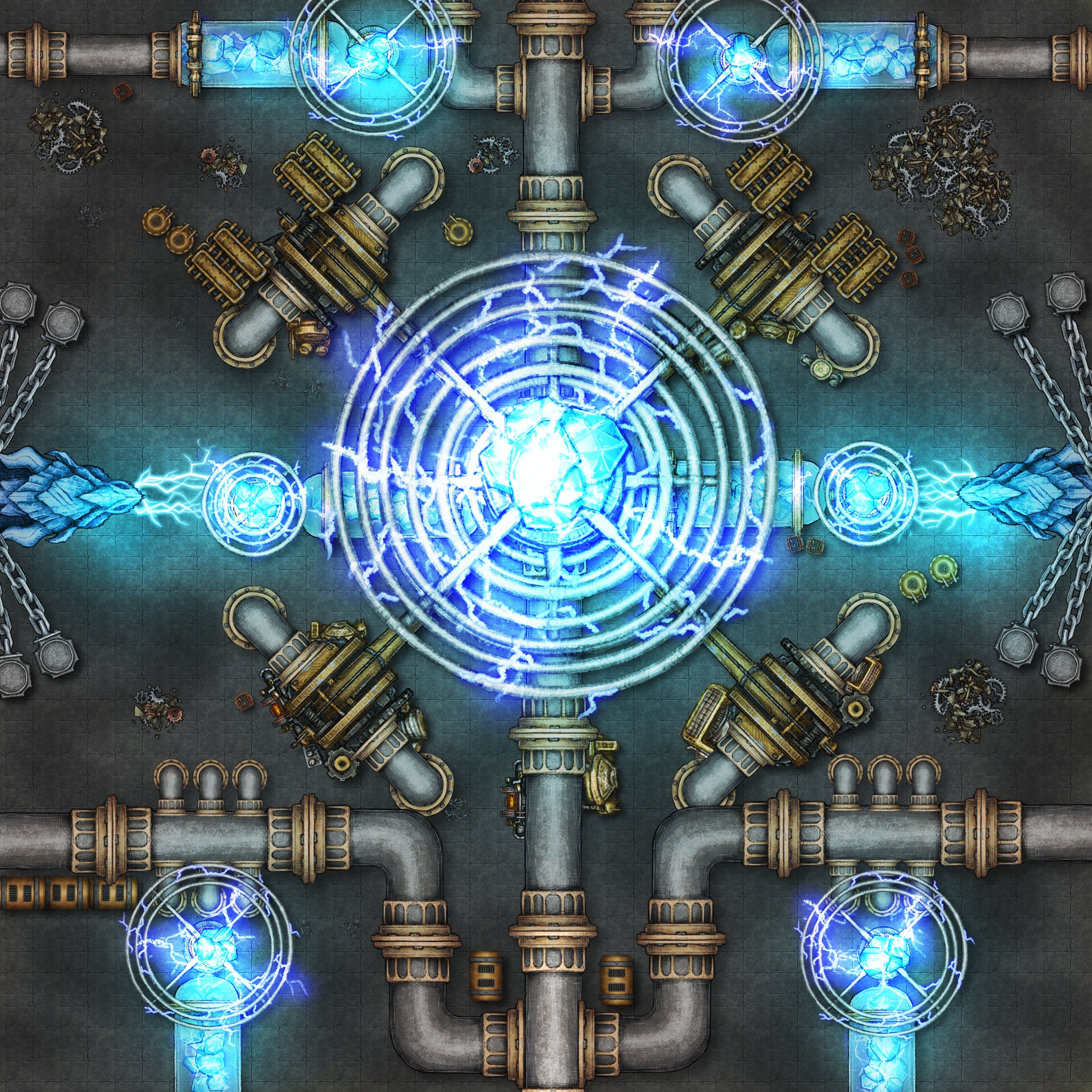 Since this district keeps the Citadel airborne, several military bases can be found. These are often equipped with extensive armories and sometimes with their own weapon foundries. Originally the Raitin mainly used swords that were upgraded with cloudcrystal infusions. But after the Pavan-Raitin war the lightning rifles became more common.   Near the exterior of the Lower City there are regular outposts that all have several arcane cannons. Due to this defense it would be foolish to approach the city with only an landlocked army.

Closer to the top of the Citadel is a district that also has less exterior changes but is still considered its own district thanks to the large amount of Raitin living there. In general the people living here are poorer than the ones in the Upper City but the merchants living in this district do have some expensive residences in that area.   The district is the main place for airships to dock and many other buildings related to trade can be found here for that reason.

Along the exterior of the Middle District it would be hard to miss the amount of docks. In general airships tend to dock at one of the docks that is closest to their intended destination. Since the city can turn around symbols have been placed on the exterior to make it clear which dock is in front of the airship.

The crystal dock is used mainly for the import and export of raw materials and especially for importing Falls. For this reason the majority of the industries using them are located nearby. Among are for example the armories and magical institutions.

The ship dock is home to the wharfs where new airships are created and is also the place where captains can go to repair any damage to their airships. Because many types of vessels are created here, among which also military vessels, there is a large military presence nearby.

The beer dock is meant for airships who are just visiting or want to let their vessels stay docked for some time. The majority of the taverns and inns are located here as well as some cultural establishments.

Finally there is the hammer dock where airships looking to trade manufactured goods are more likely to dock. This used to be the main location for manufacturers and shops to have their own establishments but in the recent years a shift to factories has been made.

In recent decades the Raitin have started to put more thought into developing their technological knowhow. This mainly started after their conquest of the innovative Tenari whose cultural clockworks they converted in military uses. Many of the Tenari were brought to the Citadel where they work at creating new innovations.   Among the breakthroughs that came from here are the advanced war golems which were created near the end of the Pavan-Raitin war. But what really allowed the Raitin to set themselves apart was the introduction of elemental armors not too different from the crystal casting armors of Aelerium. This allowed the Raitin to reinvent their military since it allowed non-casters to use limited magic. This in turn was used to power the electric rifles that are currently used by the military.

At the very top of the Citadel the Upper City can be found. This is the area where most public buildings are located and also where the richer population of the Raitin lives. The governmental buildings where the Raitin council decides the fate of the nation are also located here. Since so many important buildings are centered together here, the area is also defended by several large cannons, mainly used to kill Dragons.

This large building is where the government of the Raitin resides. Each of the richest and most powerful families of the nation provide members who make up the true council. Any meetings of the council take place in the palace which has a large hall where 600 people can be accommodated at once.   The building is well decorated with luxurious materials and in some place even Falls are used. A luxury that almost no other nation in Niorath could afford.

As a floating city, it can take up alot of three dimensional space. Naturally, they end up resembling a tower but I imaged it being shaped like a soda bottle.

Yes it is more of a larger base with the rest resting on top of it. But it is unknown as to why they actually did it that way instead of a tower :)

You've put so much thought into the structure of the city - I love that the tavern area is called the Beer Dock. I really like the air of mystery behind where the city comes from.

Yeah I don't want to reveal everything yet :p Nice that you liked the names for the docks, was not certain about doing that first xp

Nice article. However, I would like to know more about the Raitin themselves

Thanks! And no worries that is indeed an article that will still come this worldember I hope :D

What an amazing level of detail and thought you have put into this article! It was truly lovely to read. I like how you've made all the docks have a specific purpose. Still, I'm curious about the origin of the city and how it even got there in the first place. I suppose we can only find out later. ^^   Keep up the good work! :D

Thank you so much for the kind words! ^^ Yes for now still a secret but eventually it will become clear :p