What is giving life, is the river that has life, and the people that cherish life will forever be thankful.

Vieavon, or Grensriver (/Grensrɪveər/) in Orfordwhelm, is one of the two inflows to Lake Merluni. The river is famed for being the longest and a key part of trade during the long bygone age of Telamirein. In the present, due to the Forest of Telamirein, it is dangerous to navigate the river due to the wildlife and other forces said to find themselves in and on the river. Several ruins of lost settlements can be found close by, one of the most famous being Critmar for its ruins and ruined towers that are located next to the river.

East of the Forest of Telamirein is where the river is called Grensriver by Orfordwhelm and the Orfordsmen. It has long represented the original border between the homelands of the Orfordsmen and the rest of their country. It also contributed to the trade of stone, minerals and metals to the late major power of Kingdom of Kyrkas together with its tributary Kyrriv.
The Orfordsmen have had little interest in the river in any cultural meaning beyond it symbolising the border between them and others in the south. Since Orfordwhelm became the major power in the east it has served some trade purposes to the west for the daring and the desperate wanting to flee from Orfordwhelm's rule.

West of the Forest of Telamirein the river has been a vital part of internal trade and moving lumber from the forest for Nilaminra. Locals also call the river "The Lifegiver" for its importance and relation to Merluni, the local Goddess and lake Merluni. External trade seldom flows from the forest except for the bravest traders that are able to transport marble and other fine stone from the east and Orfordwhelm. These traders have built large, covered boats that do not stop anywhere for the night, having crews of close to a hundred men to sail past the forest as quickly as possible and any haunting ruins.

The river flows with great thunder during rainy seasons. This creates an even more eerie feeling from the forest as if it can roar like an animal and claim the brave souls that have tried to survive inside. What The Lifegiver can't give is complete safety inside the Great Forest, unfortunately.
— Everam, Teller of Nimenra

Most of the riverway is located inside the great forest spanning Telamirein's centre. The river meanders its way through where once small settlements stood with ruins now covered in great leaves and greens ever since they have been abandoned or lost to the elements that have claimed them. A few settlements have survived and survived because the river gave them the necessary defences against the forest. Perhaps these can consider themselves lucky to have survived or be thankful to Askersound that He has protected their settlements against nature?

The river contains plenty of life from its banks to the bottom of its sandy floor. Fish travel both up and down the river and its tributaries without any problem and live on the greens and smaller lifeforms. Clams can be found on the Nilaminran side of the river, being a flourishing trade prospect for many in both dyes, peals and food. They are not as common further east, where instead clay deposits from the mountains form aplenty. 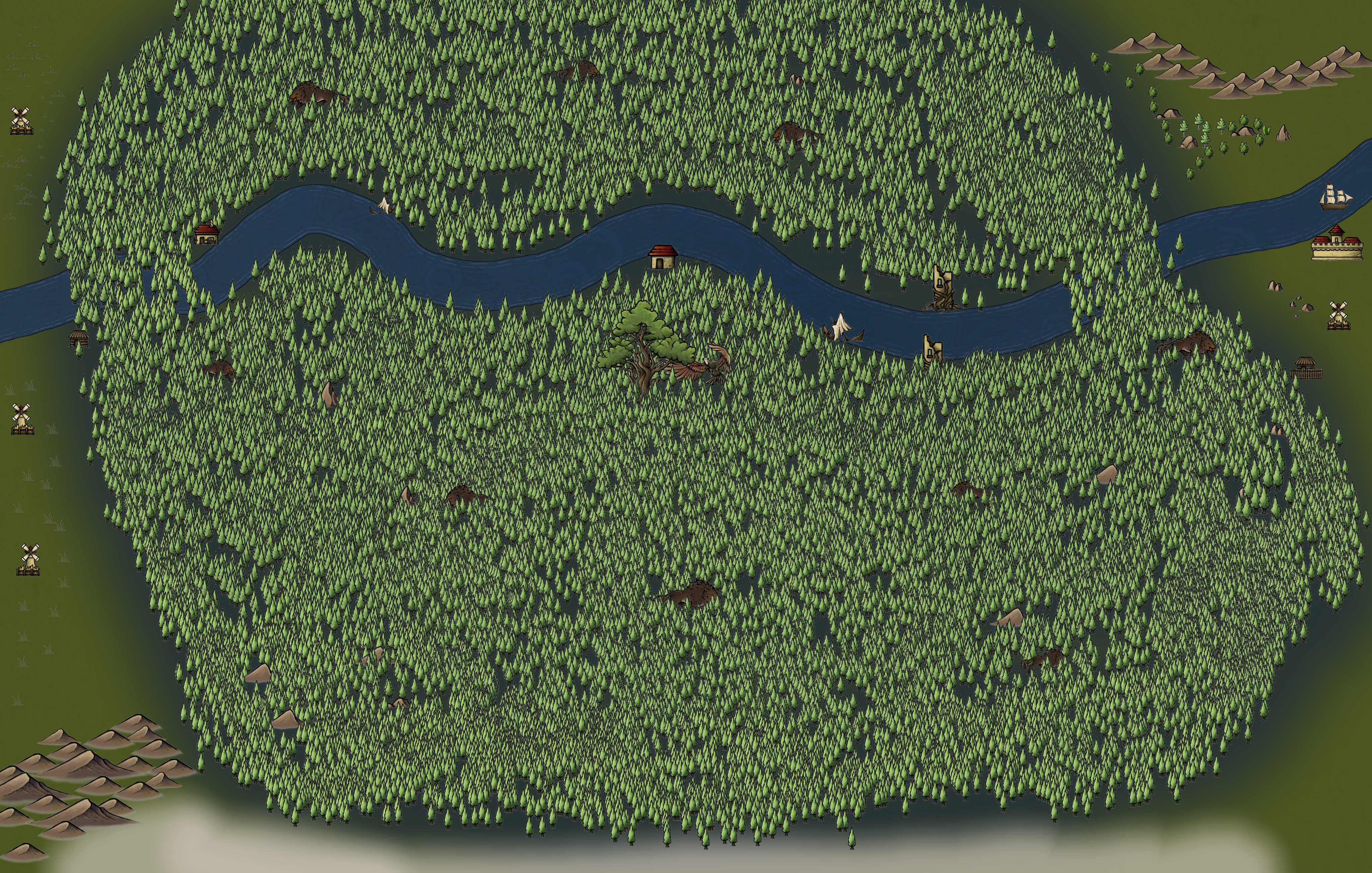 Finding Eoemun the Explorer — There goes around a rumour about an explorer called Eoemun Foothill from Orfordwhelm. He is known in his home country for finding several tombs in the Orfordian hillsides belonging to famed warriors and he has now let the prestige get the better of him. He set out two weeks ago into the forest along Vieavon to explore Gazomur, having last been spotted in the Nilaminran capital of Astria going north to the river. An associate of his, Andern, wants someone to go find him and bring him back before the fool of an explorer goes and gets himself killed either on the river or in the forest.

Clambering Clay — Some brave traders need protection and help when travelling Vieavon because of a recent epidemic taking several of a ship's crew to the grave. They are taking clams to Orfordwhelm in an attempt to interest nobles in the food and pearl that they offer. Tasks onboard range from making sure no stowaways have come onboard to repairs and defence from anything that lurks in the forest.

Many ruins of attempts to settle close by the river remain a reminder of the untamed forest that has claimed a large part of Telamirein's centre. Settlements from ages past can be found standing covered by grass and wood just by the riverbanks. Among the most famous are The Rivér Towers, Gazomur and Askers.
The Rivér Towers are said to be the only remaining pieces of a larger settlement and are located closer to the eastern part of the forest. The towers stand lonely on each side of the river, the one on the southern bank tilting slightly towards the river with all of its windows blocked by old wooden planks from the inside.
Gazomur is located in the western part and was a attempt by the 19:th Nini to create a settlement inside the forest. It lasted a decade before the rumours of monsters in the forest scared new inhabitants away and the leader in charge relocated everyone back. The old name is forgotten and is now called Gazomur for its grass-covered fortifications.
Askers is also called the hunted village. With its unknown creation, many daring merchants try to hurry past it as mysterious floating lights and the feeling of being watched is constantly there. The ruins of this location have remained mostly untouched due to this and the fact that rumours about actual inhabitants even scare the bravest of explorers away.

Thank you! I will probably add more later about it since it is such a major river on that landmass.

I love the different views of this river depending on which side you're at! I hope there might be a map later on, as it's a little difficult to picture the area, that might be a personal issue I don't picture things in my head very well. It definitely doesn't take away from the article as a whole.

Yes, I wish I could make a map so everyone can see it. But my mapmaking abilities are to say... lacking. I will look into it but can't promise anything significant looking as yours.

This sounds like a very interesting place to explore with all those ruins being there. Dangerous most likely but interesting :p Some great plot hooks as well!

Thank you for the comment!   Yes, it is a dangerous river for only the bravest adventurers and explorers. At least for now, who knows what will happen in the future.