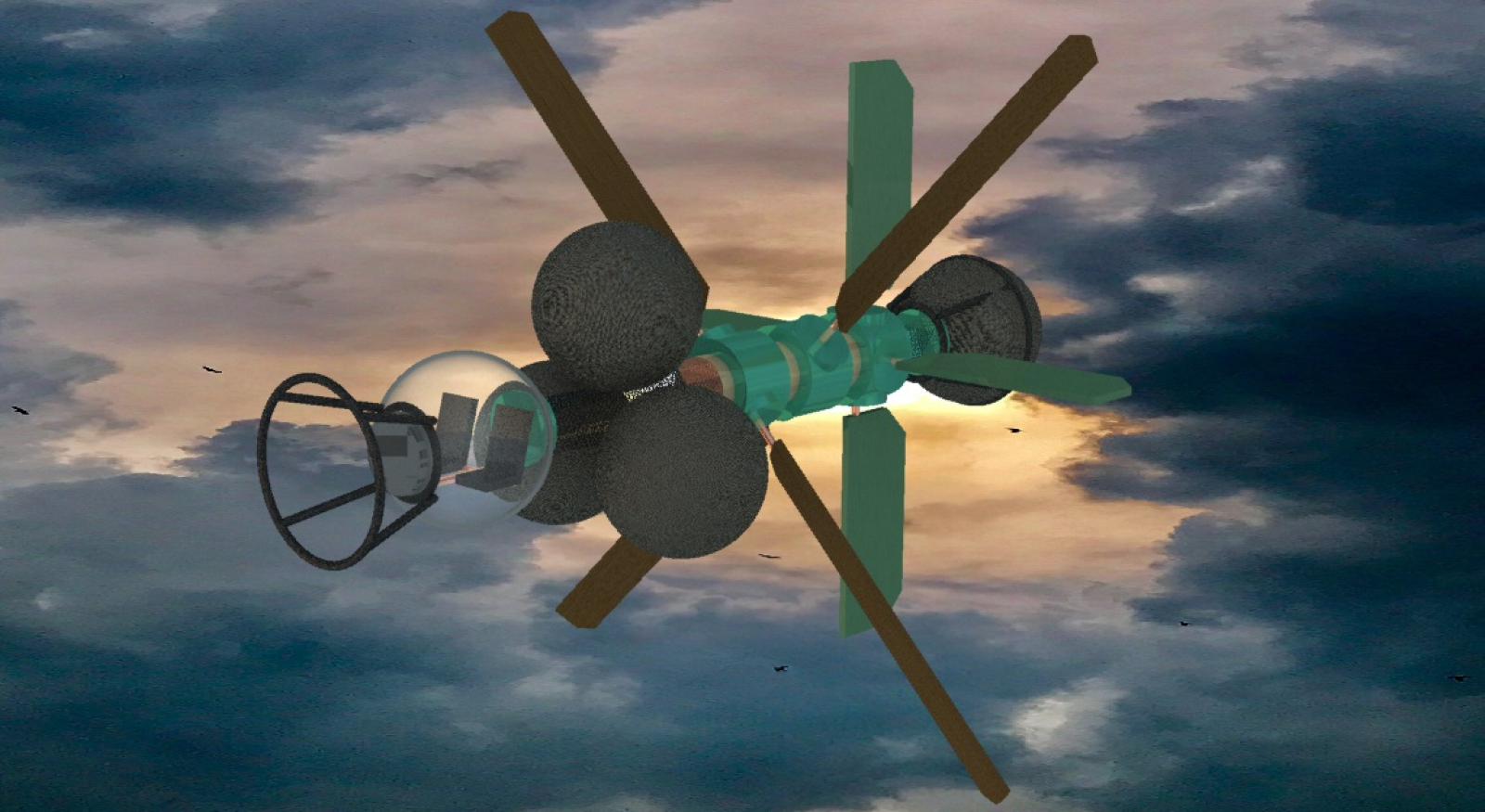 A skymoth is a modular ultralight aircraft designed to be operated exclusively within an inflection layer, possessing the ability to maneuver within the inflection layer and descend safely to a cube layer below if necessary but unable to return under its own power. Particularly large skymoths blur the line between airships and skystations, usually fulfilling scientific or logistical roles.

A skymoth is built entirely around a central truss. Weight savings are paramount in skymoth design, with tensegrity trusses, inflatable portions, and hollow (or even skeletal) fuselages being the norm. The components of a skymoth are as follows:

While many large skymoths are powered by dieseltech power plants or even purpose built "Calliope" Micro-Gravity Maneuver Packs, one- or two-person skymoths can be propelled by differential-mounted foot pedals in the crew cabin. This, along with extremely light structural elements, makes skymoths remarkably frugal in comparison to full-sized airships with regard to biodiesel resources.   A skymoth is usually just slightly more buoyant than not, allowing it to loiter in its inflection layer almost indefinitely. A skymoth is capable of safely descending from an inflection layer because the props auto-rotate and the lifting gas envelopes act as ballutes, a utility which has lead to the adoption of skymoths as 'life boats' for skystations and some airships. However, even a powered skymoth is incabable of returning to the inflection layer under its own power. To solve this problem, a skymoth which somehow manages to escape the inflection layer can be deflated and disassembled to be shipped back to the inflection layer aboard an airship, whether altogether or in pieces across several trips.

A skymoth with less than four crew members is seldom armed or armored, as this small of a vehicle is not designed for combat and is too slugish to evade incoming fire anyways. A small skymoth can be used for airship or skystation boarding operations (as the Rostran Archipelago Confederacy Marine Forces and New Cobalt Knights sometimes do), but, in these cases, escort craft are usually deployed to protect the skymoth on the way to its target.

Larger skymoths have been used as orbital gunships, being festooned with numerous ball turrets with overlapping cones of fire to make up for the vessels' slugishness. This variety of skymoth can also feature armor on the level of fixed-wing aircraft, though more staunch defenses would quickly reduce the vessel's speed to the point that it would be better classified as an orbital defense skystation.

Many skymoths feature radio transcievers, though very small versions (or those built for a more 'rustic' experience) use signal flags strung along the support wires to provide visual communication.

Powered skymoths sometimes feature mechanical autopilots, using inputs from magnetic armillaries and inertial guidance gyroscopes to correct for changes in course due to turbulence or other factors.

Rostran-powered skymoths were among the first vessels to explore the full extent of inflection layers near the dawn of inter-tesseract flight in the 9830's AR. These early skymoths had the benefit of being extremely light, using no fuel in their explorations, and featuring bubble cockpits which provided an excellent field of view for their explorer passengers. Once skystations became more common, skymoths increasingly found use in scouting, shuttling, skysweeping, and search and rescue roles.
Price
Inexpensive
Rarity
Common
Beam
Varies; prop span is often the same as the vessel's whole length.
Length
Varies
Weight
Light
Speed
Slow
Complement / Crew
Varies (usually 1-4)
Cargo & Passengers Capacity
Varies (1-2 attached crew/cargo/utility modules)

A skymoth makes a prominent appearance in the short story "A Moth's Choice." In the story, a pair of engaged Navigators from the Navigator's Guild take a two-person skymoth out for a romantic getaway, intending to use the vehicle as a mobile, flying campsite with a stunning view of the cube layers below. The next day, many miles from the skystation from which they launched, a stray bit of uncaptured debris pierces the inflatable crew capsule and destroys the vehicle's emergency radio. This forces the couple to put on their reserve oxygen masks and attempt to fix the leak - all while unable to call for help. Unfortunately, the damage is done, and the couple realize that they will likely run out of pressurized oxygen before they can pedal for help. Each lover tries to make the case that the other should take the remaining oxygen so that they can make it back. Ultimately, though, as the man is preparing to disconnect his oxygen tank, the woman spots an airship on the horizon. They pedal furiously and, through their efforts, are taken aboard before they are forced to make the terrible decision.
Infrastructure

Join Manifold Sky Discord!
World content copyright 2020 Werner Martinmaas (BCGR_Wurth). All rights reserved. Images copyright 2020 Werner Martinmaas or their respective creators. If you see a piece of content not properly credited, please let me know so I can fix it. Thanks for reading!
Cover image: Skymoth by BCGR_Wurth (background by Jesse Zhou)

The structure and modularity of skymoths is meant to evoke the gracile, otherworldly aesthetic of plausible interplanetary spacecraft designs. Atomic Rockets has some great examples of this design ethos.   Thematically, skymoths provide a surreal mashup of an alien, airborne locale with themes of small-scale seafaring experiences (i.e. a few people on a tiny boat in an unfamiliar sea).

Skymoth is such a great name, I love it. I also really like the cultural significance section. :)