Children of Dragon, fear not the shadows, for in them you will step like the wraith of the dead, and move like water through the depths of the earth. So it is decreed, in the name of our father the First Dragon.
— Dragon King Savahe.

The Dorcia are the children of Dragon and Man. It is said in ages past that dragons came down from ancient Sarirpala and cavorted with humankind, and from their coupling came the Dorcia.   Much like their subterranean parents, the Dorcia are naturally drawn to the caves and underdeep of the world, and in the darkest of their shadowy carved cities they have largely stayed beyond the knowledge of human kind. They have become a wealthy and powerful race, trading the riches of the depths - Ytherin and Vis - for anything they could want from the surface dwellers.

Dorcia are similar to humans in general physical construction. They are on average taller and more muscular than human norm, however due to their parentage possess the same internal physiology in most cases. One addition to humans is a prehensile tail, covered in small scales, and tapering to a tip much like that of a cat.

Dorcia are biologically immortal. They possess a regeneration ability related to that of the Dragons, though modified. Dorcia mature much like humans, reaching sexual maturity just two years later at 21, and age after that point similarly, though slowed greatly - with old aged reached around 300. When the Dorcian body begins to fail due to old age, it forcibly renews itself - tapping into the magic of the soul to restore themselves to early adulthood.

The Dorcia largely eat fungi, which they grow and harvest within their deep caverns. They are rarely if ever eat meat, however they compliment their diet with dairy products such as hard cheeses and yogurts.

Dorcia possess large tusk-like protusions from just below their ear, and smaller tusks on either side of the mouth. Their facial skin is usually peppered with small scales of uneven distribution, usually a darker colour of their skin shade. They have four small forehead horns, and tapered, backwards facing ears. Most Dorcia have a slight underbite.

The Swrahk or Under Caverns of the island of Skjaldkong.

The Dorcia are named by their parents at birth, usually a name meant to bless the child with certain qualities. Traditionally names said to represent concepts Strength, Bravery or Kindness, usually derived from the names of famous Dorcia known for those traits. At maturity, Dorcia choose a new name for themselves. It is traditional for Dorcia to integrate the first syllable of their father's name into their own, as well as a word representing their personality or achievements.

Dorcian kind is ruled by a number of cavern cities, each ruled by councils of elders and an appointed Chief. There are over sixty cavern cities, some as small as human villages, and the greatest - Kecia - rivaling Sura City for size, with hundreds of thousands of inhabitants.

Dorcian relationships usually involve several individuals in a polyamorous relationship. Traditionally, females of the species begin courting - except in homosexual relationships, where either male may open the courting. After some months of courtship, Dorcians wishing to formally invite a partner into their relationship group will present them with a handmade token of some sort, which may vary depending on the individual's skills. Often - given the prevalence of stonemasons in Dorcian society - these are carved stone figures, usually of dragons.

The Dorcia utilise brute magic and physical labour for many of their daily tasks. They have not adopted human technology, finding golems unreliable in the tough terrain and difficult to enchant for the complexity of tasks. They however utilise water power significantly, harnessing the power of underground rivers to power constructions such as mills.

The Dorcia speak several variations of a single tongue, the Eler'Hari language.

Dorcia often wear thick leather tunics and leggings, useful for avoiding wounds when dealing with the sharp obstacles of their rocky caverns, and for preserving bodyheat in the cold of their climate. Pendants of precious gems are common adornments for both genders, but little other jewellery is worn.

The Dorcia's history began before written record. Their origins came when humans were still primitive hunter-gatherers, a curiosity to Dragonkind. Some dragonkind grew so curious as to cavort with these strange beings, and from the coupling Dorcia arose.   Though partially like each of their brethren, the Dorcia fit with neither. For they held no power of flight like Dragons, nor were they so mundane as to be human. The First Dragon King, Savahe, used the magic of the Dragon Crown to build for the Dorcia a great underground cavern beneath what would become the human kingdom of Skjaldkong. There, the Dorcia took to the craft of stone masonry with a skill to make even the Aeondra jealous.   Their great capital of Kecia arose in time as one of the largest cities of the ancient world. The Dorcia prospered, using their magic and skill with stone to build not only great underground citadels but vast caverns, complex aqueducts and agriculture. 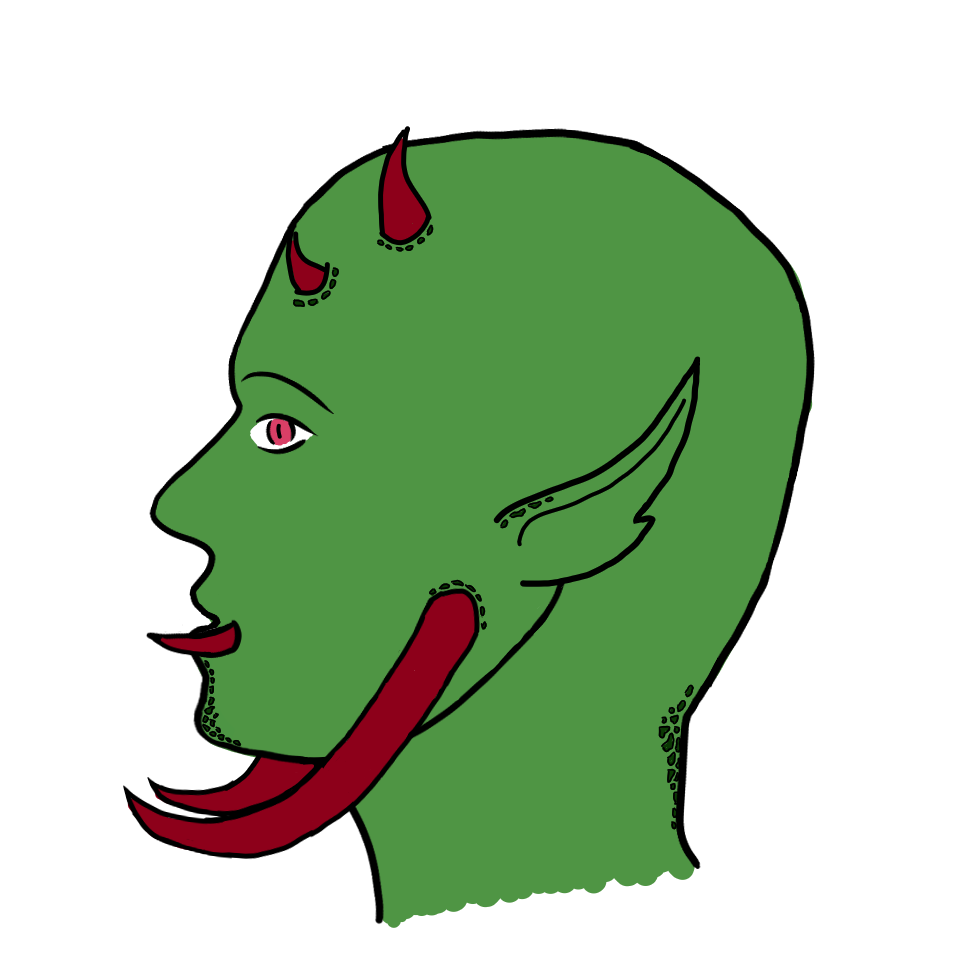 The Dorcia are a fusion of Oni, Orcs and Dragonborn. I wanted to make an Orc-like species that wasn't quite cookie cutter. Thanks to TrapAhead and AetherSomerset for helping develop them and advising me while I attempted to draw them.