Hidden away in the thick and humid jungles and swamps of southern Ivendarea, the Veerali are the smallest ethnic sub-group of the Nyr. The majority of them still lives in the lands of their ancestors, in small villages hidden away from plain sight, but a small portion of them have become nomads roaming the lands east and west of the Skyreach Mountains. They travel from village to village, city to city, telling stories and offering their services as talented artists, engineers, mages, or fighters.   Once the majority of their population had settled in Beldran and Maan Ganyr, mixing with the Wylaai and Gideya. But with both these cities destroyed more or less recently, they have become thinly spread and distrustful to outsiders.

The Veerali's dialect is melodic and smooth, rather pleasant to listen to, and also comparatively close to pure Nyrval. There are some terms and phrases going back much further in time than the standardization of Nyrval though, so specific that they usually need to be explained to outsiders.   Next to Nyrval, most Veerali also speak Trade and despite their isolation are eager learners and somewhat fluent in at least one or two additional languages as well.

Originating from one of the most dangerous but also fertile and profitable regions of Ivendarea, the Veerali call the southern marshes their home. Vegetation and wildlife are rich, sustaining even larger communities with ease. But the swamps are treacherous to those not careful about where - or what - they step on. Flora and fauna are as deadly as they are beautiful.   The Veerali are a reluctant but curious people, very strongly inclined to magic. They have a rich culture of music, art, and poetry, are talented alchemists, and their organic architecture manipulating the growth of certain trees blends in perfectly with the environment. The Veerali are also the inventors of the Riverblade, a type of flat boat with a sail used to quickly transport wares, people, or news along the many small rivers of the swamps. It has become one of the most popular means of transportation across Ivendarea and many sub-types exist for different environments and purposes.   Despite some initial reluctance when the Aman'a Valeethi first surfaced a few millennia ago with their new religion centered around Aman, the Veerali are today devout followers of Aman's Teachings. The virtues and values taught by Aman, their view on life, death, and rebirth and being in tune with the world and one's magic strongly resonate with the Veerali.   On the southernmost shores of Ivendarea the Veerali also have a handful of settlements that used to be focused on fishing, but nowadays are dedicated artists' communities. The Veerali create beautiful sculptures from driftwood and stone, and they dive for pearls and collect other treasures washed up on the shore. They turn them into enchanted jewelry, or incorporate them into their clothing symbolizing their social status in many ways.

The Veerali honor nature and despise its destruction for the purpose of constructing settlements or machines of war. Outsiders are to be treated with wariness and suspicion, particularly after the events of the Invasion War. But those who have earned the Veerali's trust are welcomed wholeheartedly to the homes of this reclusive group.   The Veerali's shyness is not to be confused with a lack of fierceness, and among the natives of Ivendarea they are the best-trained warriors. Due to their strong magical inclination and strength of will they are also very sought-after by recruiters of the Avon Julanor. Despite usually not launching attacks on outsiders, they don't hesitate to fight those who invade their communities.   Widely scattered across many insular communities, they are still well-connected among each other. News travel fast and far, and distances are quickly crossed in times of need. The Veerali stick together and hold on strongly to their heritage, deeply rooted in their values, environment, and community. They are very spiritual people, valuing the upkeep of religious tradition and rituals, tying them into their daily lives.   They greatly enjoy their independence, living completely self-sufficient, although some express a desire to see more of the world, become more connected to the outside, maybe even establish a proper harbour on Ivendarea's southern coast.

Outsiders - be it Assadin or just Nyr from outside a community - are not to be brought into the heart of a village before gaining approval from its respective council. The Veerali don't like surprise visits. As a sign of good will when coming to a new community, the guest is usually required to bring a little gift - it doesn't have to be valuable, but it has to have significance and meaning. Even better than a gift though is offering a service to the community.   The elders as well as those who were reborn many times, are to be treated with the utmost respect, as they carry vast knowledge and are the pillars of the community - Veerali and Nyr as a whole.

Veerali clothing is made from light natural fibres that breath easily and dry quickly in the humid south. While guards and workers in the outskirts of the villages tend to wear more muted colours to blend in with the environment, more vibrant colours are worn in everyday life and particularly for festive celebrations. The Veerali incorporate driftwood, amber, and pearls in their clothing and jewelry. Strands of fabric are braided to achieve not only interesting textures in everyday clothing but are also used to create a thick but flexible padding worn under armour for additional protection. The Veerali's armour is made predominantly from small, lacquered wooden plates sewn onto woven fabrics, resembling fish, snake, or dragonscales. Sometimes similar elements can be found on everyday-clothing and jewelry.   The Veerali are also known to wear a a specific necklace that indicates the amount of times an individual has been reborn, depending on how many precious stones are attached to it. They receive it during their Vath'eran. Being very spiritual and connected to their past, the Veerali have a lot of respect for those reborn many times, deeming them wise and visionary.

Veerali art and architecture is organic and flowing, religious symbolism often sneakily incorporated so that it isn't visible at first glance. Being at peace and one with nature is in focus, so their buildings are usually flooded with light. The base structures for most Veerali houses are trees manipulated during their growth to take on certain shapes that form living spaces similar to houses. The term "house" is definitely a bit of a stretch, as usually a house is not always a connected structure. Much more common are large communal areas at the base of trees where everyone comes together to cook and eat, while higher up in the trees spherical structures contain sleeping quarters and other personal rooms, offering shelter to individuals or small families. Yet again separate spaces for work and personal hygiene are spread across the whole communal area's outskirts. The Veerali wash and cook with collected rain water, and they purify their used water before releasing it again into nearby rivers or the ocean. Water pipes are made from specific types of hollow bamboo. They run entirely above ground, often aesthetically incorporated into existing buildings and structures such as bridges and pathways connecting living and working spheres.

The Veerali braid their hair in a variety of fashions, tying it up, weaving it together, and decorating it to show and appreciate craftsmanship and creativity. Jewelry is worn by most individuals, fashioned from natural materials ranging from wood and metal to seashells and even types of grass. Fierceness and a determined attitude are well-liked and respected, independence and freedom are celebrated.

Persistance is key when courting Veerali, as relationships are serious business and many are very picky when it comes to choosing their partner(s). It needs convincing and passion to woo the other party, fighting for them with all you have is only just enough. Material gifts are not as popular as elsewhere, they have to be truly unique and carry a lot of special meaning to matter. Much more valued than gifts are deeds. A common saying originating from Veerali culture goes as follows: "How many miles would they chase the storm for you?"   Devoting themselves to and sacrificing a lot to their parter, family, and community is a grand virtue, against all odds and probabilities.

Relationships that go beyond pure physical aspects are treated as serious business and meant to last, all parties committing to a shared life together. The partners support each other through all hardships but also enjoy a lot of freedom and privileges within their hometowns. The community will help together to build a new private living space for the couple. Their children are raised in a communal effort, teaching them about history, art, life skills, and their heritage. Bonded partners don't have to take on guard duties or other risky jobs, unless they truly want to, to fully devote their lives to each other, their craft, children, and their home. 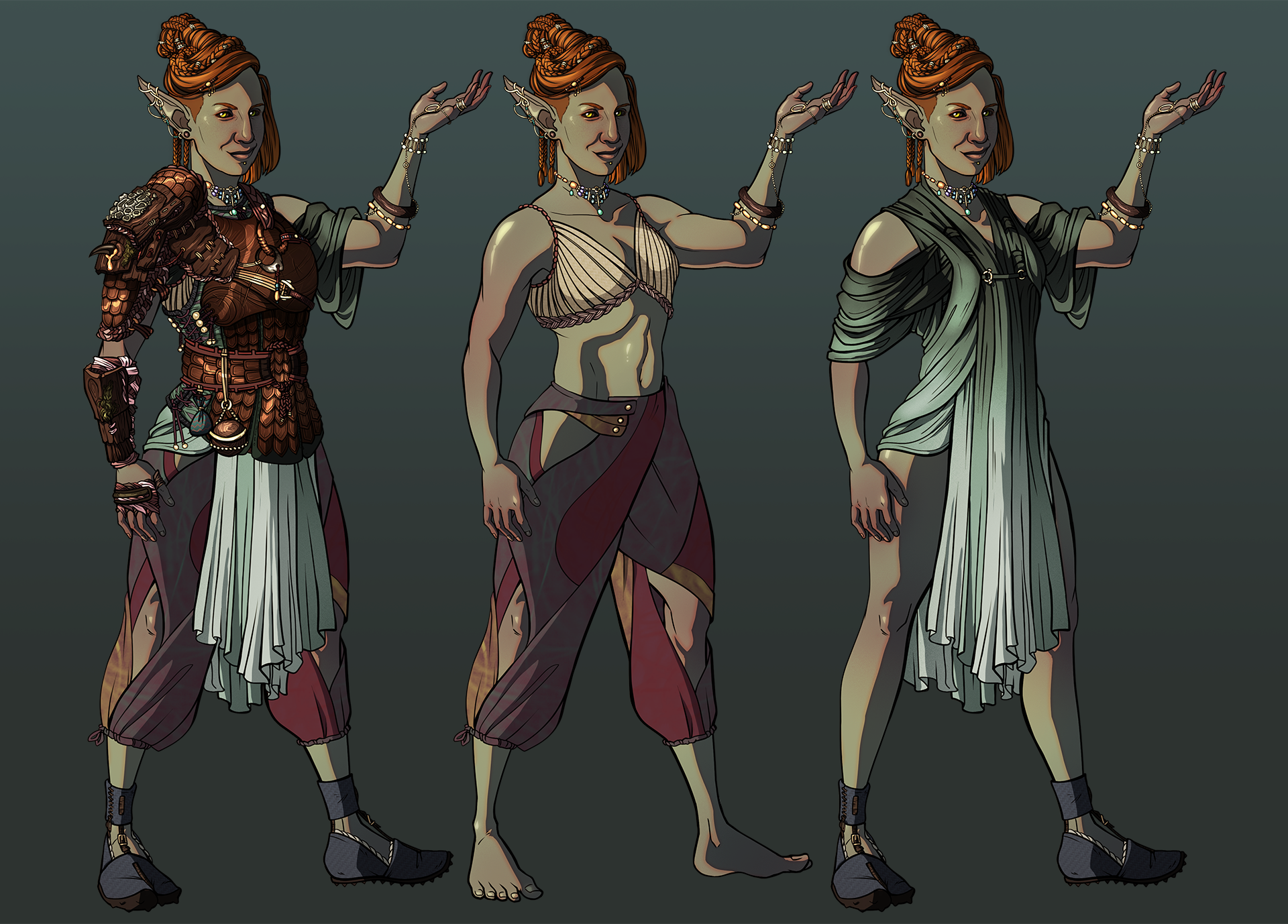 A Veerali fighter wearing a very typical chestplate, pauldron, and glove made from wood, decorated with moss, fabric-straps, golden shimmering resin, an animal claw, and more. Notable are also the shoes with soles made from gum donning little spikes that make climbing easier. In comparison to the heavy armour the clothing more suitable for allday wear is light and breathable, but created with the same eye for detail and organic shapes.