We be sick of all ye landlubbers an' yer poncy rules! Come ta the skies, that be where the real party flies!
— Soarin' Sally's flyerboy, advertising

From a certain perspective, a country can only enforce its laws so far into the sea. Even the greatest navy cannot possibly police the entire ocean and all its happenings, and it is this very fact that gave rise to both pirates and corsairs. But whilst the Stormbrand Corsairs ride out the stormy seas, others have turned their eyes skyward - for if the seas cannot be tamed, then neither can the skies.   One such enterprising captain is Captain Sally Sternhull, leader of Soarin' Sally's Privateering Band. Though her ship had a humble start, she now soars across the skies with a few hundred crewmen - all for the sake of privateerin', piratin' (if the mood takes 'em), and partyin'! At each stop, they pick up upstart bards and adventurers looking to seek their fortunes or have a good time, and it's certainly a good time they have.   Other airships, such as those of the The Tengeriin Fleet, do tend to avoid the boisterous party ship, though if they're too obvious about it, Sally's Band pick up the pace. This usually isn't to do any harm - they're more entertained by flinging fireworks and music in the direction of their skymates. Sometimes, they'll go as far as signalling to the other ship to let them board, though rejection is taken with graceful poise (and sad violin performances).   Mages are Sally's personal favourite to run into, as spellcasters often cannot resist the urge to match the Privateering Band's antics with their own. If they meet over civilisation, the citizens of whichever country lives down below are sure to be in for a treat!

Captain Sally Sternhull herself is from the southern reaches of the Aletheian Empire and, officially, the ship is registered as a privateer of the Empire. Unofficially, they claim their own citizenship in the skies and reject all law other than that of the Captain; given that Sally is usually a pretty upstanding lass, things still go smoothly.   Most nations view the Privateering Band as no more than a minor nuisance. The Medimian Empire is one of the few exceptions: Medimian ships are known aboard as the Rough Reds, as they're the only bastards in the sky who actively pursue the Band en-masse - especially as of 5623's declaration of war between the two Empires, Ordan, and poor Terenholt.

Well, the Captain's at the top. And then she's got her first mate, and.. then it gets a little blurry, really.

The Sallies keep their crew incredibly light-hearted (and drunk). Whilst they do go on their bouts of privateering (and pirating in tougher times), they aren't so crude as to bombard enemy ships with cannonfire and knock them out of the skies. Instead, the large quantity of bards and other magical classes amongst the Sallies means it tends to be easier to drape spells of sleep and suggestion over the enemy in order to more easily rob them blind without a fight.   That's not to say the Sallies can't fight. They've lasted over 20 years in the air by being good at fighting and even better with diplomacy, and anyone testing their mettle will get what's coming. The Wingdinging Pally Sallymobile is fully armed with cannons, trebuchets, firework displays, hoses (connected to varying liquids spanning from water to oil and custard), chickens, and various other pieces of siege weaponry, and the crew are all trained in at least some manner of warfare. Even the bards and their breakdancing goblin friend.

Above the Law and Down to Party!

This world uses trademarks and/or copyrights owned by Paizo Inc., which are used under Paizo's Community Use Policy. We are expressly prohibited from charging you to use or access this content. This world is not published, endorsed, or specifically approved by Paizo Inc. For more information about Paizo's Community Use Policy, please visit paizo.com/communityuse. For more information about Paizo Inc. and Paizo products, please visit paizo.com.
Cover image: Sky Pirates by Photobash by Hanhula w/ thanks to [email protected], [email protected], and [email protected] 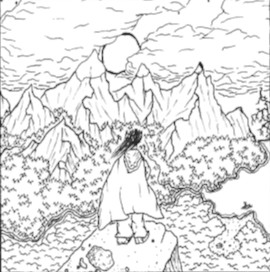 Custard cannons... Now that is something I want to be a part of! Really great article!