In the past 700 years, the rune casters of Remia Academy of the Arcane and around the world have recorded rare instances of a disease affecting members of their schools. In 346 ARC, a registrar, named Dallan MacRae at Rixity Academy going through the records noticed that the instances had become more and more common, with almost 80 rune casters in the past year contracting the disease. It took Rixity a couple of years to get the then Archmage of Remia, Magnolia Harlow to look at his findings because of the rocky relationship between the two academies. Once she saw the findings, however, she immediately wrote to all of the rune academies and told them to send anyone suffering from the symptoms of this disease to Remia and make sure word of it never spread beyond those with the ability to use runes. Since then, casters have watched with growing horror as the number of infected casters slowly but steadily increased, making it more likely for the public to find out. Its only through the intervention of the Survey Council, a group created within the academies whose sole task is to look for the symptoms of this disease, that word hasn't spread already. Today, there are nearly 2665 casters out of the total 150,000 casters throughout the world who contract this disease in a year and all attempts by the other rune casters to find a cure or even effective treatment have met with failure.

There is no known cause for Ataxia Putrida. Initially, when this disease was first recognized and the number of rune casters in the world was much smaller, it was thought that the disease was caused by a rune caster having at least one ancestor who was also a rune caster. This theory was discarded when more students from families that had no previous casters joined the academies and later in life started showing signs of the disease.

First Stage: This stage is often the most difficult to accurately diagnose as the signs are very subtle. In this stage, the caster begins having issues with their short-term memory, attentiveness, misplacing/forgetting where they placed an item and forgetting plans. All of these can easily be attributed to both the caster being overly stressed, getting older, or being distracted by their work hence why it's so hard to tell if a caster is experiencing the first stage of Ataxia Putrida. Rune casters may begin exhibiting symptoms of this stage anywhere from the ages of 35-65. 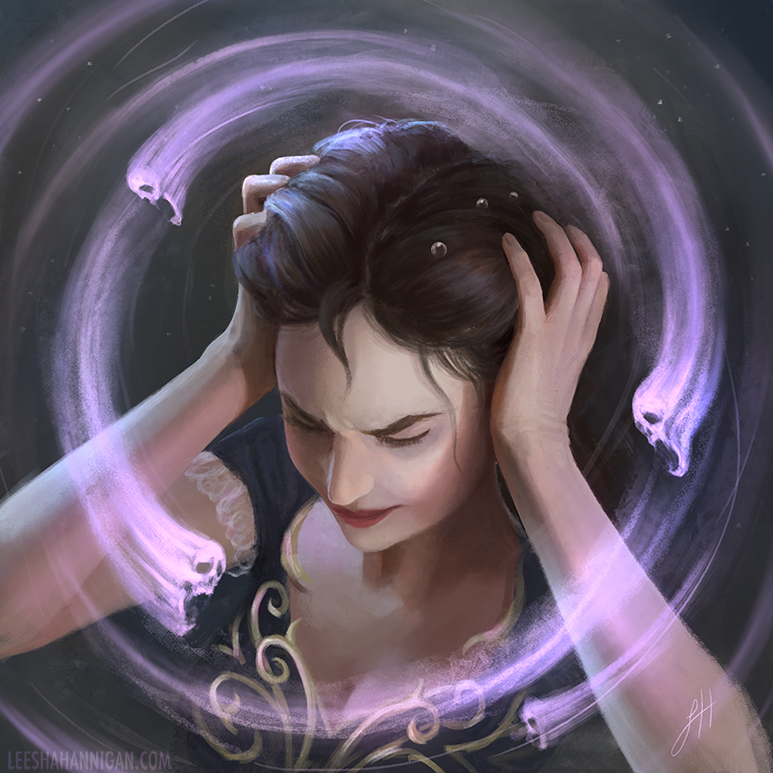 Song of Madness by LeeshaHannigan
Second Stage: The second stage can occur anywhere from 5 to 8 years after the victim begins showing signs of the first stage. This stage is typically identified by the caster's memory steadily degrading with them starting to forget older and important memories. They also start being unable to learn any new facts, often repeating an experiment they have already completed or not remembering notes they made the day before. Word-finding problems are also common, with well-respected casters being unable to remember the names of things like 'chair'. All of these symptoms are accompanied by an increase in rage and aggression by the afflicted caster as they become angry with themselves and a bit frightened of their weakening mind often causing them to lash out at anyone nearby. This anger and the main symptoms make it easy for the Survey Council to identify casters who have Ataxia Putrida. It's in this stage that casters are sent to Remia, with members of the Council accompanying them.   Third Stage: This stage typically occurs 4 to 7 years after the second stage begins. In this stage, the caster's memory degradation continues at a moderate rate with the patient having trouble remembering most memories, often getting lost or wandering and not remembering where they were going, where they came from, and where they are as well as not being able to recognize family members or close friends. Their speech becomes impaired with their vocabulary further shrinking and their ability to read and write declining until it becomes non-existent. The patient becomes uncoordinated as they lose complex motor control, with them being more apt to falling or dropping things. The caster's aggressive outbursts become more common as they are still lucid enough to recognize their declining state but are unable to do anything about it and they often violently resist caregiving. Many younger casters will begin seeking means to end their suffering or ask others to do it for them as they are afraid of reaching the next stage.   Final Stage: This stage occurs 3 to 5 years after the start of stage 3 and will last until the patient dies. In this stage, the caster requires extensive assistance to carry out daily activities as they have lost all motor control and are unable to control their bowel movements or bladder or even eat or walk under their own volition. They are also unable to recognize anyone, regardless of if they've known them for decades or met them the day prior. The patient is also unable to speak and appears to have the mental capacity of an infant. This is the stage all casters fear, and why most take their own lives or ask to be put out of their misery before they reach this state as their pride wont allow others to see them brought so low.

At most, runes seem to stall or slow down the progress of the disease but, so far no caster has been able to find the right combination that would cure it completely. There might be a viable treatment found in non-arcane means of healing but no self-respecting caster would be caught dead using a salve or potion on themselves.

No matter what is tried the prognosis is always the same: the rune caster who has Ataxia Putrida will experience neural deterioration until they are completely dependent upon others and have the mental capacity of an infant.

Rune casters over the age of 35 from all walks of life and sexes are affected by this disease.

As of yet, the rune casters of Remia and the other academies have not come up with a way to prevent this ailment. In fact, a few have noted that runes may actually be speeding up the progression of the disease.

The rune casters throughout the world have done their best to keep the rest of the world from finding out about the disease although, with the number of afflicted showing no sign of declining or plateauing, they know its only a matter of time before non-casters find out.   Rune casters themselves are petrified of the disease, both because they can't fix it and because of how it can turn the best and brightest into a drooling invilid.

I really liked the article, a disease of angry alzheimer's for rune casters. The main criticism I would make is how some of the proper nouns don't have enough context when they are first introduced for the reader to know what they are. An example would be the mention of the Survey Council. When I first read it in the symptoms part, I had no idea what they were about or why they did what they did. It wasn't until I gained the context in the history part later on in the article that I was given that context. I think moving some information in the article around to give the reader some context behind a proper noun before using it would be helpful. I also found it funny and sad how the higher ups ignored the problem until it was too late. And how long it took to get though bureaucracy to report the problem at all.

Ah, you're right. Because I filled out the history before I finished the symptoms I didn't even think about having the survey council not explained until the end. Thank you!

I really enjoyed the article. A well written disease with some confusion on the first pass. However, the only real part that confuses me is, from a historic note, this sentence:   "...it was thought that the disease was caused by a rune caster having at least one ancestor who was also a rune caster. This theory was discarded when more first-generation rune casters joined the ranks and showed signs of the disease."   Feels like if they found first-generation rune casters with the disease that would cement the claim, not lead to it's discarding. But maybe I misread it.   Either way, excellent article! Consider it "LIKED"!

I used the wrong wording, I meant to say that as more rune casters who were the first in their family to become rune casters got the disease they discarded the theory.

I'm reminded of the horrific tragedy that is Alzheimer's, as one of the other commenters noted. I love the detail you've added with actually showing how it was researched and properly uncovered. Do you think they'll attempt to branch out from arcane healing in the future, in desperation?

Possibly but, they would make sure to keep it secret. They've spent too many years making a majority of the world think rune magic is superior to more natural forms of healing for them to suddenly turn to potions and poultices for a cure.