A difficult and complicated past can make for the most interesting people!
— Stefanos Vel-Barboza, Seskyalii alchemist

The Orisnuc ( pronounced 'Oriz-nuck' ) are a people caught in the winds of change. The eyes of history are on them, which can happen when one overthrows the second largest kingdom in the northern Edoya region. An event that happened because that country's king tried to skip out on paying a debt to an Orisnuc leader. That was an insult. The Orisnuc took it quite seriously.

Scholars have found records suggesting the Orisnuc come from the blasted region known as the Howling Canyons in Eastern Edoya. However, when the Orisnuc lived there, the canyons were thick with forest and flowing water. Blue grasslands wandered through the entire length of the canyon's maze. That came to an end with the Black Sand Swell that turned the canyons into a maze of ruined badlands. Surviving clans migrated south then west into the wide stretch of the Longgrass Plains making a new home.

Resettling brought them into regions occupied by, or greatly desired by, several kingdoms from early Samakar to the Geldar Republic and most of all the Kingdom of Angesh. The newcomers weren't exactly welcomed with open arms. Reactions spread from disgruntled acceptance to mild hostility.

Out of this friction came the legendary tales of savage brutality and a 'bloodthirsty horde'. A poor, if not insulting, description of a passionate people with rich traditions and deep respect of personal honor and community.

I must admit to some bias since I had just been in the wilds studying trolls ( a lovely experience I relive in my nightmares when I have split-pea soup ). So, my time with the Orisnuc was a relief!

Not only was I safe from rampaging murder moss, but you haven't lived until you've experienced Orisnuc Combat Cooking! The Fighting Battle Muffins aren't to be missed!

Unless they are thrown at you...
— Stefanos Vel-Barboza, Seskyalii alchemist

Family, Society and the Jupeta

Blue field of the canyon burn and writhe... necromancer magic blot our skies.

Oh, sleep little one, we will survive.

Long grass waves like the sea... such dry days, oh cold nights, hungry we will be.

Sleep little one, we can survive.

Lands plenty but friends are few... troll, wolf, gargoyle bat, will all come to eat you!

Sleep little one, we do survive.

A home we build all our own... find our place in the sun.

Sleep little one, we have survived.

Orisnuc trace their lineage along matriarchal lines, similar to the Nodin. Tracing lineage and bloodline has a place of importance but doesn't dominate Orisnuc lives. Bloodlines are important to allow members to understand the stories of their ancestors. The Orisnuc believe that their ancestors speak through those stories to offer advice of how to act or how not to act in life.

Despite the importance of bloodlines, in practice, Orisnuc daily life is structured around a strong sense of honor and family. Roles are shared between adults. Men and women share responsibilities with regards to caring for the home, family members, food, cooking and so on. To the Orisnuc, there isn't a concept of a "man's work" or "woman's work". There is just work to do for the family to survive. Everyone in the family is expected to share the load as best they can.

The Orisnuc family is called a jupeta, which roughly translates to ‘clan’ in Common. A jupeta was comprised of 4 to 6 individuals living and working together. A jupeta would live, travel, farm, or hunt together with 10 or more jupeta. Now, with the adoption of so many new settlements as clanhouses, the number of jupeta working together is larger than ever before.

Now, this collection of jupeta would be called a sauri, or 'clanship'. Outsiders often call these family collections a 'tribe', a word that means 'a group gathering to celebrate' to the Orisnuc. From the Orisnuc point of view, they are often too amused to correct the mistake. Outsiders also mistake a sauri for a 'town' or settlement which is not the case at all. The sauri is a community. Settlement and community are distinct and separate things for the Orisnuc.

Outside the sauri would be the kowatek. This is more of a trade confederation between communities that involved arrangements on territorial boundaries and trade.

Orisnuc society has historically been a people on the move. Seasonal nomads, they would migrate between locations each season along the same route, yet moving no farther than a week's travel from a central settlement, called a "clanhouse". Even now, after the establishment of KaraKorum, those Orisnuc who live within the borders of the kingdom, still migrate seasonally to a series of established settlements within a jupeta’s territory.

Keeping a sauri functioning is quite the task. The Orisnuc society structure has certain roles to help handle this from the management of resources, security and creation of necessities.

A temporary rank among the Orisnuc of a person that handles trade negotiation and judgement in matters of law.

Not a rank but an important profession among the Orisnuc that is the local blacksmith and weapons' master.

A term that means "First Among Hunters", the Khefil is responsible for maintaining law and handling the defense of a sauri

The second, called Tempeh, is an older method of writing used by the Orisnuc. However, this doesn't involve ink and paper but thread and wool. Through a deceptively simple application of wool dye and knitting, the Orisnuc developed a "knot language" over the centuries. Through this they record their most sacred events, stories and more. Legends handed down among the elders suggest the practice began during the Black Sand Swell and its pumice sandstorms.

Anyone who has dealt with any Orisnuc jupeta has encountered their steady, pragmatic approach to situations, and a strong sense of honor. The Orisnuc call this the Way of Oris. While it may sound like a religion, it is nothing of the kind.

The Way of Oris is a creed, a philosophy handed down from an ancient philosopher and swordmaster named Oris ot'Imana Kuralti Sandswimmer Swiftedge. This is the same Oris Swiftedge that fought to stop the Black Sand Swell. When he failed, he was the one that rallied the survivors, leading them to newer lands.

The teachings of the Way of Oris provide a guideline as a way of life. It is a code to which the Orisnuc aspire to follow. The philosophy emphasizes integrity, honor, and strength of character.

Religion and the Planes Mysterious

Religion for the Orisnuc center around the Cycle of Spirits which encompass Grandfather Sky, Mother Moons, Father Sun, and the Spirit Winds. The latter encompassing dozens of elemental spirits from the grass, to fire and other elements. Together, this forms the basis of their beliefs.

An Orisnuc doesn't pray to one more than the other as might be found in other cultures. They observe reverence to each member of the Cycle, believing that by doing so, everyone does their part to help move the cycle in proper direction. The proper direction being believed in alignment with the rising and setting of the sun and moons.

One spirit, which stands out among the others in the Cycle is Brother Squirrel. He is a spry trickster that is said to be the patron spirit of survivors.


The Way of Oris, or 'The Wheel' as a lot of the Orisnuc call it, is broken into five 'books' or what they call 'directions'. There is one for each point of the compass. The fifth book, and the most fascinating, represents the center of the compass. The 'self' and personal character.

One of the most common value is to greet even an enemy with respect. It's not uncommon for an Orisnuc to greet friend or foe by asking "Onchuck mel hampo?" or "Have you slept well?"

Orisnuc architecture is a simple affair and falls into two groups of permanent structures and temporary. This simplicity isn't due to being a primitive people but a culture that places an emphasis in minimalism. 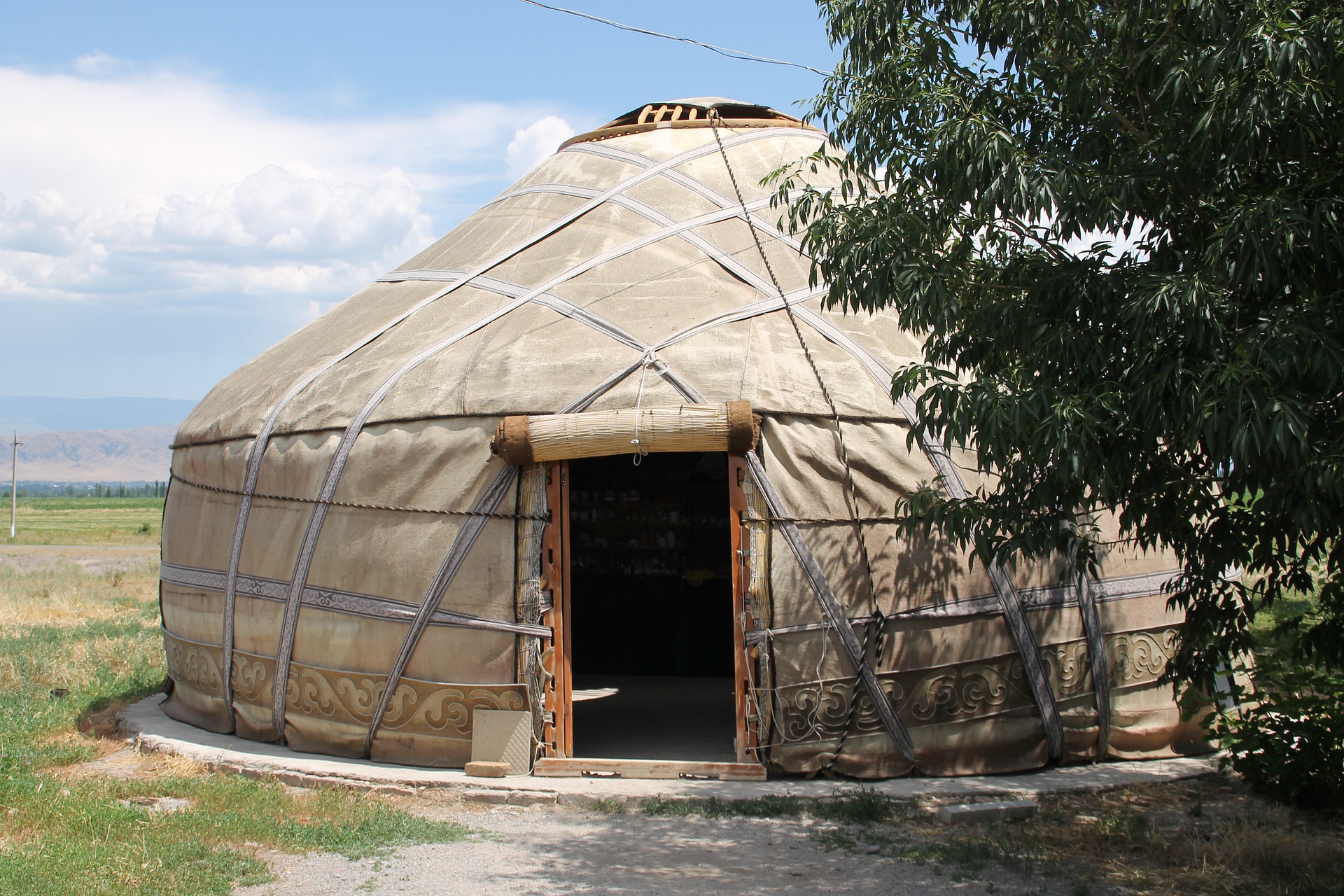 
Temporary structures, called jheir, are used during seasonal migrations to hunting or farming areas. They are large, round tents with a dome shaped by curved wooden supports. The wooden poles are fashioned so that they fold around a hinge to allow them to be broken down or assembled quickly. Material that is lashed over the surface of the tent is a tough cloth made of hemp and the wool sheared from woolly rhinoceros. The sole roll up door is a double thick woven mat comprised of wooden slats, hemp, and knotted with wool. Coincidently, the knots holding the door together are the instructions to assemble the jheir written in tempeh, the Orisnuc knot-language.

The permanent structures use a similar curved construction. Mortarsmiths shape wood beams into curved frames that in turn support both thin strips of wood combined with hide and wool. The top has a type of clay-thatch tiles that help prevent water or snow collection. Buildings themselves are not painted but left natural to allow the wood grain to stand as a part of the décor. The final look to the building looks similar to a tall domes, almost like an elongated set of gourds.

Shutters and sturdy sliding doors separate inside from outside. The interior relies on sliding doors that can be moved to different locations to repartition a house. This is done every spring as part of ‘spring cleaning’.

The Orisnuc have a great sense of humor. Such as swapping around the interior doors at night after a celebration. And while I might have tried too much Redroot wine, having all the doors lead to somewhere new made for a... challenging... morning.
— Stefanos Barboza, Seskyalii alchemist

Orc and human are the most common species represented in the Orisnuc. Goblin and dwarf are the next most common.

Light Footed All Orisnuc are taught to dance from an early age. Therefore all Osisnuc have proficiency in the Acrobatics skill, if their class doesn't provide it.

Adept Riders The Orisnuc are taught to ride horses, woolly rhinoceros, and other domesticated Longgrass Plains riding animals as part of their culture of migration. Orisnuc have proficiency in Ride, if their class doesn't provide it.

An Orisnuc’s full name consists of a personal name, their bloodline ( which is often the jupeta ) and a surname selected when they reach the age of maturity. Honors, deeds and other events are added as the Orisnuc ages.

The bloodline, or family, name is proceeded by “ot’” which means “of the waters” followed by their bloodline or jupeta name.

They only ever use their full name in formal situations since an Orisnuc’s full name is technically a formal history of that person. In average situations, an Orisnuc uses their first, or personal, name and their bloodline name.

A term that means "First Among Hunters", the Khefil is responsible for maintaining law and handling the defense of a sauri

Not a rank but an important profession among the Orisnuc that is the local blacksmith and weapons' master.

A temporary rank among the Orisnuc of a person that handles trade negotiation and judgement in matters of law.

I kept thinking of the Mongolian tribes while reading this, and lo - there was a yurt picture. :D You do a great job showing both sides, and yet an overall favorable view.

Thank you! And there's inspiration from from Mongolian, Iroquois, Bedouin, good old fashioned "Orc" from some obscure sources, and a few more. And! Give a player plenty of depth to mine out of the culture for game play! (or a story or three :D )