Darkness Moon Chronicles    Encyclopedia    Technology      Magick Light
To see through the dark, one needs a source of light. In the Itude Empire's early days, torches, oil lanterns, or a firepit were the only light source. But in 1389 EoL, a rustic tunnel in the Fiend Cavern was excavated, and a room full of glass bulbs sparked with electricity. Curiosity struck the miners, who immediately began stealing a few of the bulbs for themselves until they were caught using the bulbs in their homes and questions were raised by officials.   After a few days of interrogation, the miners revealed where the bulbs came from. The light source was removed from the room and moved to the Research Lab of Aetherogenics of the Faillen League to study the bulbs.   Many decades of research were put into the bulbs before the scientists concluded they were harmless and emitted some magickal energy, but it was unknown what kind. The bulbs were passed on to the royal family and put in various rooms around the Vol'nische Palace, including Crown Prince Kěith's bedroom, Vol'nische Palace Kitchen, Vol'nische Palace War Meeting Room, Emperor Vladimir Tepes' room, and Léhä Tepes' room. While the palace now has unique light sources, there are places where these special lights are forbidden, such as the Vol'nische Palace Dungeon and Vol'nische Zoo.   While it is known how to turn on the lights, how they work or what makes them function is unknown. To power the lights, a tiny spark of a flame brings their glow to life. To power the lights, a small spark of a flame bringing their glow to life. However, when sparks are unavailable, the lights are not used. Emperor Vlad deemed the lights to only be used when candles and lanterns are unable to used. 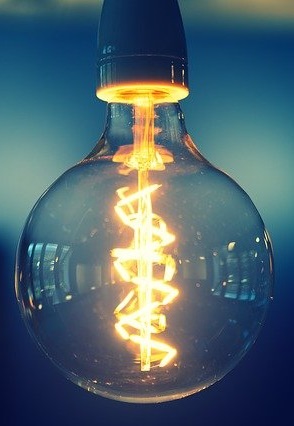 Only the royal family has access to these lights, and even that is rare.

Citizens of the empire believe these lights are cursed relics from Noella, the Sun.

Answering: "A technology lost, forgotten or shrouded in mystery."
Visit amelianite's Competition Page Check all other answers to this prompt Competition Homepage