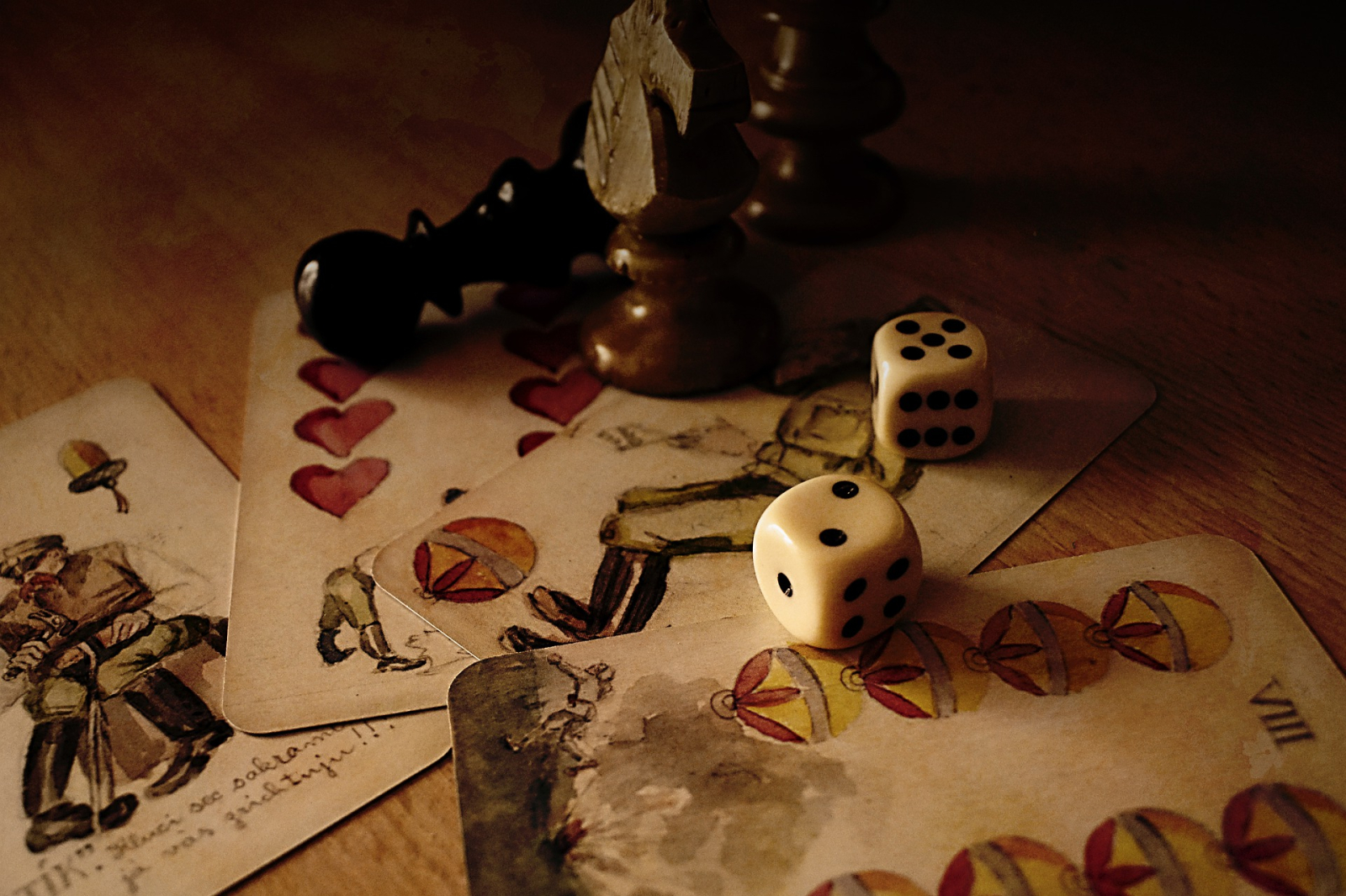 A common game played by the elves, involving a combination of cards, dice, and four sets of chess-like pieces painted red, green, black, and white.

Ælevăt is a game of elements. Each set of pieces represents one of the four magical elements: fire, earth, water, and air. Ælevăt is played between two people, each in command of two elements, and the goal is to conquer the king and speaker of each of your opponent's elements.   Ælevăt is well-known for its complexity; not only does it involve intricate relationships between the different pieces, but there are nine different variations of play, each increasing in difficulty. Masters of ælevăt prove their skill in competitions of the ninth variation. Most humans are only able to play the first and second variations, as the third variation and above add a new mechanic to the game: thought-speech. Even for those humans capable of mental communication, the focus needed to concentrate on multiple levels of gameplay takes years of patience to learn and decades to master. Since they are short-lived, few humans have the time or patience to do so. No human has ever made it to the ninth variation, and only one has ever made it to the eighth, an older mage who'd spent years mastering the game. The strain of achieving the eighth variation sent him into a coma, and he died two years later.

Ælevăt is played on a cross-shaped board made of five connected grids. The central grid is eight by eight squares, with an eight by four grid on each side. In the central section, there are five rings, four black and one white. Each playing set has sixteen pieces: a king, a speaker, two dragons, two elders, two trees, and eight seeds. The sets are each shaped by treeshapers to suit their element. Pieces of air are designed to embrace the air above. Pieces of earth guard the land they stand on. Fire pieces appear burnt or holding flames between their hands. And water pieces have fluid shapes or cradle water in their arms. Ælevăt sets used in saäniis and other public locations are usually all of a similar simple design. But sets belonging to noble families and royalty are works of art as much as they are pieces of a game. The King's private set is said to be so finely detailed that the pieces look and feel real. In recent centuries, as human enjoyment of the game has spread, it has become common for sets to also be painted to represent their element: red for fire, green for earth, black for water, and white for air.   Along with the forty-eight pieces, ælevăt utilizes dice and cards. There is one seven-sided die for each element, colored to match, and forty-four cards. Each card represents one of the sixteen types of pieces. The deck contains a total of forty-two cards: eight of each of the "lesser" pieces, four kings, four speakers, and two wild cards.

Ælevăt has been played by the elves for millennia, almost since their creation by Florian. Before the Elven Unification , each clan had their own twist on the game, though the pieces were almost always the same. After the war ended and the elven kingdom began to flourish, King Lordaerel called for a competition. Elves travelled from far and wide to participate, but it was quickly discovered that the differences between clans made the game impossible to play together. The competition was such a disaster than the elves almost went to war again, this time amongst themselves. Lordaerel quickly cancelled the event and decided that a set of kingdom-wide rules had to be established. Thus, he invited the master players of each clan to meet with him and determine the rules. The effort was daunting, and took decades of negotiating. To satisfy all parties, the game was divided into variations that each embraced ideals of one or more of the clans. In the end, the rules of ælevăt were established to include nine variations, each increasing in difficulty. A new competition was organized, and this time the clans were able to meet amicably. Those who displayed particular skill at the game were honored by the King and declared masters of ælevăt.   The game remained largely the same in the 1500 years since Lordaerel's reign. Elves of all ages enjoy playing the game, not just for relaxation but for mental exercise as well. New ælevăt sets are made by elven treeshapers from different kinds of wood depending on their preferences. After the alliance with humans and the establishment of the kingdom of Etherea, human travelers became more common in the Enchanted Wood, and they began playing the game as well. Due to their mental limitation, however, most found playing with elves to be a condescending and frustrating affair. Still, some humans did acquire sets to return home with, and some craftsmen began making sets out of metal and stone. Ælevăt's complexity stopped it from gaining wide-spread popularity among commoners though, and it remains a game played only in establishments that cater to nobility or in schools that wish to teach strategy and critical thought.   Every fifty years, a competition is held in C'Oros Baal to determine new masters of the game. Though humans are welcome to attend, actual participation in the event is restricted to elves alone.

The basic rules of ælevăt are quite similar to chess, and the pieces move in almost exactly the same way. Kings and speakers can move in a straight line in any direction, though speakers can also be moved to a space adjacent to one of their element's trees instead if desired. Dragons can move forward, back, left or right, while elders can move diagonally. Trees can only be moved to a space adjacent to their element's king or speaker, and cannot be played next to a piece of the opposing element.   At the beginning of the game, the older player selects their two elements and sets them up in the two wings closest to them. The second player then sets up their elements to oppose the others. Wind sits opposite earth, and water sits opposite fire. The player who controls earth goes first, and their turn begins by drawing a card and rolling their two dice. The card determines what piece they can move, and the dice determine how many spaces they have to move it. If a card is drawn for a piece that cannot be moved in the allotted spaces, then that player loses their turn. Drawing a wild allows a player to choose any piece to move.   The rings on the board add an extra twist. Symbolizing change and luck, a piece that starts its turn on a ring can move that piece along the ring's path rather than in its normal pattern. If a player lands ends their turn on a ring already occupied, the occupying piece can immediately be moved around to knock them out.   A game of ælevăt always beings in the first variation, and progresses into each subsequent variation once certain conditions are met. For example, the game advances into the second variation only once both players have moved at least two of their kings or speakers into the center grid. Due to this, few games of ælevăt last long enough to advance to the later variations. Play ends when one player manages to knock out both of their opponent's kings and speakers, or they trap them in a place where no move they take will save them from being knocked out. Trapping another player is called sirova, or "gods' grace", implying that it is only through divine intervention that the loser can be saved. 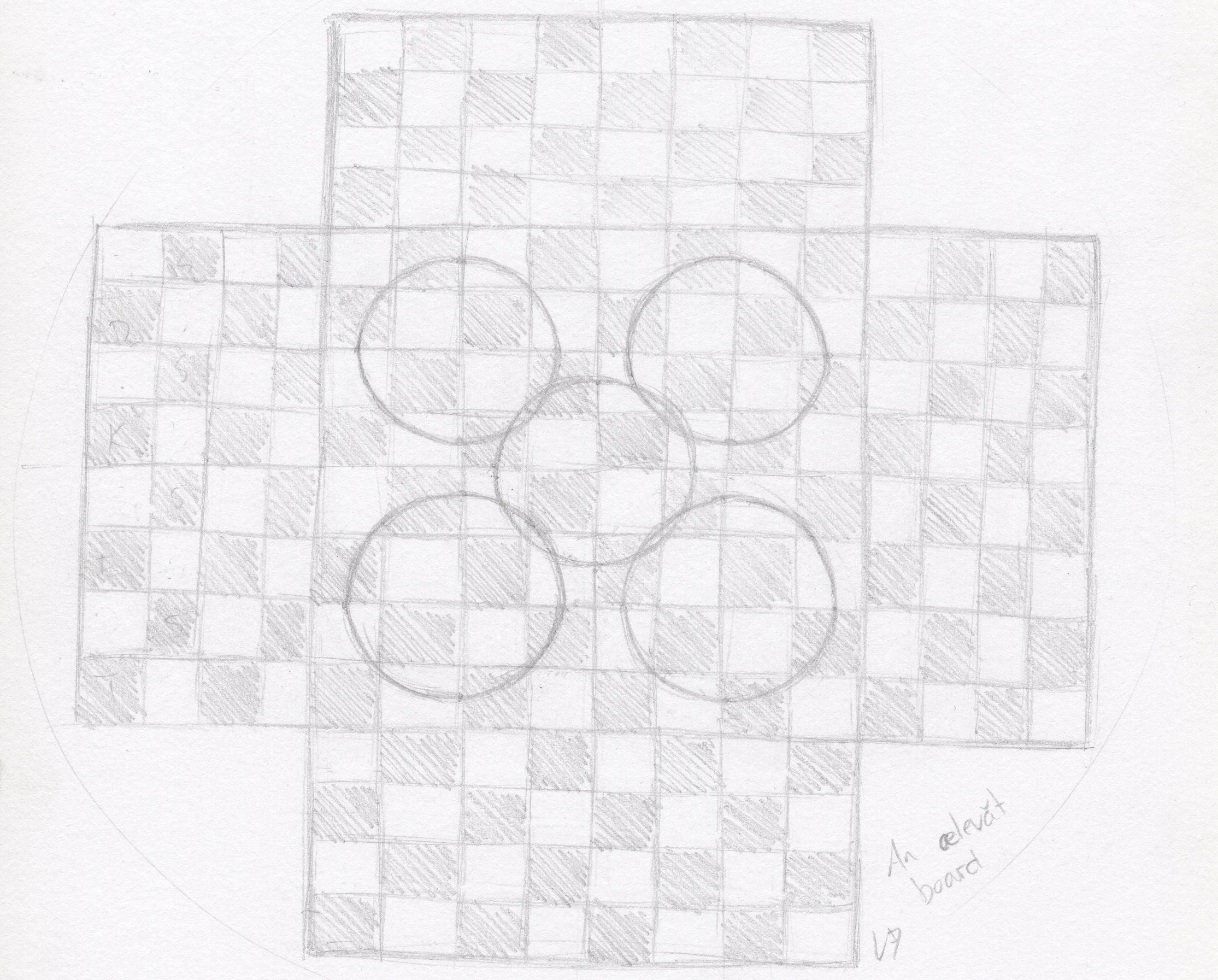 by Kaari13
Kingdoms & Cultures of Dálnaes

I really like that there are nine levels of complexity to the game, and that humans have never got to the ninth level. It sounds like a really interesting game to learn. I guess it's one of those games that'd take a lifetime to master.

Glad you like it. I took a history of games class back in art school where we had to actually create a working game so I've been having a lot of fun actually trying to work out how this game would go. I'd love to actually build it someday. Don't have thought-speech to play with of course, but who knows what will come of it.

I love the bit about the game nearly starting a war. Great little detail that helps show its place in the culture.

Thanks! Glad you like it! I'm honestly having more fun writing about the history of my world's games than the actual world's history.

I'm from the "it's the little details that make the world pop" school of thought, and games are definitely a good example of that. I wrote up a card game for a zine I did earlier this year and it inspired several more standard "World Building Stuff" ideas, including a type of wizard I wouldn't have thought of otherwise.

I'd be curious to learn this (human edition) game! sounds like great fun.

I love the thought you put into this, both the game itself and how it fits into your world. What lovely details.