Marquis of the City of Night
Baron Lord of the Invictus

Illmahgo Reinear seems to be a man in his late 20s or early 30s. The Ventrue Elder belongs to the Invictus Covenant, and serves as the Duke and Warmaster of the City of Ptolus. Because of his tasks, Kindred see him as a stern, stubborn man who shows no interest in the social webs of the city. But even with that opinion, which is widespread, Illmahgo is the to-go person for problems that appear to Kindred in the city.

The burden of failure is the most terrible punishment of all

Most of his people just refer to him as “The Warmaster” and follow him without questioning his orders. At least not in public. He has a good intuition with his subordinates and can be pretty empathic if he wants to be. Illmahgo rewards loyalty and good ideas, but he is also harsh in his punishments, if somebody gets in his way.

There are some whispers that his subordinates don’t feel real loyalty, but follow him out of sheer fear. Therefore, he earned himself the nickname “The Tyrant”, which is never used in his presence. If possible, people wouldn’t even use it when his subordinates or the Chosen are around. In fact, Illmahgo has few loyal friends, but those can count on him in every case.

The way he looks

Illmahgo is a tall man, standing well over 6’2”, with a muscular build. He has pale, slightly golden toned skin, which is covered in scars from the battles he fought during his life. His blue eyes seem hard, like a magnificent sword, and don’t seem to allow for anything else but obedience. His lips are pale and narrow, which improves the stern look on his face, but there are some fine wrinkles, betraying that he can also laugh.

His long, dark-blonde hair falls over the broad shoulders and his back, down to his ribcage. He usually wears it tied back with a black leather band, or braided with a satin ribbon for more formal events. On the rare occasions he wears his hair open, it looks well-groomed and soft.

Daily, Illmahgo wears black leather pants and a tailored leather armor with steel buckles. The shirt he wears underneath this armor is as black and made from fine linen or wool, while the boots he prefers are soft and polished. For formal events, he prefers expensive and tailored clothes, made from leather, fine wool or silk. Lately, he adds a dash of steel-blue or blood-red silk to his formal outfits.

The way he acts

Illmahgo is a strong and proud warrior, and that is something obvious in his behavior. His steps are long and project the image that he would go through a wall if that wall has the audacity to be in his way. He rarely raises his voice, but prefers calm, straight words. Thanks to the deep tone of his voice, he doesn’t have to raise it. If he can, he will avoid talking too much and too formal, or leave the talking to his Speaker. If he can’t, he will be straightforward and avoid all fanciness if possible. To others, his words often sound like a declaration of war.

Even if Illmahgo can be patient, the consequences for failure are at least unpleasant, sometimes even fatal. He is a tested warlord and general who will not waste fighters if he sees another way. But he will also not treat anyone with velvet gloves who has not earned this privilege. 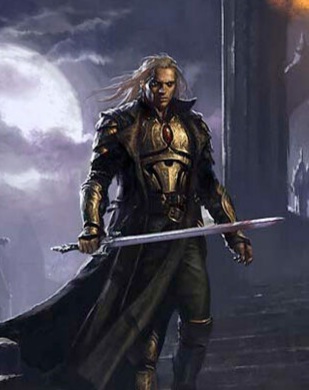