The 28th day of Newyear in the
721st Year of the Imperial Age.

A city of mysteries, secrets, and dark histories, Ptolus lies forever in the shadow of a towering stone spire reaching impossibly high into the sky, itself an enigma and a reminder of evil long past. In Ptolus, the supernatural is expected and treachery lies around every corner—or is it that the supernatural lies around every corner and treachery is expected? Either way, the city of Ptolus abounds with danger, magic, intrigue, and above all, adventure.
- Ptolus Players Guide (pg4)
Ptolus is a major city of about seventy-five thousand people. It is located in the land of Palastan near a large bay on the southern end of the Whitewind Sea. The place was established to serve as the port for an important fortress built at the time of the Empire’s foundation, a citadel called Dalenguard.
- Ptolus Players Guide (pg6) 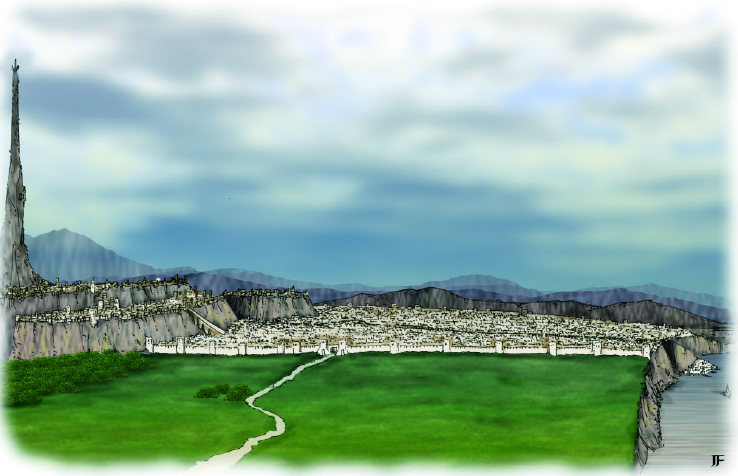 Built on a series of inclines, the city is full of tiers, retaining walls, ramps, stairs, and steep climbs. A street that appears flat on a map could be a steep inclines, while two building that appear side by side could easily be a floor above or below. Major thoroughfares are accessible by horses, carts, and carriages, but minor paths might include gentle steps, usually made of logs or planks, or actual stone stairs, which might be steep themselves. The tiers themselves are overgrown with ivy. Age has made them less level and smooth than they once were, and some of the stones are now loose.   Tiers and retaining walls create even more little nooks and crannies allowing for higher ground and dangerous ambushes. Steep, barely accessible paths might lie between two streets.
- Secrets of the Delver's Guild (pg57) 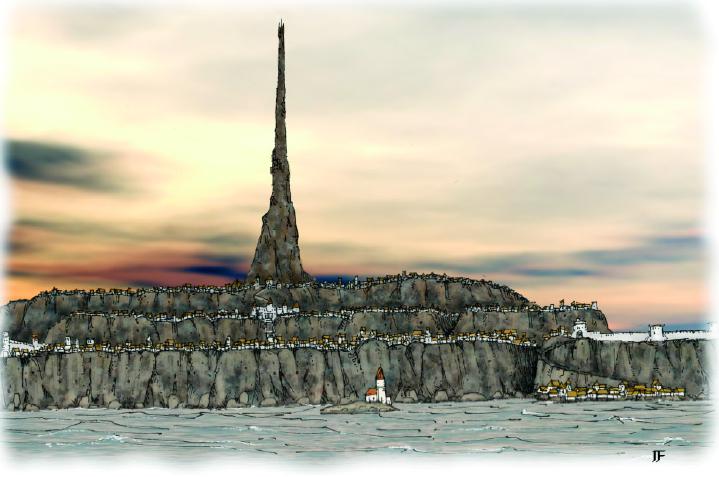 The City by the Spire is named such as it lies in the shadow of an impossibly tall (almost 3000 feet) and thin pinnacle of rock known simply as the Spire. The Spire and its surroundings seethe with mysterious legends and rumors. These tales tell of ancient battles waged and cities erected on the site, of demons and dark lords, of forgotten kings and mighty wizards.
- Ptolus Players Guide (pg6) 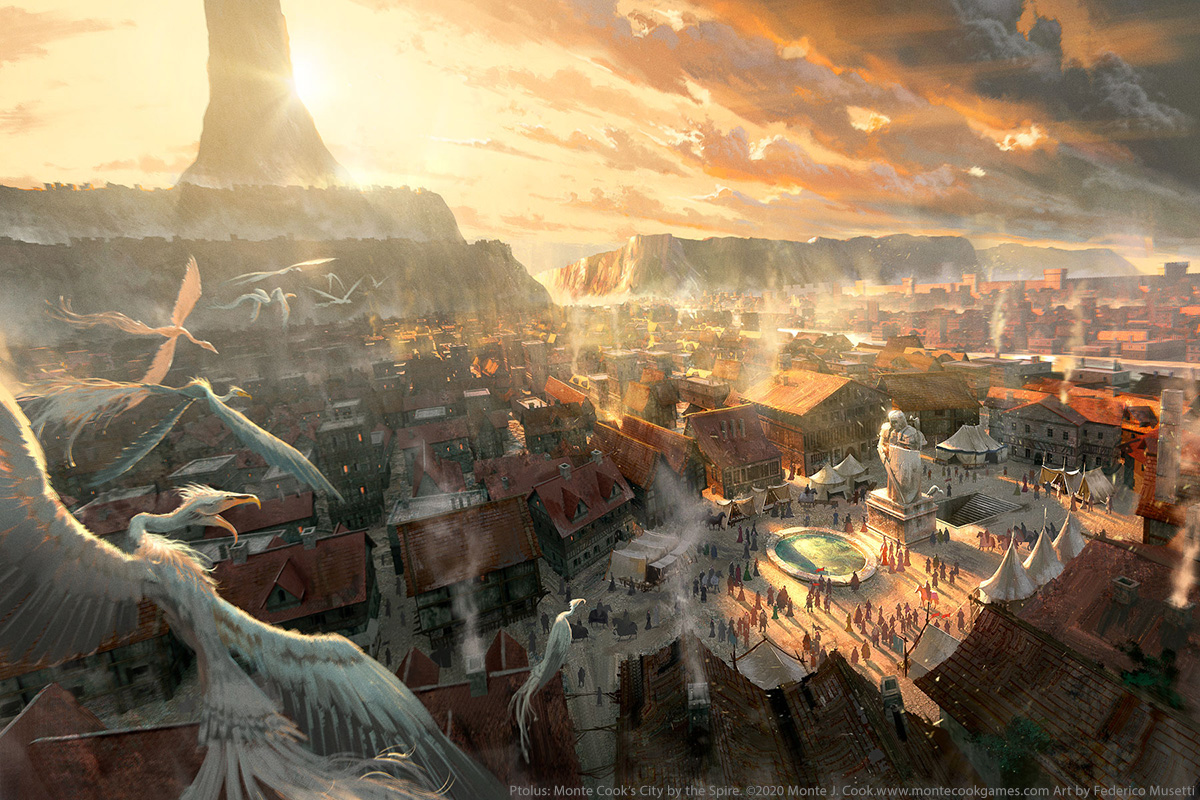 Ptolus lies between the Spire and the sea. The highest portion of the city, the Nobles’ Quarter, is built on the base of the Spire. From there, the level of the city drops down a sharp cliff to Oldtown, and then down again into Midtown. The final cliffs at the edge of Ptolus drop into the bay, with the only area of dry land at the bottom of those cliffs occupied by the city’s docks. Well-worn paths connect the various elevations and help make Ptolus very defensible.
- Ptolus Players Guide 5e (pg7)

Five gates lead into the city: three in the south wall and two in the north wall. Two of these are major gates and three are minor. The major gates are simply called the North Gate (in the North Market) and the South Gate (in the South Market). Both major gates are flanked by towers. At each one stand twin sets of massive iron-bound, iron-hinged wooden portals 20 feet wide, with metal knobs to deter axes.
- Ptolus 5e (pg147)
The walls measure 15 feet thick and 40 feet high. The top of the wall sports battlements on either side; a 12-foot walkway in between them runs the length of the walls. About every 800 feet, the wall is punctuated by a tower. These towers are 50 feet high; each has four interior levels, a flat, crenellated rooftop, and a cellar.
- Ptolus 5e (pg147)

The city is ostensibly ruled by a council, at whose head is the Commissar, a representative of the Empire of Tarsis. The other main council members are Kirian Ylestos, the Prince of the Church, and the Mother Superior of the Sisterhood of Silence (see below). Other City Council members (with less influence) include guildmasters, the heads of the noble houses, and a few wealthy merchants. People of the town often refer to this body as the “Council of Coin,” because money is a powerful and influential force among its members.
- Ptolus Players Guide 5e (pg6)

The City Watch has one primary goal: to keep the peace. To this end, the Watch patrols each district (except the Warrens, although they deny that fact) and maintains guards on duty to answer when called by shouts or warning bells. The Watch has absolute authority in the city, and the right to arrest and detain anyone for any reason. The Commissar empowers them to use force—even deadly force—on anyone who resists. Guards do not need proof to apprehend a wrongdoer, but they’re usually careful not to arrest the wrong person.
- Ptolus Players Guide 5e (pg6)

A language melting pot of races and cultures.

Officially, all merchants in the Empire of Tarsis are supposed to accept only Imperial coins as currency. Ptolus, however, remains far enough away from the heart of the Empire that most people ignore such regulations. This is particularly true of late, as delvers flood the city with ancient coinage or money minted by dwarves, elves, and even dark elves from the Dungeon. Still, some merchants accept only Imperial currency, and all government facilities demand Imperial coin—including for tax payments. But not to worry, as moneychangers in Oldtown, Midtown, and the two Market districts will convert non-Imperial money into Imperial currency for a 10 percent fee.
- Ptolus 5e (pg145)

Two moons hang in the night sky. Lunas is a large bluish-white orb, and Rogue is the smaller, more erratic satellite.

Ptolus has ten noble families, all of whom claim a special status by ancestral right. Although the Empire does not officially recognize their titles, Ptolus is far enough removed from the heart of the Empire that local traditions and beliefs still grant the noble houses hereditary seats on the city’s ruling council. Plus, most of them are quite wealthy, and with affluence comes influence.
Ptolus 5E p92

Dude this is amazing! Totally inspired! I'm going to be watching you!

Thank you so much for reading and commenting. If I may ever be of assistance please let me know.