Basalt Divers of the Teneran Deep

The prestigious among the hardy

You can't give the signal too early, else you won't get any depth. You gotta wait till your craft is shaking, your knees are trembling, and your hearth is thudding. Then, when you think you can't wait any longer... you signal.
— Veteran Basalt Diver

Along the windswept shores of northern Hansun, where the evergreen covered mountains end in sometimes sheer drops to the ocean below, a hardy civilization makes its home. Behind them are often impassible slopes, and infront of them is a wide open ocean, within which is a terrifying stretch of abyss known as The Teneran Deep.   These resilient people make their homes on the cliffs, built upon stable, solid black stone that they quarry underwater, at the edge of the ocean's ravenous maw. This basalt is unusually useful as a building material, and is difficult to find anywhere but on the edge of the Teneran Deep.

Clinging to the Mountain's Edge

When people first began living in this region of Hansun, they had yet to discover the resourceful basalt at the bottom of the ocean; their homes were instead built of wood, with large supports and stilts to offset them off the steep mountains on which they settled. There was plenty of long, sturdy trees to make use of in the form of the evergreen trees that commonly grew in the area -- however, the high wind speeds meant that the wood weathered very fast, and supports were prone to failure.
Over time these people of northern Hansun began to slowly reinforce their structures with stone, building large retaining walls to hold them against the mountainside. At the same time, they began to use their wood for other purposes, building ships and exploring the coastline; this is when they discovered The Teneran Deep's dangerous propensity to swallowing vessels down into its abyss. Many ships were lost in the early encounters with the Deep, until inspiration struck. 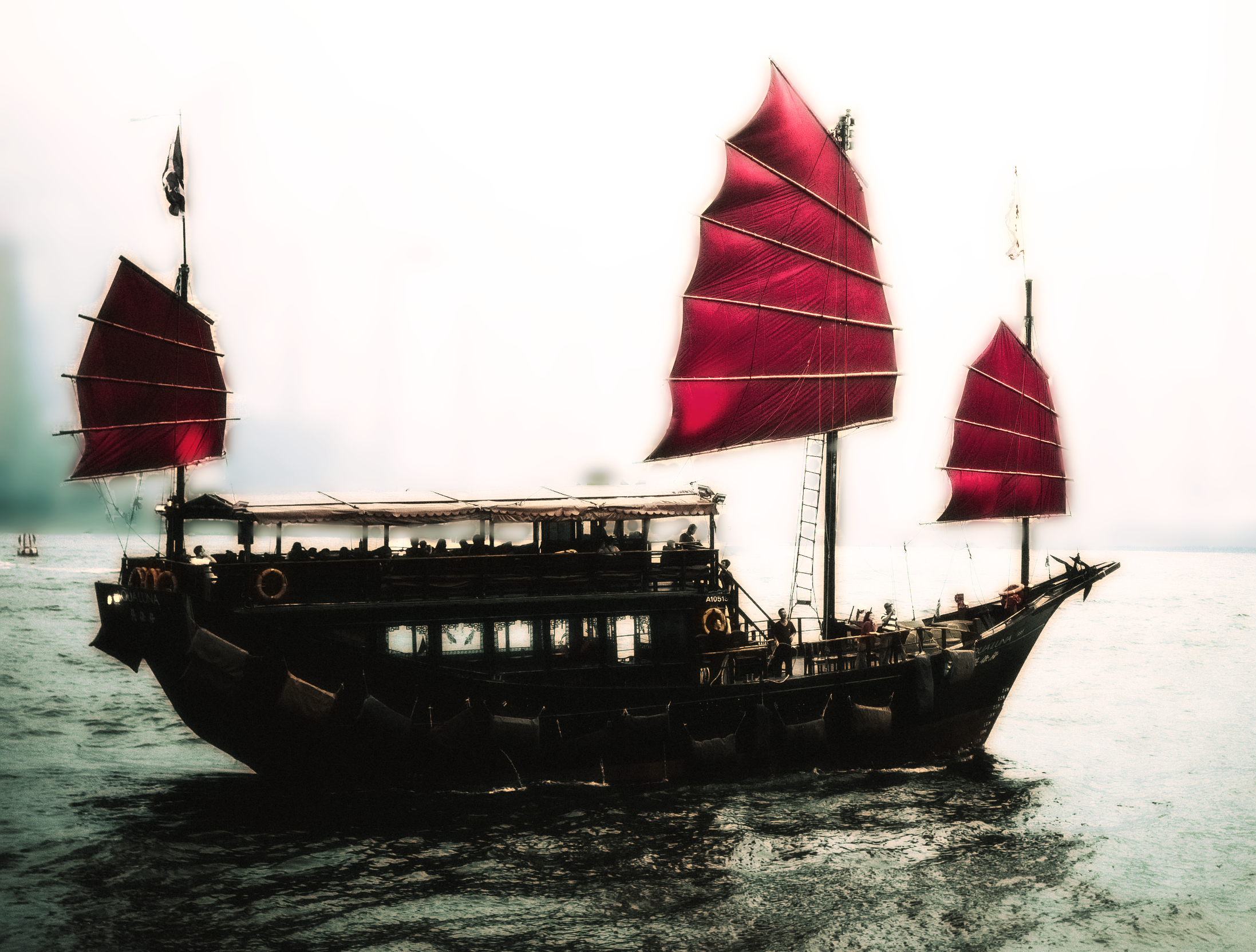 Eventually, after countless craft had been pulled to the bottom of the ocean by the Teneran Deep, someone had the brilliant idea to intentionally be sunk down -- with some safety precautions, of course. They fashioned a rudimentary spherical craft, nearly waterproof, out of wood and sealant. Affixed to the craft was the longest, strongest rope available at the time, which connected to a larger traditional ship located near by.

I do not, in any way, envy those who came before us. Appreciate them, yes. Envy them, gods no.
— Modern Basalt Diver

This duo of vessels sailed out to the edge of the Teneran Deep, where the smaller sphere ship was dropped overboard. The rope connection was triple checked, and the main ship sailed away from the Deep, getting to a safe position, yet leaving plenty of slack in the lifeline connecting the two.
After a short period of time, the Deep below the spherical vessel rumbled and opened up, swallowing the craft whole. The rope went taut, and the larger ship began to be pulled backwards towards the roiling water. The crew, fearing themselves about to be pulled in after their smaller counterpart, lowered their oars and paddled for their life, just barely being able to outpace the pull on the rope.   The entire setup soon shuddered as it seemed like the submersible hit something solid, and then the rope went slack -- moments passed in eerie silence, until the wooden sphere erupted from the surface of the water. Through its surface, enormous slabs of very sharp black rock were stabbed, embedded almost entirely through the craft. While the crew inside did not survive, those who reeled the vessel in to the larger ship were able to collect the piercing stone, and after taking it back to shore , soon discovered its wondrous structural qualities.

It took a few years before anyone was brave enough to attempt a second go at The Deep. But with a little ingenuity and a lot of luck, soon we began quarrying that rocky edge of the abyss.
— Veteran Basalt Diver

Not all who live in this region are Basalt Divers -- but the profession carries such prestige that anyone from the area is automatically assumed to be one. Without the Basalt Divers, most who live upon the cliffsides think that their community likely would not exist.   While only some deal with diving deep below to harvest rock, most residents do in fact have some sort of ocean-based profession; from fishing and transport, to kelp and shellfish harvesting.

A region of ocean off the northern coast of Hansun; believed to be impossibly deep, and prone to suddenly drain huge sections of water at seemingly random times. The area is generally avoided by all sailors, and while it appears to be empty of all life, some think that there's a monster prowling its depths.

Most basalt found throughout the world is either a very compact mineral, rigid in structure, or resembles something slightly more glassy, with a tendancy to be brittle. The basalt found in the sides of the Teneran deep falls somewhere in the middle, with a bonus characteristic; it is rigid, crystalline in structure, but with a flexural strengthening attribute that makes it a fantastic building material. The basalt is either used as is, in large chunks held together with mortar, or ground down and mixed with powdered silica from local hills to create a strong, quick drying concrete.

When people first settled the steep slopes of the northern Hansun mountains, all structures were built upon stilts made of wood, with wood structure above as well. Then, once they started to build out of the black basalt from the sea floor, those stilted houses gradually turned into sheer retaining walls supporting short, squat houses.   For the most part, people kept the rough basalt exterior of their houses as is, and the entire city was built entire in black. Gradually though, people began introducing coloured cladding, adding a bit of variety to the otherwise uniform settlement.
Professions

Answering: "an ethnicity surviving in an inhospitable region"
Visit Stormbril's Competition Page Check all other answers to this prompt Competition Homepage

Join Cathedris Discord!
This work is licensed under a Creative Commons Attribution-NonCommercial-NoDerivatives 4.0 International License.
All content, unless stated otherwise, copyright ©2010 - 2021 Devon Ruscheinski. All Rights Reserved. All images are made by Stormbril, unless otherwise specifically stated. World Default Header Image (Interior roof of a Cathedral) originally by Derek Story, edited by Stormbril.
Background image composited of a Cathedral Photo by Odin Lee, with mountains behind by Sorin Sîrbu, combined and edited by Stormbril.
Developed by Stormbril
Want to support me and get some neat Cathedris art? Check out the stuff I have on Redbubble!
Cover image: by Jan Tielens

Nice article, I love how you show the constraints of the environment and how they managed to surmount them :D And that Teneran deep sounds super cool (I remember seeing it mentioned in a previous article but now I need to go read about that...) I love the story of that first dive - all the people involved in that were completely crazy!

Thank you so much! :D This one was fun to write and tie to the Teneran Deep -- I just wanna add more! :P

The last part about the prestige of the profession makes me think there's people around who claim to be divers, but aren't really. Especially elsewhere, when it's hard to check their claims... Or the rock they're trying to sell.   Such a wonderful and creative take on the diving for stuff profession, especially the idea that they sent down things to just get jabbed full sharp stones so they can get hauled up again :D Awesome, evocative stuff

Oh, absolutely! And you *know* there's some Snakes selling sandstone that's been painted black xD   Thanks Q, this one was really fun to write <3 :D

That's honestly terrifying, that people would purposely go into the part of the ocean that SWALLOWS THEM. I guess if they do it it means I don't have to. Good job then :)

Classic humans, seeing something terrifying and dangerous and REALLY DEEP and going "...I wonder what's at the bottom of it?"   Thanks for the comment :D