Gods and Patrons of Candle'Bre 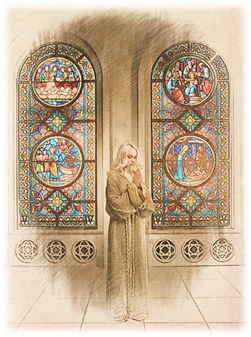 The first thing to note in this article is that this piece was meant merely as a broad overview. If players wish to play Clerics, Paladins or Warlocks, they will find additional information by visiting the Splat Books page and clicking whichever class-specific Splat Book aligns with their preferences. This then, is basically an "in a nutshell" treatment of religion as seen and experienced by the rank and file citizens of the Basin. You won't find any deep, agonizing discussions on the nature of man here, and not much attention will be paid to exactly what acts constitute sins, either. The folk of Candle'Bre tend to be a practical lot. Their lives have been hard and they wear that as a badge of honor.   In practice, a solid majority of the citizens of the Basin worship J'honsa (some 60%), with another 20% worshiping Reyhue and Laernan, slightly less than that (about 15%) worshiping Kaylaar, and the remaining 5% split more or less evenly between Ollux and the other entities we'll talk about in brief below. The five non-deities on this page serve as Warlock Patrons and their followers, plus the few followers of Ollux who remain are essentially widely scattered cults.   It should also be noted that although a majority of the inhabitants of the Basin worship J'honsa primarily, the people here are not shy about asking for some other Divine's favor (Reyhue and Laernan when it's time for planting, Kaylaar when traveling, etc.). It happens. A lot. But at the end of the day, most folks around here fall in behind J'honsa, who yes, represents hardships, but also is the patron of civilization. Law and order. A structured, civil society.   To the people of the Basin, those things (hardship and civilization) go hand in hand, and honestly, in a perverse sort of way, they like it. It is literally all they have ever known, so they've grown to like, or at least take pride in enduring the hardships. The challenges. It has made them incredibly industrious. Those are good things. These people don't shy away from anything.

The Pantheon of the Basin

As with everything else in the Basin, the pantheon of gods is cobbled together from odd bits of other cultures and what little could be saved from Old Imperium. In this, it was fortunate that the refugees who founded the Kingdom included at least one high ranking Priest in the person of Arliss Castillar, and at least one other deacon of note. What few surviving accounts there are of the Flight and Founding make mention of a Deacon Briggs, and it was he who served as the namesake for the city of Brigglund.   All that to say that at least some of the religious tapestry from Old Imperium survived and found its way into the Kingdom.   Like the religion of the land that spawned them, the pantheon of Candle'Bre has J'honsa, the God of Hardships at its head. J'honsa is wed to Kaylaar, the Goddess of Magic, and they have a son together, Ollux, the Polluter, who is the God of the Underworld, the moon, and darkness. One can only guess at the other gods and goddesses that may have been present in the rest of the pantheon of the Old Empire. If there were others, nothing of them survived the journey to what is now the Basin.   The Kellen People worship Reyhue and Laernan, but these are always worshiped together - as a couple. The Kellens have no concept of praying to just Reyhue or just Laernan - they're a package deal and serve as the Gods of hearth, home, family, brotherhood and fertility, among other things.   Like J'honsa and Kaylaar, they also have a son. A divine being being known only as the Master of the Hunt.   Once a year during Wintershiven, the Huntsman prowls the Basin.   No one knows how he selects his targets, but every year, he targets one individual in the Basin and hunts him. He has never failed to bring down his quarry, though what he uses as his selection criteria remains a mystery. (Players, don't peek at the Master of the Hunt character entry. It contains additional information marked DM eyes only.   In summary then, Candle'Bre's Pantheon consists of: 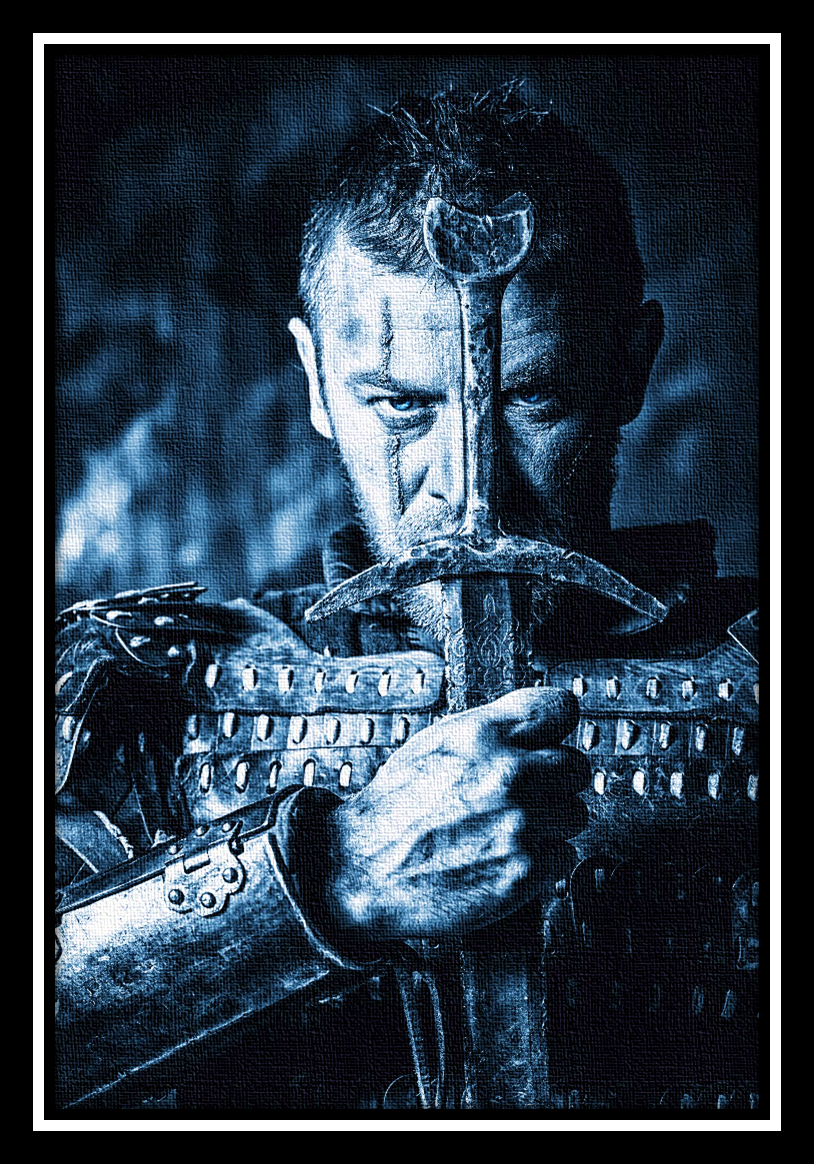 J'honsa, the God of Hardships   (Click link to learn more about the religion) 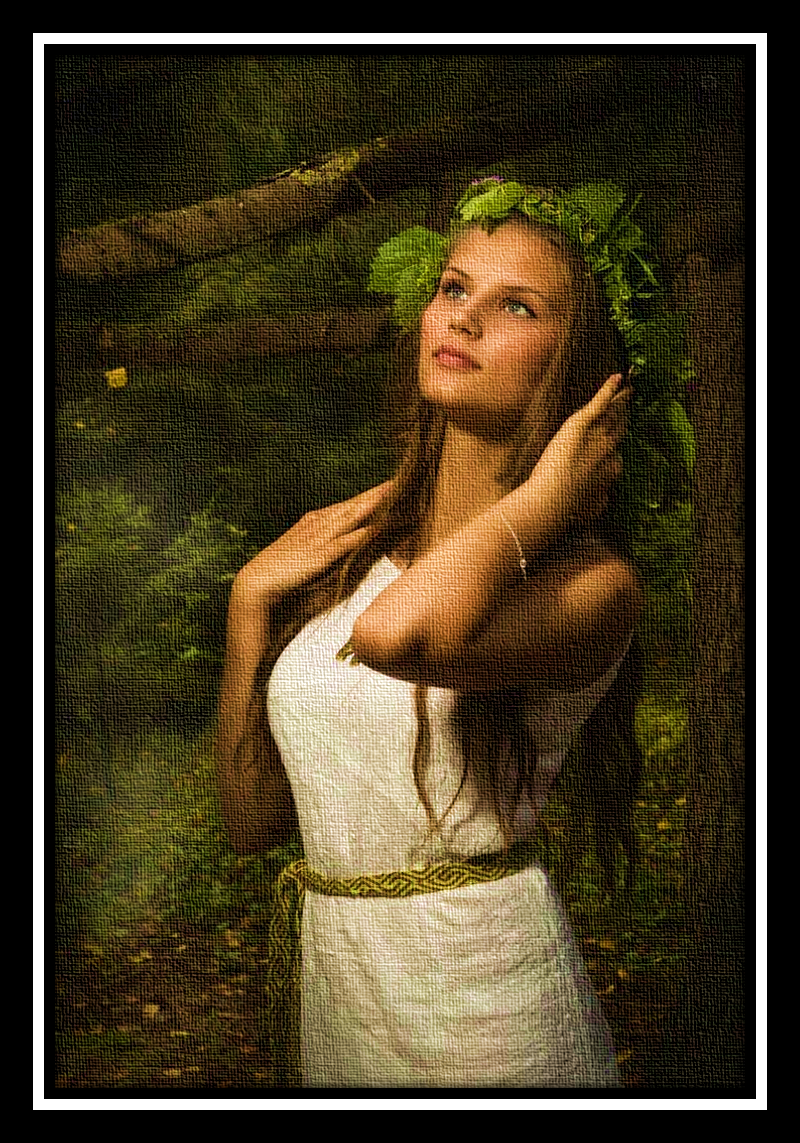 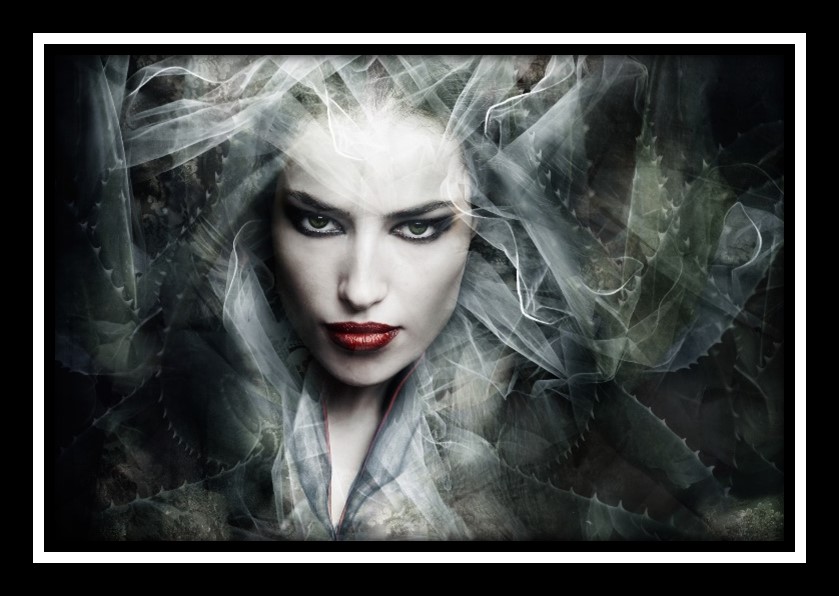 Kaylaar, Goddess of Magic   (Click to learn more about the Faith) 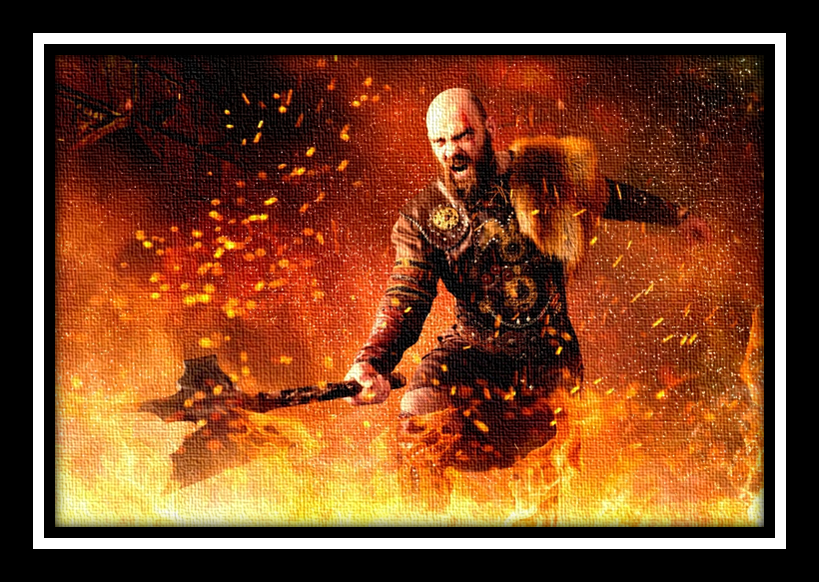 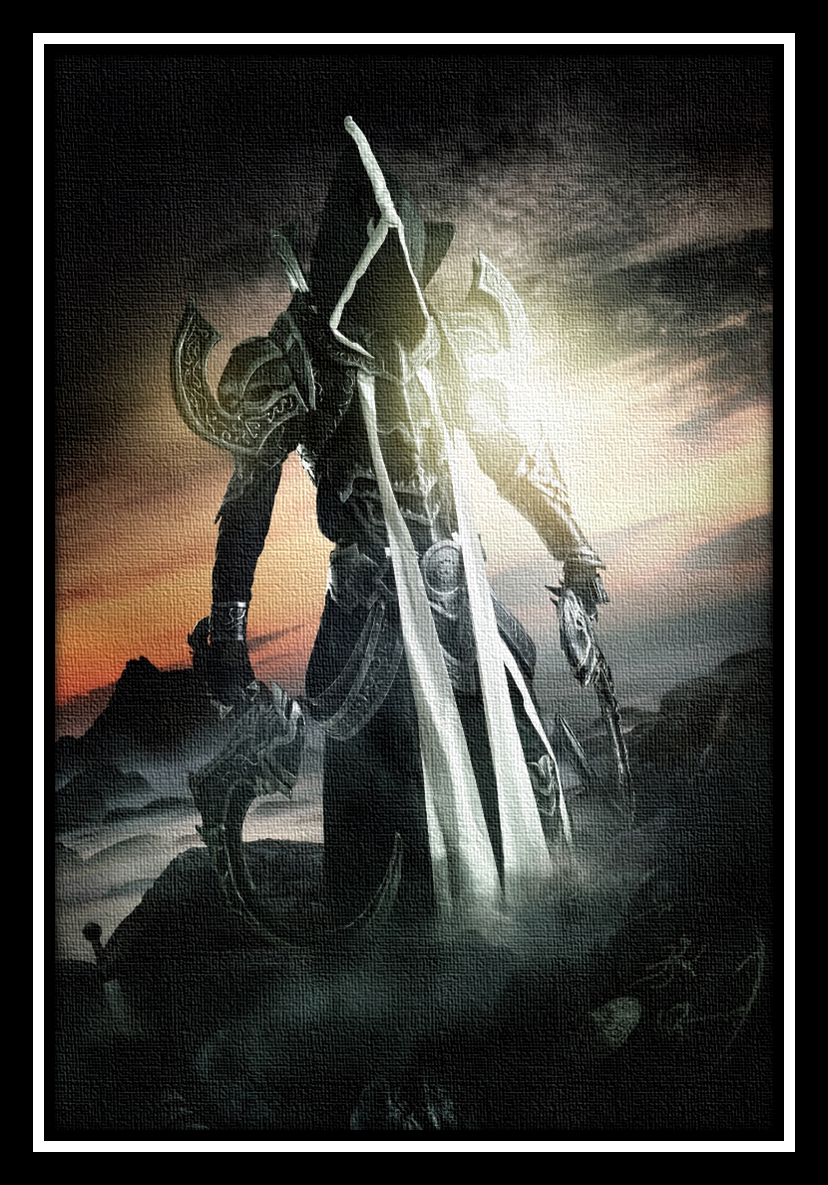 Ollux   (Click link for a closer look at the Dark God, Ollux) 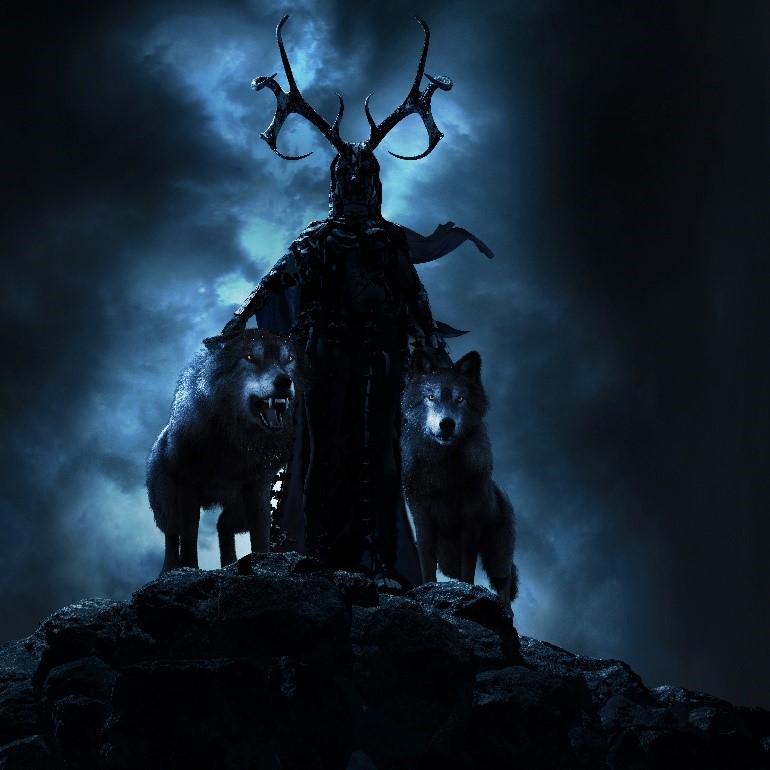 And The Master of the Hunt   (Click link to learn a few terrifying facts about the Master of the Wild Hunt)
This is covered in more detail in the character class Splat Books, but Candle'Bre adds a new mechanic for describing and defining a Cleric or Paladin's relationship with his or her chosen deity.   Performing deeds in accordance with the tenants of the character's chosen faith earns Indulgence Tokens, while committing sins (Mortal or Venal) earns Sin Tokens. Sin Tokens may be countered by Indulgence Tokens, but Indulgence Tokens may be used for other things as well, and may even lead to situations where a Cleric or Paladin can perform more miracles than they would otherwise be able to. In general, not sinning and having a decent supply of Indulgence Tokens on hand is a good thing.

Warlock Patrons have an entirely different relationship with the mortals they deal with.   A Priest or Paladin serves a deity out of a sense of devotion. There's trust and faith there. The behavior of Priests is bound by what his or her God considers sinful, and Paladins are additionally bound by the Vows they swear.   Where Warlocks are concerned, the relationship is much more transactional. "You do this for me, and I'll give you this power. You stop serving my interests, I shall take your power away."   Candle'Bre introduces a new game mechanic to track this as well, in the form of Debit and Credit Tokens. Do something in the service of your Patron, earn a Credit Token which can either be saved up to counter Debit Tokens you may incur later on, or spent to gain an additional, short-term boost in power. Again, we won't go into much detail here, but the particulars are in the Warlock's Splat Book.   As of now, there are five greater beings who have taken an interest in the Basin and who are willing to consider arrangements where service and obedience are exchanged for power.   Note that although the number of followers each of these cults have is quite low, they do tend to be somewhat concentrated. Interestingly, you're just as likely to find a cult in an urban area as a rural one. In urban areas, the cult members can disappear into the background easily and there are plenty of potential recruits, readily available.   On the other hand, a rural area is (or can be) a prime target, especially if a prominent member of a tiny hamlet can be converted first. That gives the cult an "in," which makes it possible to take the whole town over...   Note to DMs: Nothing is free in Candle'Bre. The Warlock class is heinously powerful here, but all of the Patrons tend to take an active, hands-on approach, so if one of your players wants to test drive a Candle'Bre Warlock, be prepared to spend some time thinking about aims and goals, because the character will most definitely play an active role in enforcing the Patron's will.   The Warlock Patrons are: 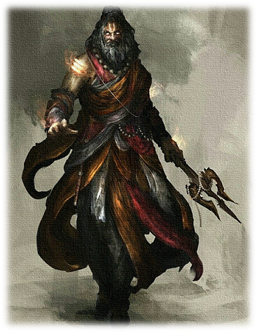 Astaroth, Devil of the Pit   (Click link to learn more about this cult and how to join) 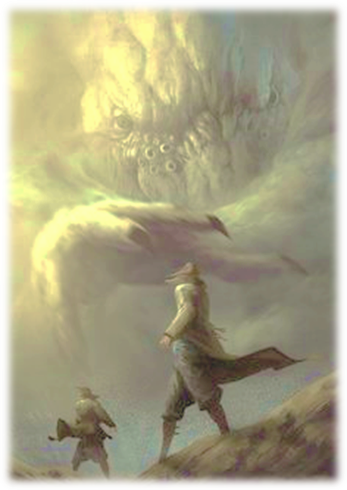 Bel'Sheggorath, Destroyer of Worlds   (Click link to learn more about this cult and how to join) 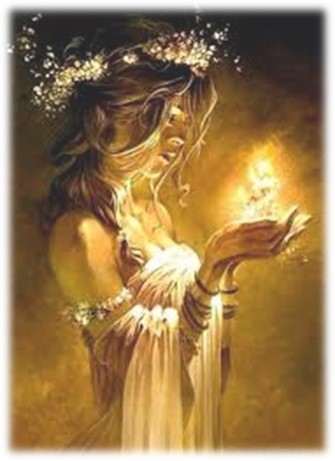 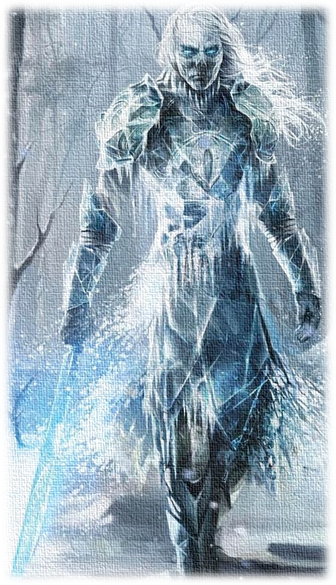 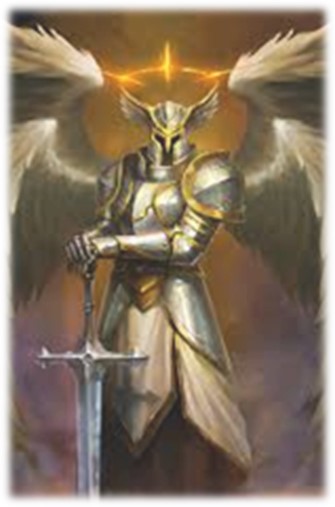 Zathriel, the Sword of J'honsa   (Click link to learn more about this cult and how to join)

To jump straight to the details about any Religion or Cult, just click on the name you're interested in from the selections below.

After the prayer, he commanded Crestmore to rise to receive his sentence, and the man did so without complaint. Without so much as a dark or hard-eyed look in anyone's direction.   "Alan Crestmore, it is the decision of the Holy Church that you be demoted to the rank of Monk and cloistered away for the rest of your years in a Monastery of my choosing."   Erich strode forward and removed the ring for the former Cardinal's finger...the symbol of the office that was no longer his.   "Further." He said, continuing, "I order that your pay be kept as is, but that fully two thirds of it be gifted to Gratiana Ebere to see to her upkeep for the rest of her life....money cannot undo those things that were done to her, but at least it can help make her more comfortable in the years ahead."   He turned to Gratiana. "You are to be considered a Ward of the Church from this day forward, and under my direct care." His voice softened and he leaned in close to embrace her. "If there is anything you need...don't hesitate to call on me direct."   She met his gaze and held it, as if confirming that his words were true. In a moment, she nodded, and wiped fresh tears away.   Erich straightened. "Twenty Temple Guards will march with Brother Crestmore to the Khovars, in Trentare. They leave at first light tomorrow." He announced. "Miss Ebere...you may remain here in the Temple Compound for as long as you wish. If and when you desire to return home, the Church will arrange transport for you."
— The Reckoning, Book III,    Sins of the Father                    (First Actions of the New Prelate)

Your formatting on this is awesome, friend! I may have to take some notes from your quick reference sidebar and such :)

Kind words indeed - thank you, Eraellas! Don't sell yourself short though - Emaxis is a beautiful, incredibly well developed world and the formatting you've got going on there really works! :)