In game mechanics
Because I don't trust myself not to upset the balance in Pathfinder by making a custom race (Though I am very open to feedback or bouncing ideas of someone) Florians will follow the standard Pathfinder rules for Elves as detailed in this link.   Social difficulty: ★☆☆☆☆ - Florians rarely leave elven societies where they are most welcomed, almost like family. However, because of their connection with elves, most civil races do not mind them, only offering mild curiosity at the worst. Because some have pleasant smelling flowers growing on them, they may even serve to add to a room.

Entaflorians, or just Florians, are a race of sentient plant like humanoids that exist predominantly in the green nature of Ayn. Originally they were created as a means to supplement Elves and their lives, either by bolstering their military and defences, or even helping in menial chores like cleaning around the home. However, they were freed from their near automated existence and given life, granting them the ability to form themselves to who they are in the present. Florians are usually very honest and direct, almost to a fault. Although they can integrate well into society, they will rarely entertain affairs of social navigation or political intrigue, instead preferring to speak plainly. Their values are held rather close to their chest, and they are oft passionate about their beliefs, willing to defend them to the end. Likewise, owed to the very reason of their creation, they can be fiercely loyal and a stellar travelling companion. 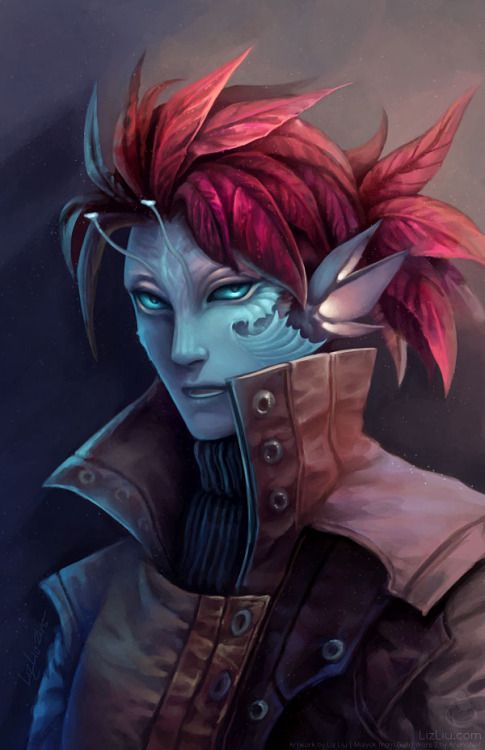 by Liz Liu
Florians are incredibly unique. Although they offer a humanoid silhouette, they are very distinct in their aesthetic ranging from their plant based hair to varying skin colors, which isn't even traditional skin at all...Oft varying forms of flora material. Their ears range from traditional, point Elf ears to flowers arranged in a fan like fashion to even just holes in the side of the head. This unconventional look means they will almost always stand out in a crowd, but fortunately they are socially apt enough to integrate into civil societies, though their strong convictions and need to help may grant them difficulty in more lawless regions.   Their image and properties will change depending on their parents and where they were born. A Florian born in the desert may have small spines like a cactus for hair, or produce tiny cactus fruits, while one that hails from the forests may have vibrant, beautifully arranged leaves atop their head and small blackberries sprouting near their collar. Regardless, their physiological traits will not offer them a distinct advantage over another. If a Florian has soft petal-like skin, it will be no less durable than one born of nearly petrified wood...Likewise, fruits, thorns, or other growths will never reach a large enough size to warrant much use or nourishment, and, like fingernails, generally hurt the Florian to be plucked.

Florians are mostly chaotic like the plants they originally came from, and many enjoy the spirit of a good adventure, especially if joined by companions. They also have a heavy leaning towards good or neutral, but there are exceptions.   If a Florian is planted on corrupt or toxic soil it will not only affect the growth and aesthetics, but also warp the mind and create a potentially evil-aligned spawn. An evil Florian may have more pale/ashy colors to their skin, or even dark and twisted bark. They also tend to favor reds, blacks, and purple, though this is not exclusive. These Florians may hold the belief that nature is superior to man, or that man is the cause of nature's destruction and must be eradicated.   Despite their strong convictions, rarely will a Florian lead - Likely an attribute from their creation. While it is possible, it is the exception, as most fit in far better as a companion or general in an army rather than the actual commander. 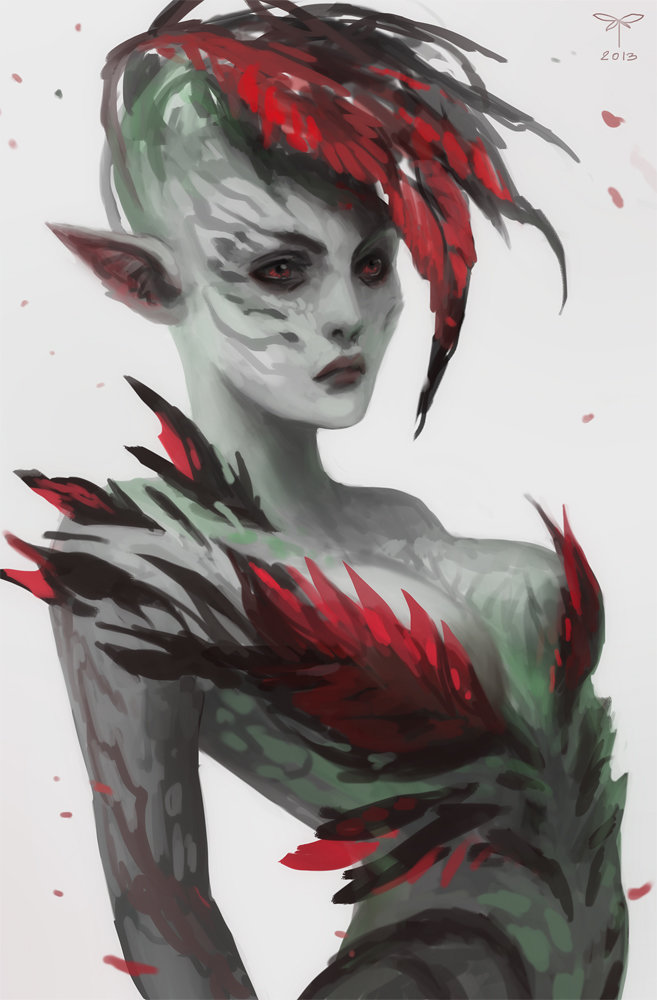 Florians are humanoid in that they possess two arms, two legs, a torso, and a head, but that's generally as far as the comparisons go. Their 'skin' is actually taken from nature and is either akin to bark, flower petals, or in some cases, mushroom trama (Read: Skin). Despite its feel, it functions as skin normally would, meaning if the skin of a Florian is bark like, it will not be stiff, restrictive, or anymore protective than regular skin. Likewise, a flower petal texture does not mean the Florian's skin is weak and any more vulnerable to being cut as any other material.   Florian's hair is very similar. Unable to grow actual hair like a humanoid, it is often either leaves, fiber from a tree, or just a mushroom cap.

Florians reproduce in a method far different that most species. The genders are defined by the plant like organs each possess. A male will have a stamen, which produces pollen, and the female will have a pistil, which houses the ovule. These parts are kept near the chest, either tucked away on their body naturally or under clothes, not that they're offensive in appearance anyways. To reproduce the male and female will embrace in a hug, and hold the position. It's common for the two to share sweet sentiments or lightly sway, but ultimately it's unnecessary as all they need to do is remain still for a long enough period of time, or basically when the pistil is properly pollinated.   Afterwards the pistil grows a seed that forms a slightly uncomfortable lump the size of a knee cap, and is then ejected in a slightly painful fashion, akin to a pinch, to make the female aware of this 'birth'. This seed is planted into the ground and cared for as it grows.

A Florian begins life after two weeks of being planted at which point it becomes a sapling. The growth is very much akin to a plant's growth, in that it needs sun, water, and soil. It is worth noting that a sapling can be transplanted to a pot, but this is highly discouraged as its growing phases and overall health is determined by how enriched its roots are as it progresses. Putting an infant Florian into a pot is akin to swinging an infant by its arms, and should never be done.   Eventually the sapling will grow into what is called a Youngling after a few years growth, generally 4-5, at which point it will begin to try and pull itself from the ground.

A young Florian can be quite sprightly as it grows.

This process takes about a year, where it will uproot itself and begin to walk. At this point, it becomes less like a plant and more of a humanoid child, though will still need plenty of sun, water, and access to soil to occasionally plant its feet into. It will also begin formulating its adult body by molting and replacing itself every few years, either taking on bark or flower petals for 'skin', and defining itself more and more until adulthood.

A Florian is most at home with soil, sun, and a source of water, much like any other plant. It can, however, grow in other places which will affect its biological makeup. An example of this is a Florian growing in a cave and growing a large fungal cap instead of leaf like hair. Or its fingers being gnarled and spindly from growing with little water and among rocks and gravel.

Florians sustain themselves on sun and water, but are quite capable of eating standard food. Generally they prefer fruit or roots, such as beets.

At the end of each year, Florians face a molting and generally feel more sluggish than usual. This is counterbalanced during the spring, in which their bodies bloom anew and a burst of energy fills them. If a Florian produces fruit, such as small berries, they will bloom or wilt at certain times of the year.

Florians can produce various edibles such as small fruits like blackberries, but they grow them much slower and in much smaller quantities than domesticated or even wild crops. This, coupled with the fact that it hurts to remove the fruit, and it's generally not worth the bounty.

Florians generally name their young after nature, specifically plants, but will generally spin the naming to be more contemporary, for example 'Tyulep' instead of 'Tulip' or shorten it such as 'Wisty', instead of 'Wisteria'. This assumes the name isn't already contemporary, as 'Poppy' may already be both a plant name, and an acceptable social name. Surnames are given from where they're planted and after the Elven word 'Dhal' which means 'Of the'. The translations are as follows:   Male: Byrch, Sipress, Briar   Female: Ashe, Lily, Violet   Surnames: Dhalnhin, Dhalvud, Dhalghunn

Florians were originally created by Elves as a means to assist and serve, but were eventually blessed by Birchum - God of Nature at the request of their creator's and given sentient life.   You can read more here.

Florians generally hold Elves in the highest of regards, largely because they are the reason Florians were made or have any sentience..   Naturally they oppose Orcs since their wanton destruction poses a serious threat to the environment, and by proxy, themselves. 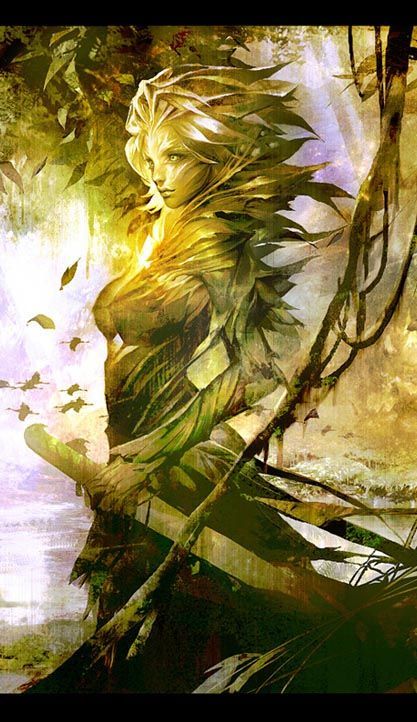 Scientific Name
Homo Entaflorian
Average Physique
Florians are, like Elves, generally lithe. Unlike Elves they are slightly more prone to better defined musculature, even if it will look a bit odd under the nature aesthetic. Also like Elves, they are not known for their constitution.
Body Tint, Colouring and Marking
Florians are quite varied, both among their own kind as well as the other humanoid species. While they not only have different textures of skin, such as bark or flower petals, that same skin can have different coloring. This is dependent on several factors such as where they were planted when they were born, their parent's genetics, growing conditions, etcetera. 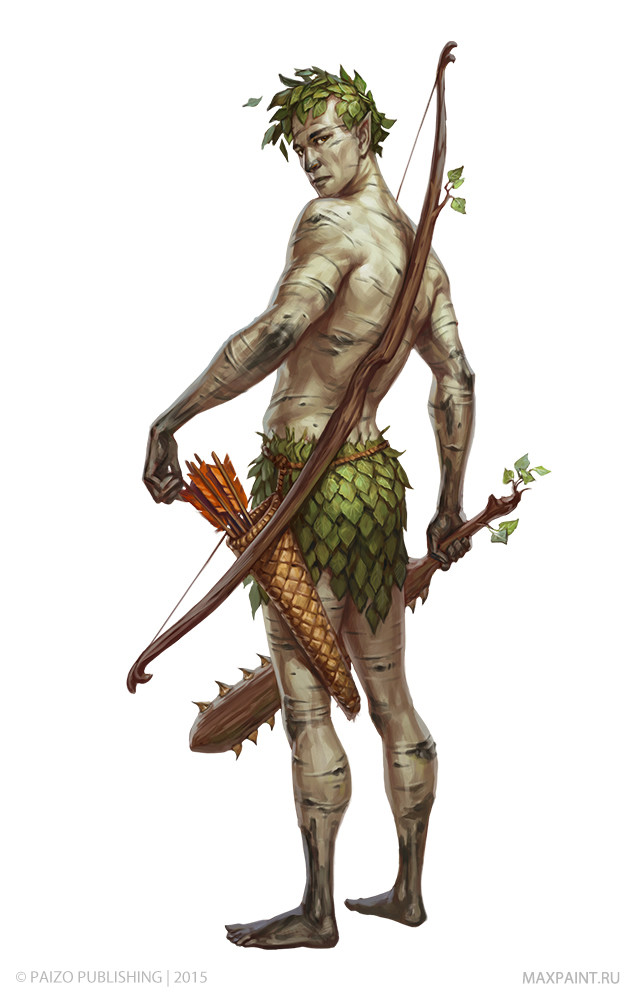 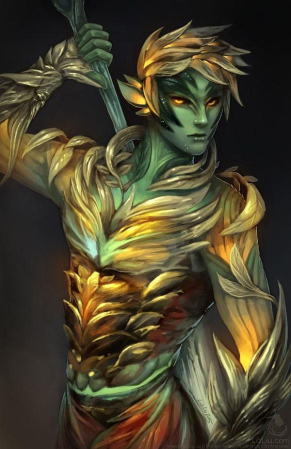 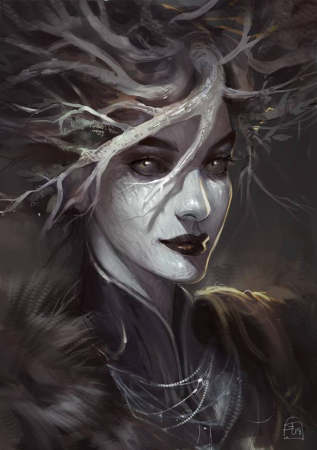 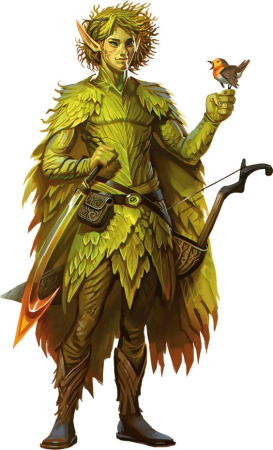 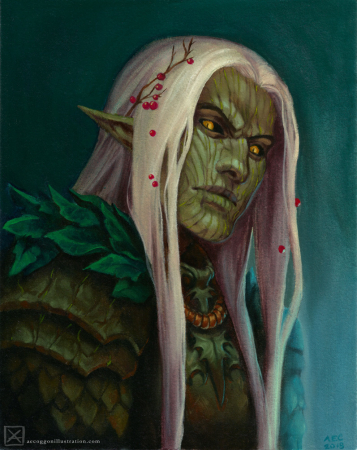 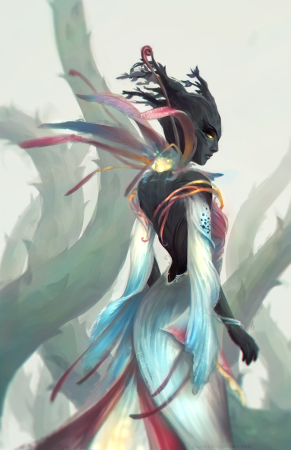 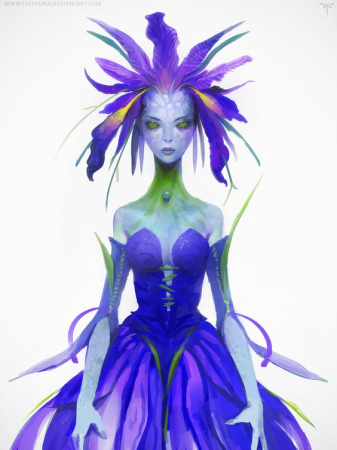 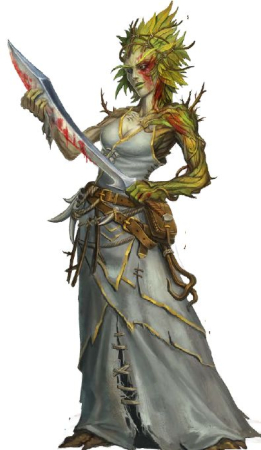 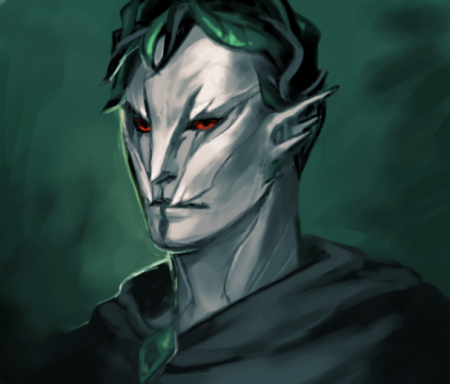 groot alone deserves a like my friend, the artwork in general is awesome. I like that this concept is being an entire race here. the idea of a nature spirit or a dryad is cool but making a race of these plant people and giving them plant like features, like leaves for hair is something i feel gets overlooked. detail is so important and you dont disappoint.     Im curious if there is kind of a stigma on them. do people hunt them hoping to find rare botanicals?

A very good question and something I didn't consider. I would say no because of the small amount of fruit they bear it wouldn't be worth poaching, but it is an interesting idea. Did you read their creation story? I'm curious if you feel it's a bit too much to have both a creation story and a dossier.