I fear that after traveling the world I understand it less than ever! The endeavor revealed to me more questions than answers. I ought to give it another go sometime.
— Captain Amaya Pneuma


Amaya Sariel Pneuma is best remembered for leading the first recorded around-the-world voyage. This feat earned her renown among the peoples of the Quassus Continent, especially when such a voyage was deemed impossible in a shattered world. However, Amaya was not daunted by the prospects of facing Magic Fields and Magic Storms on the high seas. Her insatiable curiosity had driven her to undertake the dangerous voyage despite the dangers (one of which claimed her right eye). Her skill and charisma are often credited for guiding the ship and crew of the Marigold Apace.   Amaya took pride in her accomplishments, was vexed when confronted with failure, and held herself and her crew to high standards as captain. It was said that she was so particular about the readiness of the Marigold Apace before her great voyage that some frustrated crewmen left. Amaya is said to have been pleased by that development and with the new replacements thereafter.   She was well educated if her broad vocabulary in speech is any indication. The many books she read undoubtedly played a key role in not only igniting her curiosity as well as sharpening it. That is to say, she not only had questions but seemed to always know which one she wanted to answer the most.


Amaya's ambitious around-the-world voyage took almost three years to complete, but those years had not been wasted. Amaya and her expedition brought back a tremendous value of exotic items and artifacts. Items included strange keys, items imbued with dangerous magic, unique armaments, gems, metals, and spices.   Most importantly, Amaya's expedition brought back hitherto inconceivable knowledge of the world beyond the shores of Quassus. Knowledge that is preserved in journals, recovered texts, runes and more. Captain Amaya's Journal is the most well known record of the expedition, and it played an important role in igniting the passions of The Archivists Guild.   There was a cost to obtain this knowledge. Several members of the expedition were lost, and Amaya had received some scars herself. One of the expedition's ships was lost as well. All in all, it would seem to be some miracle that the journal survived intact.   Despite the wealth and comfort Amaya gained by trading her discoveries, she desired to take to the high seas once more. In 1167AGC, settling what business she could at home, Amaya set sail for discovery once more. Amaya never returned. In 1168AGC, Amaya Pneuma was officially presumed to be lost at sea.


The return of Amaya and her expedition left quite the impression upon the citizens of the Free City of Centrum. Little time had passed before dramatic interpretations of Amaya's Voyage began to circulate around the city. Fame combined with fortune allowed her to amass enough wealth to establish two lasting legacies.

Sea of Fortune
The first is her family trading business, the Sea of Fortune Company, a guild that specializes in the acquisition and trading of knowledge. This business survives to this day under the leadership of Amaya's adopted daughter, Asra Pneuma, ready to offer their valuable assets to those who need it.
Archivists Guild
The second was funding the founding of the The Archivists Guild. The knowledge she brought back fascinated Taenya Naïlo and Grau Quillblade, both of whom had known Amaya in earlier years. Grau Quillblade was Amaya's tutor, and Taenya was her mentor. When Taenya and Grau shared their plans for the guild, including the repurposing of the Eustacia Archive, Amaya insisted on providing funding to the fledgling organization.

Preferred Armament Custom made rapier sword, a pistol, and a pair of daggers. 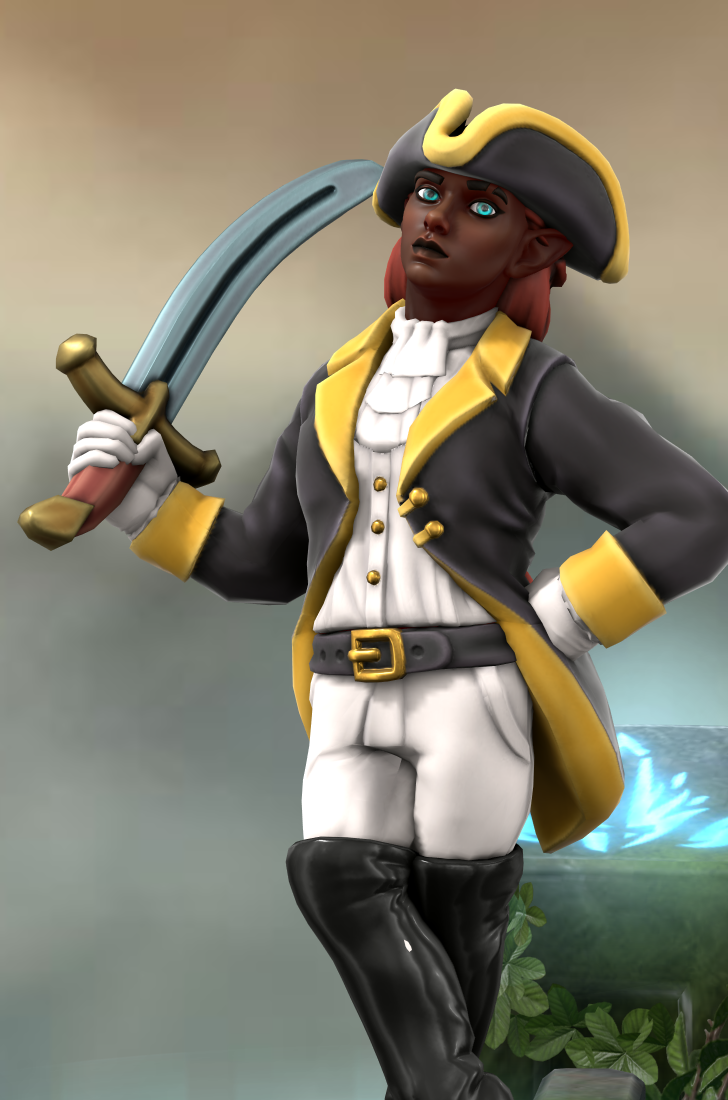 
There's a common myth which states that Amaya is still alive to this day. Exactly how is a matter of debate.   Some say she has become some kind of undead pirate. Others believe she has been cursed to travel only the seas and was forbidden from setting foot on land.   Still others claim that she had finally set foot on the Edellä Sky Archipelago, but was banned from returning home.   If there's truth to any of this, it is quite difficult to discern from the rest of the fantastical fiction.


Amaya carried with her an unusual weapon- a pistol. This was recent invention in her time, and it is not clear how she obtained it. Usually, highly proficient artificers or nobles had the means could acquire such an item to say nothing of also having training. Gunpowder arms such as pistols, while potentially devastating to any opponent, are not known for consistent reliability.
She grew up learning to use it with her right hand. She learned how to aim with her left hand and eye on account of losing her right eye while traveling the Ancient Crater. Learning how to overcome the loss of depth perception was also a skill she had to learn and which applied to many other aspects of her life at sea.
Pneuma's Expedition Around the World

Our Taenya and Quillblade were tutors of Amaya? I don't know what to do with that information. - Archivist Enna

This character was originally named Amaya Quickwind, but she has been renamed to Amaya Pneuma.