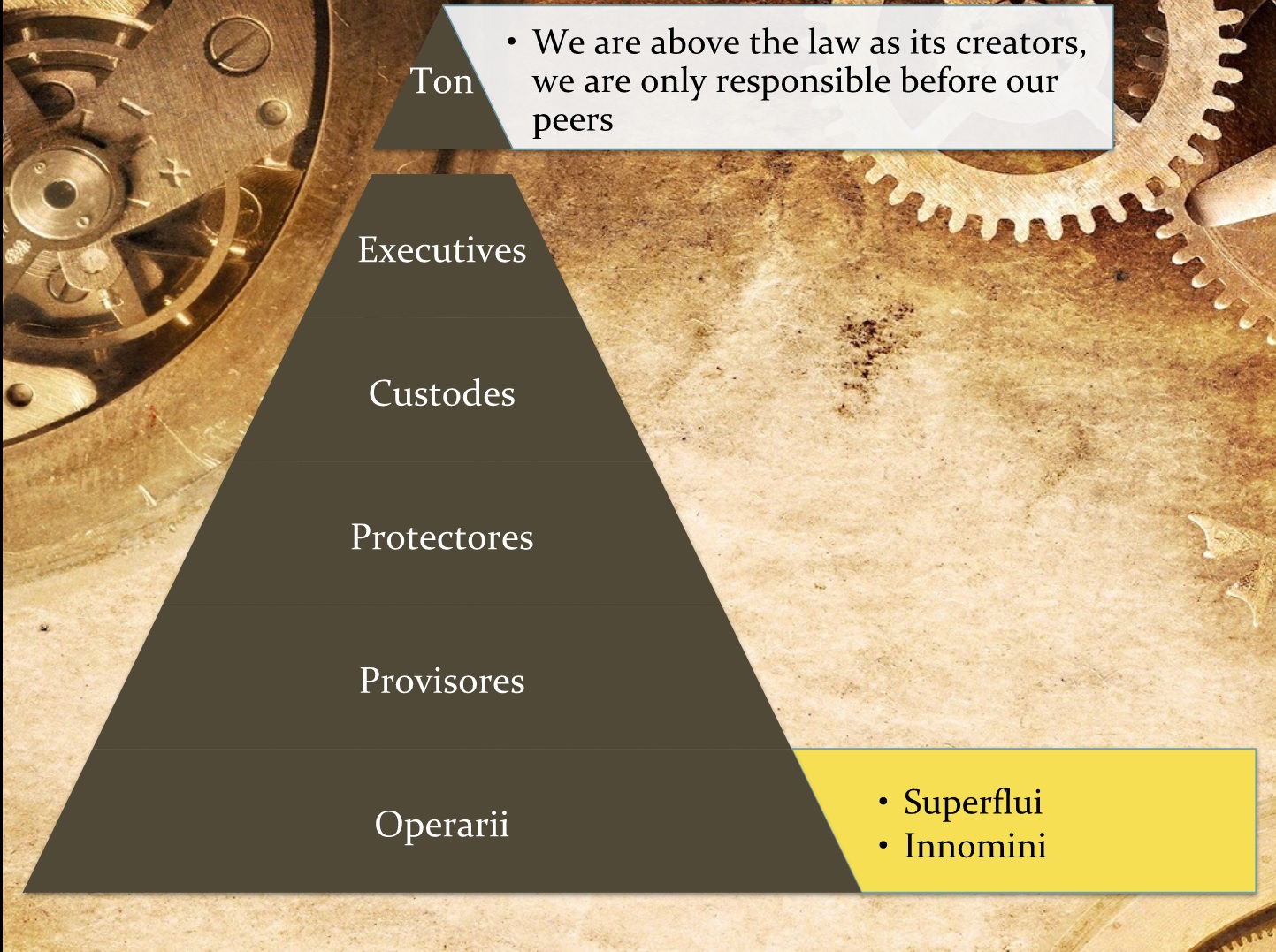 The Society of Atlantis is divided into three groups.
Sociocracy was inspired by Plato's ideal state ruled by the thinkers. Members of the first thirteen Familiae of Atlantis had been interested in pursuit of both knowledge and wisdom, so it had been them who established The Ton, caste of philosophers. They were responsible for creating the Rules of the Society that ensured progress and prosperity for all civii. Both the Societas and the Operativa consisted of the descendants of the Ton's companions on the journey and of the settlers from the second and third waves. The Familiae of the Societas decided to divide into castes with different responsibilities. They were The Executiva, The Custodes, The Protectores, and The Provisores. Together they ensured that the Rules of Society were obeyed and actually worked towards progress and prosperity for all civii. As no state can exist, not to mention prosper, without production, The Operativa were creating goods and provisions for the well-being of all.
As it has been established, these three groups were co-dependent. The Ton secured social justice so that no group would be oppressed, but could as easily reduce freedoms in the name of well-being. The Societas could influence Ton to execute or prevent changes ; they could also execute control over Operativa as they oversaw the transfer of means. And the Operativa could either further the development of the Atlantis, or stop progress by refusing to work towards the greater good.
Naturally, there was no human community that consisted only of the perfect people. The ones who were ill, disabled, or unable to adhere to the Rules of Society were taken care of by the Society, provided they adhered to the Rules. And the Rules dictated they were to live in the community centers where all their needs would be seen to.
The ones who consciously broke the Rules were disgraced. However, the Society always hoped for their redemption and more often than not Familia of the Ton or of the Societas vouched for them and in return, the disgraced Innomini swore fealty to the Familia, until their debt to Society was paid. Of course, in some cases that would be unacceptable by the Society and those Innomini - who usually commited crimes - were also institutionalised.
There were also cases, when the familial occupation was problematic. If a member of the Operativa wanted to work outside of his Caste, he was actually in the simplest situation. They could always seek occupation as Curator. Then, more often than not, they're encouraged to work alongside members of the Familia. Familiae members needed to truly consider their options and discuss them with their Headships. If they managed to obtain permission, they were signed as a Socius of other Familia, either higher or lower in status.
The only truly problematic situation is when a member of the Ton or the Societas wishes to work as Operativa. It breaks the one of the unmovables Rules of the Society (despite many attempts never amended as it's basically impossible to convince over 60% of the Society that's a good idea). Usually they try to use a loophole and claim their job is only a hobby and not their major occupation. Two of the most notable examples are Anthony de Stark (who is a certified blacksmith claiming he just needs to be able to make working prototypes) and Steven de Rogers (painter, but it's only unprofessional hobby; so what that he had several exhibitions). In some cases when they just want to work physically without denouncing the Familia (always possible, but difficult and so much of a hassle they were only 6 cases in the history of Atlantis), they either find a way to make it work within the Familia or associated Familia Provisora (learn the skill that's the basis for the trade) or risk everything by working in hiding.
NB. Slavery in Atlantis
There is no slavery in Atlantis. When the Dutch tried to establish trade connections, they offered slaves. The Atlantans promptly bought them and freed them, even offering ships to let them sail back to Africa, most of the Africans stayed in Atlantis (see Familia de Rhodes).