Everyone knew what that mark was, what it meant. Janos said we ought to stay anyway and play rough, that they couldn't be as bad as the stories said. Next day, he came back and told us just what would happen if we didn't do as we were told, but it wasn't Janos. Not anymore. Just a walking bag of dead meat, with the ribcage cut open. That's all the warning I'll need.

Cannibals who eat the flesh of their victims and devour their very thoughts. Mystics, criminals and fiends. The Corpse-Walkers is a well-known and feared criminal syndicate consisting of an inner circle of occultists who use black magic and terrible rites to impose their will upon the cities where they nest.   More then one debtor had been visited by a slain relative to be reminded of their obligations. Rival of the Corpse-Walker are summoned from a shallow grave to serve the will of their killer.   The Corpse-Walkers use power and fear to pursue their goals. Beyond just coin or power, the masters of the syndicate peer into the deep darkness and are ever searching for... Something. Whether or not they are the hunter or the hunted remains to be seen. 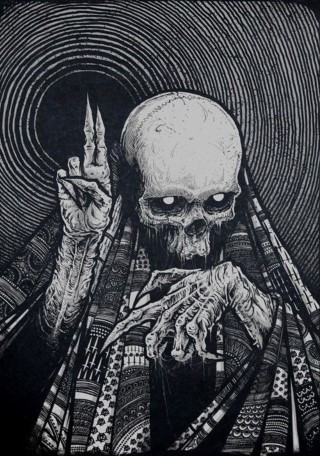 The Corpse-Walkers fall into three groups: the powerful inner circle that hold the power over life and death, the enforcers and criminals who do their dirty work, and finally the tributaries who are still more use to them alive then dead. 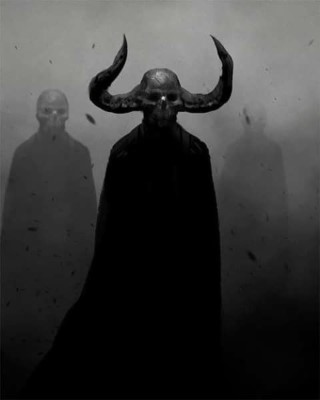 by Gabriel Verdon
The true nature of the Circle is shrouded in mystery and few ever meet a true master of the Corpse-Walkers. They are all referred to by the same title of Exterreri and none seem to stand above the other. When they meet with others outside the Circle, it is almost always through a possessed corpse and in person they are covered by elaborate, unique skull-masks.   There are believed to be between twenty and thirty members of the Inner Circle so far, spread unevenly throughout the cities they claim as their turf. None but the Exterreri themselves know how another would join their ranks and the event is rare enough to garnet significant attention throughout the organization when one is elevated to join them.
The Exterreri are the absolute masters of the Corpse-Walkers and control vast domains of the criminal landscape, each with their own preference and unknown goal. How they arbitrate among themselves is unknown.   Though few in number, the control they exercise is total. They wield fear as a weapon and tool, subjugating others to do their will and fill their coffers with grisly, morbid displays of their occult might.

Below the Exterreri are everyone else. Hustlers, thugs, enforcers and con-men who all pay due and homage up the chain of command. The cast bulk of the Corpse-Walker consists of there average men and women who by luck or temperament have been drawn into a life of crime. None possess the powers of the Exterreri above them, but they are usually happy to act the part. Skulls and bones are frequent adornments of a Corpse-Walker Enforcer, used to present the threat of death and the power that all know and fear the Corpse-Walker for.   The exact organization of the rank and file is simple: there is one leader (often called a Skull) who command a small group of criminals (called Bones) in his or her designated area. The Corpse-Walkers engage in every kind of criminality that will turn a profit and the Exterreri never seem to care exactly where their coin come from as long as it continues to arrive.

Tributaries are those not directly related to or under the syndicate's organization but still fall under their sway. Many of these are not even criminal, but business owners and officials who answer to the Corpse-Walkers for fear of their lives. These outnumber even the rank and file, as the syndicate often enough does not even have to commit the crimes themselves to profit from them but simply tax those who do. Fear does the rest.

The most dangerous of the Corpse-Walker vast bulk of scum are the Reapers: handpicked enforcers of the Exterreri's will and gifted with strange and terrible powers.   These men and women function as trouble-shooters for the Inner Circle, or provide might above the normal to a struggling group of Bones.   The appearance of a Reaper is rarely good news for anyone and if some particularly stubborn Tributary refuses to be cowed, the Reapers show them that the Corpse-Walkers are far from simple, empty threats. 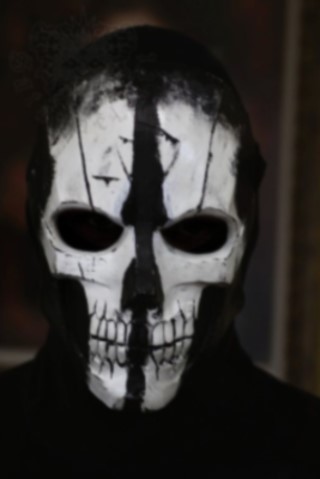 No one knows from where the Exterreri of the Inner Circle came from or how they came to grasp the power to puppeteer corpses, but it is known that they began to show in the trade-city of Mharaji. A combination of arcane might and clever theatrical ploy saw them quickly expand their power over the low-lives who already lived in the city and from there to extort businesses throughout the shaft-city. Magistrates were intimidated or co-opted, and to this day Mharaji is one of the syndicate's strongholds.

She is always watching   The greatest nemesis of the Corpse-Walker and one of the few credited with having slain Exterreri is the eternal Shrike, the deathless vigilante whose exploit have become legendary ever since her days of battling Corpse-Walkers.
— Read about the Shrike

From there, the Corpse-Walker have spread slowly and deliberately through the lower Inner Shell. They have shown no interest in the Outer Shell or Surface so far, but a marked tendency to grasp for cities that have access to or are trade-hubs for the Far Deep.   Ultimately, only the Inner Circle themselves know what it is they seek in death and dark. The wise and careful do not pry into their business, least they end up serving them: dead or alive.

The dreaded rulers of a criminal syndicate.

The dreaded rulers of a criminal syndicate.

Join Araea Discord!
This article has no secrets.

Thanks for the feedback! I gave it a pass, trying to scale the pictures down and around the some size. Does that look better? :)

Ooh, I love this, the opening is so chilling and makes me want to read more! I would suggest putting the images in a column to help shrink them to keep them manageable, or maybe put them beside the text via the side bar to help flesh out the page. But otherwise wonderful imagery, they seem like a chilling group!

Thanks! I'm glad you liked them!   How does it look now? I scaled the pictures down.

You're welcome! It looks so much better! : D Good job!

Very nice. This has a very good nice presentation and I really enjoy the concept of manipulating corpses to terrorize, feels legit something that would happen if it were possible. The art really brings it to life. Typo I suspect: "The appearance of Reaper" ... "of a Reaper"? All in all, a well-done article.

Thanks for pointing it out! I'll fix it :)   I'm glad you enjoyed the read! Magic in this world is often strange, terrible and only partially known, so I hoped to showcase that.

As people may suspect by now, I have a fondness for the dark and morbid as well. :D

I love the occult syndicate vibe I get off of this article. I also like how it's written and how intriguingly mysterious the inner circle is.

Thank you! Anything missing, y'reckon?   I wanted to make something in the dark occult themed, with a secret agenda. This was the mad-scramble result! :D

Hmm. I think the article is good as it is. This may not belong in your article depending on how you want to organize your content but i'm curious to know where this organization stands in the world specifically. Is it local or worldwide? Who are it's major rivals? How much sway do they have, is it simply intimidating business owners?

Those are great ideas and I will strive to fill those details out at some point today! Thanks!

"Today" didn't happen (I blame the other prompts!) but it's definitely on my to-do list to fill out some details and especially rivals. I'll get to it, promise! :D

Amazing work Qurilion! This is so well made and you really got me hooked with the first quote, the shivers!

Thank you! :D   I'm really glad yo hear you enjoyed them! I figure I would come back to them now after Camp and kind of clean it up a bit.. Haha. So let me know if there's anything else that you want to see!

Once again, you have taken one thing and built upon it, creating an interesting “what if?” Scenario.