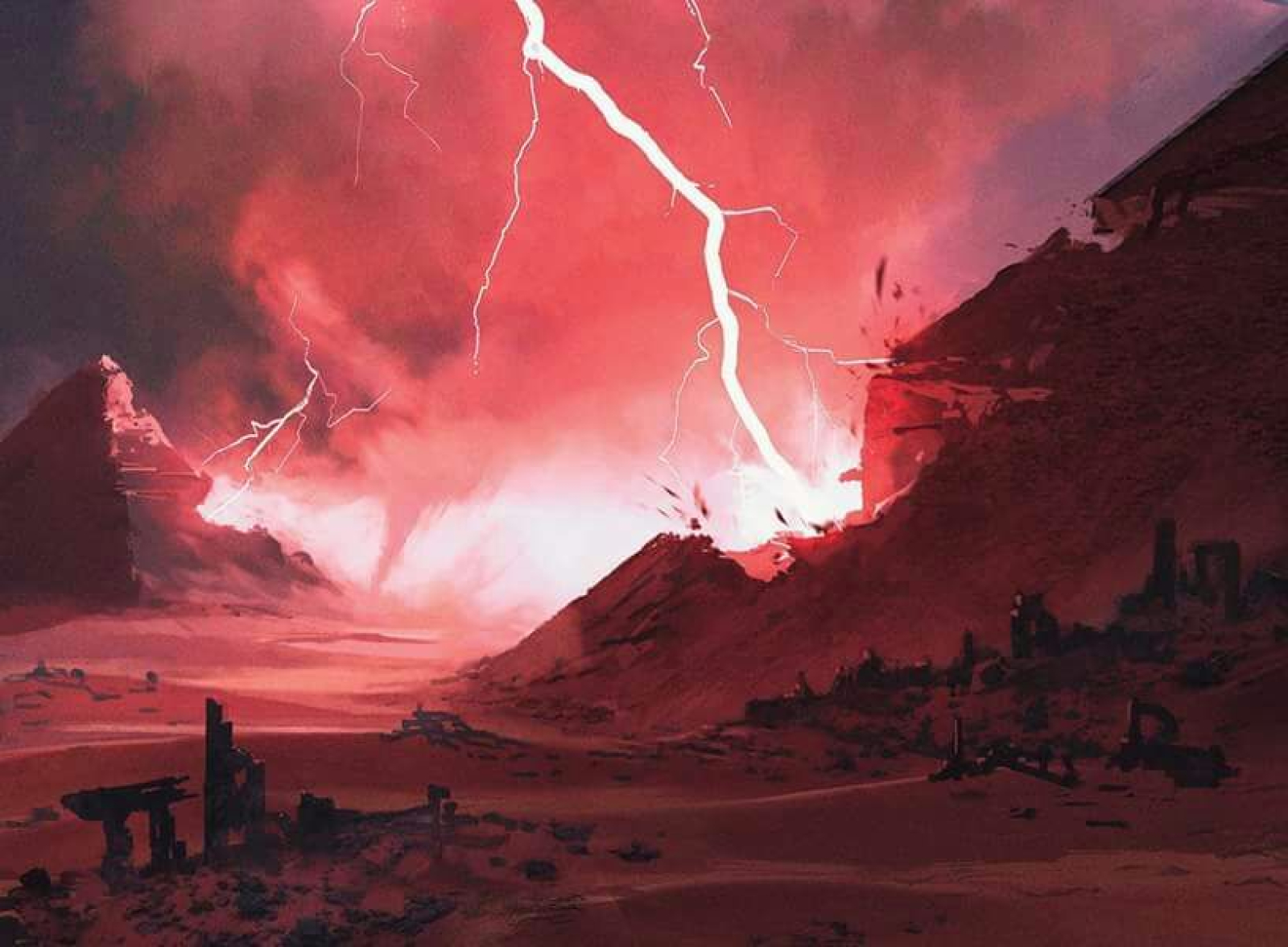 Lightning can strike more than twice, if you aren't careful.
— Senchai, Blight-Tracker

Sparklights are living bolts of lightning, Surface spirits born from cosmic thunderstorms. When the stars are right and lightning strikes the surface of Araea, it survives to become a Sparklight. These beings hop across the landscape in wild revelry of speed and power.   Every Sparklight begin the fade from the moment of their birth and only by seeking out sources of power can they prolong their existence.

Sparklights are bolts of lightning, crackling with power. They range in color all the way from blinding white to deep purple or blood red, their hue changing and twisting as they absorb other sources of power - or the circumstance of their birth. Young Sparklights are always painfully bright, with those spawned during Season of Storms crackling with a multitude of warping hues of color.
Always in motion, Sparklights hop and bounce around constantly. A newly born Sparklight are difficult to follow and even to look at, leaving terrible marks in the ground where they land. As the Sparklights fade, their color and brightness bleed away.   Their constant movement slow to a leisurely pace, becoming shorter and lower, until they cease to rise again. Those that survive are changed by the energies they consumed, shifting in color or transforming entirely. 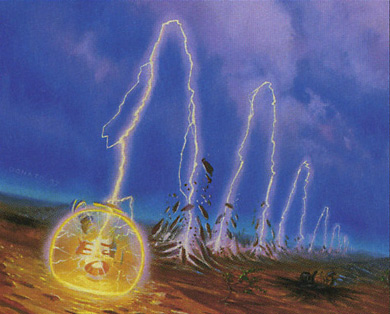 by Donato Giancola
Some become jagged and angry, or crystalline-looking bolts of mutating energy. Others become bloated, lazy things, that float like bubbles of soup before crashing like a hammer blow to the earth.

Ancient Sparklights are sometimes so warped from decades or even centuries of mutating consumption that they are barely recognizable.

Those who feed from the enigmatic Q'x become particularly complex beings, like a multitude of competing colors shimmering within the same physical space. While most Sparklights are doomed to slowly diminish until there is little left by a feeble, sputtering spark, some few manage to grow ancient and vast. The impact of these Sparklights could be mistaken for the impact of meteorites, were it not for the rings of burning crystals they leave behind.

Eternally at motion, Sparklights are hunting spirits - always searching for energy to consume so their dance can continue. Such power sources are far and few between. Lightning storms and similar powerful weather can feed Sparklights for a time, making them particularly common in areas like the Howling Plains. In the rare case where the Sparklight has encountered other spirits, they have proven able and willing to hunt and consume them. Sparklights can consume each other, engaging in dazzling hopping duels that leave the landscape around them a scorched, shattered mess. The victorious Sparklight with absorb the loser into itself and grow stronger. 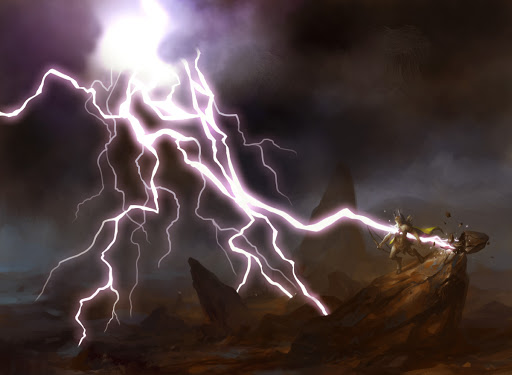 by Daarken
Sparklights are ceaselessly moving and travel with the long, arcing leaps. There are few forces in Araea that can compel a Sparklight to stop and they can bounce up the side of a mountain or sheer cliff as easily as if it were plain ground.   They move with great speed and crash into the ground with shattering impact. The speed and momentum of a Sparklight is directly in proportion to how much it has consumed.


A Sparklight's leap can take them from a few dozen yards over the ground to over a mile by particularly well-fed specimen.

As far as spirits go, Sparklights are not particularly aggressive towards humanity. Some have even exhibited what could almost be described as a playful nature, bouncing around groups of explorers or trailing after them as if curious. Like all Spirits, Sparklights either ignore or can't comprehend human attempts to communicate with them. Even a friendly Sparklight is a dangerous hazard, as they don't understand the fragile nature of their playmates. For most Sparklights, the interest is fleeting and they soon continue their hunt. Humans, for the most part, are not prey.

At birth, Sparklights are simple and single-minded creatures, concerned with little more than their next leap. Like a newly born animal, fresh Sparklights often exhibit a lack of exact control of their movement and will frequently bounce around like an unsteady drunk. As they grow and gain control over their movement, most Sparklight soon begin to hunt for other sources of power to stave off their own demise. As a Sparklight age, their sharp light dims and their speed begin to decrease. Close to their death, Sparklights become almost translucent   Most Sparklights are born during the Season of Storms, when Araea is shrouded in celestial gloom and terrible storms. The lightning that cracks the heaven and earth sometimes linger, becoming Sparklights, but exactly when and why can only be guessed.


Sparks from the Stars

What could be so bad you'd want to escape down to here?
— Senchai, Blight-Tracker

As Surface spirits, Sparklights are rarely encountered by most. Among the settlements on the Surface, Sparklights are dangerous and terrifying creature; a errant leap can bring a Sparklight into the heart of a market and leave houses, people and property in ruins. The Exiled sometimes worship the Sparklights as avatars of the gods, deadly predators sent to Araea to consume and destroy. Sparklights are just as heedless of such worship as they are any other mortal concern.
Thaumaturgy forms the only exception. Using Thaumaturgy draws Sparklights at some indeterminable distance and doing it in view of one is sure to invite a ravenous strike from hungry Spirits. These encounters usually end poorly for the Thaumaturg, with the Sparklights essence well outside the Thaumaturgs' ability to touch with their magic.   Blades and arrows fare little better. Sparklights are nearly impervious to all injury, susceptible to trauma only at a vast scale. 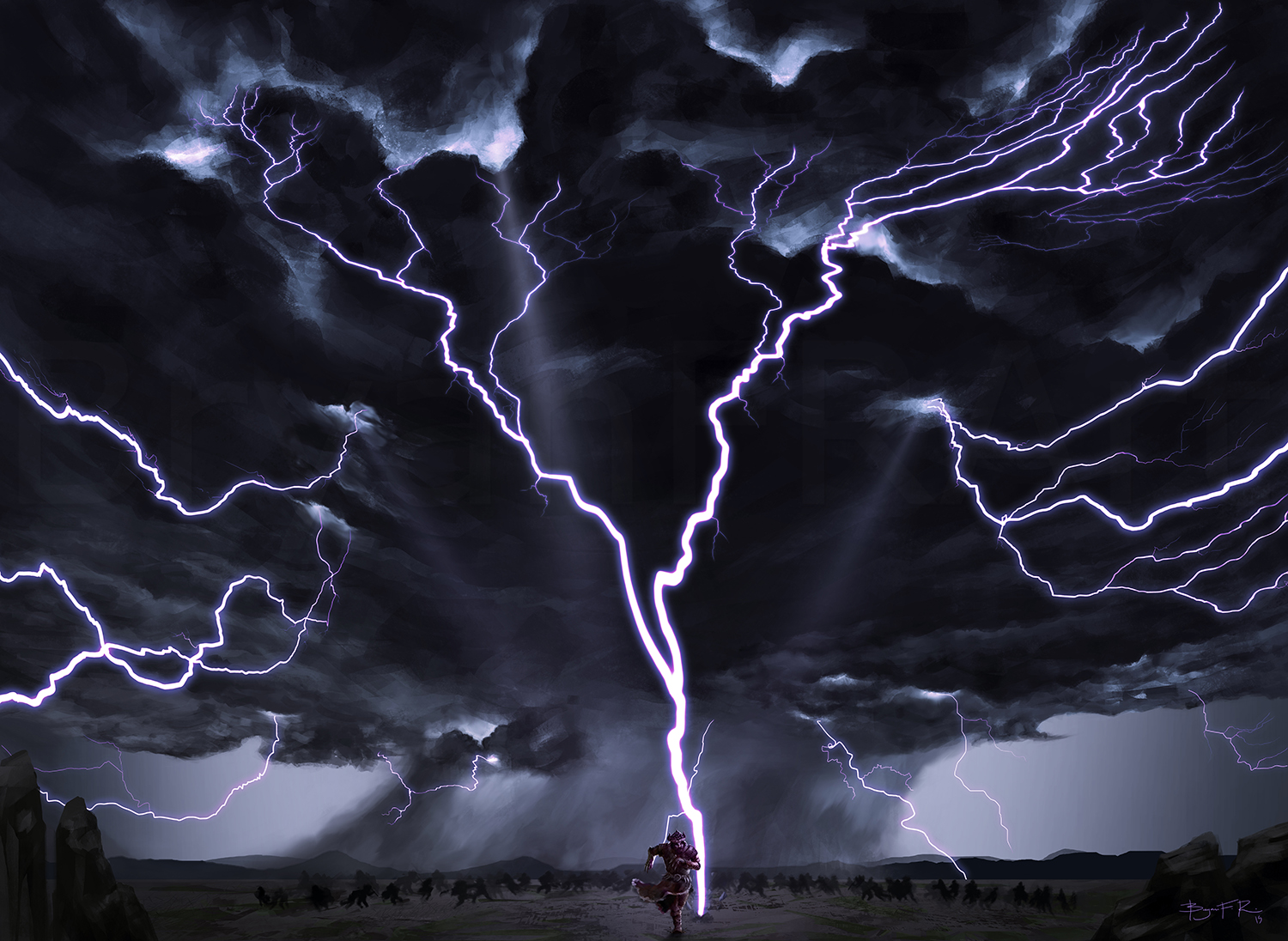 Spirits   Impossible and unknowable, Spirits are strange and magical beings. Many of them never enter the physical world but lurk beyond it. Few ever see a Spirit fully manifested and fewer still live to talk about it.   On the Surface, spirits are rare and seldom encountered, but Sparklights are one of the more widely spread Spirits.   Read More About Spirits

Sparklights leave more than mere physical scars on the ground. While young and pure Spirits only break the ground, ancient one change it. They burn the earth as they strike it, leaving small craters lined with living crystals, or small star-spawned worms that evaporate slowly.   Star-Chaser sometimes bring these things back to Araea, where they become anything from pricey curiosities to highly sought-after materials.

Some especially foolish Chasers sometimes try to catch the Sparklights themselves in a variety of ill-fated contraptions.   The fortunate never come close enough to try - the unfortunate do. 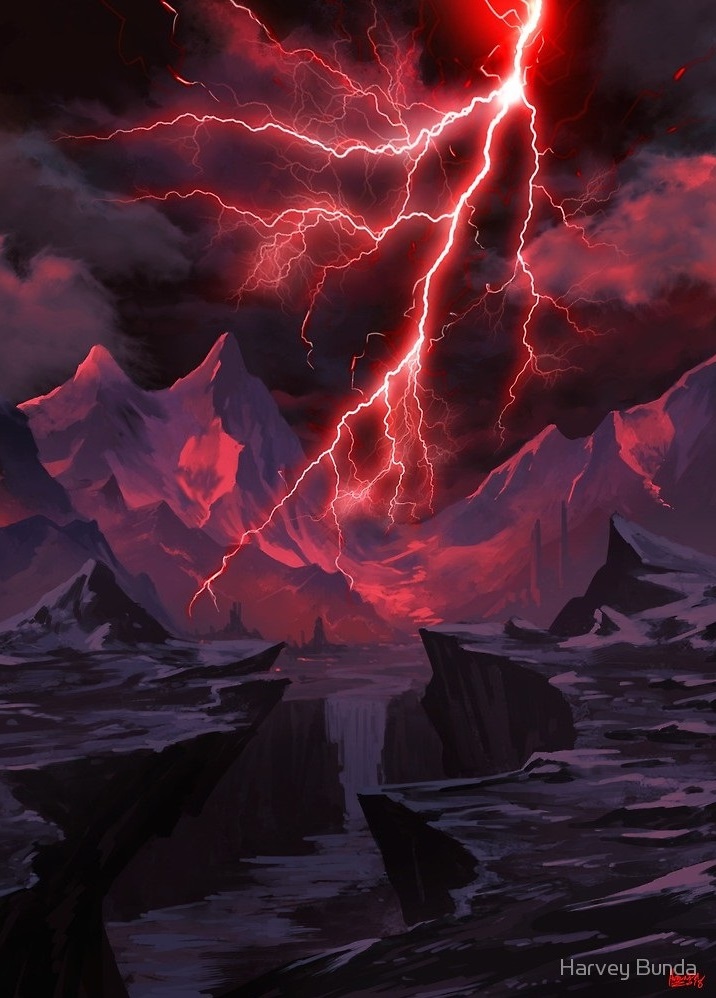 The Sparklight are especially common in the heart of the Howling Plain, a region of the Surface wracked by near constant storms. Here, the Sparklights survive on the eternal thunderstorms and engage in vicious, cannibalistic duels among the gale-winds and frozen glaciers.   Read More About The Howling Plains 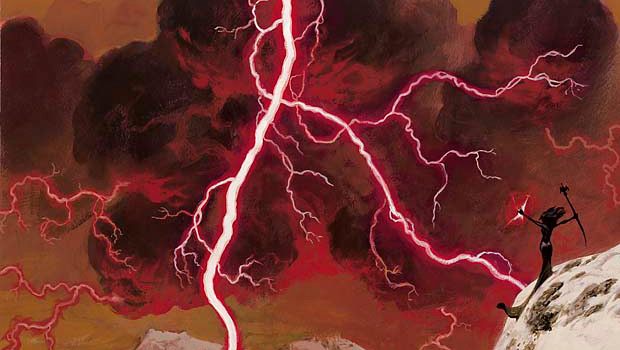 
Among those who dwell on the Surface, lighting is always an ill-omen. It is the sign of the heaven's temper and it is never good.   Travelers wear charms of shaped glass to help ward off lighting-strike and when such inevitable fail, clever tricksters blame Sparklights spirits. 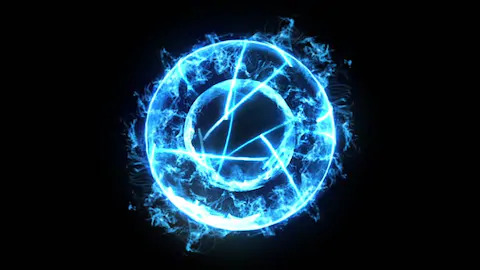 by Yrid
Some whisper that she has even bent Sparklights to her will, using them to hunt those who displease her.   Most avoid the Lady, though wise Blight-Trackers often seek her out for either guidance or to offer tribute when they journey through the Howling Plains.

The Q'x attract Sparklights, who delight in drinking their strange energies.   Such feasts often have unintended side-effects, mutating the Sparklight and even imbuing them with strange new sentience.

When Sparklights draw near, the wise hide where they can. Given no reason to care, the Sparklight never do and leave as quickly as they came.

Some think that Sparklights were not sent by any angry god, but crashed to the earth to escape the hungry void of stars.

While the sparklights are truly terrifying. I found Lady of the Lightning-Spire more intriguing - I want to know more about her

Agreed! She sounds fascinating and I want to know more!   I also have to admit, when I got to the part of your article about how humans aren't prey, my exact thought was "Well, that makes one creature on Araea not trying to eat everyone."

Until you use magic anyone near them. But yeah, there's that! :D

Coming soon! :3   Or at least at some point. She's been with the setting since way back and even then people wanted more Lightning-Lad so it might be time to give it a go! :D

The newly born sparklights sound oddly... adorable. This article is fantastic, I'm a big fan of these things! I'd be one of those idiots trying and failing to communicate with a sparklite in an effort to make one my friend/companion :P

Haha, thank you so much :D   Unfortunately, Spirits are pretty alien and hard to communicate. Their view on the world is just based on a completely different set of parameters. Maybe one day!   Thank you so much for reading and commenting <3

I love them! They're so...inhuman and in...animalistic? Anyway—they're so unlike other beings, feeling like a mysterious force of nature more than sentient life.

A really good description of Spirits in Araea, actually. :D   Thank you <3