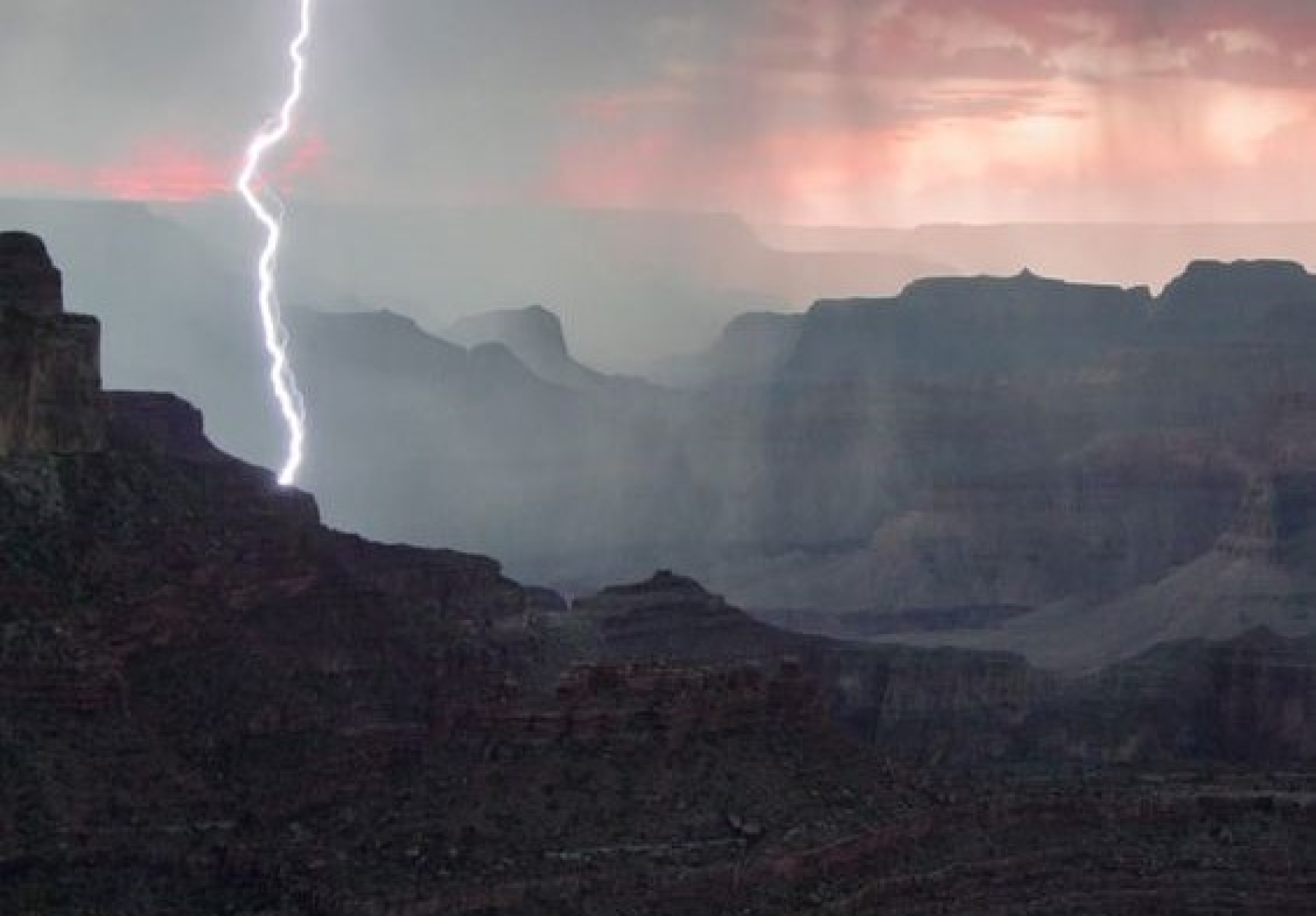 When the land itself is screaming at you, it might be time to go somewhere else.
— Sencha, Blight-Tracker

The Howling Plains is a vast stretch of line along the equator of the Surface wracked by mile-long sand and storms. It is from the winds of these storms that the region gets its name as they scream down the vast, dusty expanse. In some primordial time, it may have been an ocean but now only a barren desert remains, scarred with fissures, craters and the bones of those slain by the storms. Even in this forsaken place, greed finds a way to lure people to brave the land when the storms are in lull. 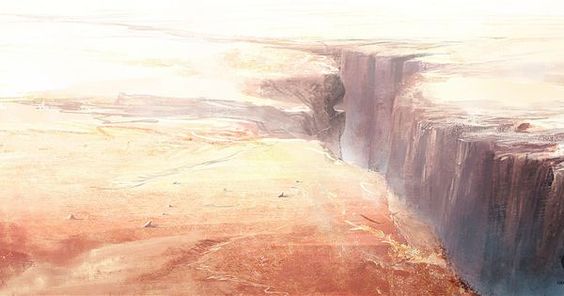 Most of the Plains are open and relatively flat, with anything the hills and cliffs being ground down and carried away by the storms. Deep ravines and fissures provide the only shelter from the winds for explorer and animal alike, and gash the desert floor at regular intervals. While most are covered by dust and soil before long, some craters are deep enough to survive. Every so often, another star will fall from the heavens and create another short-lived sanctuary in the plains.

Beyond a few places that defy the winds, most of the region consist of the plains. The ground is barren and cracked, with dust everywhere. At any given time, there is almost certainly a storm somewhere on the plains and they can span many miles and blot the sun out from the sky. Outside of that, there is little to shelter the land below from the sun's rays and temperatures at day can reach scorching heat.

In some places of the Plains, closer to slowly disintegrating glaciers or neighboring regions, the dust and winds are sometimes joined by lightning and thunder. Some well-traveled explorer claim they know where in the region they are based on the voice of the storm.

There's a way in and there's a way out; just be sure to be on time.
— Sencha, Blight-Tracker

The Road is a shifting path through the near-constant storms of the Howling Plains, changing with the seasons. Despite the unpredictable patterns, the Road is by far the safest way to reach deeper into the plains if one knows how to follow it. Knowing the Road is an hard-won art form, with only a few landmarks that those travelling on it can rely on. There is always a danger of a freak change bringing the storm closer than comfort and travelers always need to be wary.   Despite the dangers, it is the path most take when they wish to seek gold or glory deep within the Howling Plains. Blight-trackers who know the routes often lead seasonal expeditions down the winding road and back out again once they've concluded their business. Due to the seasonal nature of the Road, it is best not to linger and risk the Road closing.

The Burrows are a name for the collective few settlements of the Plains. Mostly inhabited by hunters, prospectors and explorers, the Burrows are dug deep down into the fissures where they can avoid the winds and blight. The Burrows are established along the Road or towards its very end and occupied during seasons when the winds calm. All but a skeleton crew leave again when the storm begins a new and the cycle repeats next season.

Just when you think this place can't get any worse.
— Sencha, Blight-Tracker

Deep within the Howling plains and enduring the constant winds, the Thundercloud Mountains completely enclose an area of wet, cold land. The Much of the land is frozen and the storm here is eternal, bombarding the land with lightning. The same thunder clouds shield the area from the sun and douse it in gloom. The life here has adapted to some of the most dangerous environments in Araea, feeding on lightning and living inside dens made of ice. Explorers who have visited the place speak of troves of rare minerals and have brought back the carcass of creatures seen nowhere else, but most do not return. 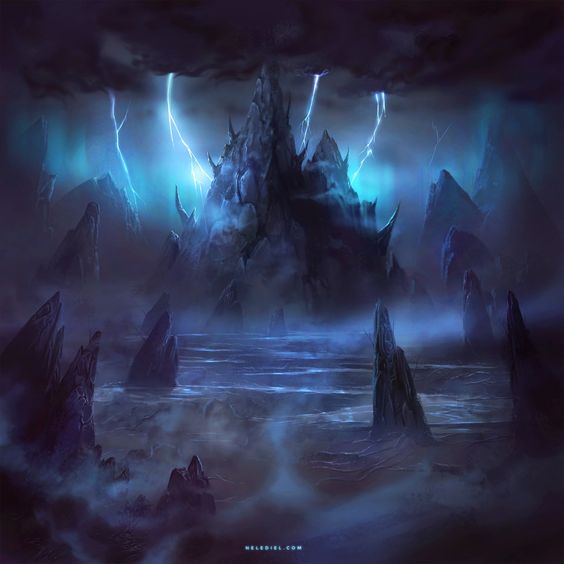 Life is rare in the Howling Plains. The broken, dry plains are devoid of water and nearly all vegetation, providing little for life to cling on to. It is in the fissures and ravines where waters pool and beasts gather. These being are almost all tough, thick-skinned creatures that can survive the razor winds and Blighted dust. Those who aren't burrow so deep into the ground that neither can touch them, coming up only to scavenge off of those less fortunate.

by Rock Cafe.info
The only plant that survives in the plains are a stubborn, rock-like lichen that feast on the sun and sleep when it is shrouded. Hard-shelled barnacles grow along the edges of the fissures and red algae claims some of the glaciers of the Thundercloud Mountain as their home.

Hunters and explorers alike report finding bones that dwarf them, deep in the Howling Plans. Some think they belong to the legendary Mahu'ca; others hope so, least something even worse has made a home among the shifting winds.

Humanity and the Howling Plains

I've heard there's a fortune out there, just waiting to be found!
— Every naive fortune-seeker

Despite the dangers, the Howling Plains is not without its visitors. Hunters seek the creatures who live here: their hides, carapace or plate are some of the toughest known and excellent (and expensive) material to make armor with. The meat is sold for food, while horns and organs are believed to hold value as potent medicine or powerful charms. Others seek the rare lightning-glass or rare minerals among the plains. Much of the region is unexploited by industry.   Others are simply drawn by the unknown. The Road has only traveled so far into the Howling Plains and the vast expanse of it remain unexplored and unknown. No matter the danger, that lure will always beckon some.

Dangers of the Storm

The storms that shroud much of the Howling Plains at any given time is the most dangerous adversary for anyone seeking to explore the region. Especially fierce squalls are more than capable of knocking an explorer from their feet and small debris that fly with the winds can cut like razors.   Beyond the flaying winds and dangerous things that hunt inside the storm, the dust itself carries danger. It is Blighted and unwary explorers often succumb without understanding that the sand and dust coating them after a squall is their doom.   Others simply get hopelessly lost. Within the storm, there is almost no visibility and it is easy to get turned around. Without landmarks to guide them once the dust has settled, explorers no longer know which way they were going or which way they came from.

At least one Theurg has made the journey down the Road to seek power unlike any other. The Lady of the Lightning-Spire is an almost legendary figure among the hunters who live and hunt along the Road and in the Burrows, but only a handful claim to have met her. By all accounts, the determination that drove to seek the eternal storm of the Thundercloud Mountains and harness it for herself makes her a terrifying figure.


The Flayed Cult   Some feel the winds cut their flesh and feel the touch of redemption. The Flayed Cult is a small and strange group of explorers and Exiled who venerate the storms of the Howling Plain as a place of cleansing. The worthy will have his sins flayed from his flesh by the winds, or so they claim. For the most part, they are harmless to everyone but themselves.

Far from a uniform flat plain, centuries of storms have shaped the landscape of the region like a sculptor's hand. Eroding winds have worn away and smoothed the stone into flowing shapes and patterns. Some continue for miles, while others become a tangle almost immediately where the gale winds have been less predictable. 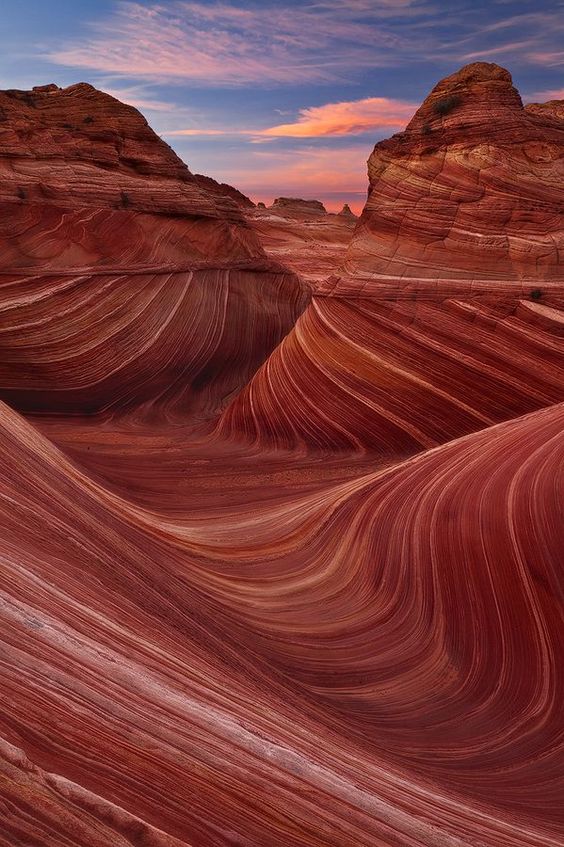 A fantastic read and great first World Ember Article. You work fast and well. What is Lightning glass? Also I love the legend of the lady, I hope I get to read more of that! What sort of Raw minerals are in the mountain if I may ask? I'm curious what the people of Araea find rare and useful.

I got real inspired! :D Thank you!   And I haven't decided in any real detail yet. And lightning glass is basically a fantasy variant of fulgurite, a mineral/glass that happens when lightning strikes sand (basically) :D   <3

I'll confess I'm here because at first I thought it was about howling plants lol. But I loved it anyway! It immediately reminded me of the Shattered Plains in the Stormlight Archive (by Brandon Sanderson), both for the "shape" of the plains and the huge storms. Was it an inspiration?   I liked the fact that you add many quotes. "Every naive fortune-seeker" made me chuckle for some reason. They do fit very well with the article content, so good job! On a related note, I feel like the layout can be improved. The sidebar is fine, but the main body... maybe place some of the images in columns?   What do you mean with that road thing? It "changes"? is it because explorers choose different paths depending or the season, or is it because the road is magical, similar to the Hogwarts stairs?   Great job!   (also, "placeholder bug" lol)

Howling Plants might be another article. LOL   I've not read the Stormlight Archive. My inspiration came more from Mars and the crazy, landscape-covering duststorm that goes on there.   I'll revisit some of the layout after WorldEmber, so I'll keep that in mind and consider it. I don't use columns a lot at all because I find them a bit awkward to read. But I'm certainly interested in hearing how the layout could be improved!   The road isn't a physical road, but more like a path through the storm where it isn't storming. It's shifting because the storms move around, so you can basically make your way between two real bad storms and be sort-of-certain they're never going to plow onto the path you're taking.   Thanks! :D

Ooooooo this was a well-written and interesting article! Definitely a dangerous place. I liked your use of imagery and quotes. I'm also curious about the Lady of the Lightning-Spire and would like to learn more about her.

Maybe I should make a character article about her. ^.^