Mag Mell - Realm of the Fae

Note: this article is a work in progress.
Mag Mell it is the realm of the fae, and it can only be entered via a few of existing gateway locations across Alana, with Makari being one of them. The realm is controlled by four major factions: Titania and her Summer Court, Oberon and his Winter Court, the Spider Queen and her Shadow Court, and Creiddylad and her Wild Hunt.   Titania and her Summer Court are the most powerful, followed by the Winter Court, the Shadow Court, and, ultimately, the Wild Hunt, which roams the entire realm looking for intruders and traces of Shadow Courts members, the three courts each encompass approximately one-third of the total land area of the realm. The land of the Summer Court and the Winter Court is each comprised of connected sections, whereas the land of the Shadow Court is consisting of isolated gloomy caves, the inside of gigantic dead trees, and small, difficult-to-reach patches of land. 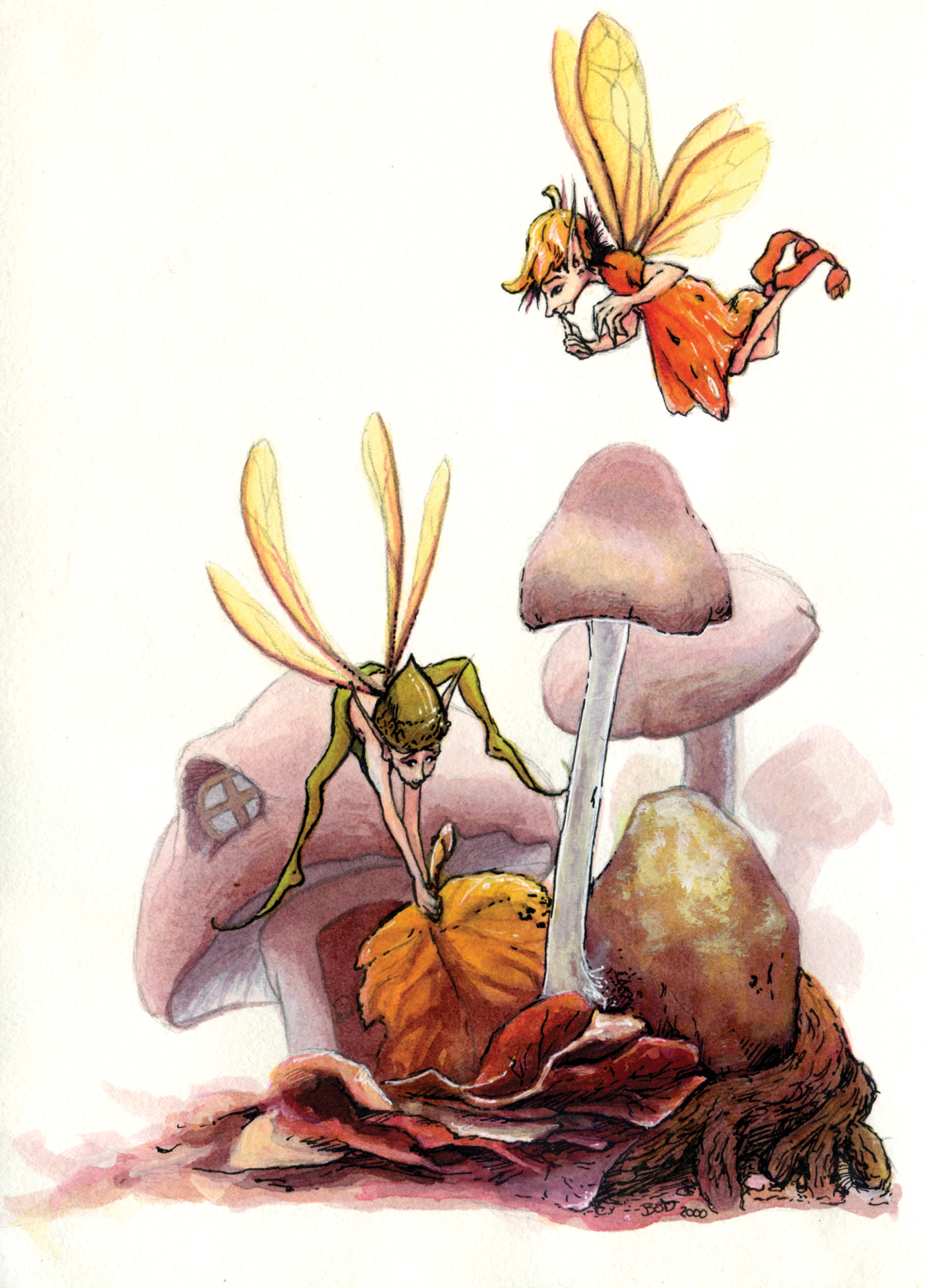 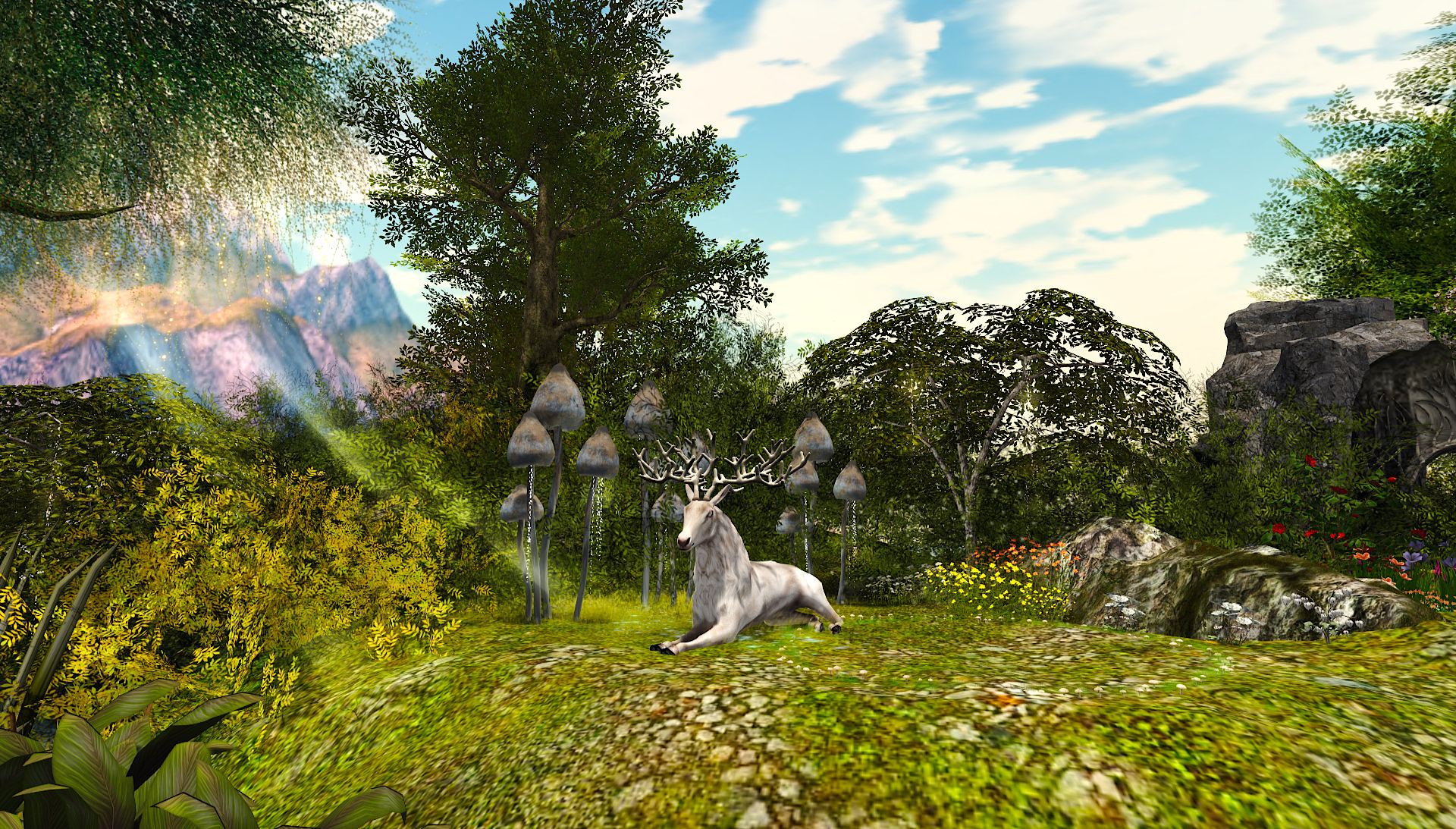 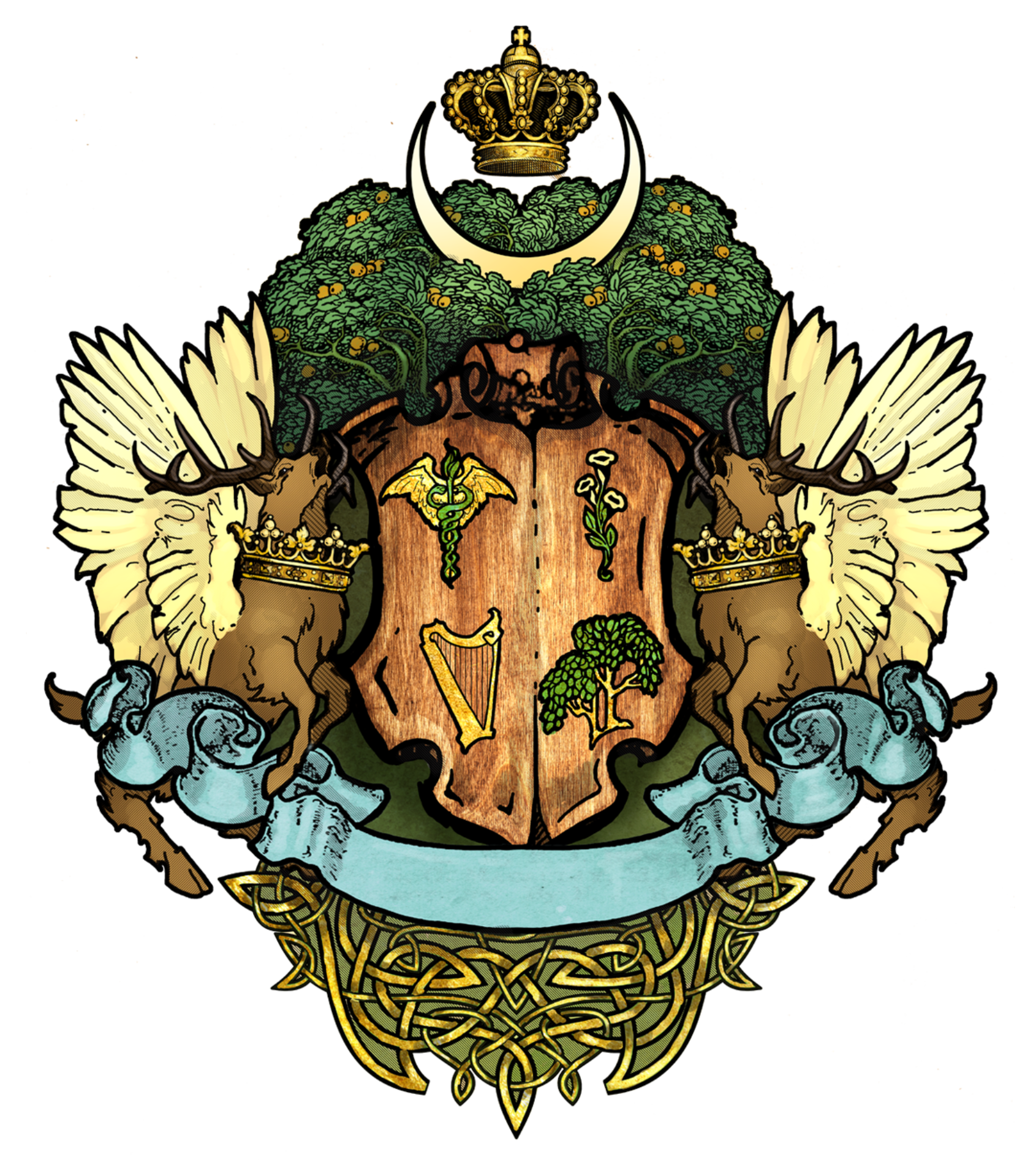 Crest by Bob Greyvenstein
Titania, Queen of the Fae, is the monarch of the Summer Court. No specific woman has been designated as Titania, and any fairy can claim the throne and become the new Titania by accepting the jewellery that comprises the power of the Queen.   The Court is based in and around the Glass Fortress, a massive crystal castle with a thousand towers and halls (so people say).   In addition to fairies, pixies, and gnomes, the Summer Court also includes sylphs, faebirds, pseudo dragons, and dazzloncats, among other creatures.   A Queen and a King of the Fae must constantly reign over their realm, or else the Spider Queen will seize control of the weakened land and plunge the realm into darkness.


The Winter Court is presided over by Oberon, the King of the Fae. Whoever succeeds to the throne must pick a new appearance in order to separate himself from his previous self. Oberon is also the protector of The Chief's Cauldron.   The Winter Court is comprised of treants, beastmen, and all kind of evil faeries, including bogeys, blurkers, grindlings, and spunkies.   The Court is housed in a castle located at the top of a mountain. There are countless passageways that weave their way through the mountain's innards and emerge in unexpected places all across the realm. 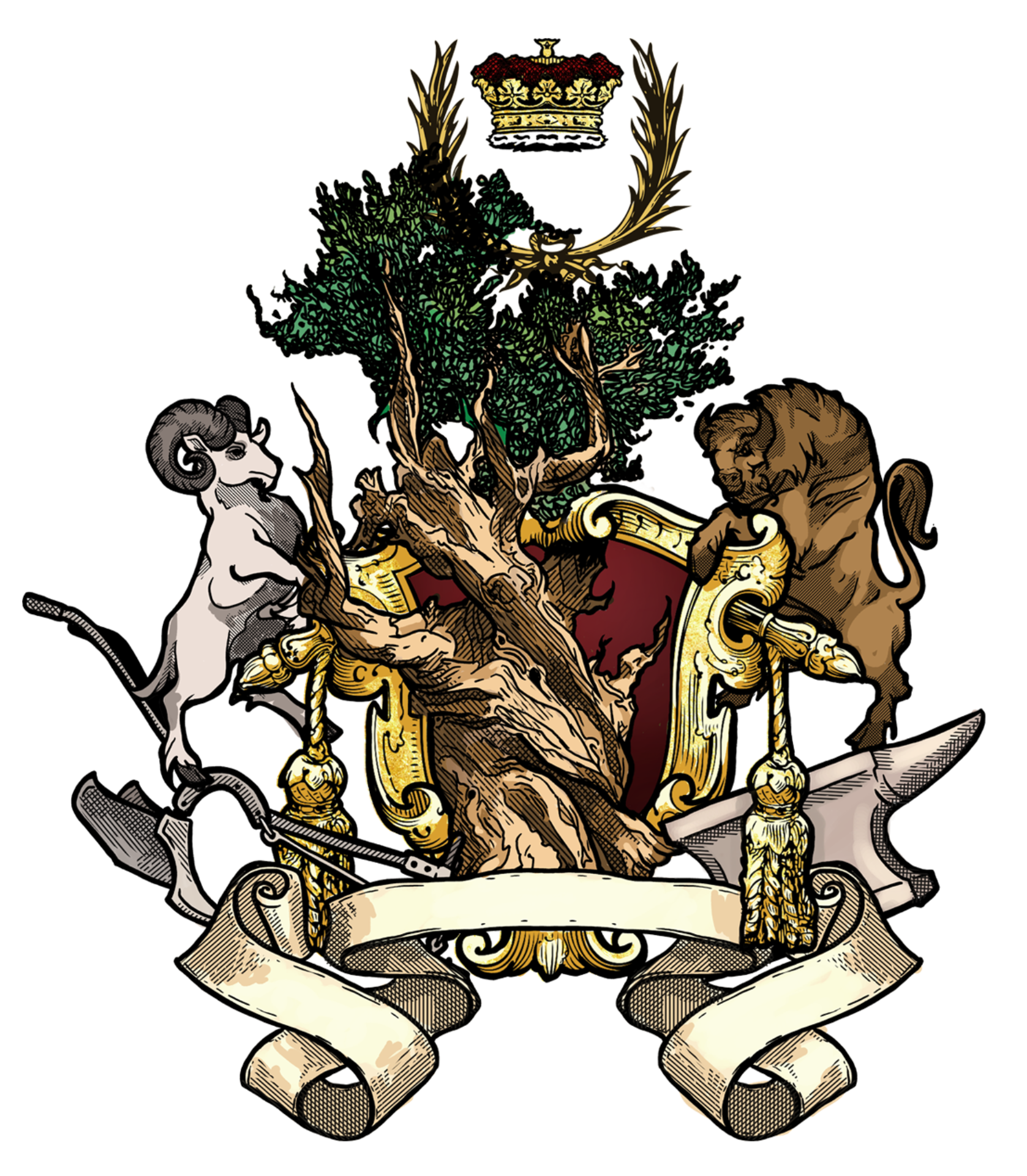 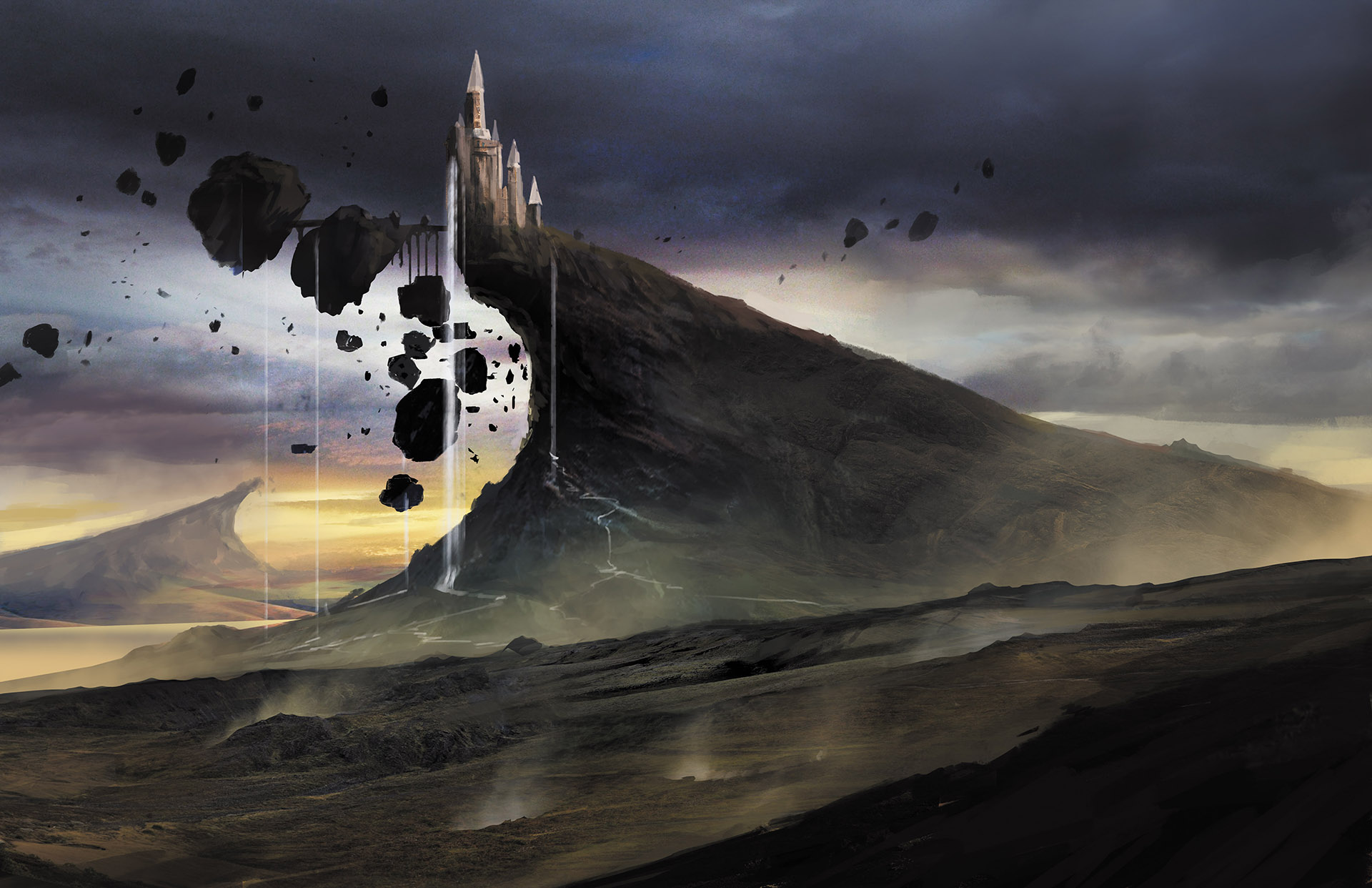 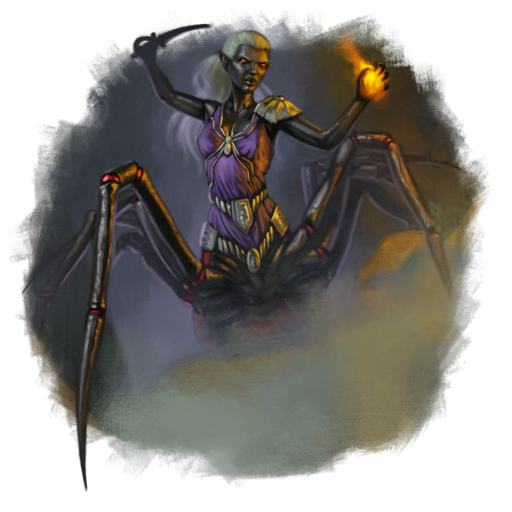 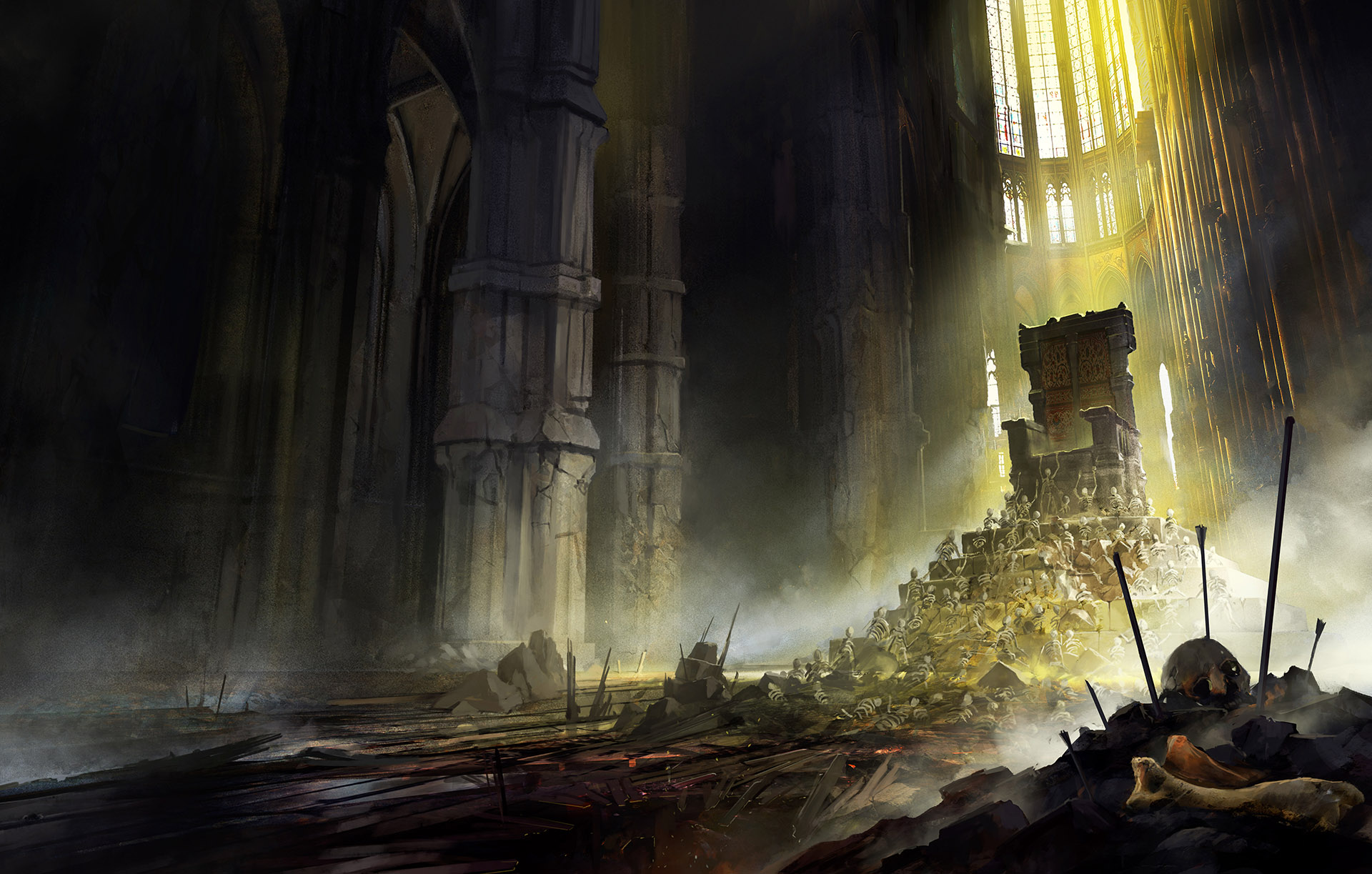 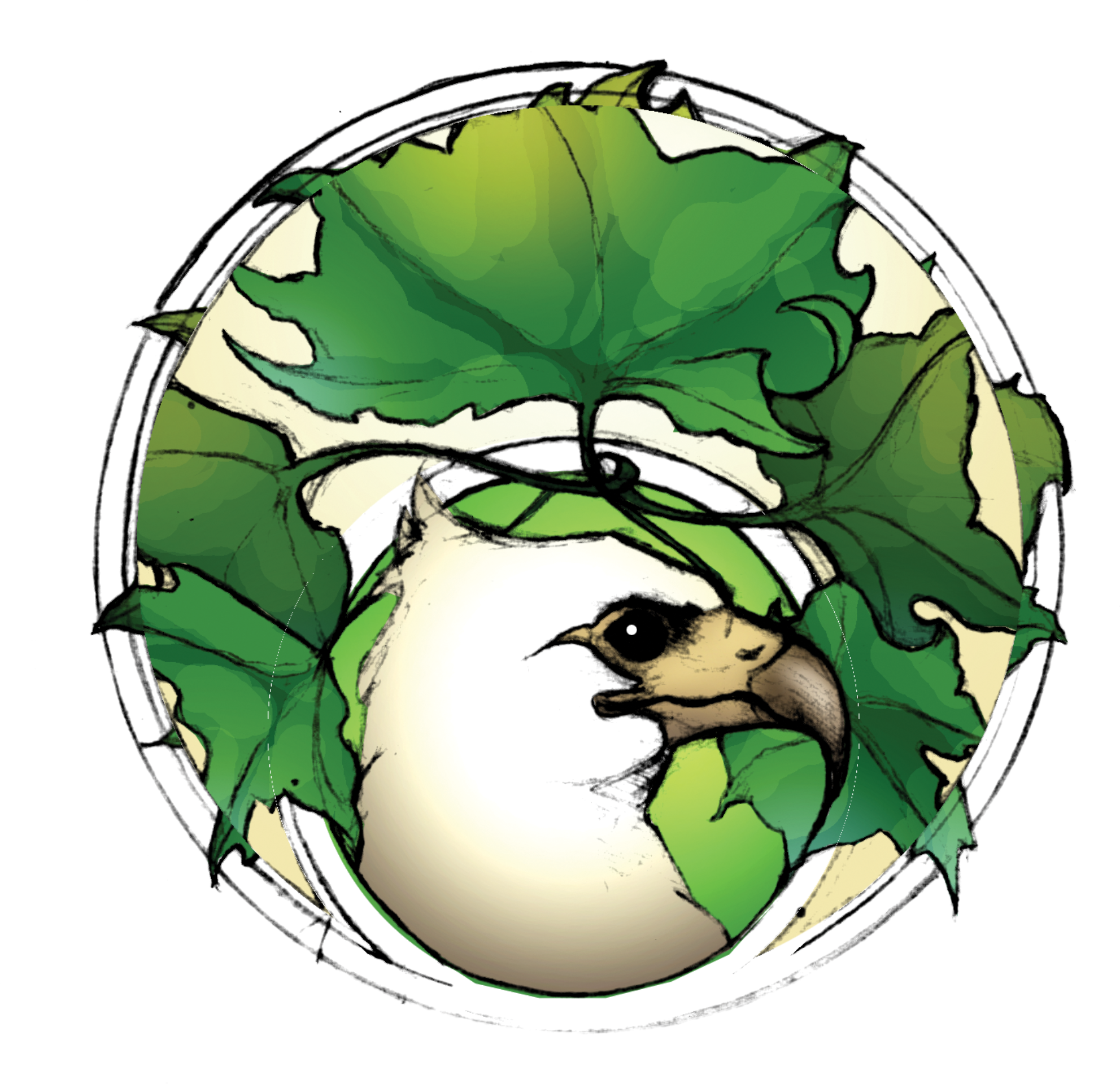 Crest by Bob Greyvenstein
The Wild Hunt is on the watch for anybody who tries to enter Mag Mell without first receiving an invitation from one of the reigning sovereigns.   There are a variety of hypotheses as to how the Wild Hunt came into being. There are some who believe that its members are outcast elves who have sought sanctuary in the fairy world. The elves of Alana, according to followers of a different theory, are the refugees who have been banished from the fairy world. A third school of thought holds that the Wild Hunt elves were brought into the fae world by either the Summer Court or the Winter Court, but that they were too different to properly fit in and so founded their own society.
There are three Wild Hunt settlements. Two of them are just tiny outposts that allow the tribe's members to travel easily throughout the whole realm. The third ones is a whole lot bigger and is located in the Winter Court's territory. The settlement is comprised of several rows of little dwellings that are attached to a group of ancient trees. Small bridges and rope ladders link the various parts of the structure. 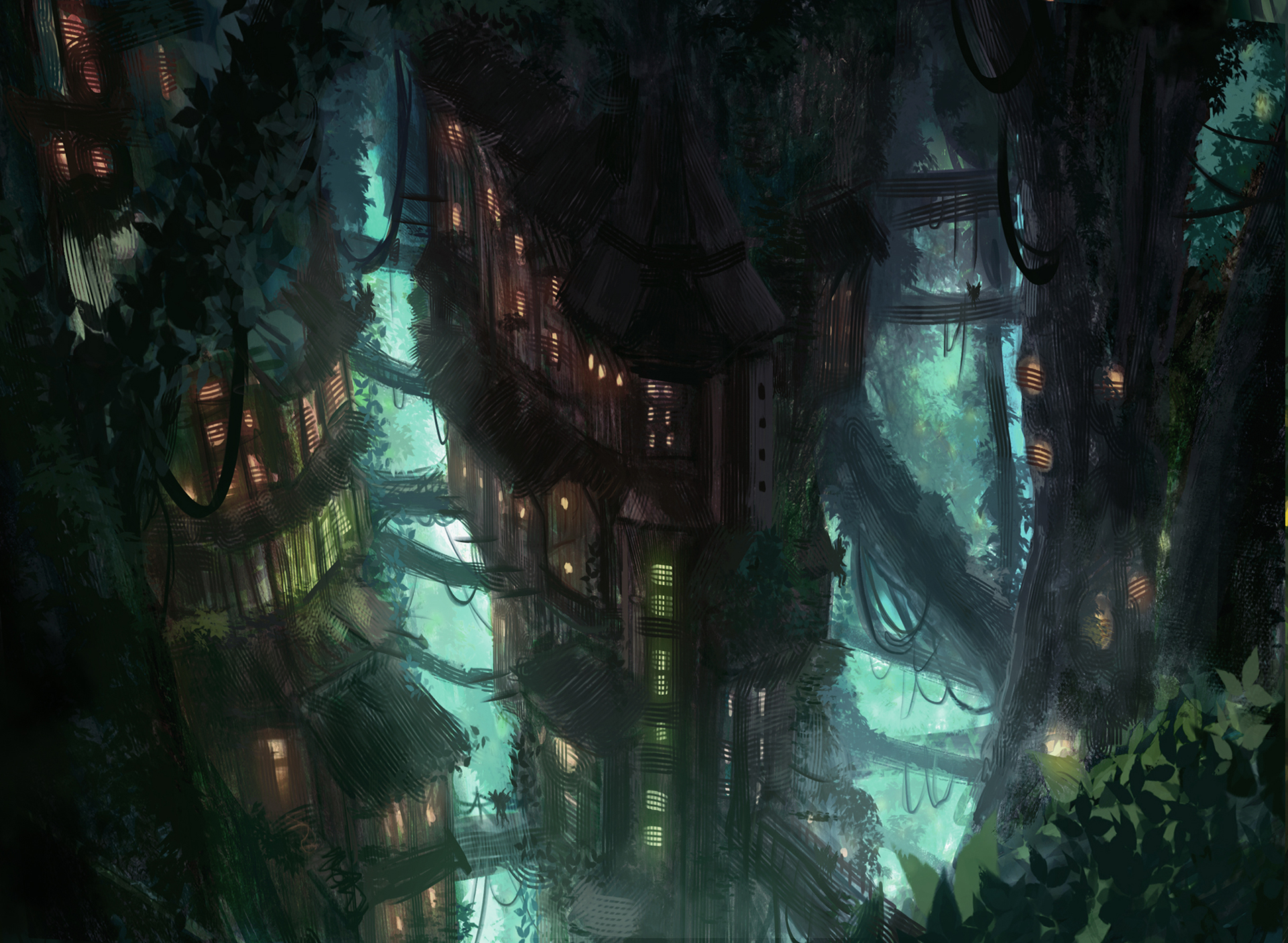 Tree Town by b-design
Creiddylad is the daughter of Belimar and the head of the Wild Hunt. She is also known as the black faced huntress. Heydere and Oweyme, the two most powerful warriors in the tribe, are in a competition with each other, each attempting to acquire more Wild Hunt followers than the other in order to be the first choice when Creiddylad ultimately decides on a partner.

A few unique characters are living in the Realm of the Fae, outside of the Courts. 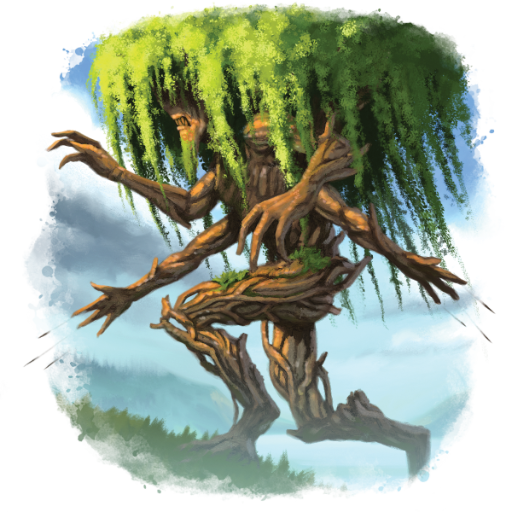 Treant by Dean Spencer
Detrius is a colossal treant who goes about his business with little regard for the courts. He despises outsiders as much as he despises noise, therefore if there is any disturbance in his immediate vicinity, he will go and try to put an end to it. He is, nevertheless, a fan of gleaming jewellery, and if the opportunity to acquire more of it presents itself, he will take advantage of it. When asked about the realm, the courts, or the Wild Hunt, he will provide information, including some secret sites in trade for jewels, which he would then hang from his branches, which are jingling from the weight of chains and rings.
Ludger is a humanoid badger that may be seen sitting on a tiny wooden table in front of the cave where he resides, sipping tea and nibbling cookies.. He is a pleasant person who offers tea to everyone who goes by and asks for small favours in exchange for his services. To thank you, he will provide you with very approximate instructions to the various spots across the Fae Realm. 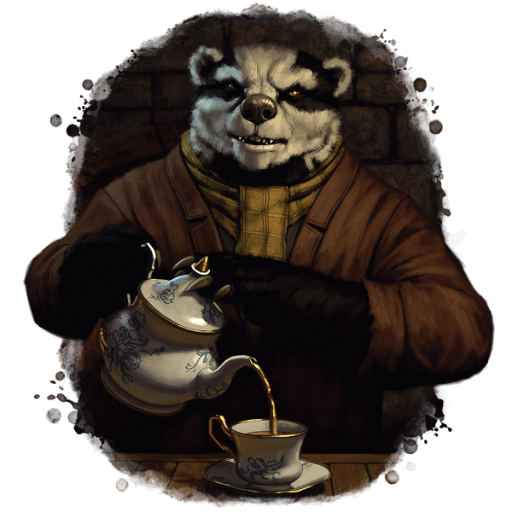 Badger by Dean Spencer
He will enlist the assistance of others in a slew of time-consuming and exhausting tasks, such as weeding his tiny tea plantation, cleaning up his cave, clearing boulders and fallen branches from the region around his cave, catching some fish in a nearby pond, and so forth. The rewards for doing so are almost usually insignificant.

Mag Mell is covered in extensive forests, wetlands, glades, ponds, and a mountain range, which makes it a very beautiful place to visit. In fact, you may walk for days without leaving the location you are in because of the nature of this realm and the powers of its residents. Everything appears to be changing all the time, and a glade that was bathed in sunlight just a second before may now be a gloomy and dark area.   There is a connection between the forests in the city state of Makari and a forest in Mag Mell belonging to the Summer Court. 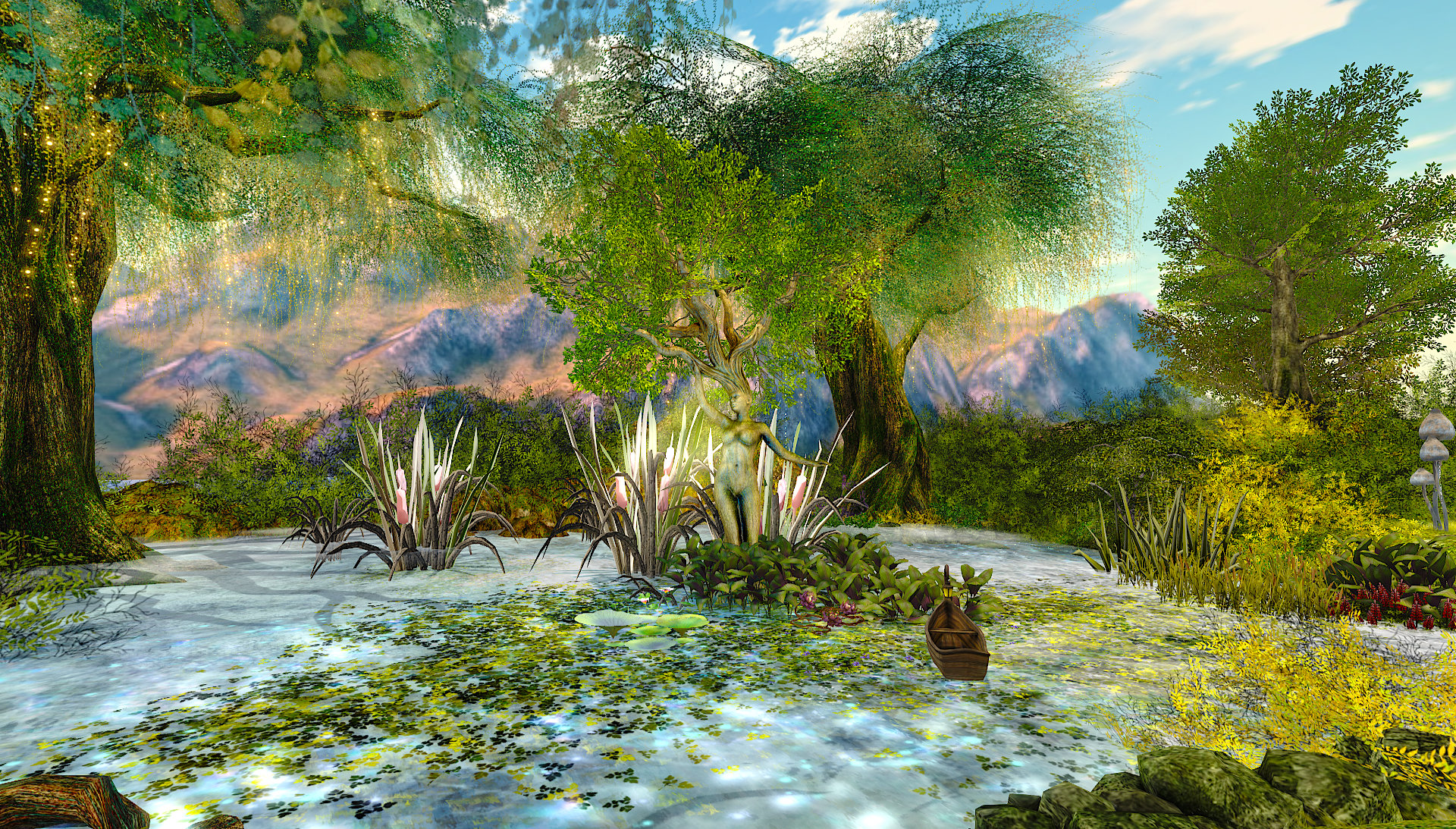 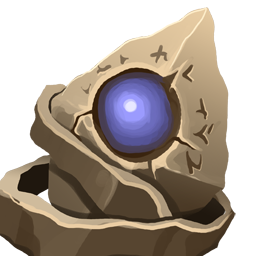 Photo-de-bombed - Members of the Perelline Society of Explorers and Finders of Ways are on the lookout for evidence of the existence of the Fae Realm and the denizens within it. They provide an apparatus that makes images of whatever is in front of it. The difficulty is that it takes 10 seconds to snap a photo. And no living entity in the Fae Realm ever remains motionless, not even for a moment. 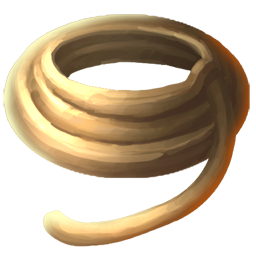 Sticky, so sticky - Margo Weedlebeam is looking for some sticky spiderweb threads for experiments she is planning. Someone needs to travel to the domain of the Spider Queen and bring back some of her threads. The party might want to get help from the Summer or Winter Court first.
I believe I can fly - Gnome Workshop has requested that you bring some magic fae dust to test whether it will enable you to fly.
Tuning in - As a wedding gift for her future husband, Brindle, the girlfriend of Elger the bard in Makari, has requested that a syrinx be created in the Fae Realm. It is necessary to locate a faun in the realm of Fae King Oberon, as well as to complete chores for the faun. 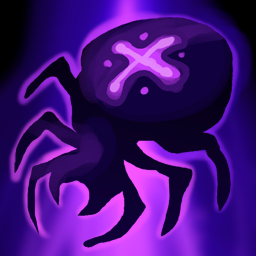 Mirror, mirror, ... - When one of the characters looks into a pond, she can see a desperate faery as a reflection instead of herself. It is necessary to dive into the pond and go through this pocket dimension in order to release the fairy, which has been trapped there by the Spider Queen's enchantment.

Magic Items of the Fae Realm

Note: Please keep in mind that rarity refers to objects that are only available within the fae world; they do not exist anywhere else. 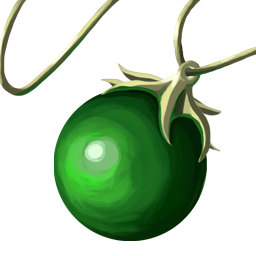 It is used by devotees of the Spider Queen to poison ponds or rivulets that are widely frequented by faefolk, and it is poisonous. When exposed to water, it turns into crystalline poison.
rare 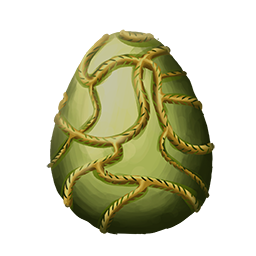 The Wild Hunt frequently employs this item in their operations. A boulder, which has been placed on the ground and is walked on, bursts as it is struck, forcing a sticky net to rise and wrap around the victim. Without assistance, escaping is extremely difficult. Fae sense helps to stay away from such traps.
common 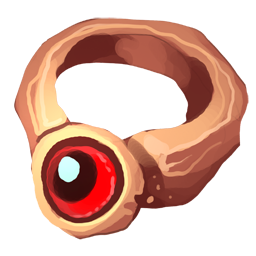 Currently, there are only a few copies of this item available. Those items are passed down by the King to dependable subjects who are sent on crucial missions in his name. The rings allow the King to keep an eye on what is going on and to pinpoint the exact position of the person who is wearing them.
very rare 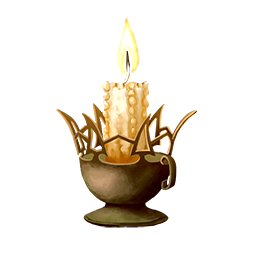 When this candle is lit, the Queen immediately has an understanding of the circumstance that is taking place at the time of the candle's illumination. She or one of her minions will then be able to emerge close to the candle without having to travel via one of the gateway locations.
unique


Species of the Fae Realm 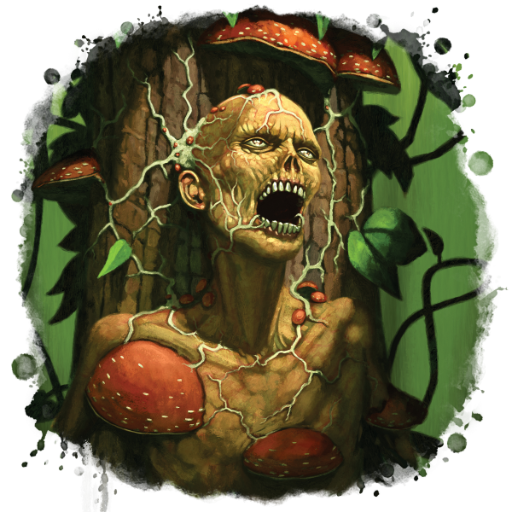 Carnivorous Tree by Dean Spencer
The death of numerous travellers who have reached the Realm of the Fae has been brought about by carnivorous trees. A fungus that lives on those trees has formed a symbiotic connection with them, allowing it to produce long strands of fibres that attach to the nerves of any living thing leaning or sitting on the tree, thereby paralysing it. The fungus then begins sucking blood from the tree, which it then shares with the tree. When the trees are cut, they flow scarlet sap. 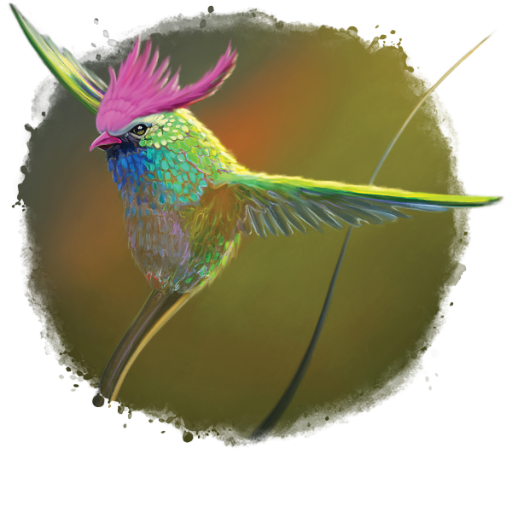 Faebird by Dean Spencer
Faebirds are little, brightly coloured birds that can fly incredibly quickly and linger in the same spot for long periods of time. If you are not familiar with this species, all you will see are flashing, rainbow-colored lights that are either standing motionless or zipping through the air. Once you have realized what they are, you can actually see the birds.
Locations

Click here for copyrights and used content / licenses / commissions / OGL   Content Usage: Do not copy! You are allowed to use my world's content while playing with your group,
you are not allowed to copy it and include it in your own products except when explicitely allowed by written permission from me.
Article template
Geographic Location
World
Alana
Category
Locations
Author
Tillerz
Publication Date
15 Dec, 2021
Creation Date
15 Dec, 2021
Last Update Date
1 Jan, 2022
Visibility
Public
Views
232
Favorites
27
Comments
3
Tags
fae we2021 featured mag mell

I'm glad the wild hunt get their own court, though would they have it if the shadow court weren't a threat? Also, Detrius seems almost more like a dragon than a treant.

Still someone needs to keep out/capture invaders, so the Wild Hunt would always be there. And Detrius, well, the dragon is a different one, I will add it later. :)

I am afraid of heights and the Wild Hunt settlement still makes me drool, I'd love to live there.

X-D I will write up a little bit for everything when things have settled down a bit. :)

Such a fun article Tillerz! I love the interesting courts and the added detail in the items.   It was so fun to read that I added it to my reading challenge ^^

And as the trees strip themselves from their leaves, letting them descend to earth, it becomes abundantly clear, WorldEmber is here.
Powered by World Anvil