Fosters in the Feywild

Describe the largest diaspora in your world. Why did they leave their homeland?

Once the Far Realm was defeated the elven peoples faced slow extinction. There weren't enough elven babies being born to replace the ones who died in war and elven lands were ripe for invasion by their faster breeding neighbors.

A million of our sons and daughters died in the void, trapped and helpless. They never even saw the moon they were trying to save. Has the time of our people come to an end? Are we fated to vanish into memory?

— Thirion, Elf-King on his death bed

The elven kingdoms jump started their populations by inviting half-elves and those with any elven blood to settle into the empty elven communities. They even extended invitations to any drow willing to make a life for themselves in the sunlight. But those efforts still weren't enough.

When the Orrery of Worlds began to stabilize the Kirinal Pit, the elves were the first to make bargains for the world of Erathia with extraplanar powers. They negotiated the Market Treaty with the Faerie Courts making Faerie the sixth day of the week in the new calendar.

The world's elves negotiated places for their children in quicktime areas of the Feywild. Elven infants born on Erathia could live out the hundred years of their childhood for a decade or even a few years. When they reached the age of majority at the physical age of 100 they come back to the world through the Market and begin their lives again in the mortal world.

A Childhood of Delight

The elves make sure that their children are born in the World, setting Erathia as their homeworld, ensuring that if the ever become lost in the dimensions that they will make their way to their proper home.

After their first birthday, they are taken to the Market on the day of Faerie and left with caretakers. They stay in the Manifest as it returns to Faerie and are taken to quicktime areas to enjoy carefree childhoods in well protected elven enclaves. They learn to sing and dance. They learn tales of their homeworld: the death of the goddess Thaya, the sacrifice of the First Armada, and the victory of the Second. 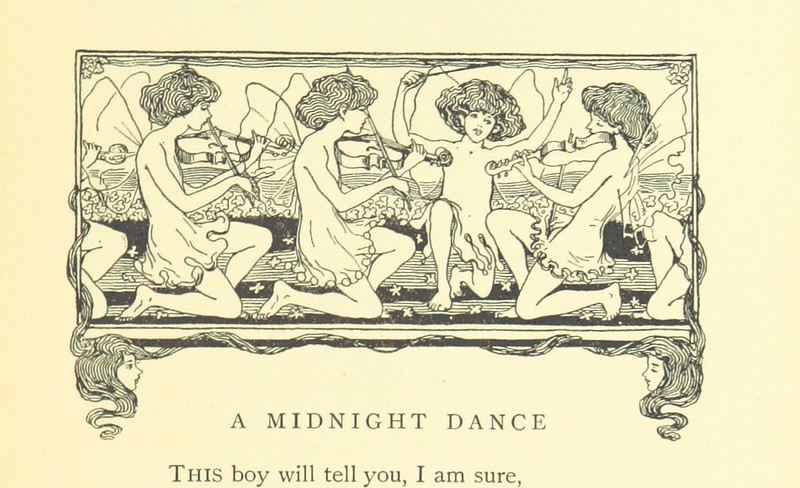 A Midnight Dance by H. Stratton
Elven children perform for the midnight dance.

When the children enter adolesence sometime in their physical 60's the youths are taken to camps where they learn the arts of war. They are taught to fight with sword, bow, and spell. They form close conections with their peers and they wonder about the parents they will meet again when they return to slow time and the mortal world.

Depending on which pocket of quicktime they were in, the infants return to the world as adult elves 5 to 10 years after they first entered the Market. Parents mourn the loss of their offspring's childhood, but they make the sacrifice proudly.

The returnees spend a year with ther families and engaging in the ritual of Cabed Maitulie, the "Return to the World". At this point, they choose or are given an adult name. Male elves go back to the Zone to report for duty at Menelost Telperion or Tol Acharn. Female elves are expected to have babies to revive the race.

The elves have come back from near extinction fiercer and with a renewed lust for life.

In the modern Zone, the mixed heritage of half-elves allows them to find their place anywhere.

Competition Homepage
In response to the prompt Describe the largest diaspora in your world. Why did they leave their homeland?

An excellent article, but special mention goes to the fun as heck header of "Toddlers & Time Warps"

Thanks Q! As always, you're the best!

'Toddlers and Time Warps' sounds like it'd make a great reality tv show. :D   This is really fascinating. I love the idea that areas of time manipulation are used to make childhood go quicker (though presumably it doesn't feel quicker to the children).

Thanks! There's some really good fodder here for future campaign ideas. I'll be going through to add in quotes and edits after my first WorldEmber burst of inspiration passes.

I really enjoyed this article. loved the imagery and all the lore around the children. Really interesting concepts~

Ooh, this is a really nice article! I love the idea behind it, its a really creative solution to the slow reproduction rate of the elves. Great work!!

Thanks, I really love how the prompts are shaping my world. Best part is, my players are interacting with these guys tomorrow!

Ooh thats great!! Speaking of, how did they react to meeting that old lady?

They loved her! I used my old Filipino lady accent the entire time and gave each character individualized fortune-telling. It was a lot of fun! Also, she handed out snacks that turned out to be consumable (literally) magic items!

Oooh that does sounds like a lot of fun, I'm really glad they loved her!

Listening to Janet and Dimi read this on the World Anvil stream, and really enjoying both the article and their commentary. Nice work!