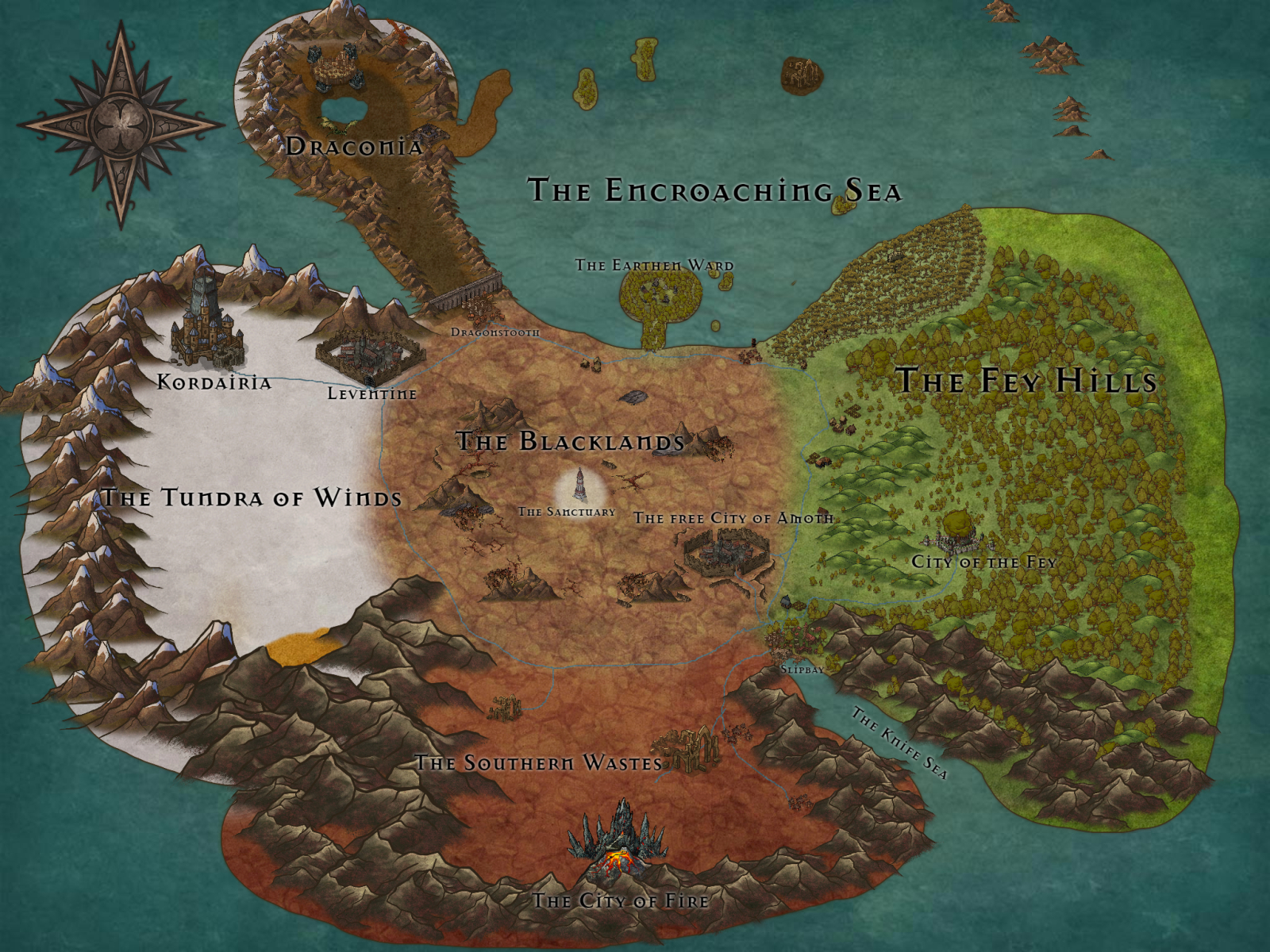 Elemental Continent of the Sunder

Koria is the largest of the more northern continents in Vel'Kora. It hosts high mountain ranges, snowy tundras, deep forests and barren wastes, as well as species and cultures that have thrived in each.       It is home to the majority of the fallout from The Sundering, as well as seat of all four of The Elemental Gates.

In the north-northeast of the continent lies The Encroaching Sea. A massive body of seawater, this region differs from the great sea in the rest of the world due to its unnatural existence, owed to The Elemental Gate of Water which resides somewhere within its treacherous depths. Once a land of valleys and lakes, this place is now a vast ocean held in place by the will of an ancient power, and a ring of mountains that used to encircle the region.

Also commonly refered to as Draconia, is place of mystery for most of the continent. In the year 150 AS, near the end of The Sundering, the Gods Bahamut and Tiamat were unable to put aside their hatred for one another and and fought, tooth and claw, to the death. Their bodies fell somewhere in the northern mountains of the then Dwarven Kingdom of Runedar. Within ten years of their death, the Dragonflights of all types within Koria unified as one single force and pushed forward with a drive to recover the bodies of their fallen Gods and brethren. They swarmed into the Dwarven Kingdom, wreaking astonishing havoc on the Dwarven people who stood defiant to their invasion. Over the course of a bloody three years, the Dwarves were driven out of their ancestral home, escaping to the deepest of their mines, constantly fleeing sneaking Kobold raiding parties. Some years after what was known as the Orrobon was overcome, the still unified Draconians established formerly the Kingdom of Draconia on the remains of the Dwarven homelands and promptly shut themselves off from the world. In modern days, the city of Dragongate is the only glimpse any outsider has to their world.

The Tundra of Winds

The only tundra of the continent, The Tundra of Winds sprawls as a massive plain of barren snow and cold winds nestled between the high mountains to the far west of the continent and one of the few remaining mountain ridges in the center. Travelers of this region speak of the ever present winds blowing east from the gaping Gate of Elemental Air, known to occasionally spawn treatcherous winter storms that appear out of nothing. The great city of Kordairia lies to the Northwest. One of the oldest, and largest, cities on the continent, it is unique in the fact that due to the Gate sitting directly above it, most of its inhabitants are Air Genasi, the Humans that founded the city being slowly replaced generation by generation from its raw elemental influence. The Avariel and Aaracroka call its heights home as well, as well as a large colony of Rock Gnomes. The entire city itself is also watched over and protected by the floating temple of Aaqa, ruled by the mighty Vaati. Nestled near the northeastern entrance sits the former Human city of Leventine, now the new home of the Dwarven people after their expulsion from their homeland. Outside of the stone walls of the two great cities, roving clans of Goliath can be found wandering the tundra, fighting the Trollkin along the shore of Lake Pagos. Clans of Tabaxi are also known to wander the wastes, hunting the great herds and trading with those who are willing. The Shadowwaste sits in its southern corner, a strange place of shadows, said to be leaking from the Plane of The Shadowfell itself.

Once the Plains of Daw Aldhahab, it is a barren tract of scorched land and ruined cities. Once the main bastion of Human civilization on Koria, two of the three city states that resided in this region were destroyed during war caused by The Sundering, burned to the ground and gutted by the fanatical followers of Imix. Its landscape is now dominated in the south by the massive fortress city of the Al Feer, the City of Fire, where the Eternal Flame cult now dwells, quietly solidifying their iron grasp on the region. The mountains to that encircle the barrens flatlands are dotted with small mining towns, full of those eager, or desperate enough, to break their backs mining riches from the deep. The Doa Gate sits tucked in the mountains in the southeastern mountain range. While the Elemental Gate of Earth doesn't reside in this region, it is one of the few other stable Gates to the Plane of Earth in the world, and is used and guarded by the Dao, whose precious gems and rare metals from their fortress in the Inner Plane are processed and sold by slaves captured from The Material Plane. While Al Feer and the Dao Gate are fundamentally opposed, a soft truce exists between the two due to the value each brings the other in trade

Made up of thick verdant forests nestled between The Fey Hills to its west and north, and the mountain range of Geata Talun, The Feywelden is a mystical place seemingly caught between two Planes. Ruled by High Elf Houses in The City of the Fey who see the region as an extension of their home in The Feywild, it is fiercely protected from those who seek to harm or misuse its wild and abundant resources. Ancient towers belonging to The Caomnior Glas dot the green forests, as well as small villages and towns under the care of The City of the Fey. Many Halflings can be found along the Eastern edge of this green paradise, tending wide fields of crops which they exchange for protection from their Elvish patrons. The Elemental Gate of Earth lies somewhere in Geata Takun range along the southern border, protected by a small but dedicated cult hoping to rediscover and awaken the Archomental Ogremoch. Sitting along the only known road that runs through the region, the town of Slipbay, last and only safe port on the entire continent, acts as a place of trade and parley between the Elves of The Feywelden and those outside its borders. While they do not seek conflict, often preferring to remain detached from the rest of the world, conflict with Al Feer is a constant occurrence. While not great enough to lead to all out war between the two, the animosity is enough to rally either side to arms against the other given the chance.

The Blacklands sit in the very heart of the continent. Once a lush region of pine forests and soaring mountain ranges, it was both home to The Sundering, and saw the lions share of the fighting after the event took place, and the raw power used to combat the forces of the Archomentals shattered it beyond repair, turning it into a mix of blasted desert badlands, shattered mountains, scorching sand dunes, and bleak stony hills stretching for hundreds of miles in any direction. Ancient ruins can be found throughout, remnants old Moon Elf kingdom of Tela'thanir, as well as towns and villages of those hardy, or brave enough to seek a living in this unforgiving land. Bands of Human mercenaries, warring clans of Orcs and Goblinoids, and packs of feral Gnolls make travel throughout the region dangerous at best. The only real true place of safety in the region can be found in the Free City of Amoth, shining jewel of The Blacklands. This Mercantile Republic acts as both a neutral middle ground between the various other faction on the continent, as well as the beating heart of all trade on the continent. It is said all things can be found in Amoth, be they legal or not.

Several creatures and races can be found only in Koria, such as the Avariel and Eladrin Elves. It also boasts the highest population of Genasi in the world, due mostly to the Elemental Gates, and the highest number of Djinn.   Also due tot he influence of the Feywild, there are several cuttings of the Tree of Souls that grow deep in the forests in the east of the continent.

Koria is astonishinly rich in mineral resources due to the influence of the Elemental Planes, as well as the portals to the Feywild.   Mines in the southern mountain ranges consistently pull out massive quantities of high quality iron, copper, silver and gold ore, as well as deep running vains of precious gems. Lumber is also of a high quality in Koria thanks to the Feywilds' influence and careful tending by he Elves.