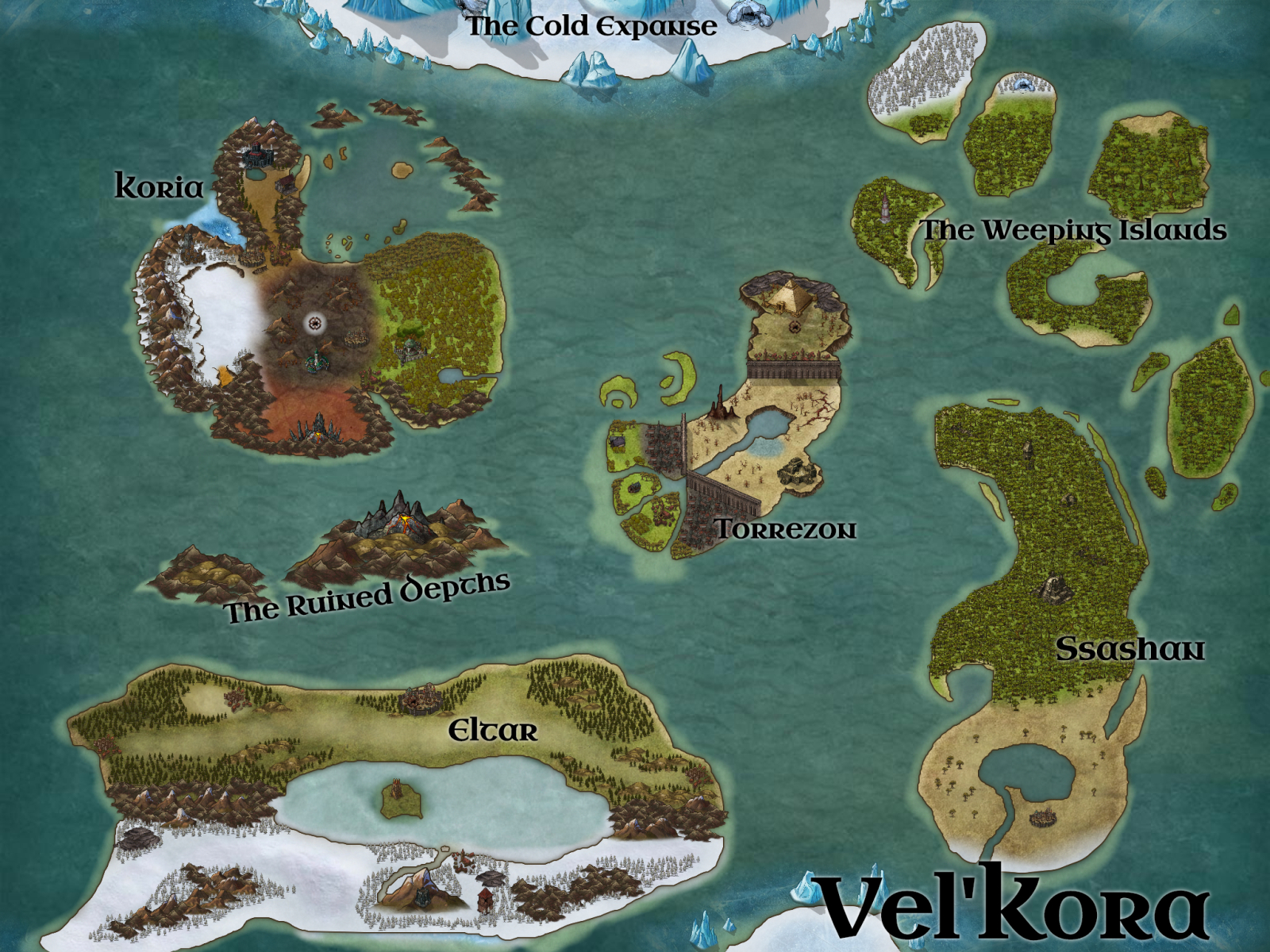 Rome
Vel'Kora is a Material Plane of existence within the Grand Cosmos. It is surrounded by the Inner Planes of the Feywild, Shadowfell, Ethereal, Fire, Water, Air, and Earth.   The world, or sphere, was created an uncertain time long ago, and the sphere lay somewhat dormant until the arrival of the elder deity Annam All-Father who reshaped the world to his liking, creating the continents we have today.   Much has changed on the surface of the sphere since then. The old empire of the Giants was crushed and sank into the ocean to create the barren island chain called The Ruined Depths. The Tosculi empire was scattered and simply fled underground in Torrezon. Dwarven kingdoms rose and fell in Eltar and Koria. Elves migrated from the Feywild to settle in Koria, Eltar, The Weeping Islands, and Ssashan. Humanity rose in Ssashan and grew to settle across the entire world, setting up empires in Torrezon and Eltar, and free city states in Koria.   In Koria, a dark event known as The Sunder caused a massive breach of the Elemental Planes into the Material Plane, ripping open portals into those dangerous places, and unleashing elder evils that sought to claim the continent for themselves, destroying entire regions, and killing gods before eventually being stopped.   In Torrezon, the old Valcoran Empire was nearly crushed by their rival to the south in Eltar, until their empress made a pact with a being of deep darkness and ancient secrets. Now, she rules as an all but immortal demi-goddess over an empire that covers the continent, her iron fist held in place with her religion military order, and ruthless attitude towards the outside world.   Eltar was once the greatest empire on the face of the earth, or so they claimed to be. They valued reason and alchemical discovery, and advanced themselves further than any other group had before the events in Koria. Now, it is a ruined husk of its former glory, contained to a few outlying duchies and one singular massive city in the northern half of the continent for which it was named. Magic is outlawed in the lands the empire still controls, and rumors spread of the atrocities that those with the gift of the arcane suffer and its almost inhuman militant orders who serve their emperors will without hesitation.   Ssashan was the birthplace of humanity, and witnessed both its first corruption at the hands of powerful reptilian Gods, and its first downfall. The Yuan-ti whose empire claimed this continent are now an almost forgotten relic of the past, hidden deep within the jungles, holding deeply to their ancient rituals, and plotting for a return to power. It is the south of Ssashan where the new power lies. A union of Minotaur, Giff and Loxodon built a mighty city, and are slowly increasing their hold on the continent one day a time.   The Weeping Islands and The Cold Expanse are the last unexplored places in the world, at least according to current histories. One is an archipelago of verdant jungle islands, whose inhabitants are said to be territorial and dangerous enough to keep others away unless the absolute need arises. The other is a frozen wasteland, reportedly uninhabited, but rumored to hold treasures so powerful and dangerous that they were sealed in the ice fields forever.   I do not own or claim to own any images used. If you are the owner of any images used here in and would like it removed, please let me know and I will be happy to take it down.
Vel'Kora Discussion Boards

The first part of the Torrezon Campaign