Dwarves are hearty folken who enjoy working hard and playing hard. Often seen as boisterous drunkards by outsiders, they simply have a deep appreciation for fermented food and drink, at least as deep of an appreciation as they have for quality stone and metal crafts. Dwarves are also frequently associated with short tempers and strong work ethics, though these traits vary by individual. One thing that doesn't is a dwarf's loyalty to his clan and family. If a dwarf ever calls you his brother, feel honored, for he means it.

Mountainfolk, sometimes called dwarves, are the broadest and tallest of the smallfolk. They have dense, thick bones and most have naturally thick musculature, giving them a stout appearance.

Mountainfolk are one of two particularly hirsute folken, along with the @valleyfolk. In both genders of mountainfolk this is shown in thick, durable hair that grows rapidly. Male mountainfolk also have a tendency to grow long, luxurious beards which they adorn, style, and care for.
Mountainfolk tend to have light colored eyes in the blue and green spectrum, round faces, strong jaws, and prominent noses. Hair colors also tend to be fairer, generally in the reds and blondes. Darker hair in mountainfolk is usually a sign of interbreeding with other folken in that mountainfolk lineage.

Toward other mountainfolk, a dwarf will show respect and even deference if older. However, toward any other species a dwarf may be respectful or rude, or anything in between, depending on their mood and individual personality.

For mountainfolk, cloth is considered a luxury material. Most wear leathers augmented with metal. While these clothing items have an appearance like armor, they are often thin and more decorative than true armor, and thus provide little to no protection in battle.
It is considered low brow, even scandalous, to be seen with any part of the leg or foot exposed.

Dwarves have strong ties to family, both present and past. It is a common practice to have a professionally kept family tree that goes back many generations, highlighting connections to past rulers and heroes. Children are expected to honor their parents above all others, and because of this arranged marriages are a common occurrence.
One's ancestors are also a prominent focus of mountainfolk cultural life. Most households have a space dedicated as a shrine to revered ancestors. Even dwarven gods are actually considered simply mighty ancestors, and noble families will claim to be able to trace their lineages back to one or more of the gods.

Since mountainfolk culture surrounds family and honoring one's ancestors, most mountainfolk find disturbing burial sites to be extremely distasteful, no matter who or what is interred in the site. More conservative mountainfolk also consider interspecies relations to be taboo, as they believe in keeping bloodlines 'pure'.

Mountainfolk are generally not accepting of interspecies relations due to societal pressures. Most of the time if a dwarf enters into a romantic relationship with another species their name is stricken from their clan, effectively making that dwarf an orphan. 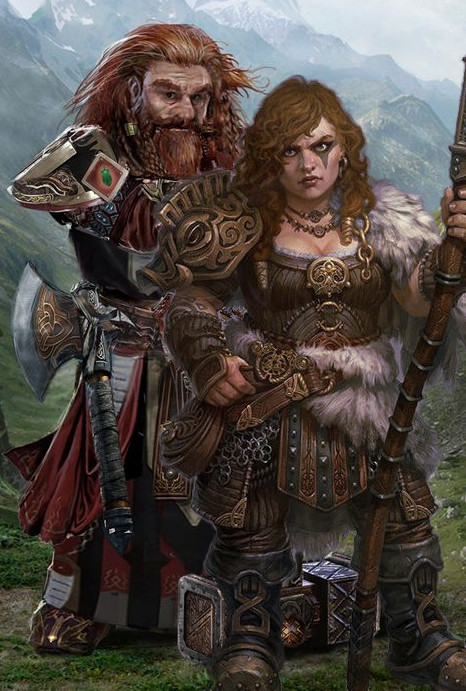 Genetic Ancestor(s)
Scientific Name
Homo correptus validus
Average Height
4 ft. - 5 ft.
Average Weight
150 lbs.
Body Tint, Colouring and Marking
Thanks to being around the soot of forges, the dirt and dust of the underground, and the heat of lava flows, mountainfolk have a generally tanned look to their skin, despite rarely spending time in the sun. The exception of this is mountainfolk nobility, who are almost always fair-skinned.
Smallfolk
All copyrights belong to the original creators of the works both artistic and written featured herein. Credits given where possible.  Original works are copyright Michael Plowden.

As a mountainfolk, you’re strong and hardy, accustomed to a difficult life in rugged terrain. You’re probably on the tall side (for folken), and tend toward lighter coloration.
Mountainfolk Combat Training. You have proficiency in light and medium armor, and with the battleaxe, handaxe, light hammer, and warhammer. Wearing heavy armor does not reduce your speed.
Mountainfolk Toughness. You gain advantage on Constitution saving throws against the poisoned condition, and are resistant to poison damage.
Stout. Your size is considered Medium for the purposes of wielding weapons, wearing armor, engaging in and resisting grapples and movement effects, and carrying capacity and encumbrance.
Strength of Mountains. Your Strength score is considered 4 points higher for the purpose of carrying capacity and encumbrance.