Fairies are frequently joyful and want to spread that joy, especially to those that look like they need it. After all, we all live in a world filled with such wonders and life, what's not to love? Sadly this has earned them a reputation for capriciousness, even malicious trickery at times. Most fairies though wouldn't harm a hair on someone's head unless they've shown themselves an enemy of the land. That doesn't mean they are above stuffing someone's socks full of beaver droppings if that someone has been quite mean to them.

Forestfolk, sometimes called fairies and not to be confused with the fey, are the shortest of the folken. They also have naturally occurring coloration that has an appearance similar to tattoos, and their skintones vary from caucasean to greenish to ruddy.

Forestfolk most of the time have teardrop shaped faces with pointed chins. Eye colors can range from icy blue-white to green to golden to brown. Their hair naturally grows so that it falls back away from their faces and can be any shade of blue, green, golden, or brown, including coppery-red. Males grow facial hair, though generally more along the jaw and chin than on their necks and cheeks.

Sexual dimorphism in forestfolk is slighter than in most other races. Both genders are built roughly similarly in body shape. This has led to a single gender ideal for both genders equally. Attractive markings, bushy hair, and a nimble build are sought after for both males and females.

Courtship with a forestfolk is tricky, as it involves literal tricks. Fairies bring their capricious nature into courting rituals and will play pranks with their partner, attempting to elicit joy, as forestfolk wisdom states that couples who laugh together stay together.

Fairy relationships are very different from fairy courtship rituals. A relationship with forestfolk can be described as extremely 'lovey-dovey'. They dote on their partners and seek constant contact and displays of affection. This behavior appears to be needy or codependent to non-folken, but in reality it is a simple expression of the love the forestfolk has for their partner.

It is common etiquette among fairies to give a gift to newly met people. This is most often a natural object, and something of little monetary or practical value. Common gifts include smooth pebbles, tiny wildflowers, a neat leaf, or a feather.

Forestfolk tend to dress eccentrically, and so really anything is permitted as long as it makes the person happy. There are a few forestfolk that prefer to wear no clothes at all, though for the sake of outsiders will generally don loose robes and such when leaving their communities.

Forestfolk culture focuses on two areas strongly: bringing and experiencing joy, and being a part of the natural world around them. They can naturally communicate with the denizens of the world, and doing so is as natural to them as breathing. They hold a deep, protective respect for the land, and will often go out of their way to prevent it from coming to undue harm. The pure happiness being in tune with nature brings to them, fairies like to share with others through the acts of jokes and pranks. This makes them seem capricious and chaotic to others, but their joviality isn't spiteful or mean.

Forestfolk have no qualms about relations with other folken or other species whatsoever, taking a 'if it makes them happy let them do it' approach to such matters. 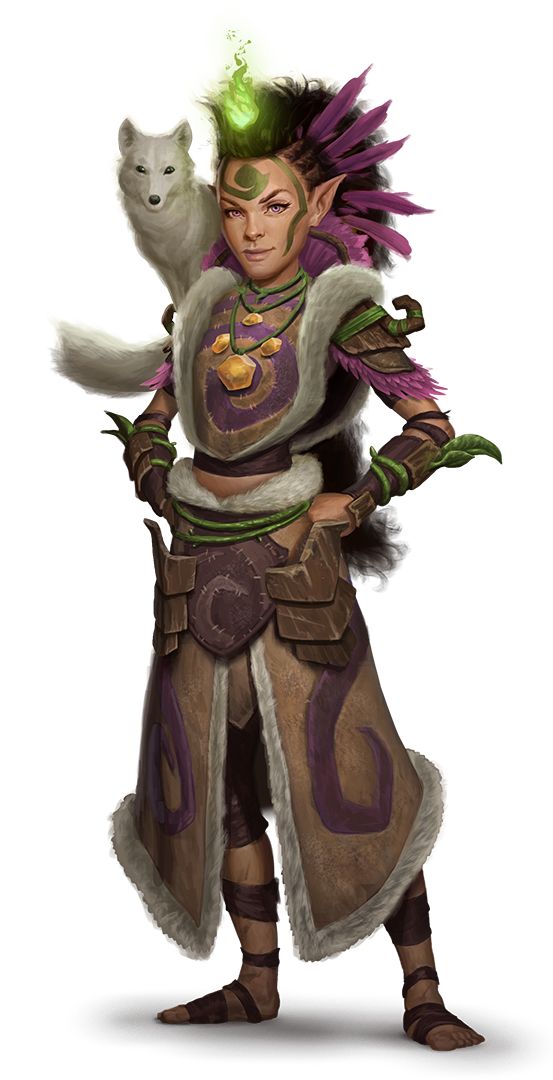 Genetic Ancestor(s)
Scientific Name
Homo correptus silvestris
Lifespan
400 years
Average Height
2.5 ft. - 3.5 ft.
Average Weight
35 lbs.
Body Tint, Colouring and Marking
Fairies have skintones that mirror their connection to the natural world. They can be pale like the underbelly of a fish, tinged greenish, of even a ruddy red-brown. All forestfolk have natural markings on the skin of their faces, limbs, and back. These can be anything from a mirror of an animal's markings, such as a leopard's spots, to intricate spirals or other designs. There are forestfolk that do not have such markings, but they are very rare.
Smallfolk
All copyrights belong to the original creators of the works both artistic and written featured herein. Credits given where possible.  Original works are copyright Michael Plowden.

Faeries gain traits fitting to their slight form and tricky nature.
Alignment. Almost all forestfolk are chaotic due to their ideals of freedom and enjoying life being at the forefront of their desires. Though forestfolk can be selfish and petty, they rarely go so far as to become evil.
Fey-Like Mind. You have advantage on saving throws against being charmed, and magic can’t put you to sleep.
Fairy Magic. You know the cantrip dancing lights. At level 3 you gain the ability to cast cure wounds once, and at level 5 you may cast invisibility once with this trait, and regain the ability to cast these spells when you finish a long rest. Charisma is your spellcasting ability for these spells.
Speech of the Woods. You have the ability to communicate in a limited manner with beasts. They can understand the meaning of your words, though you have no special ability to understand them in return. You have advantage on all Charisma checks you make to influence them.