Kook. Nutjob. Screwball. Strange. Crazy. These are common terms used to describe gnomes by non-folken. The truth is just that gnomes have a different thought process than most other species, which is why they are such great inventors. Often finding themselves getting lost in their work, gnomes rarely hear these criticisms, and even more rarely care when they do. When you have the secrets of the universe at your fingertips, maybe a little crazy is a good thing.

Hillfolk are the second shortest of the smallfolk. They have slightly larger heads proportionate to their bodies than most other species, and in particular their eyes are a little bit larger than average. This is to accomodate the increased visual information their larger than normal prefrontal cortex, housed within the larger head, processes to give them the attention to minute details that hillfolk have.

Hillfolk are a meritocracy, ruled by the most accomplished scholar or inventor. Every four years the Great Symposium is held in which candidates for President demonstrate their inventions, philosophies, treatises, or other scholarly work. These are then voted on in several categories by the attendees, which are comprised of aldermen and scholars, until a new government is elected to lead. This means that scholarly pursuits are held in the highest regard in hillfolk culture, while more physical labors are seen as less desirable occupations.

Hillfolk have generally triangular-shaped heads with pointed chins and small, button noses. Their eyes are proportionally larger than most other humanoid species' eyes, like those of owls and noctural animals.

Hillfolk have extra large, sensitive eyes that are adept at picking out fine details others might miss. This doesn't make them any better at extrapolating information from what they find, only actually finding things. Due to this, hillfolk have a tendency to stare intensely at others in a way most people find uncomfortable.

Hillfolk names are unique, as they are constantly being added on to. A gnome may have a sectional name, one that reads more like a book than a name. In addition to this, hillfolk are named by their mothers at birth, given a family name, and often earn nicknames from nearly everyone they meet. And they keep every single name they’ve earned.
Example Name: Atisket Scheppen, inventor of the Automatic Backscratcher, furmother of Foofy the Pug, accidental arsonist.

Clean, fair skin as well as large and clear eyes are the most notable characteristics hillfolk use to determine beauty. Petite hands and feet are another sign of beauty, and females often decorate their fingernails with colors and designs as a way to draw attention to their hands.

Physical stature isn't as important to hillfolk as it is to most other humanoids. Rather, along as everything physically is generally symmetrical, their gender ideals are most prominently mental in nature. Both males and females are equally seen as exceptional partners if they display a cognitive advantage over competitors.

As complicated as hillfolk tend to make everything else, their relationships are refreshingly simple. Honesty and passion are the two more fundamental hillfolk ideals for a lasting relationship.

The hillfolk are a step ahead of the baseline technological level of their Fragment. By admixing their natural curiosity, capability with fine detail work, and big brains, the hillfolk have spawned an entirely new discipline that they've dubbed artifice.

Hillfolk have a peculiar blend of artistry and practicality in their cultural works. Art should provoke and inspire viewers, but should also have a practical function. Thus their inventions tend to have a certain beauty to them, even if it's a beauty only another gnome could appreciate. Complexity and minutiae are seen as pinnacle indicators of high art, and rare is the piece of hillfolk art that doesn't have several hidden subjects, compartments, meanings, or functions.

Hillfolk have no mores regarding relations with other species. As with their society, they are meritocratic with relationships: the most qualified should be your partner. 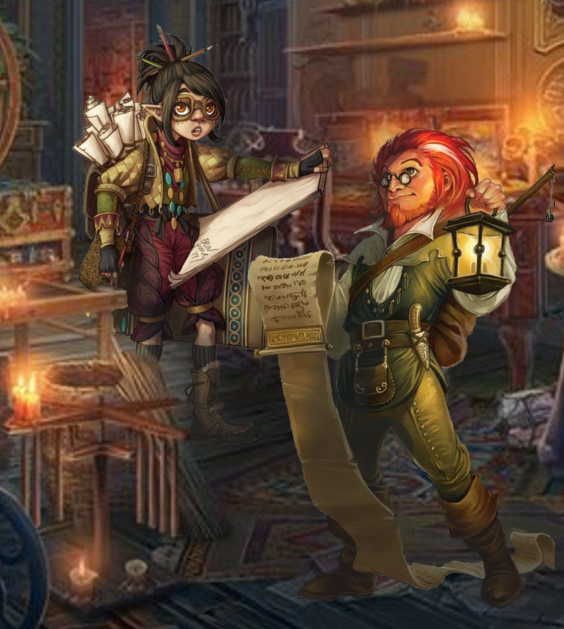 Genetic Ancestor(s)
Scientific Name
Homo correptus ingeniosus
Average Height
3 ft. - 4 ft.
Average Weight
40 lbs.
Body Tint, Colouring and Marking
Hillfolk eyes and hair colorings run the gamut of light to dark. An oddity of hillfolk physiology, possibly caused at some point in the distant past by a technomagical mishap, allows their hair colors to be shades of pink and purple in addition to the normal blondes, redheads, and brunettes.
Smallfolk
All copyrights belong to the original creators of the works both artistic and written featured herein. Credits given where possible.  Original works are copyright Michael Plowden.

As a hillfolk, you have a natural inventiveness and hardiness beyond that of other smallfolk.
Artificer's Lore.::Whenever you make an Intelligence (History) check related to magic items, alchemical objects, or technological devices, you can add twice your proficiency bonus, instead of any proficiency bonus you normally apply.
Tinkerer.::You have the ability to cobble together the right combinations of science and magic to created a technomagical device. Doing so requires an hour of time and 50gp worth of materials, both per rarity of the item. At level 1 you can only create Common items. You can create Uncommon items at level 6, Rare items at level 11, and Very Rare items at level 17. A tinker's item only lasts for 24 hours before it loses it's potency, breaks, or otherwise self-destructs. Created items with charges have 1d4 + Int modifier worth of charges. You may only have one created item at a time using this ability. You can keep the same item from one day to the next, but you still must pay the gold and time costs to repair and maintain it.
Scientific Theory.:: You gain proficiency in your choice of Arcana, History, Nature, or Religion.
Technobabble.::By prattling on and on about how the inverse flux of mechano-abjurative matrices interpolate with the asynchronous dipolarism of electric technomagical circuitry, you can bore someone into a deep sleep. You can cast the sleep spell as a 1st level spell using your Intelligence as the spellcasting ability score. This is not a magical effect, and so is not subject to resistance to magic or sleep spells, and functions in dead magic zones. Your target(s) must be able to hear you and must possess at least one language in order to be affected by this ability, although they do not need to understand the language you are speaking. You must complete a long rest before you can use this ability again.